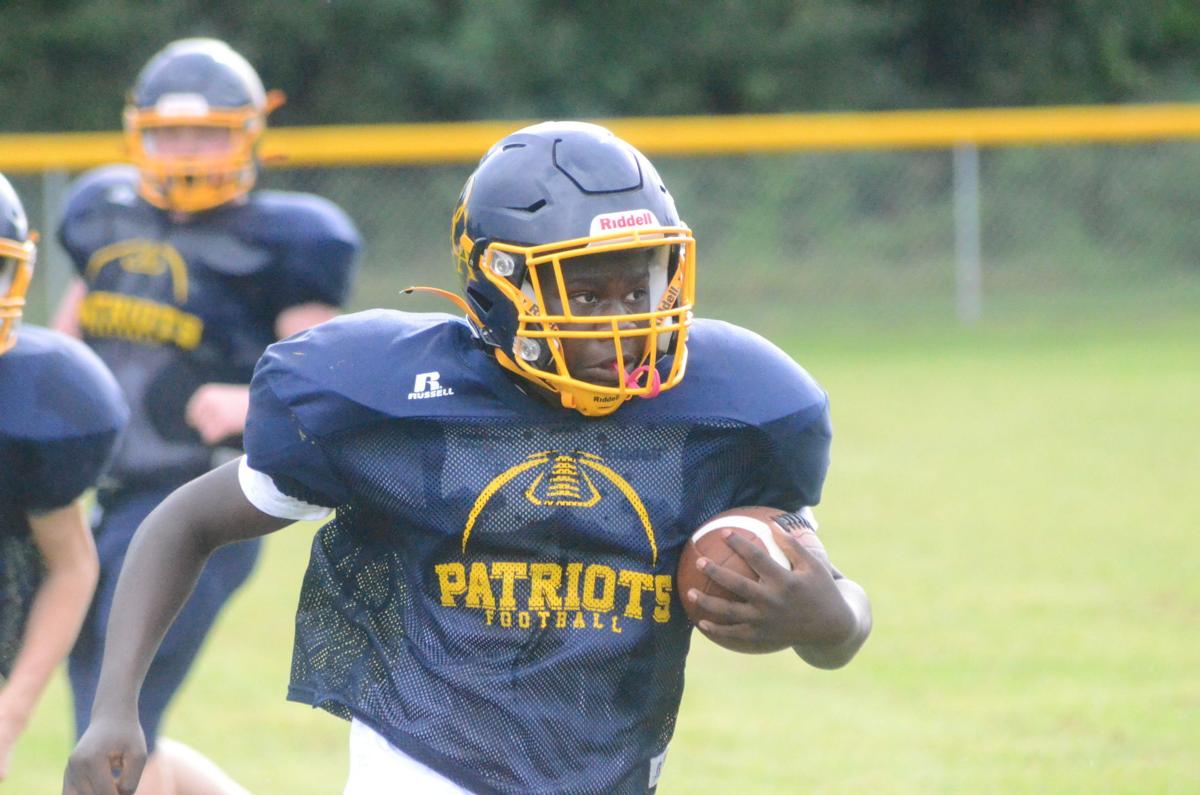 Orangeburg Christian Academy running back Ferninan Hamilton carries the ball during practice Wednesday. The Patriots are scheduled to play their first-ever game Friday at Coastal Homeschool. 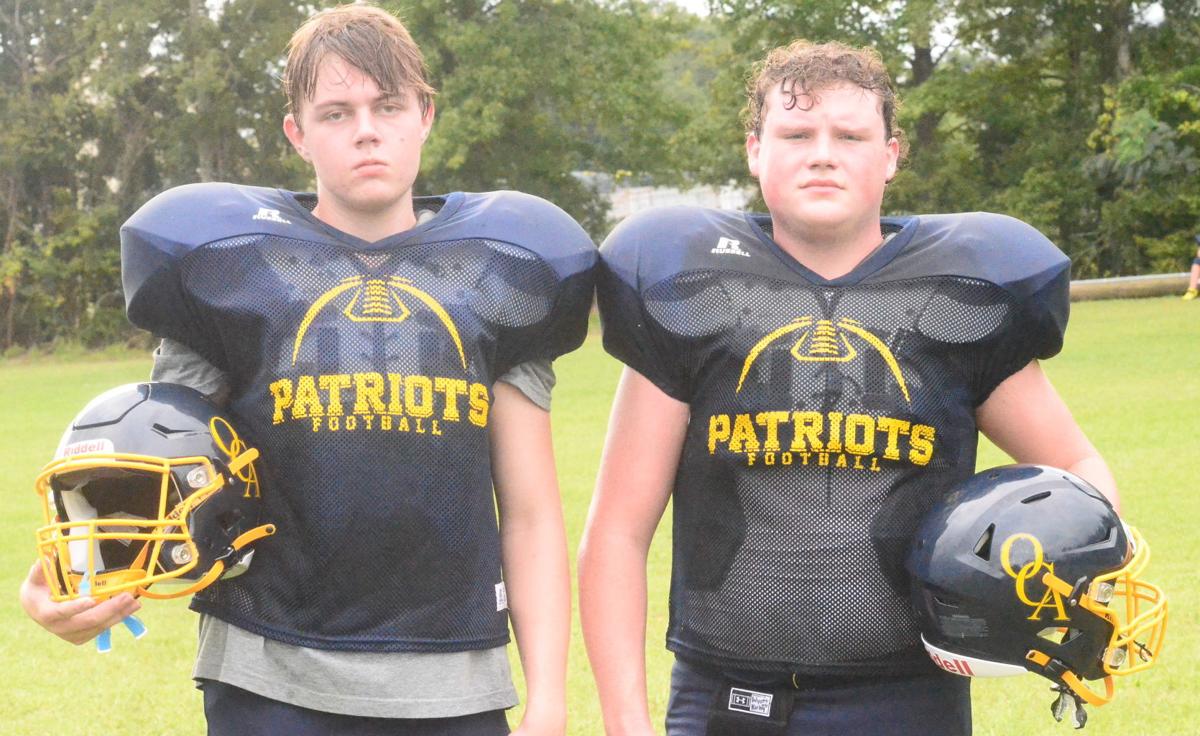 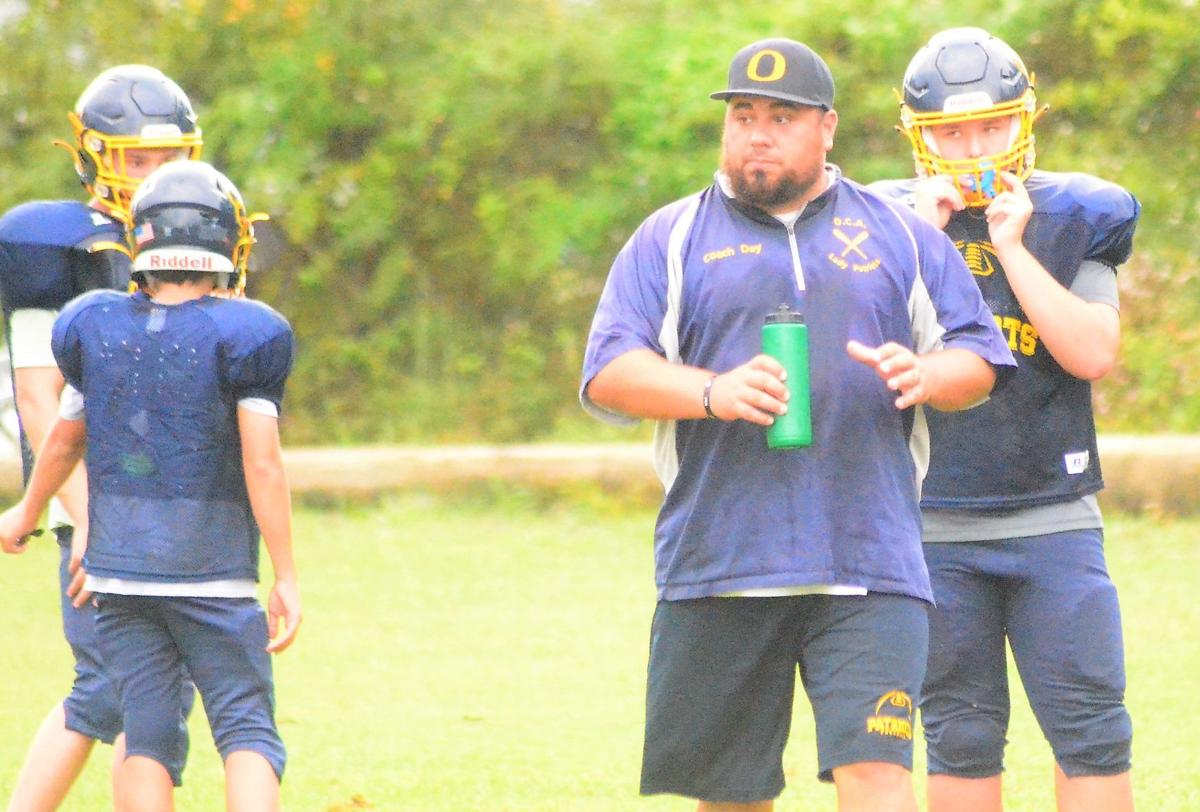 Orangeburg Christian Academy head coach Anthony Day talks with his team during practice Wednesday. Day said it will be a "dream come true" when his team takes the field for the first time in school history Friday against Coastal Homeschool.

Friday night, Orangeburg Christian Academy will field its first football team in the 25-year history of the school.

The Patriots will be led by head coach Anthony Day.

“It’s a dream come true,” Day said. “It’s been an absolute two-year push trying to start this program. I went to the principal and said we need football. Those life lessons that you learn on the field, you take with you off of the field.”

Day said he would provide the leg work and has spent the last two years traveling and talking with representatives to get his team in the best possible position.

“Now, to be able to take field on Friday night, for the first time ever in the school’s history, no other team will be able to say that,” Day said. “That’s the buzz we have right now.”

Day and the Patriots were scheduled to kick off two weeks ago, but like other teams around the state, COVID-19 forced a shutdown.

“We’ve been in protocol for about three weeks,” Day said. “We played in a jamboree at Jefferson Davis, then the next week we had to shut down. Those three weeks hurt us. We had all that momentum from spring practice, going into summer. These guys sweated, bled and cried for this opportunity, then not to be able to take the field was hard.”

Day compared it to a balloon that had lost all of its air.

Junior Wyatt Kirby said it was disheartening when the team got the news of the cancellation.

“It was Thursday, and we were prepared to go out and play our first game the next night,” Kirby said. “That’s when they called us and said that school was canceled the next week along with all practices and our first two games.”

Kirby credits Day and the other coaches for their persistence in allowing the Patriots to have this first season.

“(Coach Day) has fought very hard to get this team set up for us,” Kirby said. “When we all found out we were going to be able to play football, it was all in. He’s worked really hard for us and I’m glad to be a part of this first football team at OCA.

“We’re just trying to re-inflate the balloon,” Day said. “We try to bring high energy to everything we do. High energy stretches, to kick offs to punt returns everything is high energy. Our coaches are trying to get in there and motivate these kids and keep them prepared for Friday night.”

At many places, coaches will look to the seniors and other upperclassmen to take a leadership role when things don’t go as planned. Day has one senior, Hunter Grubbs, along with Kirby, who are taking on that role.

“Neither of these guys has ever played football before, but they both bring that sense of senior leadership,” Day said. “Wyatt is a great leader and Hunter is always hustling, picking guys up and being supportive. It’s awesome to see.”

Grubbs, who has played basketball and baseball for the Patriots, said it’s a great honor to be representing OCA.

“I love playing football, and I love playing for OCA,” Grubbs said. “I just wanted to celebrate my last year as the first senior to ever play football here. Hopefully we’ll have a great season, win some games, get to the playoffs and win a state title.”

While his team has high aspirations for a state championship, Day said he just wants to see his team play with a "not give up attitude."

“I want them to understand the luxury they have with this team,” Day said. “This is a privilege, not something that you just get. To finally be able to take the field, after many hours of work done behind the scenes, I hope and pray they don’t take it for granted.”

Kirby said his only expectation was to have fun.

“We want to give glory to God,” Kirby said. “That’s who we play for, but I also plan to go out there and win.”

An old adage says “a week is an eternity in politics."

It was far from a "Yabba Dabba Doo" time at Alumni Stadium for South Carolina State.

Orangeburg-Wilkinson's football team has won back-to-back region games and finds itself in a four-way tie for first place in Region 5-AAA.

HIGH SCHOOL FOOTBALL: Cavaliers try to wrap up the region

Clemson head football coach Dabo Swinney said his offense is in a funk.

Orangeburg Christian Academy running back Ferninan Hamilton carries the ball during practice Wednesday. The Patriots are scheduled to play their first-ever game Friday at Coastal Homeschool.

Orangeburg Christian Academy head coach Anthony Day talks with his team during practice Wednesday. Day said it will be a "dream come true" when his team takes the field for the first time in school history Friday against Coastal Homeschool.