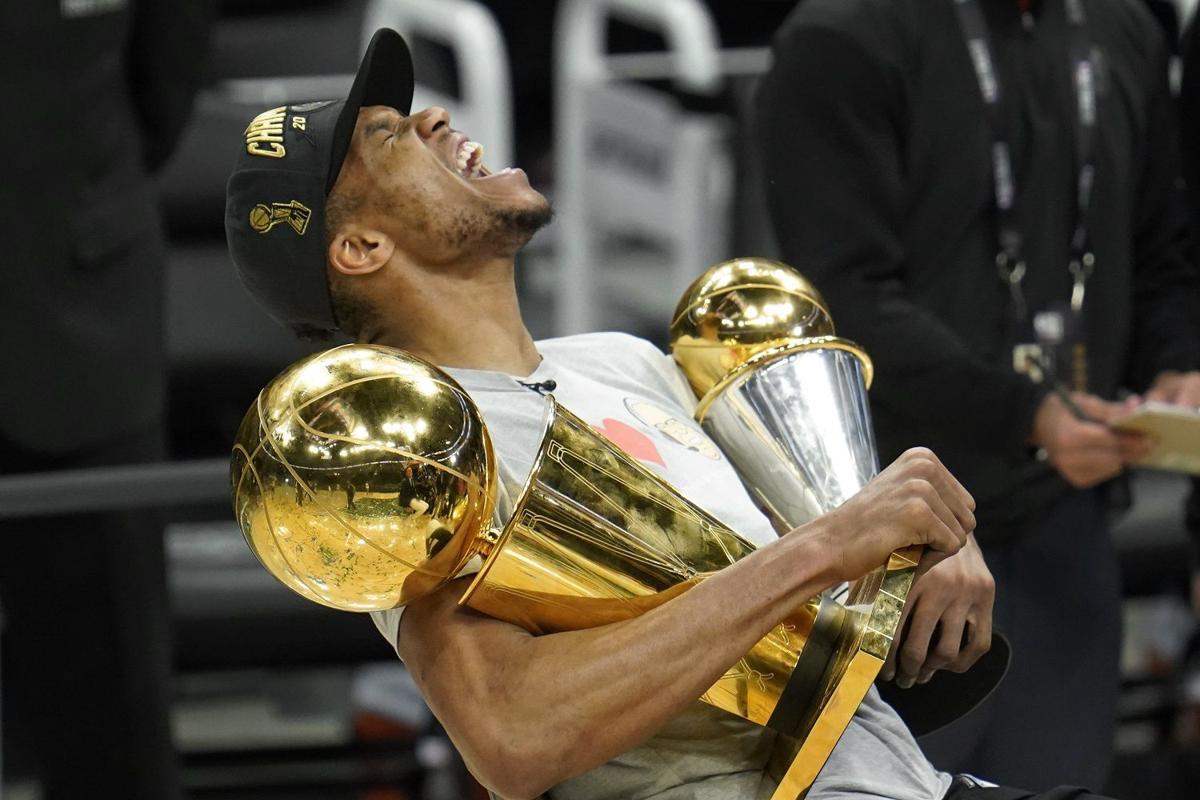 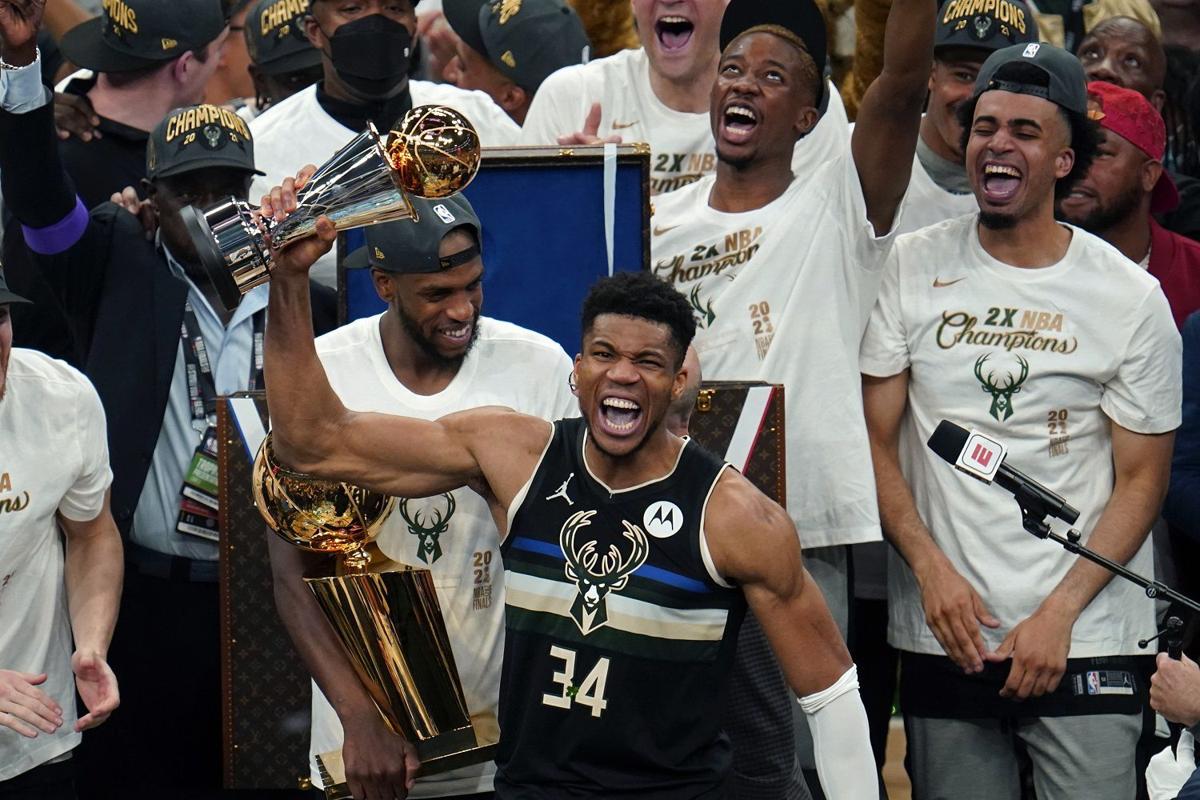 MILWAUKEE — Three weeks ago, a knee injury left Giannis Antetokounmpo looking 50/50 to return for the rest of the Bucks' playoff run.

Look at him now.

The Greek Freak delivered perhaps the best performance of his career at the best possible moment and can now add an NBA Finals MVP award to his two regular-season MVP trophies. Antetokounmpo scored 50 points in a series-clinching 105-98 Game 6 victory that ended the Bucks' 50-year title drought.

A half century ago, it was Lew Alcindor — before he was Kareem Abdul-Jabbar — earning the MVP honors for the Bucks by averaging 27 points and 18.5 rebounds in a four-game sweep of Baltimore. This time, it was another big man leading the way as Antetokounmpo became the first player to average 35.2 points, 13.2 rebounds and 5.0 assists per game while shooting 61.8%.

He followed that up by saying how his improbable rise to stardom should serve as a inspiration to others.

"Believe in your dreams," Antetokounmpo said. "Whatever you feel, when you feel down, when things don't look like it's going to happen for you or you might not make it in your career – it might be basketball, it might be anything Just believe in what you're doing and keep working. Don't let nobody tell you who you can't be or what you can't do."

Antetokounmpo was an easy choice for the MVP honor after also adding 14 rebounds and five blocks in Game 6. He had at least 40 points and 10 rebounds in three of the six games in this series.

He did all that while dealing with a hyperextended left knee that prevented him from playing in the last two games of the Eastern Conference finals against the Atlanta Hawks.

Antetokounmpo initially feared the injury was more serious and would keep him out of action for an entire year. He instead was back on the floor a week later for the start of the NBA Finals.

Then he played major roles in the two signature plays of this series.

First he blocked Deandre Ayton's dunk attempt to prevent Phoenix from tying Game 4 with just over a minute left. And after Jrue Holiday made a steal with the Bucks protecting a one-point lead in the final minute of Game 5, the 6-foot-11 Antetokounmpo raced down the court and was on the receiving end of Holiday's alley-oop that helped clinch the game.

He saved his finest outing for the championship clincher, scoring nearly half the Bucks' points.

Antetokounmpo collected 20 points in the third quarter alone to help Milwaukee rally from a 47-42 halftime deficit, though the game was still tied 77-all heading into the final period.

He had 27 of the Bucks' 48 total points through the game's middle two quarters. And after making just 55.6% of his free throws in his first 20 games of this postseason, Antetokounmpo went 17 of 19 from the line Tuesday night.

"It's hard to find more words to describe what Giannis does," Bucks coach Mike Budenholzer said. "But the way he made his free throws, the way he did everything, stepped up, the poise, the confidence, the leadership. He has been working on it. We say we want Giannis to get to the free throw line. We believe. We talked about it this past summer. To win a championship, you've got to make free throws and you've got to make shots."

Antetokounmpo's rapid recovery to lead Milwaukee to it first title since 1971 represents the crowning achievement in Antetokounmpko's remarkable rise to NBA stardom.

The 26-year-old Antetokounmpo noted this week he hadn't even started playing basketball in 2007, when LeBron James made his first finals appearance. His rare blend of size and athleticism made him the No. 15 overall pick in the 2013 draft, and he made his first All-Star appearance four years later.

He earned back-to-back MVP honors in 2019 and 2020 while leading the Bucks to the league's best regular-season record each of those years, but they kept falling short in the playoffs. The Bucks blew a 2-0 lead to Toronto in the 2019 Eastern Conference finals, then lost to Miami in the second round.

Antetokounmpo kept his faith in the Bucks by signing a supermax extension in December.

"There was a job that had to be finished," Antetokounmpo said.

He acknowledged getting too caught up in the emotional swings of each win and loss earlier in his career. He stayed more level-headed this year while also emerging as a more vocal leader.

That strategy allowed the Bucks to erase 2-0 deficits in the second round against Brooklyn and again in these finals. It helped Antetokounmpo deal with the uncertainty in the immediate aftermath of his injury.

And now it has him on the highest of highs as the MVP of a league championship series.

'This is going to be team 2021': Palmer, OPS glad to be back on football field

T&D Region football is right around the corner.

The Orangeburg-Wilkinson Bruins and head coach Kevin "Butch" Crosby have high expectations for the 2021 season.

SAITAMA, Japan — A'ja Wilson insists she's just one of the newcomers on the U.S. women's national team, "one of the young guns" trying to soak…

The South Carolina State University football team will report to camp on Thursday, Aug. 5, and begin practicing on Aug 6.

Biles was the defending Olympic champion in the vault. Plus, get the latest on the games tonight.

Lawrence gets 'plus, plus' grades, 'real stuff' next

JACKSONVILLE, Fla. — As impressive as Jacksonville Jaguars quarterback Trevor Lawrence was during his first week of training camp, his perform…

Simone Biles wins the bronze medal on balance beam after returning to competition at the Tokyo Olympics. See snapshots from her medal-winning routine.