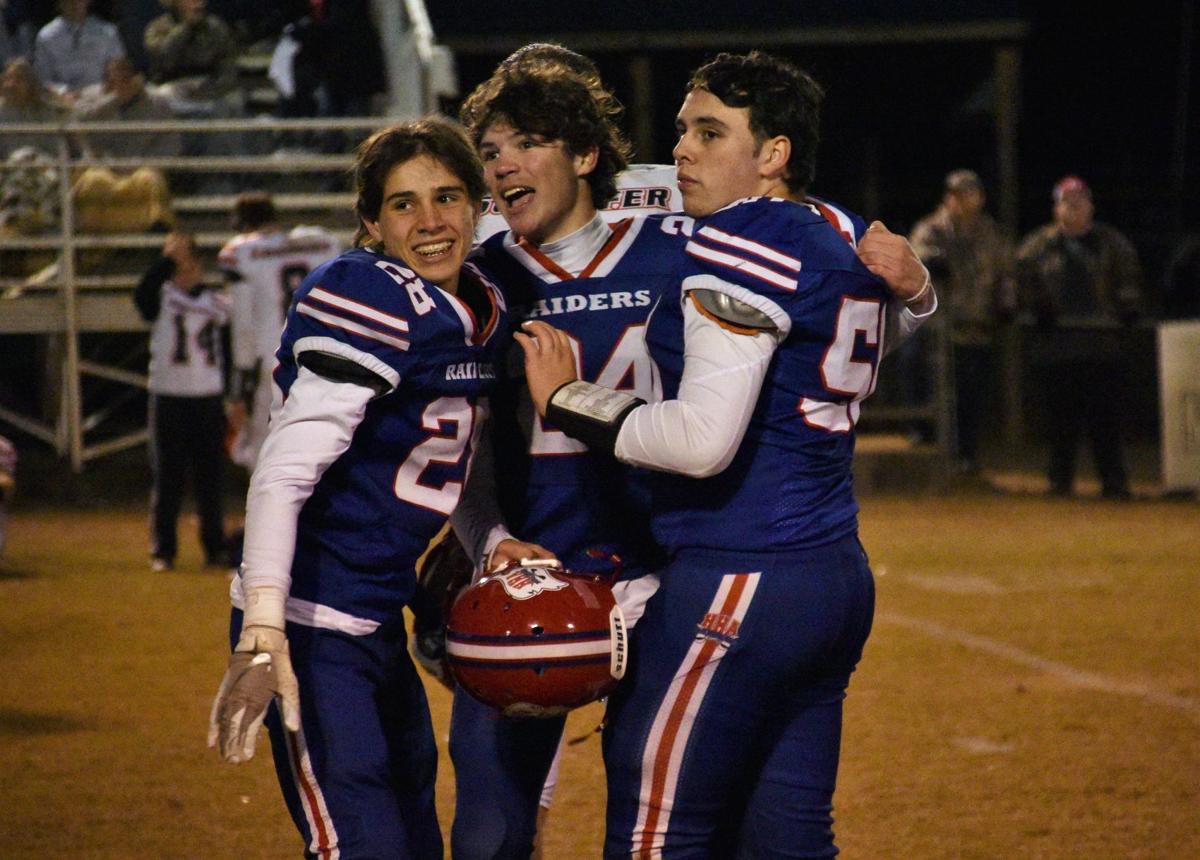 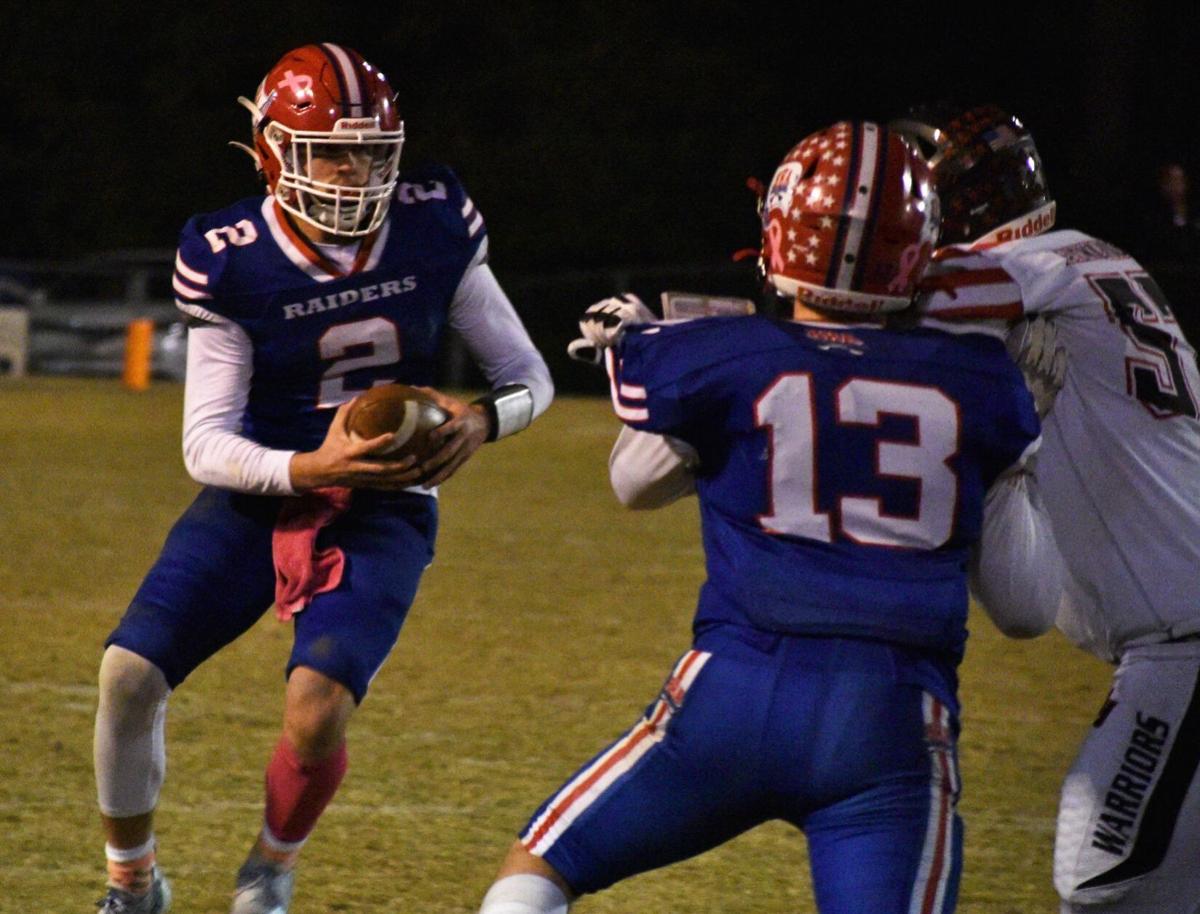 It is the second straight state title for the Raiders, who got 109 yards rushing on 17 carries, two rushing touchdowns, 33 yards receiving, a receiving touchdown and a fumble recovery from junior Tyler Wright.

After a 4-touchdown first quarter, both defenses settled in and held back scoring for much of the final three quarters.

But a score by the Warriors in the final minute, along with the recovery of an onside kick with just seconds left, made for an exciting finish to a title game.

“These guys just worked their butts off all year and this staff is awesome,” HHA head coach Michael Nelson said. “We have seven seniors on this team and the team plays together like a band of brothers.

“All year long, our guys never backed down to anybody. They gave their best, and tonight our best happened to be the best tonight. We forced five turnovers tonight, and that was the difference in the ball game. We’re here and here to stay. A lot of these guys have played since they were freshman, and that experience showed tonight.”

Quarterback Jacob Rogers (4–of 10 passing for 33 yards and a touchdown) opened the scoring for HHA with a 26-yard touchdown pass to Wright on a 4th-and-11 play in the first quarter. After a penalty on the first conversion attempt, a pass play was no good, leaving the score 6-0 with 7:23 left in the opening period.

On the ensuing possession, AJA lost the ball two plays in, as Chase Carson fumbled and Perrin Breland recovered for HHA on the Warriors’ 36-yard line.

It only took the Raiders four plays to reach paydirt again. Wright carried the ball on three of those plays, including a 2-yard scoring run. After another incomplete pass on the conversion attempt, the score was 12-0 with 5:27 left in the first quarter.

A good kick return set up the Warriors to answer with their first score of the game. Quarterback Bug Brunson finished a 40-yard drive with an 18-yard scoring run with 3:12 left in the period. A false start penalty forced AJA to have a second conversion attempt, which ended without points, leaving the score 12-6.

Holly Hill Academy used 5 takeaways to their advantage against Andrew Jackson Academy on Nov. 19 at Calhoun Academy, holding off the hard-char…

HHA got creative to set up its third touchdown, with quarterback Jacob Rogers pitching the ball to Marion Breland in the backfield, before Breland delivered a pass to Rogers at the Warriors’ 28-yard line. Rogers took the 43-yard play to the 1-yard line. Wright scored the following play, and added the 2-point conversion run for a 20-6 lead with 1:28 left to play in the first quarter.

“This is big, and it felt like we were in control most of the game,” said Marion Breland, who led HHA with 16 tackles, and carried 6 times for 29 yards of offense. “It hurt us not having (recently injured) Davin Walling at defensive end. But, we got on them early and it changed the game.

“We’re used to scoring 60 or 70, but we knew this would be a lot tougher to score. Our game plan was to only throw if we had to. Our goal was to get most everything on the ground tonight.”

The Warriors posted the only points of the second quarter early in the period. AJA scored on a 53-yard drive that started in the first quarter and lasted 10 plays. The key play was Brunson connecting with Moye Brandt on a 22-yard pass play. The scoring play was Brunson keeping the snap and running in from 16 yards out with 7:59 left in the second quarter. HHA stopped Brunson on the conversion run, leaving the score 20-12.

The following two possessions ended with lost fumbles. David Johnson knocked the ball out of Rogers’ hand before an attempted pass on a 4th-and-16 play on the AJA end of the field. Johnson also recovered the ball near the HHA sideline for the Warriors.

But, the AJA drive that followed ended in Raiders’ territory, when a snap went over Brunson’s head and Joe Hufham recovered the ball on the HHA 36-yard line.

AJA had a drive cover 44 yards to open the third quarter, and looked to be in position to attempt to tie the game. But, Carson Cone lost the ball on a run play and Wright recovered for the Raiders on the HHA 14-yard line.

AJA forced HHA to punt after just three plays, and used the good field position to set up a 42-yard scoring drive. Brunson found Brandt over the middle of the HHA defense for a 28-yard passing touchdown. Brunson run was stopped on the conversion attempt, leaving the score 20-18 with 1:39 left in the period.

The Raiders answered with a 5-play scoring drive that covered 48-yards and ended early in the fourth quarter. Marion Breland connected on a 35-yard pass play with Rogers (2 receptions for 77 yards), who was uncovered along the HHA sideline, but broke two tackles on his way to the end zone. Wright added the conversion run for a 28-18 lead with 11:48 left in the game.

Perrin Breland intercepted a fourth-down pass from Brunson to end the Warriors’ next drive. But, the Warriors made the stop and forced HHA to punt for the second time in the game. Harley Watkins punted into the end zone, not giving AJA a chance to make a return. The Warriors then went 80 yards for the final score of the game. Brunson connected with Brandt on a 4th-and-15 play to reach the 5-yard line, before Brunson found Cone for a touchdown pass from five yards out. The conversion pass was incomplete and the score was 28-24 with 15 seconds left to play.

AJA recovered the onside kick, but Watkins sacked a scrambling Brunson in the backfield to end the contest and the season.

“We made too many mistakes and the better team won tonight; our hats are off to them,” AJA head coach Chad Gleaton said. “They won because they executed, we didn’t; they played with poise, we didn’t.

“Tonight the team that won deserved to win. Not because they are better football players, but they played better.”

AJA has only lost 8 games since 2014, with 3 of those losses coming against HHA.

A SCISA champion was recrowned this past Friday at Calhoun Academy in St. Matthews.

Tom Brady talks about what he looks forward to in retirement