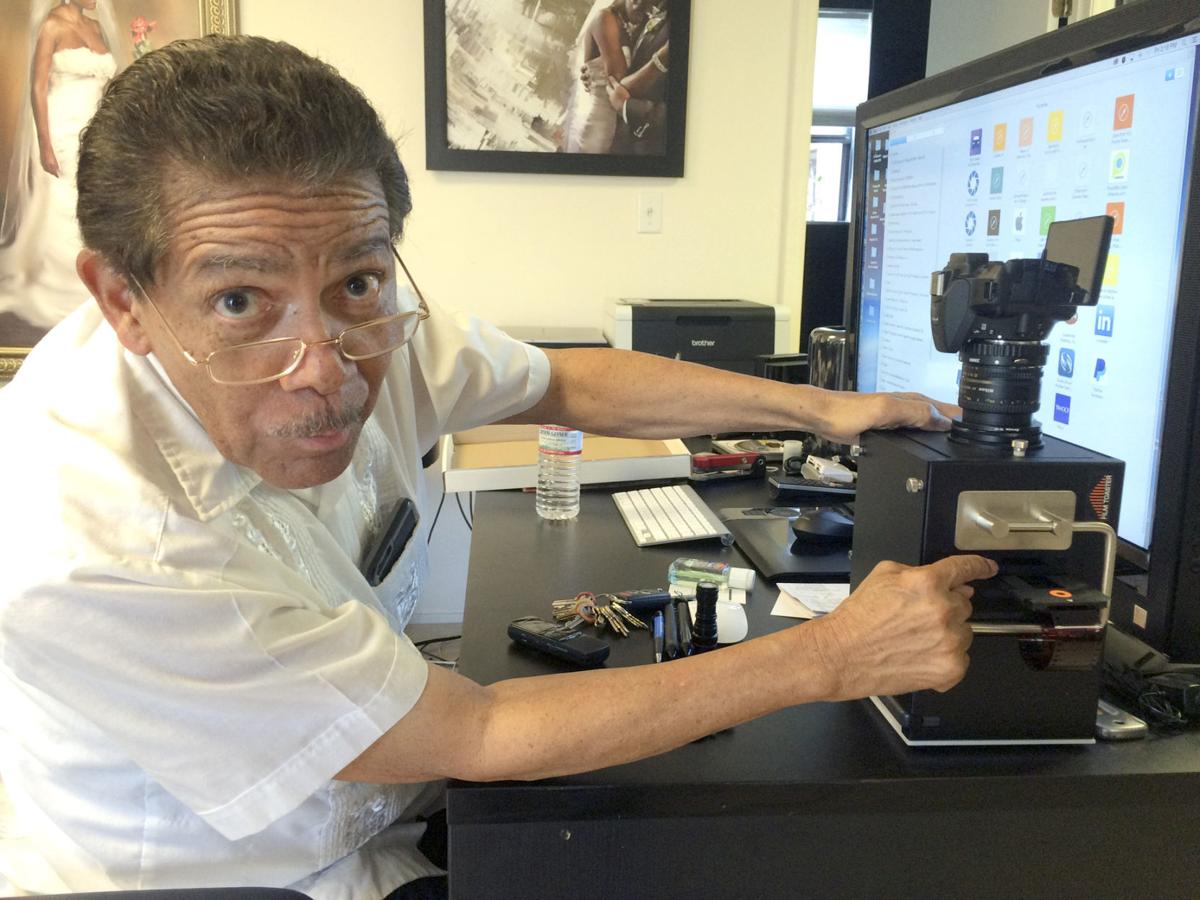 Orangeburg photographer Cecil Williams began taking photos in 1947 at the age of 9. Since then, he has accumulated approximately a half-million to a million negatives. When he realized that about 2,000 of his negatives were cracking, coiling and becoming damaged, he was driven to find a way to preserve them. As a result, he invented his FilmToaster. 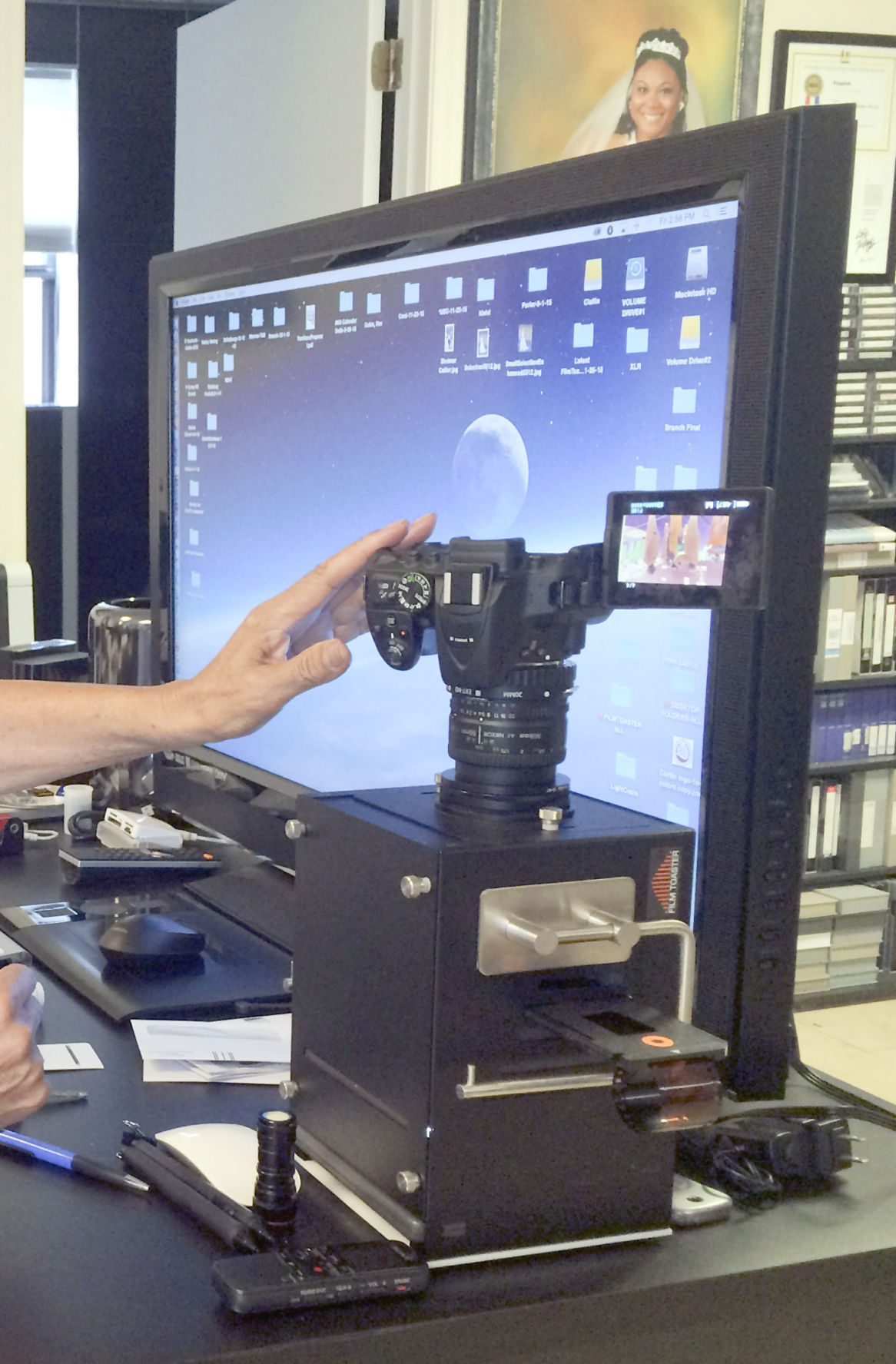 Cecil Williams' FilmToaster can take a photo of a negative in less than 5 or 6 seconds, preserving and converting the negative into digital format in less time than the flatbed scanner most photographers use. 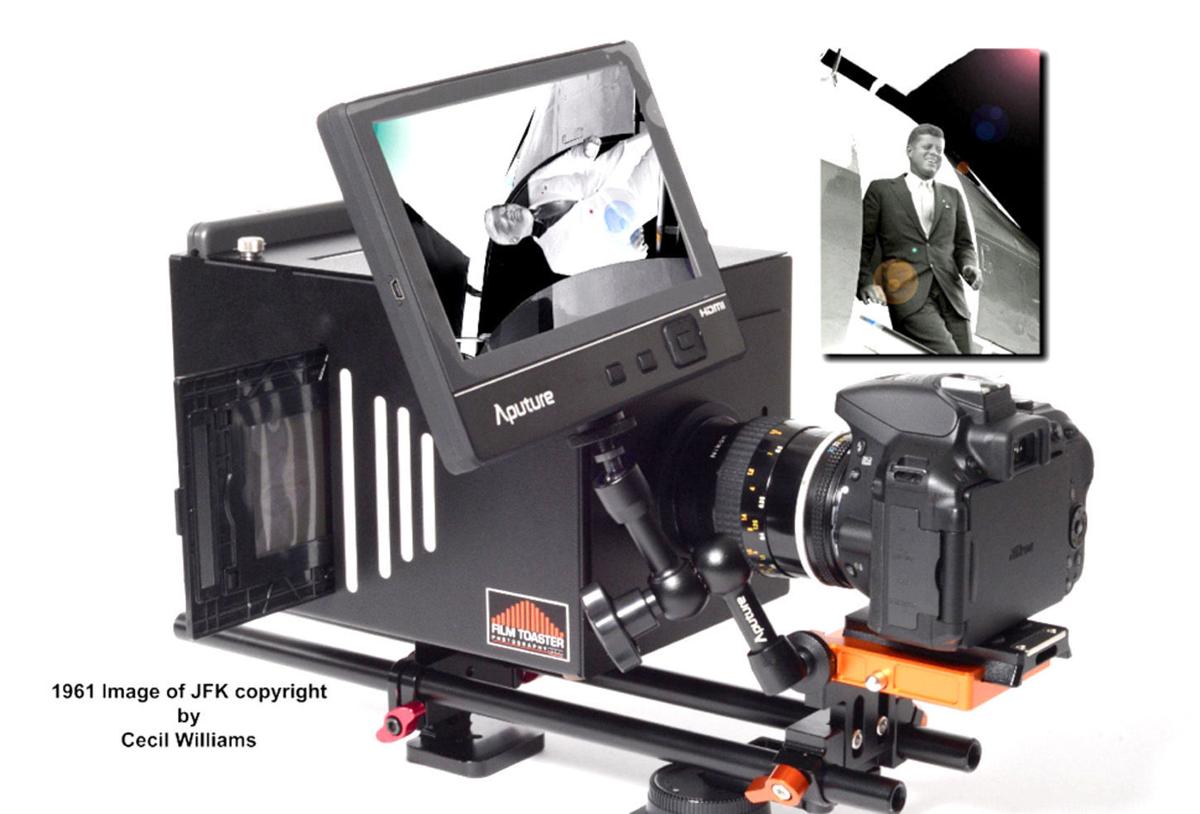 The FilmToaster is shown with accessories. 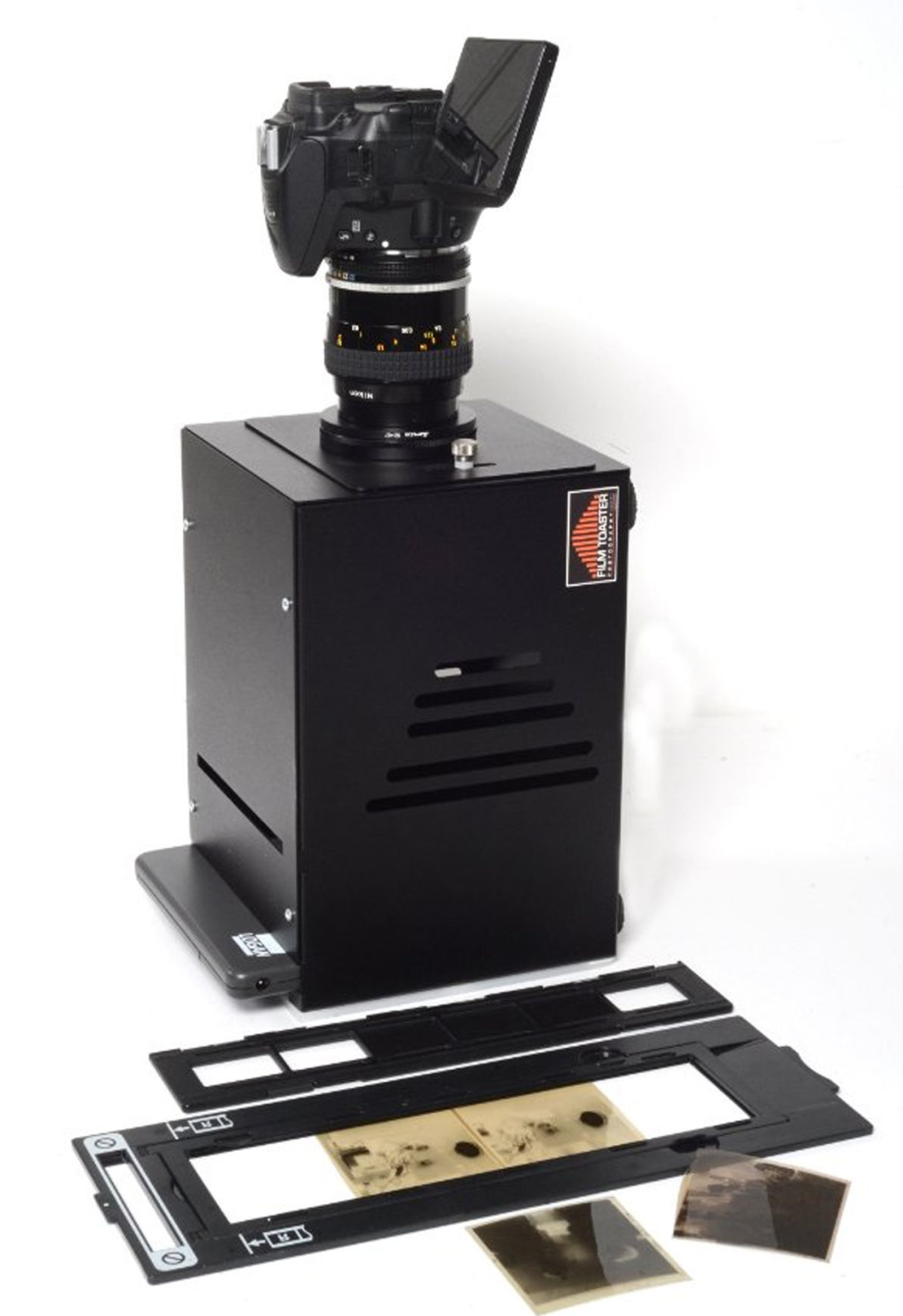 “A picture is worth a thousand words,” or so goes the old saying.

If that's true, an award-winning Orangeburg photographer's body of work over several decades speaks volumes about the history he has chronicled with his cameras.

Cecil Williams has captured once-in-a-lifetime moments dating back to the Civil Rights Movement. He is also an "inventor," with his most recent creation being a tool called the FilmToaster, which preserves negatives.

Williams, who has worked for JET Magazine and owns a photography studio, Cecil Williams Photography LLC, created the tool that enables users to put their film in digital format.

Williams began taking photos in 1947 at the age of 9. Since then, he has accumulated approximately a half-million to a million negatives.

He recently recognized that about 2,000 of his negatives were in peril. They had begun to crack, coil and become damaged.

“I was alarmed at the rate of the decline. This happens just like cancer. It spreads,” Williams said.

Each of the damaged negatives has to be discarded because they've dried out and can catch fire easily.

“As they become inflammable -- if I didn’t weed these out where all my other negatives are stored, it could be dangerous,” Williams said.

“Our heritage, our history, our legacy, our culture lies in someone taking the responsibility to save archives like my collection,” he said.

Williams was driven to find a solution to the problem in order to save his negatives. He began to experiment to find a less time-consuming tool than the flatbed scanner most photographers use.

“I got to thinking about it. I said, ‘Well, with today’s digital cameras, why not take a picture of (the negatives)?' " he said.

The FilmToaster takes a photo of the negatives in less than 5 or 6 seconds, preserving and converting the negative into digital format, which takes less time than the flatbed scanner.

“My product does it faster and with higher resolution. At the most, I don’t care how expensive you go with a flatbed -- it’s still limited to do about 10 or 8 or 6 megabytes. Wherein, if I take a 24- or 36-megabyte camera, I’ve then got a 24- or 36-megabyte copy of my negative. The more resolution, the higher the quality of it," Williams said.

His invention has "slots" that enable its users to put different sizes of film inside.

“It’s probably the only one in the world that does that. I can use 35 millimeter; I can use slide film; I can use medium format; I can even use 4x5,” Williams said.

A replaceable light source is used at the bottom of the FilmToaster.

“This whole unit is completely passive. It has no electricity within itself or any electronic components. Therefore, it won’t go out, neither will it become obsolete,” Williams said.

Williams compares his invention to "a horse, a saddle and a rider."

“The FilmToaster is the saddle because the camera can 'ride' on this device that I’ve created in this cozy environment in order to get a closeup picture and duplicate your negative," he said.

“Once your negative is digital, then you can put it on the computer. You can add metadata to it. You can use digital asset management software to further identify when it was or who it was in the picture.”

Williams debuted the FilmToaster at the New York Photo Expo in October. About 35,000 photographers attend the expo each year.

The FilmToaster is currently being sold online on Amazon, eBay and on Williams’ website at www.filmtoaster.photography for $2,399.

Within a five-month period, he has sold 63 FilmToasters. He uses Google Analytics to monitor the locations of his potential buyers.

Currently, the machine and its components (four film carriers) are made in Nova Scotia.

“Frequently, my customers have questions. I give support also, along with selling of the merchandise,” Williams said. “You have to know something about macro photography to be versatile with this.”

Creating the FilmToaster was about a six-year task for Williams. He is awaiting a provisional patent.

Williams also has created two other inventions during his career, but he did not patent them or follow through on them.

He markets the FilmToaster through his own developing list of potential buyers, such as museums, archiving places and photographers.

The FilmToaster has been mentioned in USA Today and has been described as the "Object of Desire" by PDN Magazine, an award-winning publication for the professional photography industry.

Williams has been appointed the director of Historic Preservation at Claflin University.

“We will have work-study students who will be working with the FilmToaster. They’ll be helping me scan my vast collection of negatives -- at the same time, gaining practical experiences," he said.

Williams was recently selected to receive the Herbert A. DeCosta Jr. Trailblazer Award for extraordinary accomplishments in his profession by the South Carolina African American Heritage Commission.

The award recognizes exceptional achievement by South Carolinians in the arts, science, government, economics and academics. Congressman James "Jim" Clyburn is also a recipient of the Trailblazer Award.

Williams, 78, says it has become extremely difficult to stay ahead in the photo and digital technology world because "everyone thinks they’re a photographer."

“However, I would call myself a real photographer. I go beyond what a lot of the instant picture-taking does today through cellphones and digital cameras,” he said.

“I think I stay ahead by doing things other people cannot do ... "

Williams calls himself the "Energizer Bunny," saying he doesn’t stop when it comes to his craft.

“I am passionate about history, technology, photography and art," he said. "I feel that in order to be good at something, you have to go beyond the ordinary amount of time that you devote to it to learn about it, become an expert in it and overcome the challenges that may come about.”

CHARELSTON -- A new exhibition of works by Orangeburg-based photographer Cecil Williams, known for his images of the civil rights movement in …

T&D's 2018 Person of the Year: Cecil Williams has chronicled life in Orangeburg, state for decades

A lifelong Orangeburg resident, he’s known widely as a talented photographer who chronicled the civil rights movement in the city and later pu…

Orangeburg photographer Cecil Williams began taking photos in 1947 at the age of 9. Since then, he has accumulated approximately a half-million to a million negatives. When he realized that about 2,000 of his negatives were cracking, coiling and becoming damaged, he was driven to find a way to preserve them. As a result, he invented his FilmToaster.

Cecil Williams' FilmToaster can take a photo of a negative in less than 5 or 6 seconds, preserving and converting the negative into digital format in less time than the flatbed scanner most photographers use.

The FilmToaster is shown with accessories.