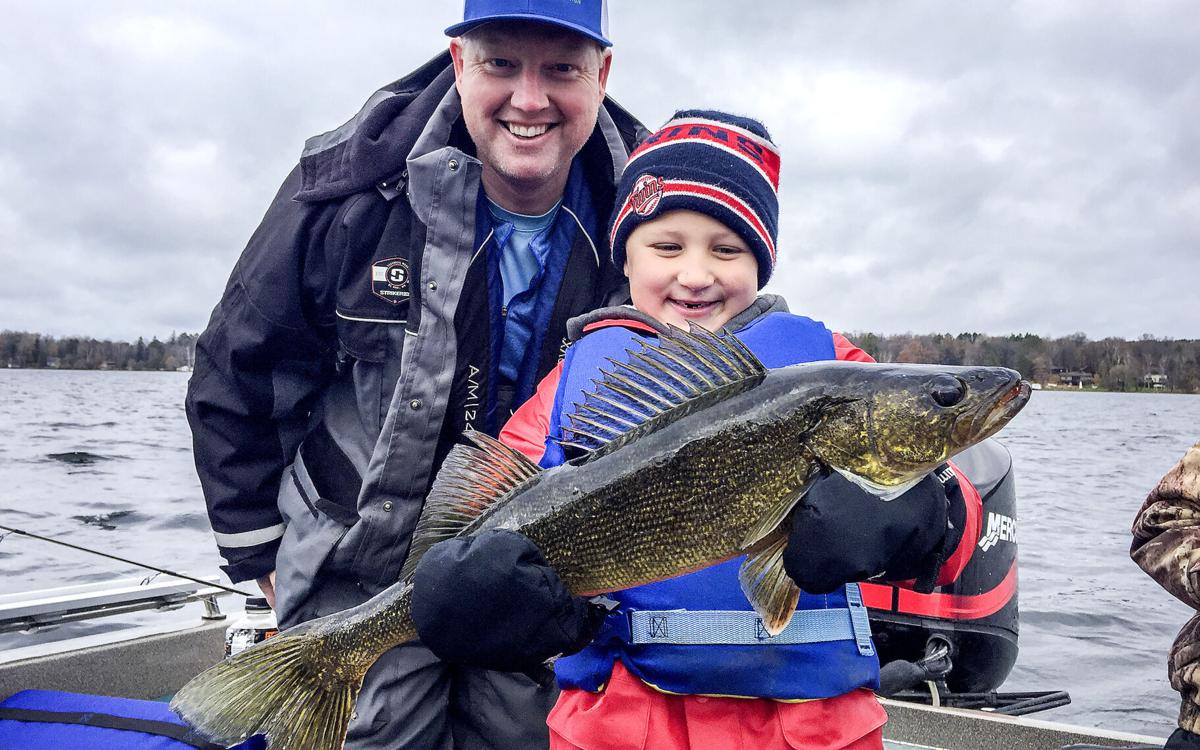 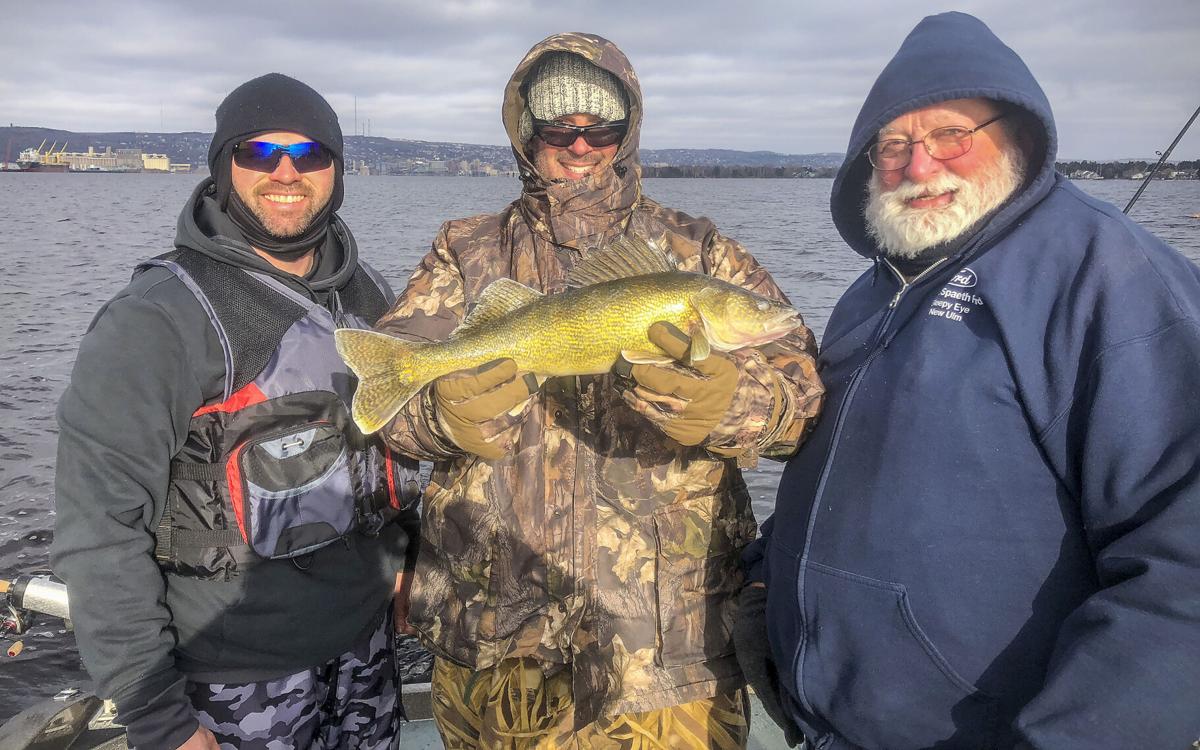 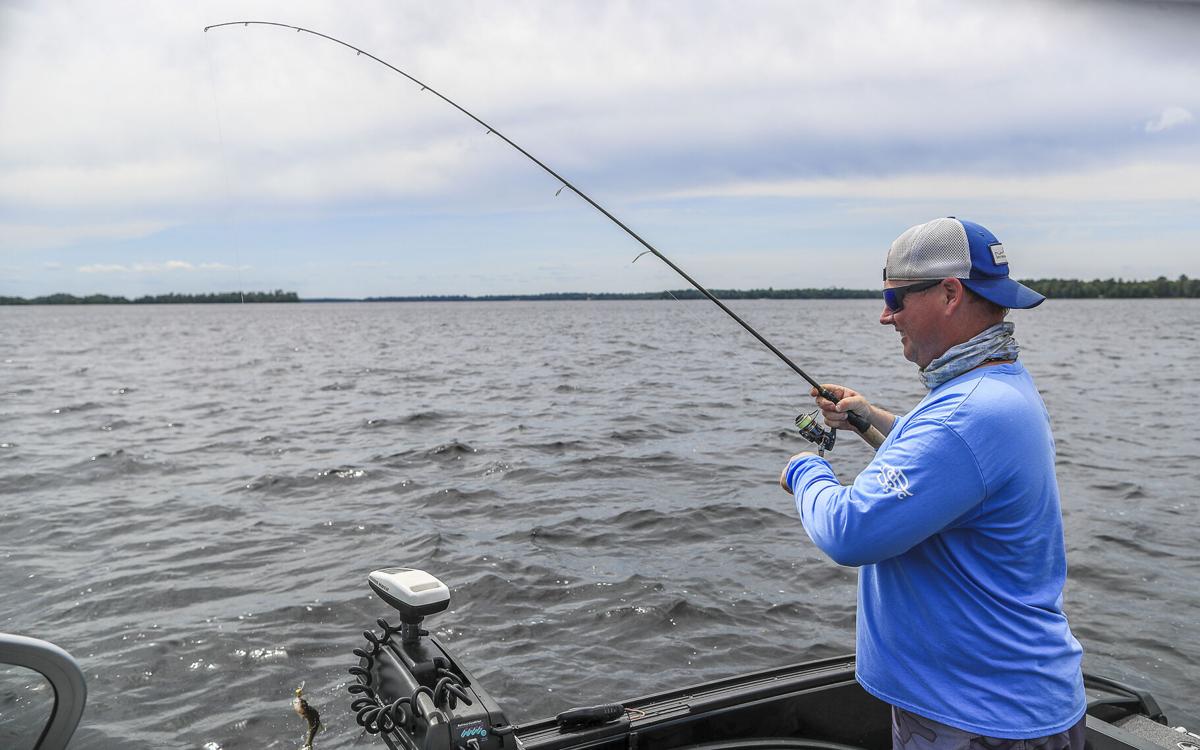 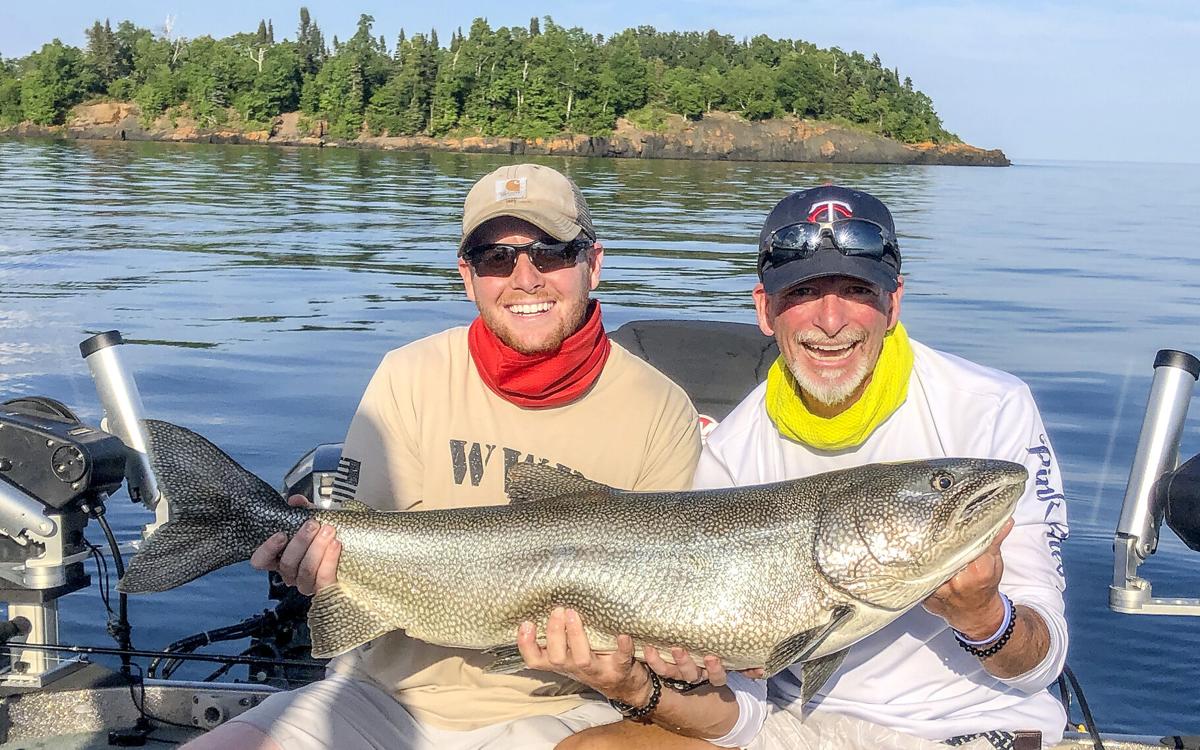 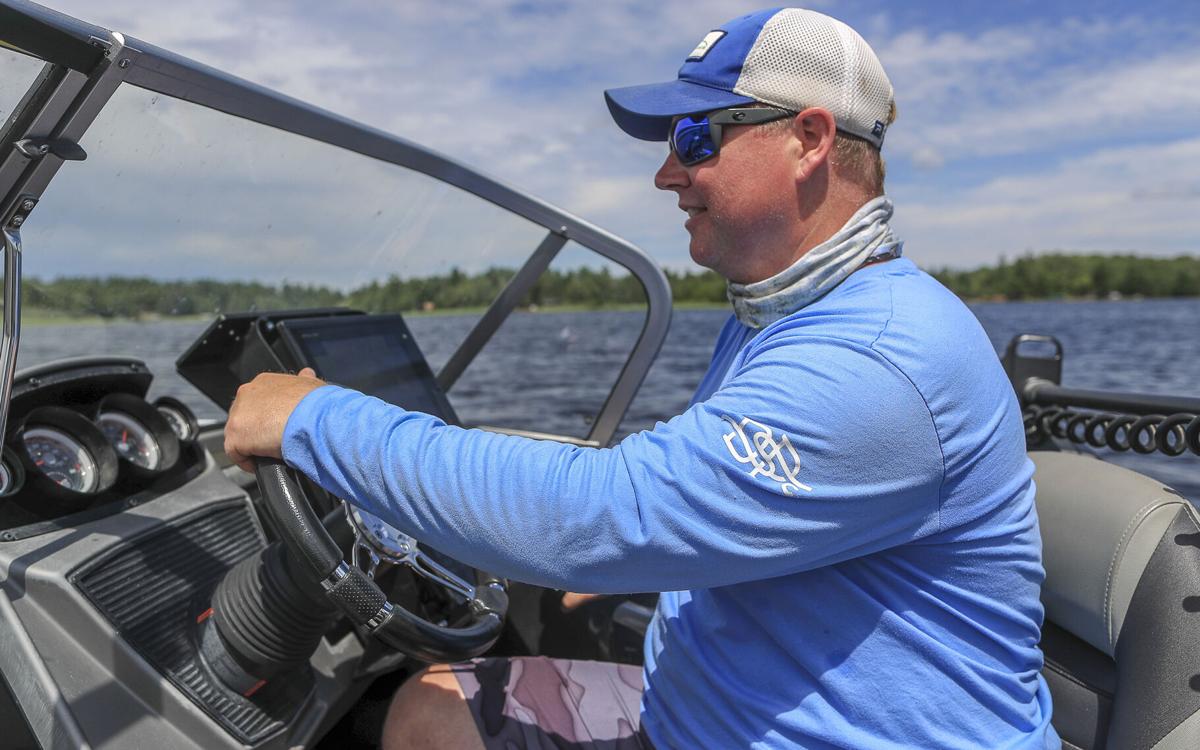 Timmon Lund was reeling in a small perch on this big reservoir north of Duluth when the conversation turned to his battle with cancer and how fishing helped pull him through sometimes vicious rounds of chemotherapy.

"I had my own boat. But there were times when I just didn't have enough energy to go on my own. But I had friends who were always calling me, always taking me out," said Lund as he tossed the fish back and into the lake and re-baited his jig with a piece of night crawler. "Those trips are what got me through treatment."

Remembering how those fishing trips helped him cope with cancer was the genesis behind Lund's new cause in life, the Catch Your Moment Foundation. He founded it in 2016 with some Duluth-area friends and some help from his brother, Josh, in the Twin Cities. It's now an official 501(c)(3) nonprofit with new chapters opening in North Dakota and Michigan.

"We've done about 20 trips each summer ... Until this summer. We're just starting to gear up this summer with all the COVID stuff," Lund said as he adjusted his Garmin side-image depth finder. "My real dream would be to see this spread across the country, with chapters in all the states."

Catch Your Moment is based out of the home Lund and his wife, Dr. Sara Lund, share on Island Lake. There's a waterfront guest cabin for clients to stay in, plus a 14-bed bunkhouse, with a sand beach and a fire pit. Lund uses his 19-foot Ranger walleye boat for most of the trips, but other volunteers offer their boats and "guiding" services as well. Greg Beach of Hermantown and Chris Lemke of Two Harbors have been instrumental in getting the effort up and running, including crewing on trips.

"We want people to bring their whole family if they want. Cancer really impacts everyone in the family, not just the patient," Lund said.

Beach is a founding board member as well as coordinator of promotions, marketing, and future operations for the organization and helped draft the official incorporation documents.

"I have a military background so I can help get through that red tape," Beach noted.

Each Catch Your Moment trip is tailored specifically for each patient and can be aimed at any species and any lake, from walleyes to lake trout, bass, panfish or muskies. The foundation's efforts are spreading mostly by word of mouth, and thanks to some social workers at clinics and hospitals in Duluth and the Twin Cities.

"It's kind of a fine line because some oncologists don't want people out fishing ... But we work it out," Lund said. "When my buddies took me fishing, my doctor told me not to go, not to touch any fish or any bait because my immune system was so suppressed. So my friends baited all my hooks and took all my fish off ... My buddies did that for me and now I'll do that for other people."

And all of it - the entire fishing trip - is free, covered by donations of time and money. Neither Lund nor anyone else involved in Catch Your Moment receives a penny.

"We cover everything. Lodging, food ... We'll even pay for the gas to get them here, or we'll go to them if they can't travel. We'll buy their fishing license," Lund said. "When people are going through treatment, money can be pretty tight."

Lund knows that first hand. He was diagnosed with Hodgkin's lymphoma in 2012, when he was just 33. Lund turned 41 this week and, for a guy who was once told he was dying, he doesn't mind any ribbing about his age.

"When I was 33 or 34 my only wish on my birthday was to have one more birthday... So actually this getting old thing is sweeeet," Lund said with a smile.

Lund said he was essentially sent home to die just before Christmas, 2014. But, as a last resort, his future wife (now an infectious disease physician at St. Luke's in Duluth) and his oncologists applied for one last experimental drug therapy. Their appeal was accepted. After just one dose of the drug Lund says he started to recover. He went from agonizing pain and being unable to even get out of bed to pain-free and sitting at the dinner table.

"It was a miracle, or a miracle of science, whatever you believe in," he noted.

Lund has been cancer-free for five years, although he still has some health issues stemming from the treatments.

Things didn't turn out so well for one of Lund's best friends, his college buddy at the University of North Dakota, Daniel Duty. The two remained fishing companions and close friends after school. But just as Lund was getting better, Duty was diagnosed with colorectal cancer.

"By the time he found out, it was Stage IV, and he went downhill really fast ... I got a chance to go visit him (in Idaho) with his family, and go fishing one last time, and say goodbye. He died within a few weeks of that," Lund said.

Lund decided to pursue Catch Your Moment in Daniel Duty's honor, as well as cancer victims Jacob Landsteiner and Kraig Kalan. The three "contributed to those around them countless memorable moments in their lifetime. May their spirit of adventure and love for the outdoors carry on," Lund wrote on the foundation's web page.

Lund has remained close to several of the Catch Your Moment clients who he has fished with. Some have gotten better. Others, like Kalan and Landsteiner, lost their battles with cancer.

"It is tough. I've spent way too much time at the Solvay (Hospice) House," Lund said. "We've lost some great people... But that comes with the territory. Not everyone we get out fishing is going to make it."

Lund grew up near Elk River, Minnesota, and inherited his passion for fishing from his father.

"He worked nights back then so, during the day, he would take my brother and me out fishing ... Every day, all summer long, we'd go fishing, then go to the Dairy Queen, and then go visit grandma and grandpa to show them what we caught."

Lund now figures he fishes about 300 days each year, either for fun or "pre-fishing" for Catch Your Moment clients, making sure he knows where the fish are when guests arrive.

"I try to make it the best fishing trip of their lives," Lund said. "And I think we've succeeded for many of the trips."

That includes a trip with Liam Schmid of Nowthen, Minnesota. Lund took Liam, then six years old, and his friend and both their dads to Pike Lake near Duluth in the fall of 2018 where the kids caught more than 20 walleyes, several of them more than 20 inches long.

"They went from hardly catching a walleye before to betting each other who would catch a 30-incher.... It was one of the best days I've ever experienced in a boat," Lund said, smiling just thinking about it.

Liam, now 8, has been cancer-free for two years, but only after a surgery to remove a tumor on his skull and then two years of chemotherapy to battle a rare cancer called LCH, Langerhans cell histiocytosis, that settled in Liam's bones.

"He just had an absolute blast on that trip, with his friend Caden. They were catching fish like crazy, catching doubles ... and some really nice fish," said Matt Schmid, Liam's dad. "He's a tough kid. He's a fighter. We thank God for every day it stays away."

Schmid called Catch Your Moment "an absolutely fantastic organization. What they are doing for people is fantastic."

Lund says he hopes to keep doing it, conceding that his wife has been kind enough to let him pursue Catch Your Moment while she brings home the bacon.

"I'm sort of like a stay-at-home dad, only we don't have any children. So I fish," he said. "This is how I want to give back after people gave so much for me."