On Jan. 27, during CNN's Don Lemon Show, the full extent of the elite mainstream media's condescending attitude toward "red" America was on full display.

During a segment discussing Donald Trump with Rick Wilson and Rajahat Ali, Lemon and his guests began lampooning the intelligence of not only President Donald Trump, but of the 63 million "red" Americans who voted Republican. Ironically, just as when Hillary Clinton made the critical mistake of calling all Trump supporters "deplorable," the video of this Lemon segment will likely act as one catalyst for Trump's re-election. Decades of this kind of mainstream media condescension has brought a backlash the media just doesn't get. Let me explain.

First, the egregiousness of the Lemon condescension cannot be overstated. Rick Wilson began to mock and belittle Trump, claiming he could not find Ukraine with a map even if the map included a huge "U" and a large picture of a crane. He continued by calling all Trump supporters illiterate "credulous boomer rubes" even dumber than he alleged of Trump.

Wilson went so far as to mock with a fake, exaggerated Southern accent. While Wilson engaged in the belittling of half of America, Don Lemon began laughing so hard he put his head on his desk with tears in his eyes and continued laughing. All three commentators continued laughing and belittling conservative Americans throughout the segment.

The lie about fascism

According to a Fox News description of the segment, “As Lemon began crying with tears of laughter, Wilson went on to depict what he thought a typical Trump supporter sounded like. ‘Donald Trump’s the smart one, and y’all elitists are dumb!’ Wilson said with a heavy Southern accent. ‘You elitists with your geography and your maps and your spelling!’ Mr. Ali chimed in during the mockery. ‘Your math and your reading!’ Mr. Wilson added. ‘All those lines on the map!’"

Reaction to the segment was quick and telling. Steve Krakauer, a veteran of CNN but now a conservative commentator, tweeted: “The arrogance, the dismissiveness, the smug cackling, the accents. If Donald Trump wins re-election this year, I’ll remember this brief CNN segment late one Saturday night in January as the perfect encapsulation for why it happened.” Ivanka Trump wrote of the segment: “You consistently make fun of half the country and then complain that it is divided. The arrogance, mocking accents and smug ridicule of this nation’s ‘Real Elites’ is disgusting.”

Ironically, Lemon's background objectively makes him one of the the last people to belittle Trump's intelligence or experience. Trump is a graduate of the top business school in the nation, Ivy League Wharton's School of Business, with an IQ estimated beyond 150. He has run an international multibillion-dollar business, which has required he travel and visit top international leaders the world over.

Pelosi the guilty one

Beyond Lemon's underwhelming credentials, he has made shockingly ignorant and/or ridiculous assertions on CNN. In 2014, when a Malaysian Airlines aircraft disappeared from radar (later found to have crashed into the ocean), Lemon held a segment to consider the potential the aircraft went into a "black hole." Thankfully, a guest informed Lemon the idea was ludicrous, as a true black hole would have obviously sucked in the entire planet.

During the wall-to-wall negative Trump coverage by Lemon, a conservative questioned why Lemon never covered Obama scandals. Lemon actually claimed that during the Obama administration, "there was no, there were no scandals" to cover. Any informed American is aware of scandals like "fast and furious," IRS targeting conservative groups (resulting in the firing of Louis Lerner), Benghazi (involving multiple scandals before, during and after the killing of four Americans), Secretary Clinton's use of a private server for top classified emails, among many others.

Former liberal journalist Bernard Goldberg wrote about the reason the media slants so far to the political left. According to Goldberg, those working in national media are overwhelmingly politically liberal and as a result associate almost exclusively with other political liberals. Their resulting bias is predictable.

At the cocktail parties in places like Los Angeles or New York (not setting foot in "flyover" country), they lampoon conservative America as being inferior bumpkins. They don't know pro-life Americans and as so forget that around half the nation doesn't hold their pro-choice views. Same with gun rights, religious freedom, etc.

During this recent segment, Lemon seems to have forgotten he was not at a media cocktail party without repercussions for slamming conservative Americans. The liberal bias was on full display in all it's true condescension and arrogance.

As happened when Hillary Clinton called conservative Americans "Deplorables," those demeaned by Lemon will remember his words and laughing at the voting booth in November. Maybe, just maybe, the mainstream media will finally learn a lesson about the importance of respect for fellow Americans. Even conservative Americans.

On the eve of his impeachment acquittal in the Senate, Donald Trump delivered a combative yet triumphant State of the Union address.

"America is a God-fearing country with all that implies. America is the only major (first world) country in the world in which a majority of c…

COMMENTARY: Getting through crisis

The last few weeks have been quite busy for many of us with emergency response duties. Having served for the past few years as the senior fede…

Since my last article written near the end of March, I’ve had the privilege of watching and being part of South Carolina’s response to the cor… 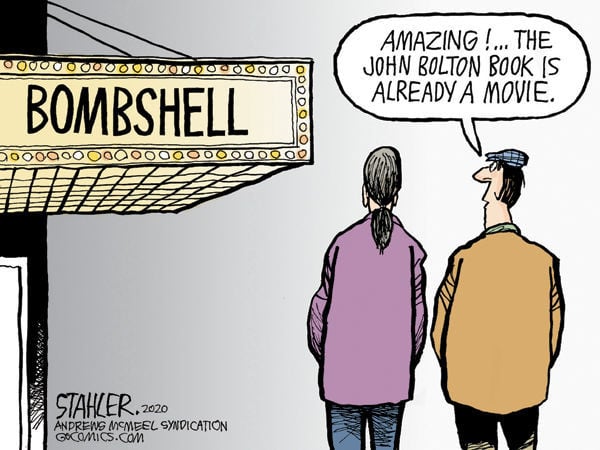