‘He didn’t teach me how to live without him’

We all have been hearing about COVID for over a year now. One of the prayers I said all day every day was for my family and friends and people I know to be protected and not fall victim to COVID-19.

Unfortunately my family, just like many others, wasn't so lucky. It's not about who's the strongest or bravest. COVID affects the best of us. I figured if we could share our story of our loss, maybe we can save at least one life.

Understand that continuing to wear a mask isn't easy. Most are tired of hearing the same warnings or taking the same precautions. Please remember this virus does not take a day off. If you don't like wearing a mask, trust and believe the ventilator won't feel better.

My father George Washington (Mr. Washington or "Bubsie," as most of you know him, originally from Eutawville and later from Orangeburg) was a well-known businessman in Orangeburg County for years. He started his traveling business many years ago in the early ‘80s. To the world, he was one man. But to us, he was our world.

Our father worked at Family Dollar for years after closing his bus station on Bass Drive in Santee. From there he went on to work for Family Dollar in Orangeburg. After leaving Family Dollar, he started a career in security for the VA hospitals. Like most people, he was living a normal life.

Then came along the coronavirus, changing the world that most of us were familiar with. My father was the biggest on sanitizing, giving fist bumps instead of handshakes, not going to gatherings.

Then like most among us, he let his guard down. Having younger kids who played sports, naturally he wanted to be there and support them. That's one of the biggest topics of conversation when speaking about him: Did he contract COVID from a game?

Mr. Washington went to a game, woke up one morning and had a fever. He went to the doctor as a precautionary measure and was then sent to the ER. Well because of COVID, they ran tests on him. Here comes the upset. He was diagnosed with COVID and pneumonia.

I will never forget the feeling I had when he texted me those words. He said “Baby, I’m in the hospital.”

I said, “Positive what?”

He then said for COVID and pneumonia. The walls began closing in. The next 11 days then became the most agonizing days of my life. I won't bore you with the details of the next 11 days, but I will tell you this: Something that started with just a fever turned into the last 11 days of our father’s life.

One of the worst feelings is going through that and realizing how much you are going to miss a moment while you are living in that moment. You can have this dazzling life, then suddenly all you have left are memories, photographs that never age, a calendar marking dreadful new holidays and a grave to visit.

You won't understand the difference in enjoying music and being happy and being sad and understanding the lyrics. My father taught me everything, but he didn't teach me how to live without him. I said all that to say this: Something as simple as wearing a mask is doing yourself or someone's family member a favor. Just because one person may be able to fight the virus doesn't mean the next person will be that lucky. I'm a living witness. Hope our loss can help the next person. God Bless.

I don’t know how everyone else felt but I can tell you a year with the coronavirus was definitely hard. I am a family of seven -- my husband and I have five kids in the house. We have three middle-schoolers and two elementary-schoolers.

When we first heard about the virus being in another part of the world, it was scary but not nearly as scary as when it hit the United States and things started to happen. In March 2020 when we first got the report about schools being shut down, that's when it got super real for me and all the anxiety quickly hit me at once and panic set in.

I had all this worry inside not knowing how could it affect people’s health. My husband has COPD and asthma, so there was that worry on top of me worrying about my kids’ schooling and how this could affect them and is it safe to go out anywhere or how do I not get the virus.

When you don't know much about something, it makes you freak out and overthink everything and worry immensely. I had to make sure the kids did their schooling, which had me going to the schools to get their stuff. So I had to make sure they got Chromebooks for my older ones and for my younger ones get their worksheets, and I had to turn the packets in weekly and pick up new work.

It was definitely a lot to take on at once, but I had to do it and do grocery shopping and pick up medications as well and not knowing if I somehow contracted the virus every time I went somewhere – it can take a toll on your mind and sanity.

This virus also had my husband nervous because of his lungs so he would have me buy Lysol spray and Lysol everyone and everything that came in our house just to be safe. The next thing you know, there was a shortage on Lysol and toilet paper, which made panic worse, as well as certain places shut down.

The law was then made to where you had to wear a mask in all the stores and buildings. I can tell you that wearing a mask made my anxiety worse and at first messed with my sense of direction. I would trip over things I would normally see or drop things I wouldn't normally drop. I would have small panic attacks in the store.

I eventually got used to wearing a mask since I had to. My husband eventually left the house when he needed to. It was like once we got used to the new way of our daily life, we just kind of got used to it since it seemed to be our new normal, which is a messed-up normal.

I would have to say living and surviving a year with COVID was definitely an obstacle my family had to overcome but we did it slowly. No matter how scary or hard it was to get used to, we had to do it or live in fear, which just makes things worse.

I can say that virtual schooling has definitely been a challenge for some of my kids -- and a blessing. I’m glad there is finally a vaccine -- that is a small rainbow after a long, horrible storm. There is always hope.

My name is Eddie Rivers. On March 28, 2020, my wife and I went to the Regional Medical Center to get tested for COVID-19. We both tested positive. She was sent home to quarantine and I was admitted because of a touch of pneumonia in my left lung.

ICU called my wife six hours later and told her that I could not breathe and had to be sent to them. I woke up two weeks later to find out that I was intubated and could not breathe on my own. My wife was told that I may not make it. I knew nothing about the outside world or my wife and family.

After four weeks in ICU, I left the hospital to go to my family using a walker and barely speaking anything that they could understand. I realized that God had spared my life and I am truly grateful. With the assistance of family and caring nurses, I am able to slowly walk, talk, feed myself and, yes, go to the bathroom again without assistance.

After a year of healing, mentally and physically, it is still painful and difficult to get around. I am mentally afraid to take my family on any vacations.

Because of coronavirus, after meeting for 72 years, a group in the Providence Community was forced to call a halt to their monthly gatherings. In 1949, to celebrate the marriage of two couples, several neighbors “had a supper” in their honor. On that night, they decided to make this a monthly get-together and include all of the couples in Providence. It was called the “Mr. and Mrs. Club.”

Through the years, members were added. Currently, only two of the charter members are still living: Betty Shuler and Sue Shuler.

At that time, their plan was to meet on the first Saturday night of each month and have a covered-dish meal followed by trivia type games. For almost three-quarters of a century, only a few changes were made:

1. After some of them became widows or widowers, the name was changed to “Supper Club."

2. Instead of bringing a covered dish, they began to eat at a restaurant or have the meal catered at the Providence Fellowship Hall.

In March 2020, the pandemic forced them to stop meeting. This was the first break in that 72-year-old tradition.

Year 2 of the coronavirus pandemic brought a focus on survival, vaccines, economic recovery – and assessing the lessons learned from a year wi…

NBC News reported in September 2020 that “fraudsters steal millions from unemployment coffers, adding to pain of those still waiting for benefits.”

Lena Carson had the threat of the coronavirus looming over her since she was 13 months old. While the 2-year-old’s serious health issues last …

The Orangeburg County Legislative Delegation received an update this past week on the newly formed Bringing Our Best Care – Bamberg, Orangebur… 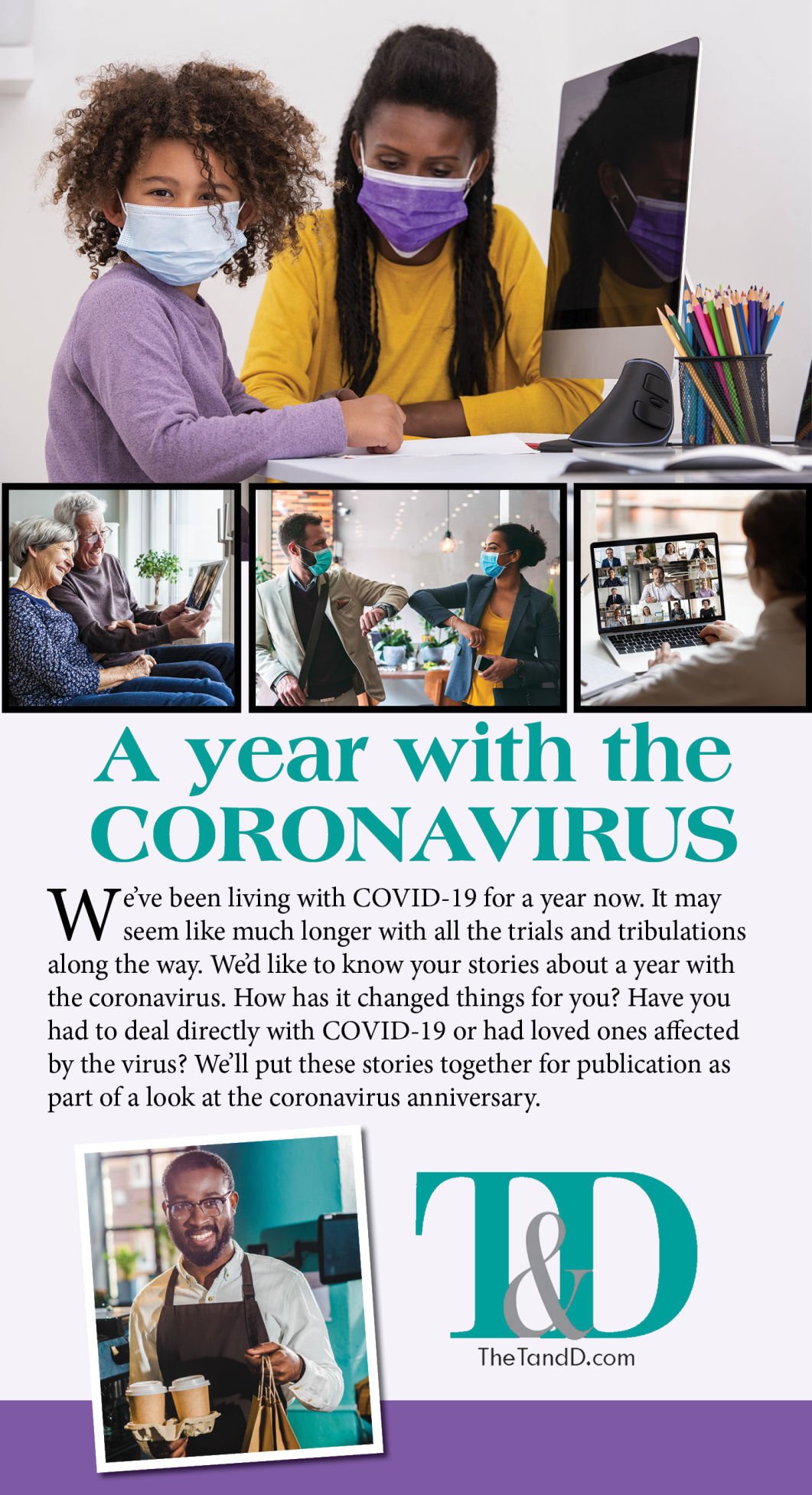