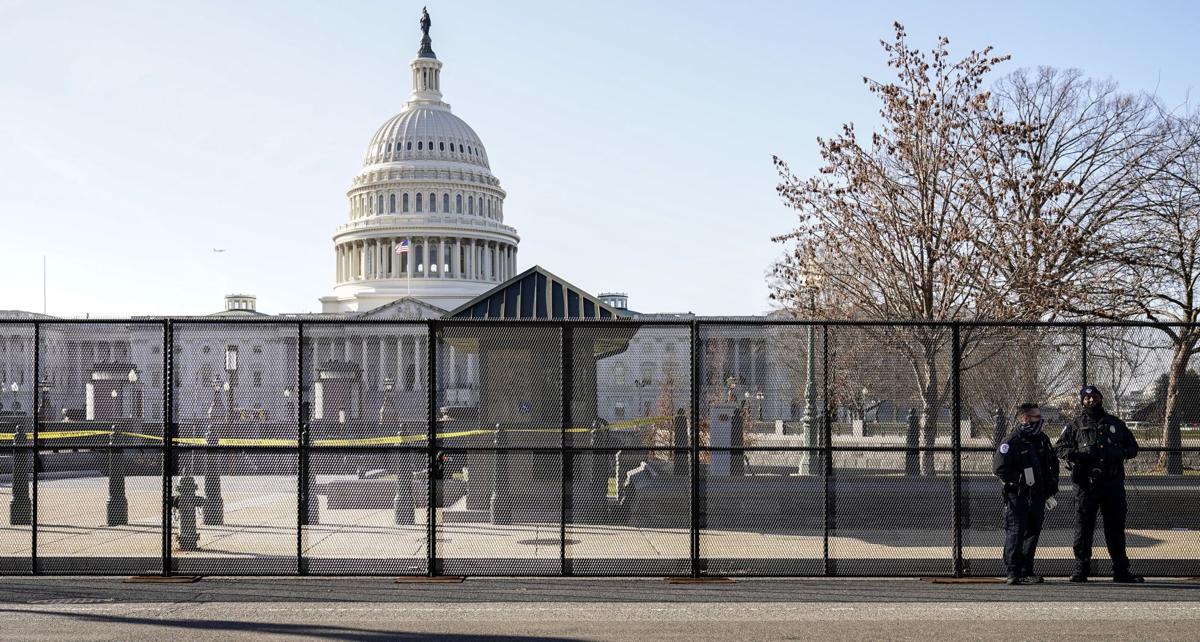 Capitol police officers stand outside of fencing that was installed around the exterior of the Capitol grounds on Thursday in Washington. The House and Senate certified the Democrat Joe Biden's Electoral College win early Thursday after a violent throng of pro-Trump rioters spent hours Wednesday running rampant through the Capitol. A woman was fatally shot, windows were bashed and the mob forced shaken lawmakers and aides to flee the building, shielded by Capitol Police.

There are a lot of things that I know ... or don’t know. But there are very few things that I don’t have an opinion about. Today I am focusing mostly on my opinions.

If you have a specific type of surgery, you KNOW how that feels. Those feelings are facts to you. If you tell me about your surgery, I only THINK I KNOW how it feels. That is an opinion.

My brother’s birthday is Jan. 7. I circle that date on my calendar. However, now I will have the day before it also circled -- Jan. 6. On that day this year, I saw (via television) things happening that I never expected to see in my country, the United States of America.

LETTERS TO THE EDITOR: Epitome of white supremacy

I have seen protests and things destroyed by mobs before, but never have I seen a group of our own citizens trying to undermine the government of our country. And never have I even given it a thought. Most of those involved were there because of their opinions (or the opinions of others they believed in) and not because of facts. They did not do their homework, because they did not WANT to believe what they would learn.

When I witnessed the terrorist attacks on our country on Sept. 11, 2001, I learned those were “foreigners who hated us.” On Jan. 6, 2021, the people who displayed their hatred were supposedly U.S. citizens.

But besides comparing Jan. 6, 2021, to the 9-11 attack, I also compare it to what is referred to as the “Kool-Aid Massacre.” In 1978, a group of people were under the influence of someone they trusted, and they were so dedicated to his beliefs that they (918 people) followed him to their deaths by all drinking Kool-Aid, which they KNEW was poisoned. I won’t go any further about that comparison. You can Google that yourself.

EDITORIAL: Move ahead but look back at ’20 election

Before Jan. 6, 2021, it had been over two centuries, in 1814, since the Capitol of our country was breached by people seeking to do harm. Even then, it was British troops who set fire to the building. In 1954, four Puerto Ricans did enter the House of Representatives, where they fired aimlessly, injuring five. But a mob of citizens of our country seeking to have an election overturned because the results were not what they hoped for??? Never before.

It was apparent that they trusted no authorities, not even the U. S. Supreme Court, which had ruled more than once that there was no evidence of voter fraud. I have sense enough to know that dishonesty can be found in almost everything in the world, but I do not believe that the result of everything I don’t agree with is because of fraud.

The election is not the only thing that people who claim to be authorities have given false advice about. Some of it makes no sense at all. Remember when “they” said the reason so many people had COVID-19 was because too many people were being tested? Remember that? The tests did not give any people the virus. They simply reported whether or not it was there. Some people preferred to keep the number down by not knowing, as if ignorance of the fact was a cure.

You can support local news

I do believe that it is everyone’s right to voice an opinion. I have often been around people whose opinion was different than mine. Most of the time, I have chosen to let them have their say while remaining quiet, because it was evident what I had to say would not change their minds. When I have put my 2 cents' worth in, I have usually wished later I had not. It never seemed really worth arguing about.

My father was in law enforcement. Did that mean I had the right to make an arrest? No. I have family members who are attorneys. Can I give legal advice? No. I have family members who are doctors. Would I try to treat you for a medical condition? No. I can give you opinions on how to handle any of those, but I would not advise you to necessarily follow them.

If you want to know facts, you need to research whatever is questionable to you. Don’t ask others who are no more of an expert than you are for the answer. That is where you put opinion up against facts. Two opinions are no better than one.

So, here is my opinion for today. If you want to know something, go to the source. There are many types of research available today. Take time to do it. When I grew up, the only sources of research were books that were in our school library.

By the time our sons came along, we invested in a set of encyclopedias. I do believe almost every household in our community owned a set of “World Books.” And I may be the only one that still has a set. But when we had questions about how things worked, where things were, how the government of the United States was set up, that’s where we found our answers.

So seek your own source of facts and don’t let anyone convince you of anything that just comes from their opinions. I’ve referred to my grandmother before. She always said, “There are two sides to every story. Sometimes, neither one is right.” If you are just listening to someone’s version of an issue, that is not a bad thing to remember.

Harriet L. Hutto of Providence is a periodic contributor to The Times and Democrat.

There’s a lot of focus on words in the political arena. President Donald Trump is blamed for inciting riots in Washington on Jan. 6 with his w…

Capitol police officers stand outside of fencing that was installed around the exterior of the Capitol grounds on Thursday in Washington. The House and Senate certified the Democrat Joe Biden's Electoral College win early Thursday after a violent throng of pro-Trump rioters spent hours Wednesday running rampant through the Capitol. A woman was fatally shot, windows were bashed and the mob forced shaken lawmakers and aides to flee the building, shielded by Capitol Police.