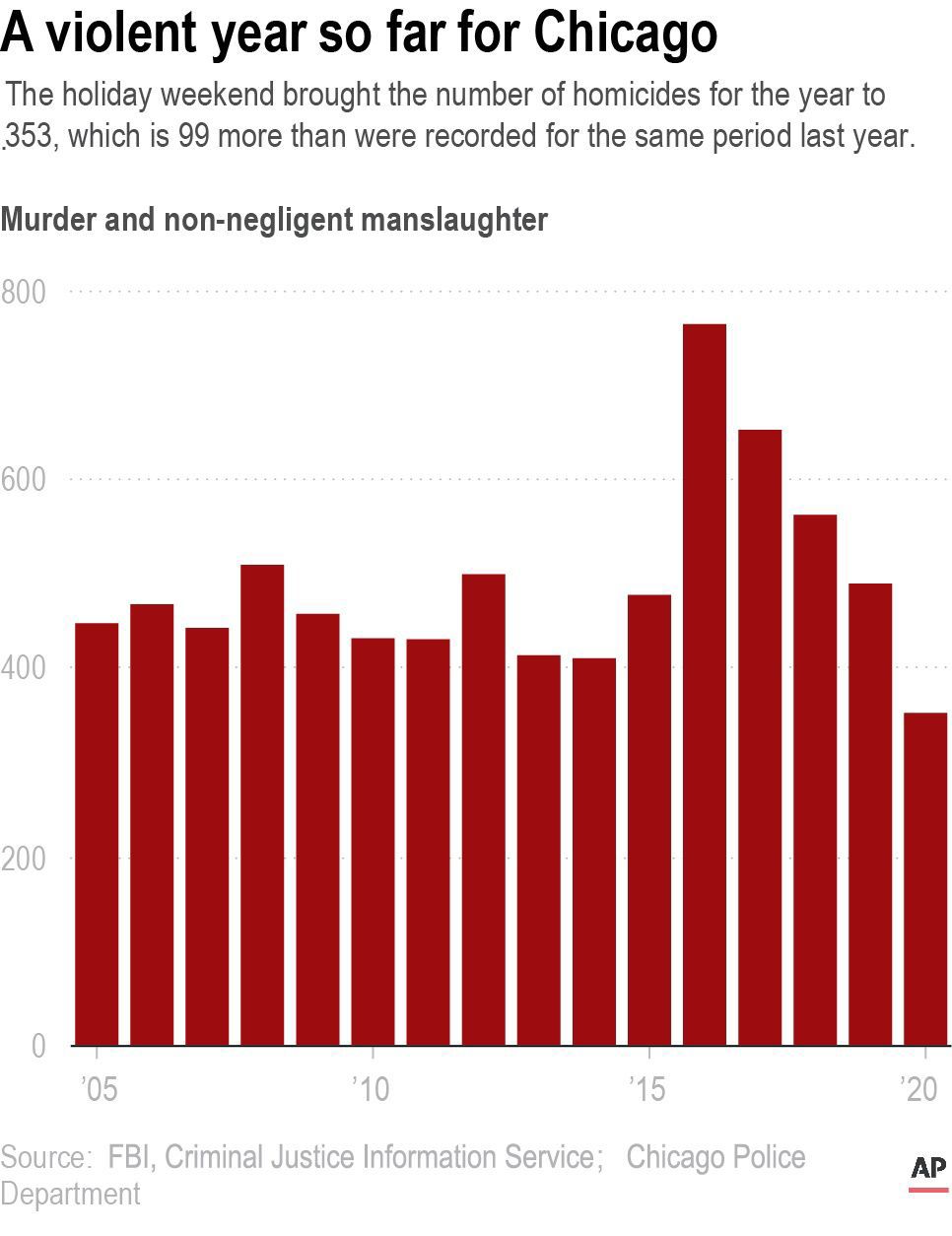 The holiday weekend brought the number of homicides for the year to 353, which is 99 more than were recorded for the same period last year.;

When NASCAR’s only black driver, Bubba Wallace, and his racing team learned of a noose at his workplace, the saturation process began.

First the media went into overdrive to discuss ropes, nooses and the history of lynchings historically perpetrated by white folk upon the black community. We even heard mention of the new National Memorial for Peace and Justice, also known as the lynching museum, in Montgomery, Ala., which opened in 2018.

Then, the FBI sent 15 agents to the Talladega Speedway in Alabama to scour the noose territory. But the nation’s top federal investigative arm determined no hate crime occurred. When NASCAR released photos of the rope, we ultimately learned that a noose is still a noose — except when it’s used to pull garage doors at racetracks.

In Chicago on that same Father’s Day weekend, 104 people were shot, the most for a weekend since 2012 in the Windy City, a metropolis long plagued by black-on-black violence. But the trendy Talladega story vacuumed up most of the oxygen.

More alike than you think

As Chicago black community activist Tio Hardiman said, “I wasn’t surprised because Bubba Wallace is a celebrity. And you know how the media loves celebrities.”

Still, perhaps the FBI should have shipped, say, 12 of those agents to find out what the hell happened in Chicago that same weekend. Most of the rampant shootings in Chicago traditionally have been black-on-black issues. “Probably 80%,” Hardiman estimated. Just another day in the neighborhood, meaning it’s old news for national media.

And we’re not talking Mr. Rogers’ Hood, either.

Also, in other major cities for the Fourth of July:

• In Philadelphia, a 6-year-old boy died after he sustained a gunshot wound, one of five fatal shootings in a span of about five hours Sunday afternoon

• In Atlanta on Saturday and early Sunday, at least four people were shot to death, including an 8-year-old girl when gunmen opened fire into her car. At least 22 others were wounded in several separate skirmishes.

The controversial Hardiman, 57, lives on the South Side of Chicago. “I hear gunfire every day, all year round,” he said. “I know the difference between fireworks and gunfire.”

He is sort of an outlier in today’s social climate. Most black folk, at least publicly today, only want to discuss police killings. But Hardiman, director of Violence Interrupters in Chicago, says count him out of that one-sided narrative. “When people get upset with me for talking about black-on-black violence,” Hardiman said, “I get upset with them for not talking about it.”

On Father’s Day weekend, of those 104 shootings, 15 resulted in deaths. The next weekend, the Chicago Casualty Report stated 65 shot, with 18 homicides.

On Fourth of July weekend, the count was 87 shootings with 17 deaths, including a 7-year-old girl who died late Saturday night after being shot in the head.

Hardiman essentially is Chicago’s atomizer: He takes a monstrosity of a catastrophe and tries to convert it into more granular particles for explanatory purposes.

“A lot of the violence in Chicago is about misunderstandings,” Hardiman said. “It’s the ‘strain theory.’ People are living in stressful situations. Some people have mental-health issues; some have no money; some can’t communicate; some don’t know how to solve problems.

“So, the gasoline is already in these neighborhoods; it just takes someone to get angry about something or react to something, light the match and start the fire.”

He noted that shootings on the south and west sides of Chicago have maintained a steady pace because of these scenarios:

• Low arrest records, which mean a single assailant can account for multiple and repeated shootings and homicides.

“It’s easier to get away with shootings and murders here than selling drugs,” Hardiman said. “The arrest record is very low.”

“A lot of people don’t want to talk,” he said. “Witnesses feel intimidated.”

Note that within the past year an 18-year-old pregnant woman was fatally shot after she had testified against a man convicted of murdering her cousin. A hitman was paid $5,000 to execute her. That’s why some black community groups have requested that Chicago police offer better resources for protection and safeguards of witnesses.

Two other recent tragedies: Two black teenagers purchasing candy in a store were shot and killed when they asked a 6-foot-4 black male, “How tall are you?” while standing in line in a store and a 3-year-old girl was shot only 30 minutes after a 15-year-old boy was shot only a half-mile away in what police believe was a retaliatory shooting.

The bet here is that most readers weren’t aware of either matter. Why not? Because black-on-black crime basically is deemed an afterthought by most major media; so are black-on-white incidents.

Therefore, the victims don’t become household names. Therefore, in this climate, if a black person isn’t killed by a police officer or a white person, that life apparently isn’t worth a damn.

Gregory Clay is a Washington columnist and former assistant sports editor for McClatchy-Tribune News Service. He wrote this for InsideSources.com.

COMMENTARY: It’s going to get worse

It’s going to get worse. CO-19 pandemic, racial division and unrest, political correctness, media fear-mongering, and politics-as-usual in Was…

Recent columns on The Times and Democrat editorial page raise questions about fairness and human rights. Three far-right columns go beyond any…

COMMENTARY: Setting students up for agony

Kudos to the president of the United States of America, Donald J. Trump, for making a statement that all Americans can agree on: Students need…

In the midst of the COVID-19 pandemic, as educators have worked tirelessly to find the ways and means to reopen schools safely for the 740,000…

When Chris Wallace asked President Donald Trump on Fox if he would accept the results of the November election, the response was chilling. "I …

COMMENTARY: My garden of heroes

In this month of national introspection, and as the air is full of the thump of toppled statues, President Donald Trump proposed creating a na…

COMMENTARY: Save our monuments

The holiday weekend brought the number of homicides for the year to 353, which is 99 more than were recorded for the same period last year.;