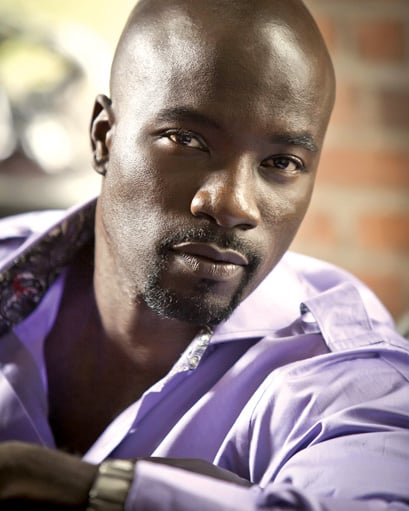 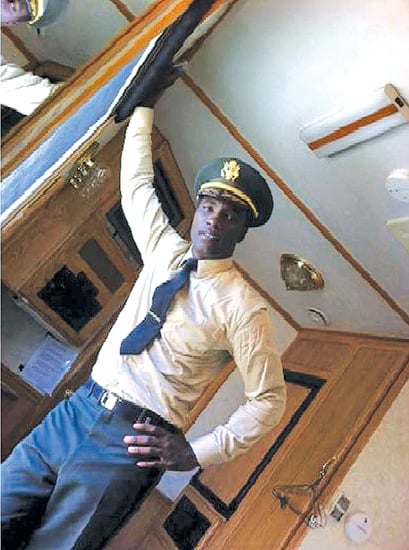 Mike Colter stands in costume on the set of "Men in Black 3."

St. Matthews native Mike Colter has always blazed his own trail, never really fitting into anyone’s mold. It is a trait that has served him well as a film and television actor.

Colter’s resumé spans years, and includes work with such Hollywood elite as Clint Eastwood and, most recently, Will Smith. He portrays Smith’s father in “Men in Black 3,” the latest blockbuster in the science fiction comedy franchise also starring Tommy Lee Jones and Josh Brolin.

Colter also has a recurring role as Lemond Bishop, a powerful Chicago drug lord on the CBS television series “The Good Wife.”

A graduate of Calhoun County High School, Colter, who was voted “most ambitious” in his senior class, is the son of Freddie Colter of St. Matthews and the late Eddie Colter Sr.

Colter was just 8 years old when he said he decided to become an actor. It was 1984, and he’d just seen the film “A Soldier’s Story.”

He said acting has always given him a chance to explore his imagination.

“I just like playing different characters, not having to be myself,” he said. “I’ve always been in my own world and stayed to myself. For me, acting is just what it is. If you’ve never acted before, you have to go back to being a kid and tap into that freedom that you don’t have anymore. I always wanted to cultivate and stay in that world.

“It’s not practical, but if you must do it and you can’t do anything else, then follow your dream.”

That’s exactly what Colter did. He started and became president of a drama club in high school. And the rest is history.

“I wanted to be an actor when I was younger, but I didn’t know how to get into it,” he said. “I thought school would be the best outlet. I knew there was a way if I could get through school, get some training, and maybe get the chance for someone to see me on a different level and open doors.”

He spent a year at Benedict College in Columbia, where he was mentored and groomed by drama professor Scott Blanks. Colter then transferred to the University of South Carolina, where he earned a bachelor’s degree in theater. He ultimately earned a master’s degree from Rutgers University, where he studied in the Mason Gross School of the Arts under renowned acting teachers William Esper and Maggie Flanigan.

“Like everybody, I decided between Los Angeles and New York,” Colter said. “I just took the opportunity to go with an agency in L.A. at the time. I went out there for a year, and it was slow going. It took three months before I got my first acting job. That was a little disconcerting.”

Colter eventually landed jobs as a guest star on “The Parkers” with comedienne Mo’Nique and as a paramedic on “ER.” He was also able to land a role in the television show “Spin City” with Charlie Sheen, but his small part as a person providing door security at a club never aired.

“I was just trying to find a way to make ends meet while trying to be an actor,” he said.

It was after relocating back to New York that Colter’s acting career took off.

“I did think I was going to do more theater in New York, but it turned out that I got a small role in a little independent film called ‘Brooklyn Lobster,’” he said. “It was the first film I got involved in, and I was excited about it.”

The casting director for that film was the late Phyllis Huffman, the majority of whose work teamed her with Clint Eastwood. She had cast 14 of Eastwood’s films and served as casting executive on two others during her renowned career.

“I was introduced to her, and it really was a door to other opportunities,” Colter said. “Casting directors will get you in doors and actually get you in front of people you don’t know and fight for you. They try to get you that big break that you need. She did that for me. She got me in front of Clint Eastwood.”

Colter went on to score a role in the Oscar-winning film “Million Dollar Baby,” a 2004 sports drama directed, co-produced and scored by Eastwood.

“I played Clint Eastwood’s champion boxer who left him and went on to win the heavy-weight championship,” Colter said. “It was a year before the movie came out and I didn’t know who was going to be in it, but all I knew was that the script was really good. I told my agent, ‘This movie is gonna win everything.’”

At the time he made the movie, Colter said, “I was young, and I think I was too young to be afraid. Looking back, I wasn’t flustered or intimidated. I think I probably should have been because Clint Eastwood’s known for doing only one or two takes. When I’m with Clint Eastwood, I’ve got to have my stuff together.”

Colter, who will turn 36 in August, said he didn’t think he had much of a chance of playing Smith’s father in “Men in Black 3.”

“Will was a kid at the time, but it’s in 1969,” Colter said. “I don’t have any hair. I was thinking, ‘The timing is wrong. Will Smith and I don’t necessarily look that much alike. It doesn’t make any sense to me.’

He said working with Smith was great.

“I’ve been around a lot of big stars, and he’s one of the biggest you could probably think of,” Colter said, describing Smith as pleasant professional who “was always in a good mood.”

“He’s handled his celebrity very well,” Colter continued. “He’s got a natural way of dealing with it. He’s charismatic, but then comfortable in his own skin. He doesn’t walk around with a chip on his shoulder.”

Colter recently returned from Amman, Jordan, where he was working on a Kathryn Bigelow-directed film set for release in December.

“It’s a movie about the hunt for Osama bin Laden,” Colter said. “I was out there for seven weeks. I was one of the field members that hunts bin Laden, and this film is about the mission and the information to find Osama.

“I work with a lot of women directors, and I work better with them. Women are definitely making their mark in directing.”

Colter now lives in Sherman Oaks, Calif., with his wife, Iva. He said he has appreciated her support throughout his career.

“I could have probably walked away or given up on jobs, or not have been able to stay focused enough to stay in it,” he said. “You need some support. I have doubt sometimes, and so she has always been more than supportive. Many times, she’s said to me, ‘If you weren’t any good, I would have been the person to stop it.’ She gives me the blunt, honest truth, and you oftentimes don’t have that kind of truth. It’s nice to have a good pair of eyes.”

The actor said coming from a small town did not limit his possibilities. He said the key is to find a goal and work to accomplish it.

“If your imagination can’t bring you out of where you are, then you just don’t have a point of reference,” Colter said. “You can do a lot more. Examples are very few and people get stuck, and being rappers and athletes is the only thing they can think of. You have to find a way to break out of that.

“I always ask myself, ‘Is there anything else I can find myself doing to make myself happy?’ I can’t find anything, and that’s why I’m still in it.”

Olympians past & present reflect on Tokyo 2021

Mike Colter stands in costume on the set of "Men in Black 3."