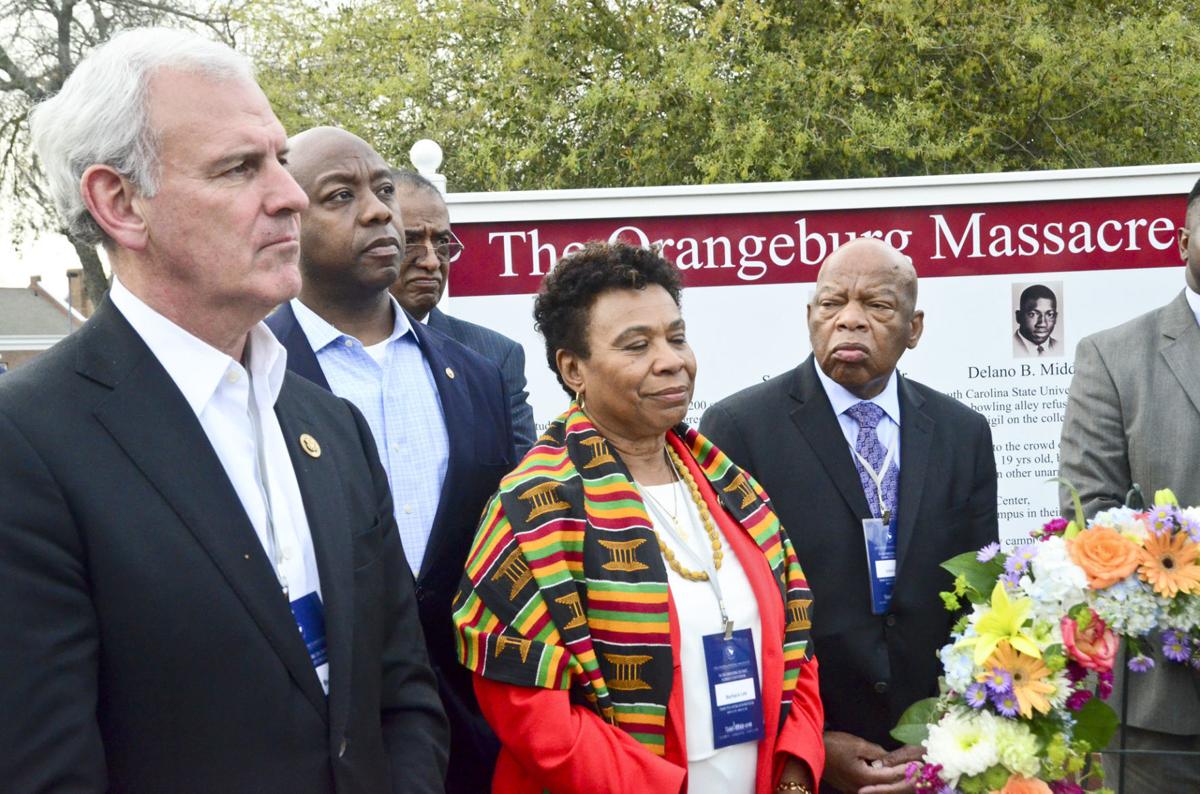 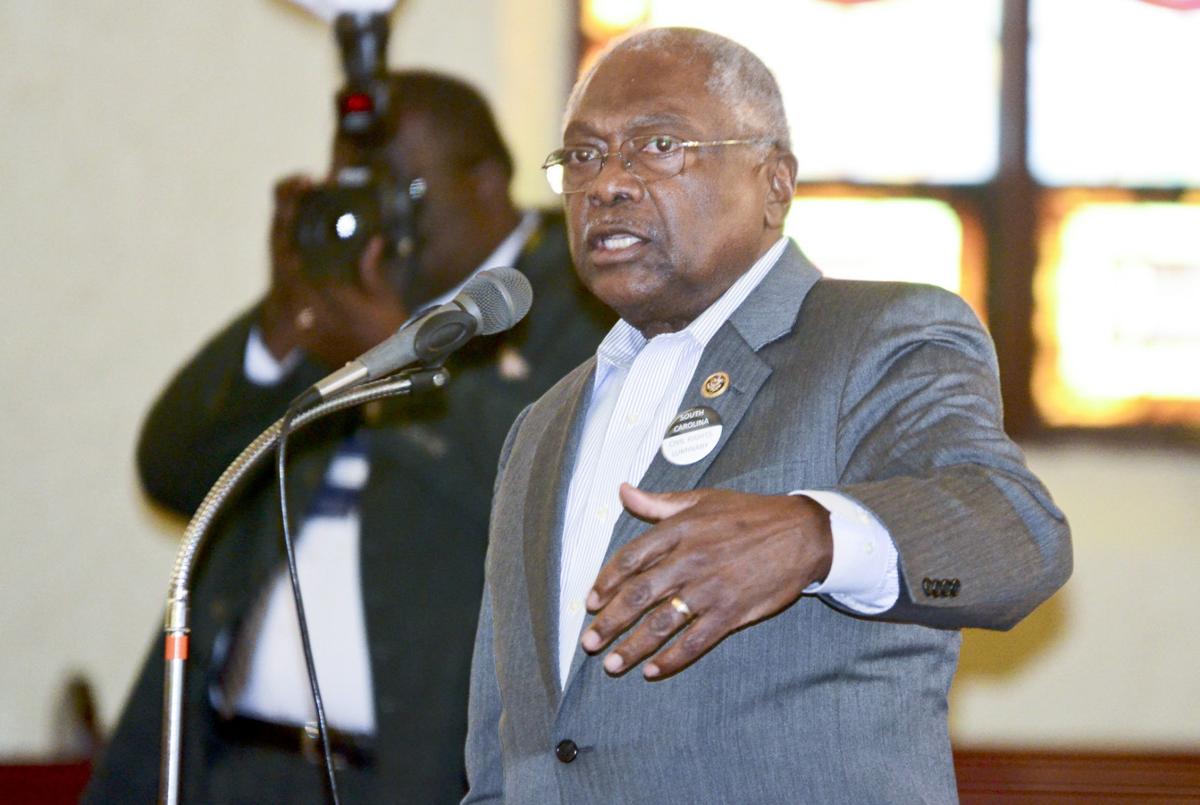 The national leaders are taking part in a journey this weekend to explore the unique role of faith and the civil rights history of South Carolina. They were told of Orangeburg’s role in that history.

Cecil Williams of Orangeburg and Voorhees College President Dr. Cleveland Sellers shared their stories during a presentation at Trinity United Methodist Church. Williams is widely acknowledged for his photographs chronicling the civil rights movement in Orangeburg and beyond. Sellers was imprisoned following the 1968 Orangeburg Massacre during which state troopers killed three students at then-South Carolina State College. He was later pardoned.

With other members of Congress from as far away as California, Rhode Island, Delaware, Alabama and Texas in attendance, Williams displayed his famous images and acknowledged the role of the church at which the event was being held.

Trinity UMC was supportive of student activists from then-Claflin College and S.C. State who often gathered there during the civil rights era.

“The men of this church really took a leadership role in really bringing about the American civil rights movement,” Williams said as he showed pictures of Trinity church members.

The church was a natural place to be, he said.

The Orangeburg native began taking pictures at the age of 9 and became a correspondent for JET Magazine at age 14.

His photos also told the story of young activists protesting and marching for equality.

“Orangeburg has played a pivotal role in civil rights,” Williams said. “Orangeburg is mentioned in almost no history books.”

Williams captured the importance of Briggs vs. Elliott, the South Carolina case that led to the U.S. Supreme Court’s Brown vs. Board of Education decision, which paved the way for public school integration.

“We didn’t have any weapons to fight. We were told not to retaliate,” he said.

Williams said he desires to bridge the gap between yesterday’s generation and the kids of today by telling stories and sharing his photos.

Sellers recalled events leading up to his getting shot on the night of the Orangeburg Massacre.

In 1968, black students were protesting because they were not allowed to bowl at the All-Star Bowling Alley because of segregation.

“They were told that they had to leave or they would be arrested,” Sellers said.

Then on the night of Feb. 8, 1968, troopers opened fire on students on S.C. State’s campus. Two S.C. State students, Henry Smith and Samuel Hammond, and a high school student, Delano Middleton, were fatally shot. Twenty-eight others were injured.

While telling his story, the Voorhees president became overwhelmed with emotion and began to cry. Sellers paused briefly, then continued.

“I want people to understand the pain that some people have to go through — the sacrifices people make. It’s not a casual walk through the park,” he said.

“I think about the three young men who died and how old they would be and how they would be in life and doing different kinds of things,” Sellers said.

Following the shooting, Sellers was arrested, charged with five felonies, including conspiracy to riot, and sent to prison. He said officers could not come up with any evidence that he’d conspired to riot. He was later pardoned by Gov. Carroll A. Campbell Jr.

Historian and former journalist Jack Bass shared stories about the denials of police misconduct and the process of getting the truth and reconciliation following the Orangeburg Massacre.

Bass and jounalist Jack Nelson’s book about the shootings is titled “The Orangeburg Massacre.”

“The story has to be told so you have to kind of dry the tears and go in between and tell people about what happened,” he said. “That is a case in which it still needs attention and proper attention from the state of South Carolina.”

He referred to the Orangeburg Massacre as a “litmus test” for race relations in South Carolina.

He said it is almost sinful for S.C. State students not to be aware of the Orangeburg Massacre.

“We have to do something about that. We have to insist that people tell the story as frequently as they possibly can,” Sellers said. “Everyone has to get the information right, and then they can share that information.”

He referenced today’s Black Lives Matter movement by young African-Americans across the country who are protesting for equality and civil rights.

“If they don’t know what tactics were employed back in the day, they will have difficulty with coming up with new tactics and changing strategies,” Sellers said.

Following the program, the members of Congress and local leaders gathered to lay a wreath at the memorial to Smith, Hammond and Middleton on the S.C. State University campus.

Congressman Lewis said it was fitting and appropriate to come to Orangeburg to remember what happened to the three young men who lost their lives in 1968.

“1968 was an unbelievable year in our country. We not only saw what happened here, but a few months later, Dr. King and Robert Kennedy were assassinated,” Lewis said.

“We cannot ever forget the price that so many paid for freedom, he said.

Lewis said it is very important for students to read the story of the Orangeburg Massacre.

“Students should learn as much as they can. Watch the videos and listen to the recordings and the tapes. It is important. If we forget our history and our past, we’re bound to repeat it,” he said. “What happened on this campus must never happen again on any campus.”

The Congressional Civil Rights Pilgrimage to South Carolina is being sponsored by the Faith and Politics Institute. While touring Orangeburg on Friday, the delegation also visited Claflin University.

In addition to Orangeburg, the pilgrimage is making stops in Columbia and Charleston.

Rep. John Lewis stresses the importance of learning the history of Civil Rights in our country with T&D reporter Princess Williams.