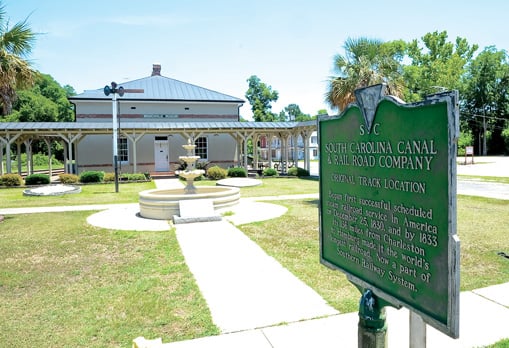 Branchville is famous as the world’s oldest railroad junction and home of the Raylrode Daze Festivul.

BRANCHVILLE — It’s said that a large, old oak tree, fried chicken, an iron horse and a fork in the road are the factors that contributed to this installment of “100 objects in 100 days.”

Settlers first came to this area of Orangeburg County around 1734 when native Dutch and Germans moved inland from Charleston to form a village at the branch in the road leading to Fort Monroe (present-day Augusta) and Granby (Cayce).

That fork in the road was said to be at a large oak tree that long gone.

Fast forward 99 years to 1833 and the steam-powered iron horse not only arrived in the settlement from Charleston but was extended on to Hamburg. Several accounts have it that a tavern owner was asked to move his establishment to the nearby depot to meet and greet weary train travelers.

Five years later, another fork was built to reach Orangeburg and St. Matthews, then called Lewisville, which created the world’s first railroad junction.

The railroad only came to the village known simply as “the branch” after several disasters had struck at the track’s origins in Charleston. The little engine that could was delivered to Charleston in late 1830. Within weeks, it suffered broken wooden spokes on a test run and was later destroyed when it an engineer shut the steam release valve causing the boiler to explode.

Undaunted, company officials extended the rail line to reach the Augusta area with the Best Friend’s successors, the appropriately named Phoenix, and later the West Point and South Carolina.

But the 15-hour trip from Charleston to the Augusta area required stops for water for the engine and food for the passengers.

In comes Philip Chartrand, owner of the Branch Inn and tavern, which accounts have it had the best fried chicken around – especially if you haven’t eaten in seven hours. The result was that when the steam engine polished the rails at the branch, a forerunner of KFC was waiting to feed hungry faces near the train depot.

At the insistence of the railroad company, the establishment named The Branch Inn should put up a different, newer sign to reflect the railroad’s presence. They wanted the tavern sign to now say “Branchville.”

The depot structure itself was nearly destroyed in 1995 by fire. But the 1870s structure was rebuilt, the museum and restaurant – said to have served presidents – re-opened in 2000.

In these days when staying inside at home seems to be the thing to do amid the coronavirus scare, you can visit interesting places and see thi…

In The Times and Democrat's new series, "Orangeburg County: 100 objects, 100 days," the county is defined through the stories of 100 objects.

We’re telling the story of Orangeburg County in 100 objects. The Times and Democrat, TheTandD.com and the project sponsors are selecting objec…

WHO designates new COVID strain Omicron as ‘variant of concern’

Branchville is famous as the world’s oldest railroad junction and home of the Raylrode Daze Festivul.