DENVER (AP) — Colorado's attorney general said Wednesday that a grand jury indicted three officers and two paramedics in the death of Elijah McClain, a Black man who was put in a chokehold and injected with a powerful sedative two years ago in suburban Denver.

McClain's pleading words that were captured on police body camera video — "I'm just different" — have been posted on signs at protests and spoken by celebrities who have joined those calling for the prosecution of the officers who confronted McClain as he walked down the street in the city of Aurora after a 911 caller reported he looked suspicious.

Stories about McClain, a massage therapist family and friends described as a gentle and kind introvert, filled social media, including how he volunteered to play his violin to comfort cats at an animal shelter.

Facing pressure during nationwide protests last year, Democratic Gov. Jared Polis ordered Weiser to open a new criminal investigation. A district attorney had said in 2019 that he could not charge the officers because an autopsy could not determine how McClain died.

In January, Weiser announced that he had opened a grand jury investigation, noting that grand juries have the power to compel testimony and documents that would otherwise be unavailable.

It was one of several investigations prompted at least in part by McClain's death, including separate reviews of McClain's arrest commissioned by the city of Aurora and a comprehensive review of the Police Department. The attorney general's office also is conducting a civil rights investigation into the agency, the first under a new police accountability law in Colorado.

Aurora's highly critical review did not find any evidence to justify officers stopping McClain as he walked home from the store on Aug. 24, 2019, after a 911 caller had reported a man wearing a ski mask and waving his hands who seemed "sketchy." His family said McClain wore the mask because he had anemia that caused him to get cold easily.

Police body camera video shows an officer getting out of his car, approaching McClain on the sidewalk and saying, "Stop right there. Stop. Stop ... I have a right to stop you because you're being suspicious."

In the video, the officer puts his hand on McClain's shoulder and turns him around and repeats, "Stop tensing up." As McClain verbally protests, the officer says, "Relax, or I'm going to have to change this situation." As the other officers join in to restrain McClain, he asks them to let go and says, "You guys started to arrest me, and I was stopping my music to listen."

What happened next isn't clear because all of the officers' body cameras come off as they move McClain to the grass, but the officers and McClain can still be heard. An officer says McClain grabbed one of their guns. McClain can be heard trying to explain himself and sometimes crying out or sobbing. He says he can't breathe and was just on his way home.

One officer eventually retrieves his camera, which shows McClain handcuffed, laying on his side and periodically vomiting as another officer leans on him. An officer who arrived later threatened to get his police dog to bite McClain.

Paramedics arrived and injected the 140-pound (63.5-kilogram) McClain with 500 milligrams of ketamine — more than 1 1/2 times the dose for his weight. The fire department is allowed to use the drug to sedate combative or aggressive people, but there's a lack of police training, conflicting medical standards and nonexistent protocols that have resulted in hospitalizations and even deaths when it's used during police encounters.

Within five minutes, according to a federal lawsuit from McClain's family, he stopped breathing. He died six days later after being declared brain dead and taken off life support.

A pathologist who conducted an autopsy said a combination of a narrowed coronary artery and physical exertion contributed to McClain's death. Dr. Stephen Cina found no evidence of a ketamine overdose and said several other possibilities could not be ruled out, including an unexpected reaction to ketamine or the chokehold causing an irregular heartbeat.

The carotid hold that was used on McClain involves applying pressure to the sides of the neck, stopping the flow of blood to the brain to render someone unconscious. It has been banned by police departments and some states, including Colorado, following Floyd's killing.

A lawsuit from the family alleges that McClain died as a result of a dramatic increase of lactic acid in his blood caused by excessive force used by police over about 18 minutes, combined with the effects of the ketamine. They claim that police continued to "torture" McClain even after he was restrained, treatment they say is a result of the department's history of "unconstitutional racist brutality."

The attorney general's announcement comes after three Aurora officers, including one involved in the encounter with McClain, were fired and one resigned last year over photos mimicking the chokehold used on the 23-year-old.

The department's new chief, who fired those officers as its interim leader, has vowed to work to rebuild public trust since McClain's death and other police encounters with people of color.

However, Vanessa Wilson spent her first days as chief last year apologizing after Aurora officers put four Black girls on the ground and handcuffed two of them next to a car that police suspected was stolen but turned out not to be.

A prosecutor later decided there was no evidence the officers committed a crime but urged the Police Department to review its policies to ensure that something similar does not happen again.

The FBI says a county coroner has confirmed that human remains found along the border of Grand Teton National Park are those of 22-year-old Gabby Petito.

Mom asks young son to keep his mask on in school, so he refuses to remove it for his school photo

When asked to take his mask down for a school picture, Mason refused. His mother describes the moment in a Facebook post.

At least three people have died after an Amtrak train that runs between Seattle and Chicago derailed Saturday afternoon in Montana.

Her fiance, Austin Eskew, said in an interview with NBC News the couple was unvaccinated due to infertility fears she had with the shot.

A shooting at a Tennessee grocery store left one person dead and 12 others injured Thursday afternoon, and the shooter was subsequently found dead.

Who is Daniel Robinson? The 24-year-old geologist has been missing for months in Arizona desert

The Biden administration's special envoy to Haiti has resigned, protesting "inhumane" large-scale expulsions of Haitian migrants to their homeland.

The U.S. moved a step closer Wednesday to offering booster doses of Pfizer's COVID-19 vaccine to senior citizens and others at high risk from the virus as the FDA signed off on the targeted use of the extra shots. 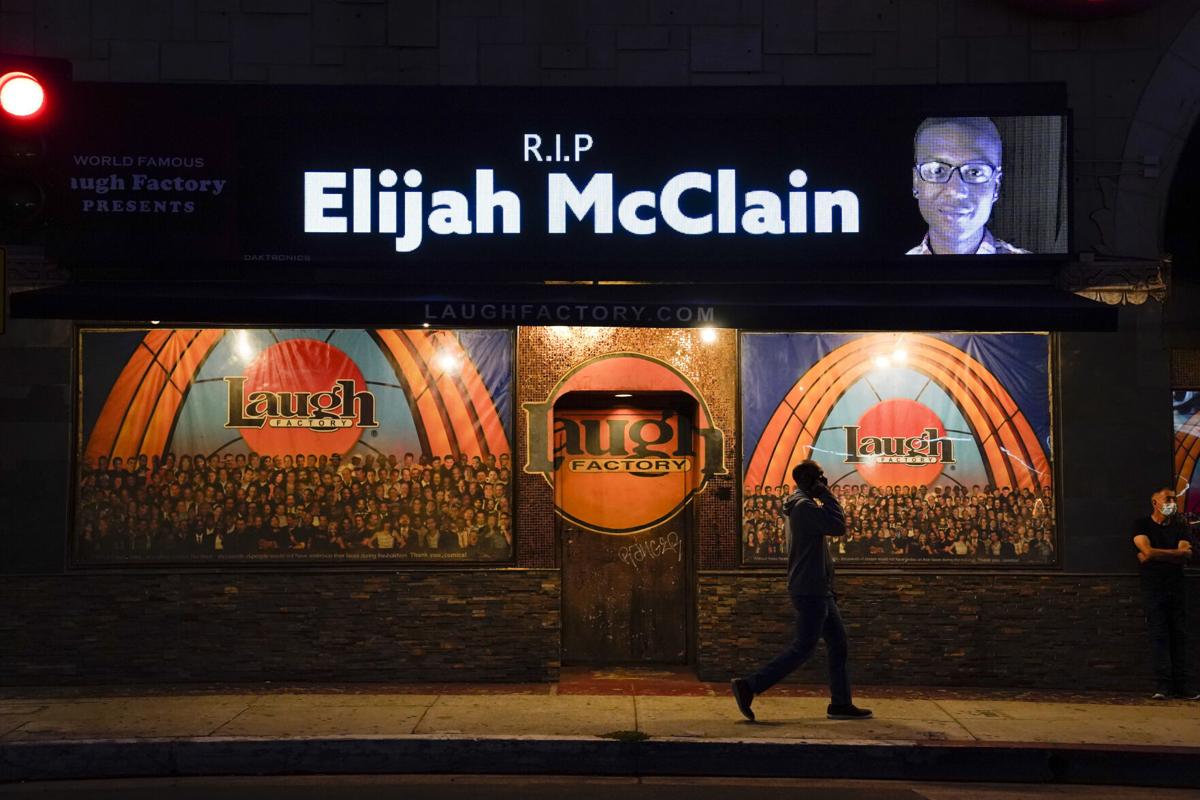 FILE - In this Aug. 24, 2020, file photo, a man walks past a display showing an image of Elijah McClain outside Laugh Factory during a candlelight vigil for McClain in Los Angeles. Colorado’s attorney general said Wednesday, Sept. 1, 2021 that a grand jury indicted three officers and two paramedics in the death of Elijah McClain, a Black man who was put in a chokehold and injected with a powerful sedative two years ago in suburban Denver. (AP Photo/Jae C. Hong, File) 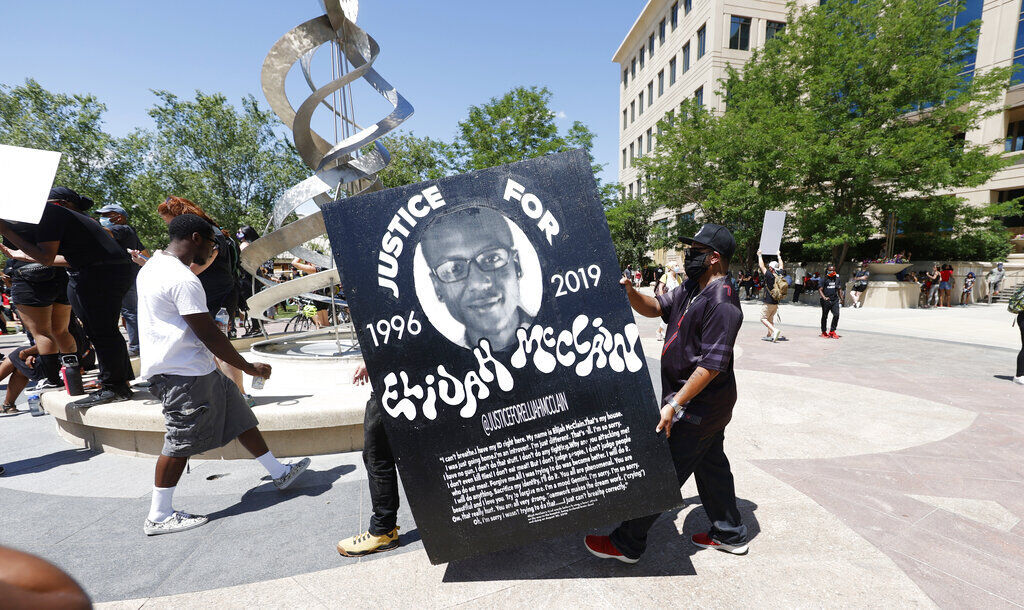 FILE - In this June 27, 2020, file photo, demonstrators carry a giant placard during a rally and march over the death of Elijah McClain outside the police department in Aurora, Colo. Colorado’s attorney general said Wednesday, Sept. 1, 2021 that a grand jury indicted three officers and two paramedics in the death of Elijah McClain, a Black man who was put in a chokehold and injected with a powerful sedative two years ago in suburban Denver. (AP Photo/David Zalubowski, File)