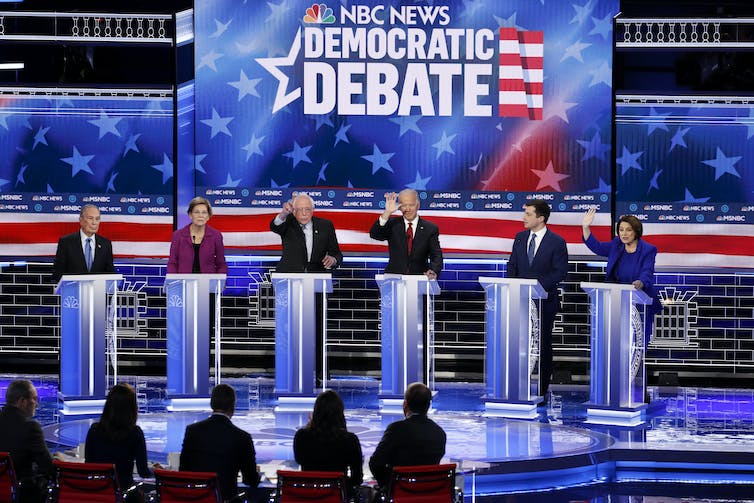 From 28 declared candidates for the Democratic Party’s presidential nomination down to just eight, many Americans are likely wondering how the party will ultimately make up its mind and settle on the best candidate.

As mathematicians, we wondered whether there might not even be a best candidate. In fact, this is an established mathematical paradox. The more candidates there are, the greater the chance there is no clear favorite.

Here’s what we mean.

Suppose there were only two candidates for some office, and that each voter preferred one or the other. Barring a perfect tie, one candidate will end up with the most votes. Ignoring complications like the Electoral College or voter turnout, the election process provides a way to measure the “will of the people.”

Now imagine there were three candidates instead of just two.

Three friends and a pollster walk into a bar and discuss the upcoming election. The first friend thinks that candidate A is better than B, and that C is the worst of all. The next agrees that B is better than C, but she thinks that B and C are both better than A. The final friend partially agrees with both of them: He thinks C is the best candidate, followed by A and then B.

The pollster cannot say which is the best candidate, since, for these voters, there is no best candidate! Their ranked preferences are inconsistent with each other.

This situation is an example of Condorcet’s paradox. It was named for the French Enlightenment philosopher and mathematician Marie Jean Antoine Nicolas de Caritat, marquis of Condorcet, an advocate of democratic reforms who perished in 1794, a victim of the French Revolution.

To Condorcet, a winner is a candidate who would win a one-on-one election against any other candidate. But, a paradox arises when there is no candidate who wins head-to-head against all opponents – which implies that voters’ ranked preferences contradict one another.

How likely is a situation like Condorcet’s paradox to arise in practice? It depends on how many candidates there are, and how evenly distributed the voters’ preferences are.

Relatively few studies have shown conclusive evidence for the Condorcet paradox in real life. But it has been observed in a number of elections, including the 2006 Danish elections for prime minister.

The possibility is not as abstract as it may seem. For example, some Americans, including Bernie Sanders, believe that, had Sanders won the Democratic primary in 2016, he would have beaten Trump in the general election. This implies an underlying rock/paper/scissors inconsistency: Trump beats Clinton; Clinton beats Sanders; but, somehow, Sanders beats Trump.

In a three-candidate race, there are six possible ways of ranking them. There is about a 9% chance the electorate as a whole has no clear preference.

With 24 different candidates running, there are 620 billion trillion possible rankings. A study by University of Delaware researcher William V. Gehrlein calculated the probability that there is no Condorcet winner, a candidate who would win a one-on-one election against any other candidate. With two dozen candidates, there will be no Condorcet winner 70% of the time.

That means that, about two-thirds of the time, there will be at least three candidates who end up in a winnerless rock-paper-scissors situation.

Condorcet’s paradox assumes a worst-case scenario, where the candidates are statistically indistinguishable from one another. In this situation, each voter arrives at their rank order randomly and independently – as if each voter secretly rolls the dice to rank the candidates.

It is unlikely that voters’ preferences are actually chosen in this random way. For example, Joe Biden might take affront to the notion that he is equally likely to be ranked first or last across all Democrats’ ballots.

Nevertheless, if Democrats appear to be having difficulty making up their collective mind this election season, it is possible that this apparent indecision is because there is no well-defined will of the people to be discerned at all.

This is an updated version of a story that originally ran on June 20, 2019.

Deep knowledge, daily. Sign up for The Conversation’s newsletter.

This article is republished from The Conversation under a Creative Commons license. Read the original article.

WASHINGTON (AP) — Mnuchin says Trump wants to send checks to Americans 'in next two weeks' in effort to curb economic cost of outbreak.

RALEIGH, N.C. (AP) — North Carolina's largest county issued a "stay-at-home" order for the Charlotte area, where cases of the new coronavirus have taken off compared to the rest of the state.

WASHINGTON (AP) — The House will give final approval Friday to the massive $2.2 trillion economic rescue bill with robust backing from both parties, Speaker Nancy Pelosi said, a vote that would cap Congress' tumultuous effort to rush the relief to a nation battered by the coronavirus.

Trump's push to open economy could come at cost of lives

WASHINGTON (AP) — The contrast could hardly be more stark. Gov. Andrew Cuomo of New York has said that if all of his sweeping, expensive measures to stem the coronavirus saved one life, it would be worth it. President Donald Trump has another view: The costs of shutting down the economy outweigh the benefits, frequently telling Americans that 35,000 people a year die from the common flu.

WASHINGTON (AP) — The U.S. government has concluded that retired FBI agent Robert Levinson, who vanished more than a decade ago, died while in the custody of Iran, his family and administration officials said Wednesday.

GLENDALE, Ariz. (AP) — The mayor of Flagstaff says her decision to close nail salons and beauty parlors is not barred by the governor's order blocking cities from expanding his list of businesses that can't be shuttered to stop the spread of the new coronavirus.

WASHINGTON (AP) — Rep. Thomas Massie has always gone his own way in Congress, ever since he first ran for office inspired by a fellow libertarian-leaning Kentuckian, Rand Paul.

Fauci says he can't stop Trump from talking at briefings

WASHINGTON (AP) — Dr. Anthony Fauci says he can't jump in front of the microphone to stop President Donald Trump from speaking at daily White House briefings on the coronavirus outbreak.

MONTGOMERY, Ala. (AP) — The number of COVID-19 infections in Alabama rose to 695 on Saturday from 638 a day earlier, with the virus spreading to 54 of the state's 67 counties. Alabama's official death toll remained at three, according to the Alabama Department of Public Health.