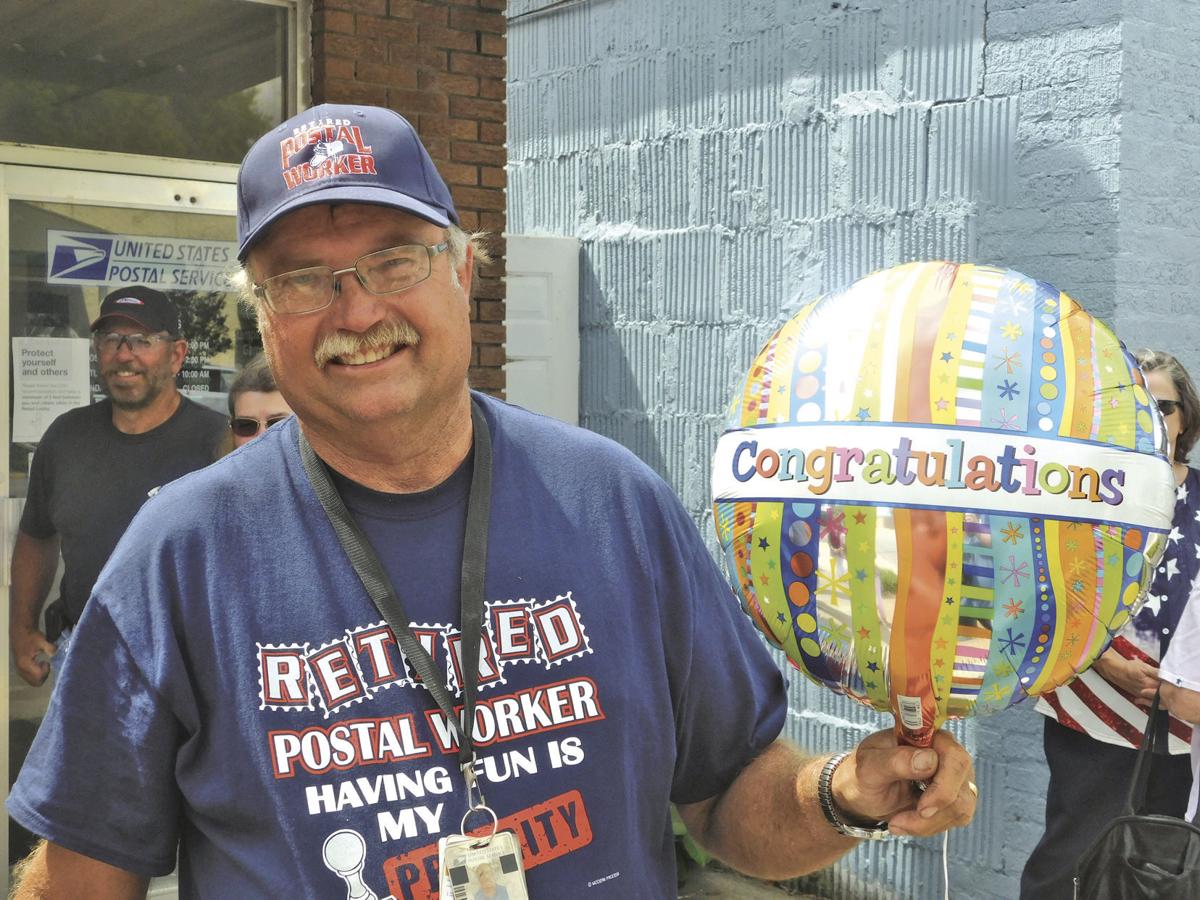 Dwain Fogle, dressed in a hat and shirt with messages about his retirement, is shown with one of his gifts during his retirement celebration and ceremony May 15 in Norway. 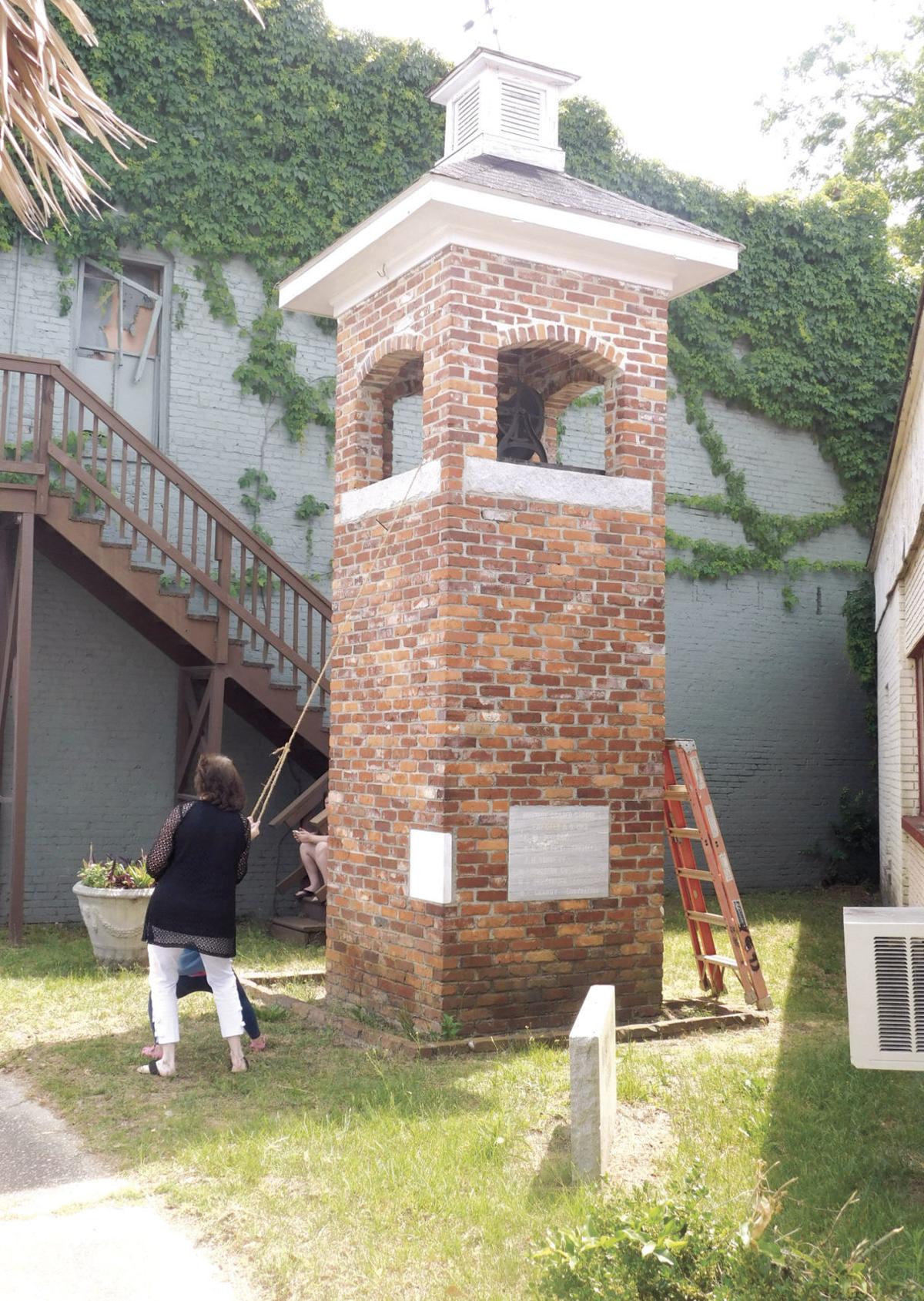 Katie Fogle rings the bicentennial bell in Norway during the retirement recognition on May 15 for her husband, Dwain Fogle, who completed his final drive as a rural carrier after 40-plus years with the U.S. Postal Service. 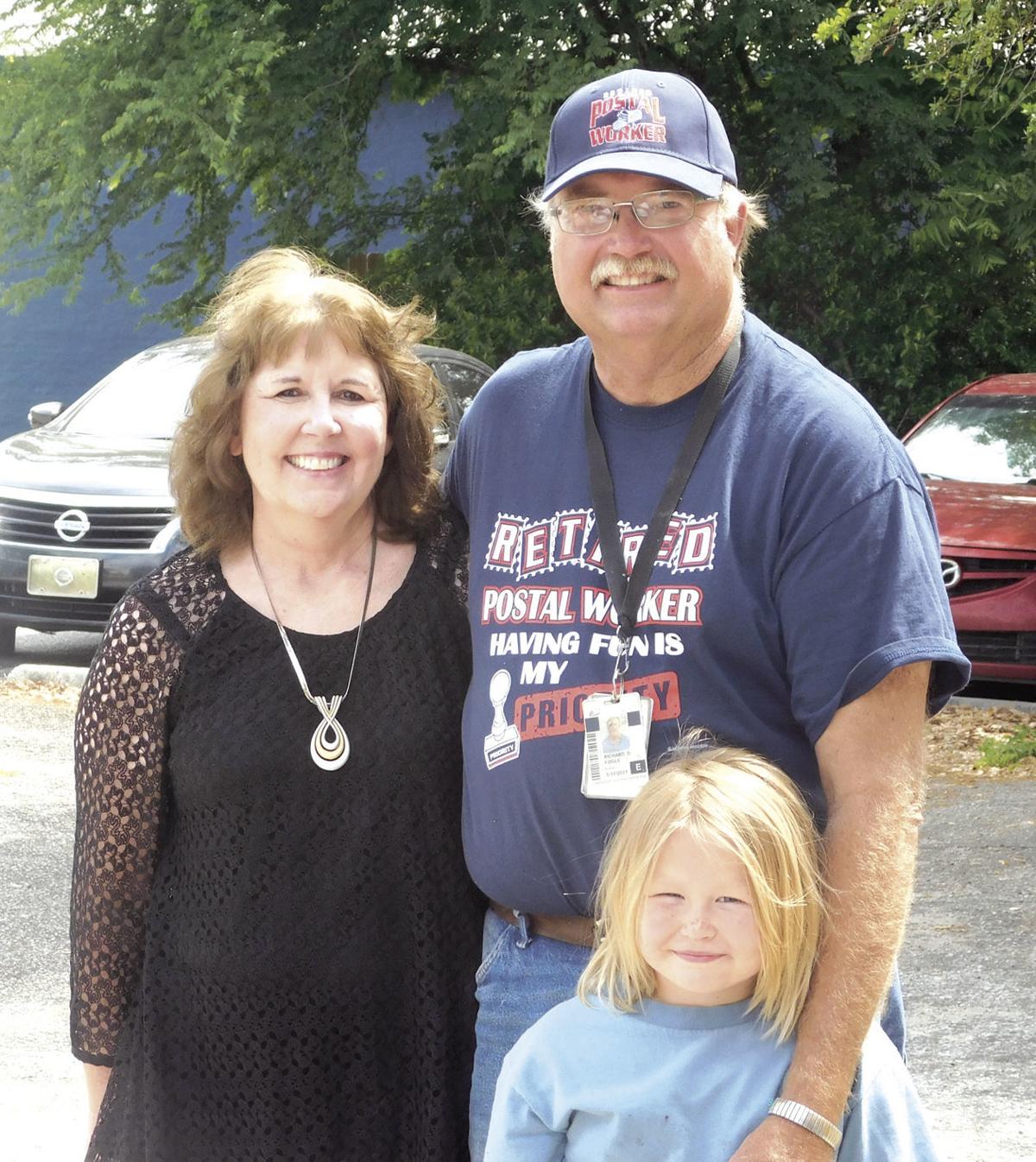 Katie Fogle, Dwain Fogle and their granddaughter, Annabelle, are shown during the recognition of Mr. Fogle’s 40-plus years as a rural carrier. 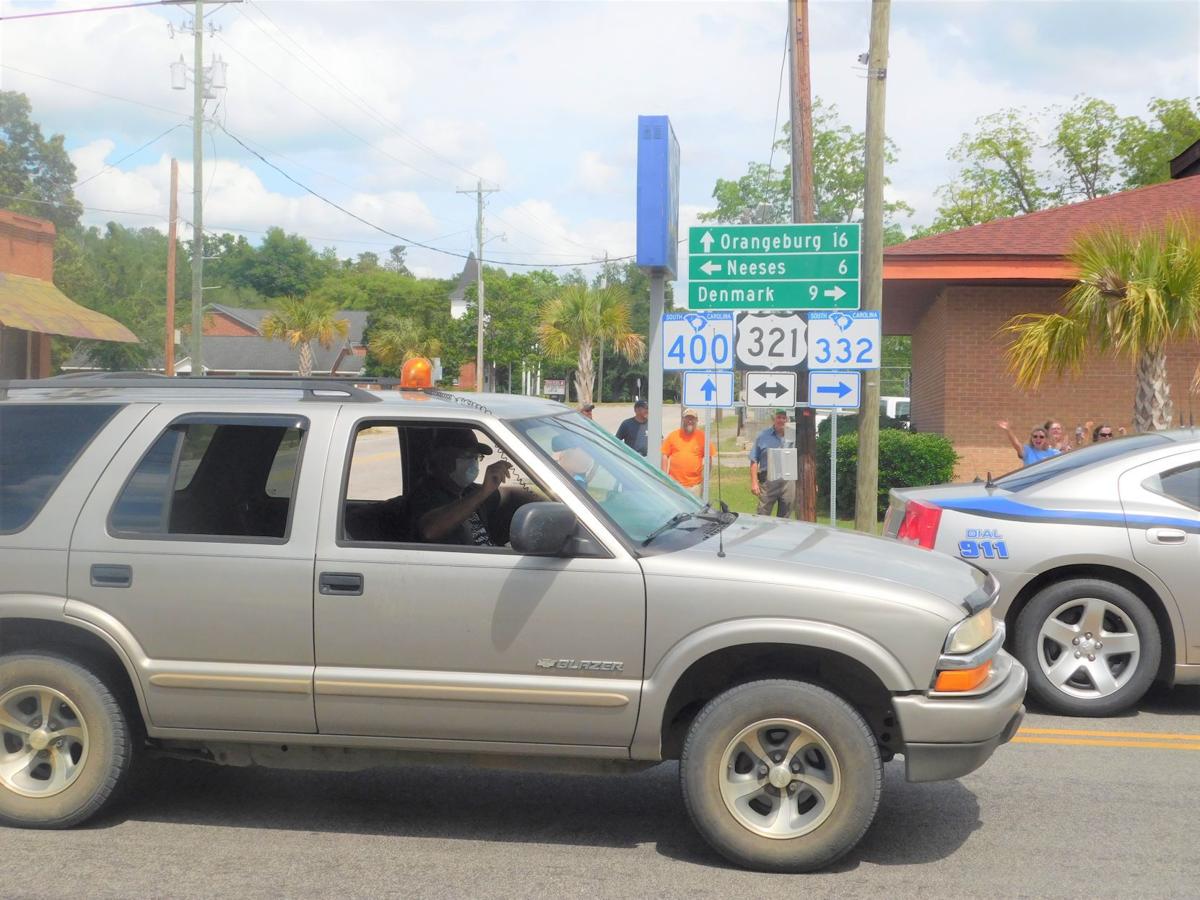 Dwain Fogle takes his final drive as a rural carrier on Friday, May 15 with over 30 friends, family, church members and dignitaries watching from both sides of Highway 321/Savannah Highway.

NORWAY – The bicentennial bell in Norway, erected in 1976 for the 200th anniversary of the founding of the nation, was rung in recognition of Dwain Fogle as he finished his route on his last day as a rural mail carrier.

Fogle retired on May 15 after 40-plus years with the U.S. Postal Service.

A crowd of more than 30 relatives, friends, church members and dignitaries lined both sides of Highway 321/Savannah Highway to greet Fogle as he drove back to the post office after finishing his route.

Chief Bradley Wilke from Norway and Chief Timothy Wilke from Springfield had police cruisers positioned with flashing lights on several blocks in downtown Norway to slow traffic for the recognition ceremony. Norway Mayor Tracie Clemons helped coordinate the recognition event along with Katie Fogle, Dwain's wife, and was present during the ceremony.

Dwain Fogle was greeted at the post office with applause from the gathering crowd. He was presented gifts, including a congratulatory balloon and a gift card to Cracker Barrel.

Thirty-two years of Fogle’s time with the USPS was spent in Norway. He twice received awards from the National Safety Council for driving a million miles without an accident.

“I got one at 30 years and another at 40 years. It means a lot to me because my father got one," Fogle said of the awards.

Dwain's father was also a postal worker and farmed after retiring from his position.

Dwain said he always wanted to stay with the post office a little longer than his dad. He exceeded that goal by two years.

According to a story in The T&D when Dwain Fogle received his first award, he was traveling to 451 homes across approximately 90 miles each day. The mileage has not changed, but the number of homes has increased.

Fogle said he has had many memorable experiences but perhaps the most memorable involved somebody on his route: “I had a lady who had a heart attack. I stayed with her and held her until the ambulance came. She later passed away.”

One of the classic references to postal work in popular culture is the sometimes shaky relationship between carriers and dogs.

“I had good and bad experiences with dogs,” Fogle said. “Two pit bulls bit two of my tires and put holes in them. They gave me flat tires. The person who owned the dogs ended up buying me two new tires at the service station. I have several dogs on my route that I am pals with, though.”

Norway hopes HGTV will give the town a makeover

According to the USPS website, the Postal Service has no official motto, but there is a well-known quote chiseled above the New York City Post Office on 8th Avenue that is said to be a tribute to postal workers: “Neither snow nor rain nor heat nor gloom of night stays these couriers from the swift completion of their appointed rounds.”

Fogle said that over the years he did deliver mail in snow and ice, and even during Hurricane Hugo in 1989.

“The Postal Service was a good way of making of living for my father and me. They are good people to work for. I was happy when I got on,” he said.

Fogle started with the USPS at age 19. “I started as an emergency hire in Orangeburg. In 1980, I took the civil service exam.”

Katie Fogle elaborated: “Dwain was hired as a regular substitute rural carrier in Orangeburg in 1980, which is when his career officially began. In 1988, he transferred to Norway and became a full-time rural carrier.”

Dwain said the years of his service were different than his father’s because of changes in technology.

“Technology has changed. One of the best things is DPS – delivery point sequencing. They sort our letters for us. We used to do our own sorting,” he said.

Fogle also farms and is going to continue after his retirement.

Katie Fogle said, “Dwain will retire and farm full time. The farm is truly a special love for him, so no one has to worry about Dwain becoming bored. He enjoys growing peanuts, soybeans, hay and cotton. He also raises cattle.”

Tish Goodwin, owner of Flowers by Tish of Norway, was present during the roadside recognition and ceremony along with other friends, including the owners of Gibson’s Food Station and the Horizons gas station, and members of First Baptist Church of North, where the Fogles attend church.

Goodwin said, “Dwain delivered mail to me for 20 years. When special holidays came up, he always ordered something special for his wife from me. He was prompt with the mail and with picking up his flowers.”

Mayor Clemons said, “Many congratulations to Mr. Fogle on his journey of serving Orangeburg County and the citizens of Norway for 32 years of his 40-plus tenure. We appreciate him for being a dedicated servant. Mrs. Fogle is the light of the beacon, and I thank her for reaching out with such a phenomenal idea to celebrate her husband.”

Katie Fogle added, “Throughout the years, Dwain has talked with pride about the citizens of Norway. He has enjoyed serving them, watching them grow, and doing anything for them that he could do to help make their life a little better for the brief moment he spent with them. He will have memories and stories to share forever.”

She concluded, “I am very proud to celebrate this milestone with my husband.”

Dwain Fogle, dressed in a hat and shirt with messages about his retirement, is shown with one of his gifts during his retirement celebration and ceremony May 15 in Norway.

Katie Fogle rings the bicentennial bell in Norway during the retirement recognition on May 15 for her husband, Dwain Fogle, who completed his final drive as a rural carrier after 40-plus years with the U.S. Postal Service.

Katie Fogle, Dwain Fogle and their granddaughter, Annabelle, are shown during the recognition of Mr. Fogle’s 40-plus years as a rural carrier.

Dwain Fogle takes his final drive as a rural carrier on Friday, May 15 with over 30 friends, family, church members and dignitaries watching from both sides of Highway 321/Savannah Highway.