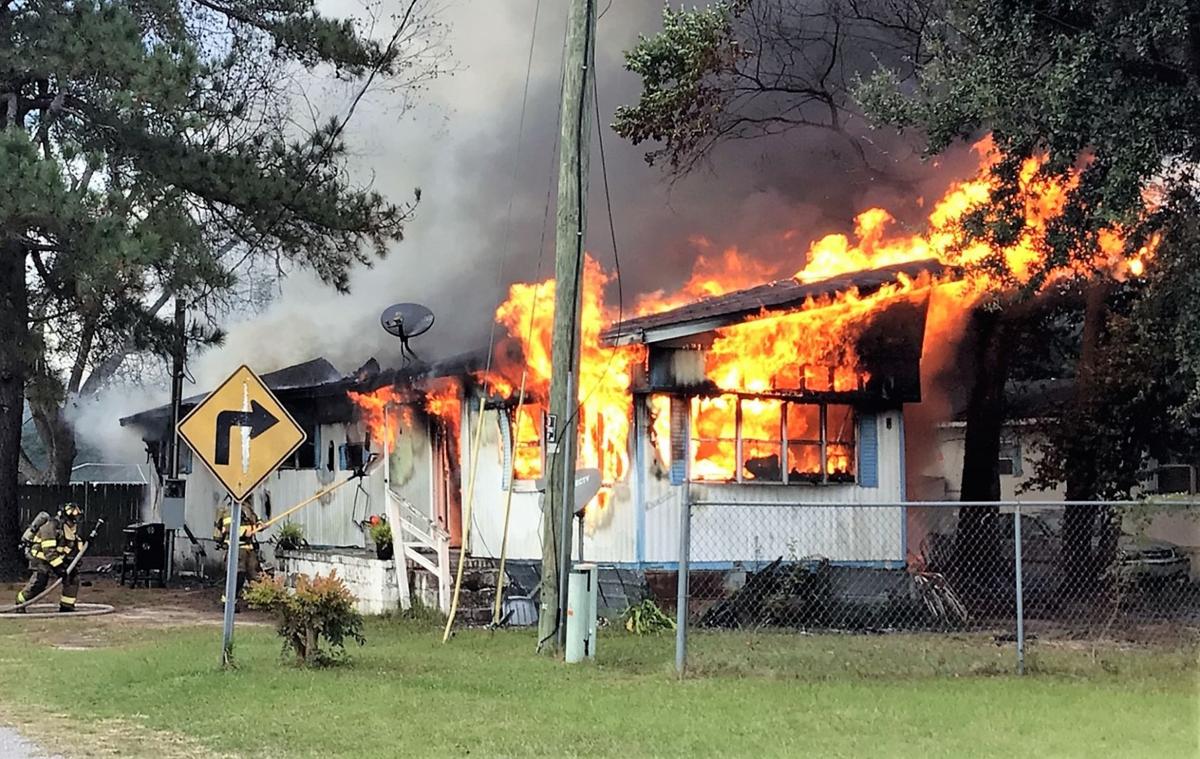 Fire destroyed this home on Lawton Street on Wednesday afternoon. View video of firefighters battling the blaze at TheTandD.com. 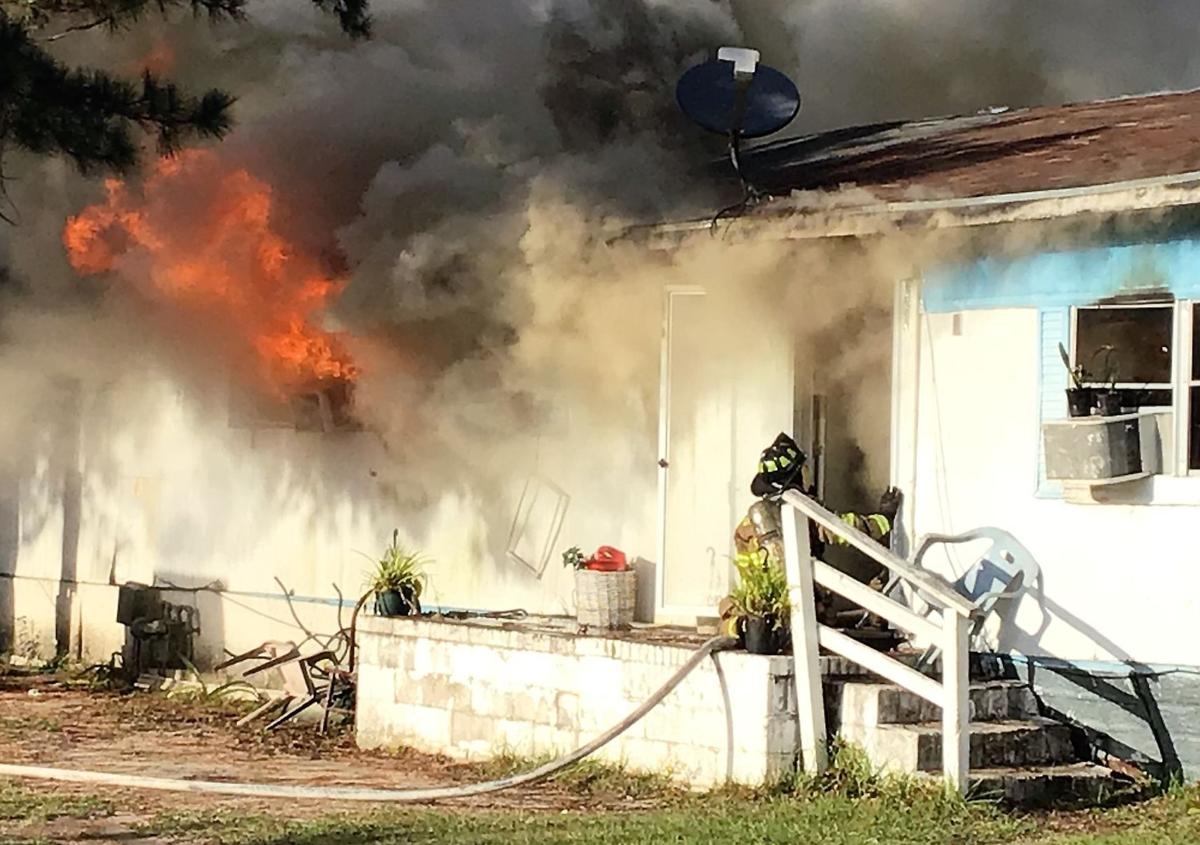 Fire destroyed a home and vehicle on Wednesday just outside of the city limits of Orangeburg. The blaze also damaged a power pole and a neighbor’s residence and vehicle.

According to an Orangeburg Department of Public Safety fire report, an alarm call rang out at 3:28 p.m. with firefighters arriving four minutes later.

When firefighters arrived, they saw heavy smoke and flames coming from one end of the single-wide mobile home on Lawton Street.

They also noticed a small grass fire across the yard that set a nearby wooden fence on fire. Two vehicles and another mobile home were close to the fire and became exposed, the report states.

One fire engine deployed two hoses of water to make entry into the home and to protect other items from further exposure.

Three more fire engines began shuttling water to the scene because there wasn’t a nearby hydrant.

Firefighters extinguished the fire at the mobile home, but there were several hot spots remaining because the home collapsed on itself.

That’s when ODPS Lt. Anthony Robinson called for the city’s tractor to pull debris apart, which gave the firefighters better access to the hotspots.

At one point, the Orangeburg Department of Public Utilities responded to the scene to check out a power pole which sustained fire damage.

Later, DPU’s gas division responded to the fire due to a broken gas line that firefighters discovered during the salvage and overhaul of the destroyed home.

The report states that a Chevrolet Impala parked behind the burned home also sustained damage after it caught fire.

In addition, the heat from the fire melted the taillights of a Volvo parked next door as well as the neighbor’s vinyl siding.

The cause of the fire remains undetermined.

Neither the homeowner nor firefighters were injured.

Over the past week, there have been additional fires throughout the T&D Region. One of the fires claimed the life of a 22-year-old man.

The S.C. Law Enforcement Division is assisting with the fire investigation of that fatal blaze that occurred at 1618 Binnicker Bridge Road in Cope on Saturday night.

The Orangeburg County Sheriff’s Office is investigating the death of the man found inside. A sheriff’s office spokesman says no foul play is expected.

Also, the American Red Cross is assisting several families whose homes were damaged by fire. Volunteers with the organization are providing financial assistance for food, clothing, lodging and other essentials, and comfort kits containing personal hygiene items.

On Thursday, ODPS responded to a fire at a Felder Street home. The Red Cross is assisting one family affected by the fire there.

In Ehrhardt on Saturday afternoon, the Ehrhardt Fire Department put out a house fire on Colston Road. The Red Cross is assisting a family of five.

Late Sunday night, fire damaged a Sonic Drive home in Orangeburg and ODPS put out the fire. The Red Cross is assisting five people there.

• Install smoke alarms on every level of your home, inside bedrooms and outside sleeping areas.

• Test smoke alarms every month. If they’re not working, change the batteries.

• Talk with all family members about a fire escape plan and practice the plan twice a year.

• If a fire occurs in your home, get out, stay out and call for help. Never go back inside for anything or anyone.

The State Fire Marshal has previously offered the following tips:

• Only use kerosene heaters and space heaters according to the manufacturer’s instructions. Inspect the heater for cracked or broken plugs. If frayed, worn, or damaged, do not use the heater. Never leave heaters unattended. Always plug the space heater directly into the wall, not an extension cord or power strip; unplug when not in use.

• Be careful when using candles and keep them out of reach of children and pets. Since it is an open flame, never use a candle if oxygen is used in the home. Use sturdy candle holders and extinguish upon leaving a room or going to sleep.

• Since they are much safer to use than candles, have flashlights ready to use in case of a power outage.

• Make sure the fireplace has a sturdy screen to stop sparks from flying into the room. Only burn seasoned and dried wood. During the holiday season, avoid hanging decorations around the fireplace area. Never burn wrapping paper in a fireplace; it burns too fast and hot to be controlled. Wait until ashes are cool before putting them in a metal container. Keep the container a safe distance away from your home. Never put ashes in a cardboard box or bag.

• Chimneys should be cleaned and inspected every year by a qualified professional. If not, they can become filled with highly flammable layers of creosote.

• Do not use the kitchen stove or oven to heat the home. Neither are designed to heat large areas, and the element may fail, causing a fire. Never leave food cooking on the stove unattended.

Three Wilkinson Avenue residents were displaced Monday morning when a tree fell on their home.

Fire destroyed this home on Lawton Street on Wednesday afternoon. View video of firefighters battling the blaze at TheTandD.com.