Become a Member
Read Today's E-edition
Share This
Todd: ‘Together we can transform this college’; investiture ceremony held for DTC president
0 comments
Share this
1 of 2 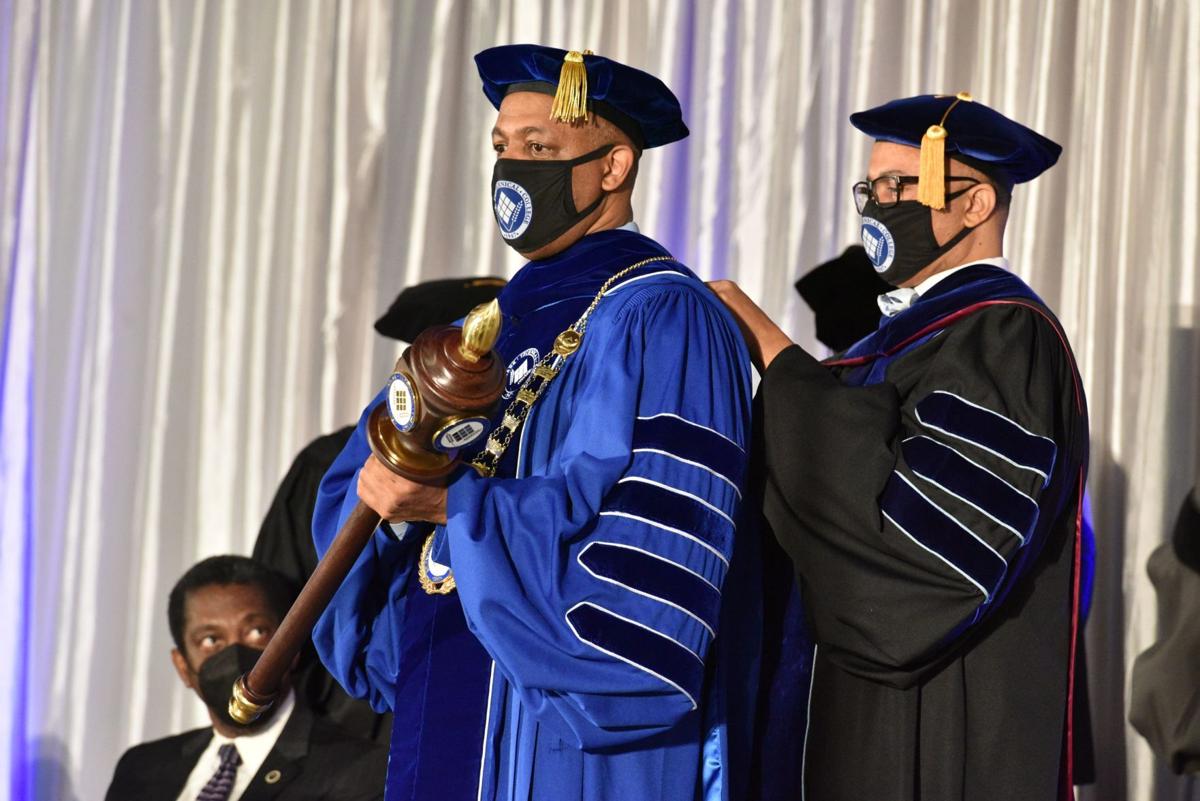 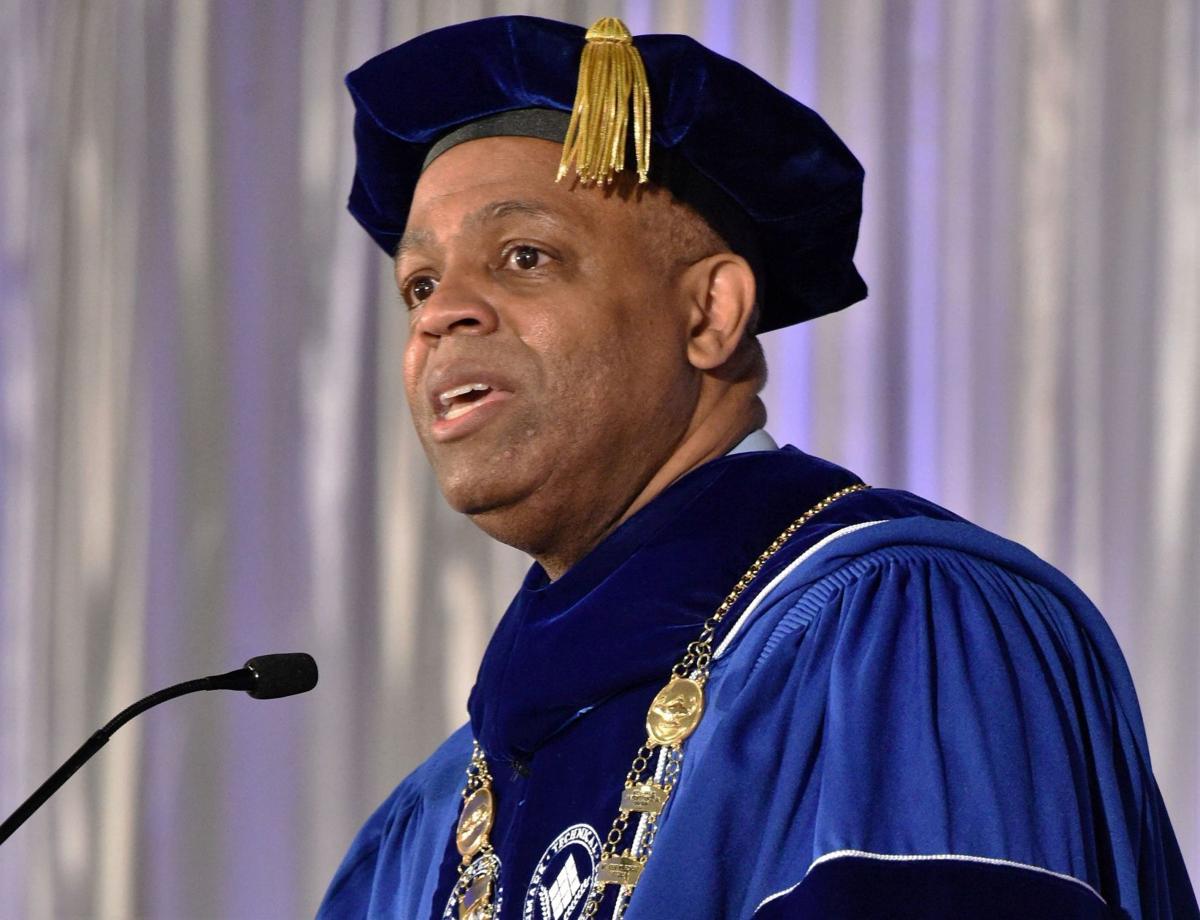 The investiture ceremony celebrating the installation of Dr. Willie L. Todd as president was held at the William L. McDuffie Student Services Center.

DENMARK – The president of Denmark Technical College says he plans to continue transforming the state's only historically black technical college.

“My goal very simply is to become a premier technical college and put the tech back in Denmark Tech,” Dr. Willie L. Todd Jr. said during his investiture ceremony on Friday.

He said, “This means to be more mission driven, this means to have more pride in Denmark Tech, this means to ensure that our academics are bar none, this means that our graduates are acutely aware, distinctively prepared and perpetually affiliated with the college.”

Todd formally received the authority and symbols of the office of president during a morning ceremony held in the William L. McDuffie Student Services Center. He has been president since January 2020.

Todd said Denmark Tech has to think and work differently to make way for improvements.

“We've made countless upgrades to the campus, including new furniture in all of the classrooms, sweeping technology upgrades across the campus, and the renovation of two of our residence halls. Just this semester, we put all new furniture and equipment in our barbering lab and in our cosmetology lab,” he said.

The college is working on building a new health and sciences occupation facility to prepare more professionals to enter technical fields and provide services to the local community and beyond, Todd said.

“We're providing engaging, quality co-curricular activities that cultivate the building of relationships, which retain students on campus and help them to be more focused on their goals. This year we're adding two new sports, men and women's soccer,” he said.

The college is also putting a focus on diversifying its student population.

“Our doors are open to everyone. Yes, we are a historically black college. We can't change our history and we would not want to, but we're open to everybody,” Todd said.

“We created what we call the Panther Pathways program in the Division of Academic Affairs, which basically gets students from the first day that they arrive and works with them until seven years beyond graduation. That's where that perpetual affiliation comes in at.

“We believed even when we knew that our reputation in the past had been compromised and many had counted us out, we set out to go past the issue. We forged relationships, created a new partnership with Apple and Tennessee State University to bring coding and creativity to our students and community,” he said.

He continued, “We signed memorandums of agreements and received donations from Savannah River Remediation, Savannah River Nuclear Solutions, that will lead to a wealth of opportunities for our students to work, learn and serve, even providing in conjunction with our foundation a van that will transport students to internships and apprenticeships at their sites.”

Partnering with school superintendents, principals and counselors has also been key, he said.

“They are all amazing and dedicated to providing quality access for their students. ... I'm excited about us moving forward,” Todd said.

A new fundraising arm has also been instituted at the college as it, “comes closer to how we can improve relationships and increase communication with our alumni,” Todd said.

“Now we've been able to raise hundreds of thousands of dollars supported by our institution. ... Denmark Technical College is a place where love is light that surely glows, a place of inclusivity, which is the mantra of many of our HBCUs, giving everyone who is willing a chance to receive a quality, lucrative education,” Todd said.

Increasing enrollment, enhancing academics and inspiring technological advancement; renewing a commitment to the community and social justice; rebranding and strengthening communication infrastructure and establishing a sustainable financial model are all tenets of the college's strategic vision.

“As some threatened to close the college due to financial woes and declining enrollment, there are also many seated here today that refused to let that happen. They knew the importance of saving South Carolina's only black technical college and the vital role it plays in the community. We're grateful for all of those who advocated on our behalf,” Todd said.

State representatives Jerry Govan, D-Orangeburg, and Lonnie Hosey, D-Barnwell, were among the legislators on hand at the ceremony. Both presented Todd with a House resolution in recognition of his service to the college.

“I believe the future of Denmark Technical College is in excellent hands and under your leadership is going to grow,” Hosey said.

“We all need each other, and Denmark Technical College is doing what's necessary to fulfill those needs,” Clyburn said.

Also on hand were Dr. Tim Hardy, president of the South Carolina Technical College System, and Dr. Rusty Monhollon, president and executive director of the S.C. Commission on Higher Education.

DTC Student Government Association President Jordan Blanding said Todd had made critical improvements to the college in a short time with his “passion for excellence” and commitment to student success.

“We the students are excited,” Blanding said.

DENMARK – Denmark Technical College’s Dr. A. Clifton Myles has been selected to participate in the White House Initiative on Historically Blac…

Rockies winter starts with a whimper

Rockies winter starts with a whimper

Researchers finally figured out why cannabis smells like skunk

Researchers finally figured out why cannabis smells like skunk

The investiture ceremony celebrating the installation of Dr. Willie L. Todd as president was held at the William L. McDuffie Student Services Center.