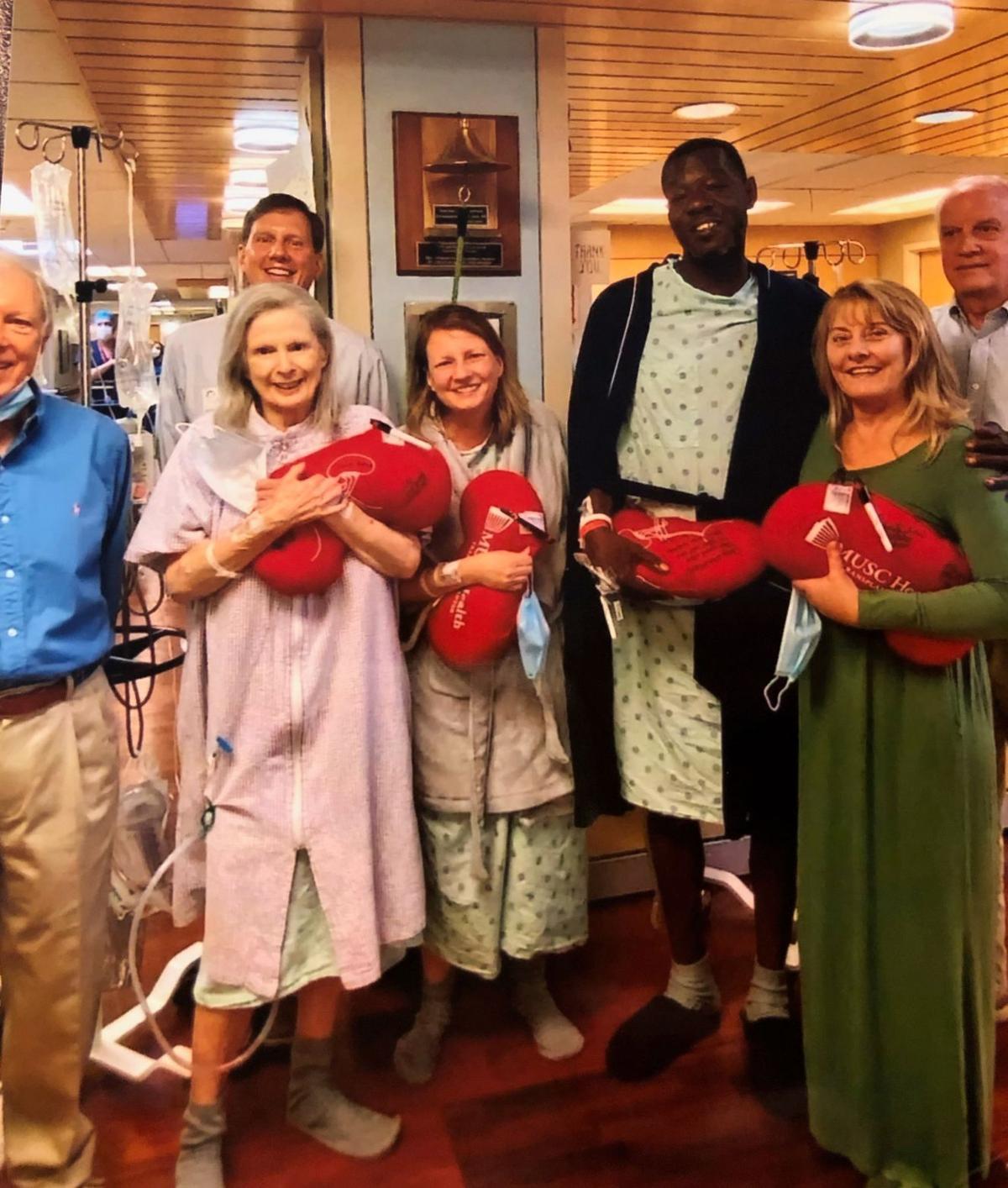 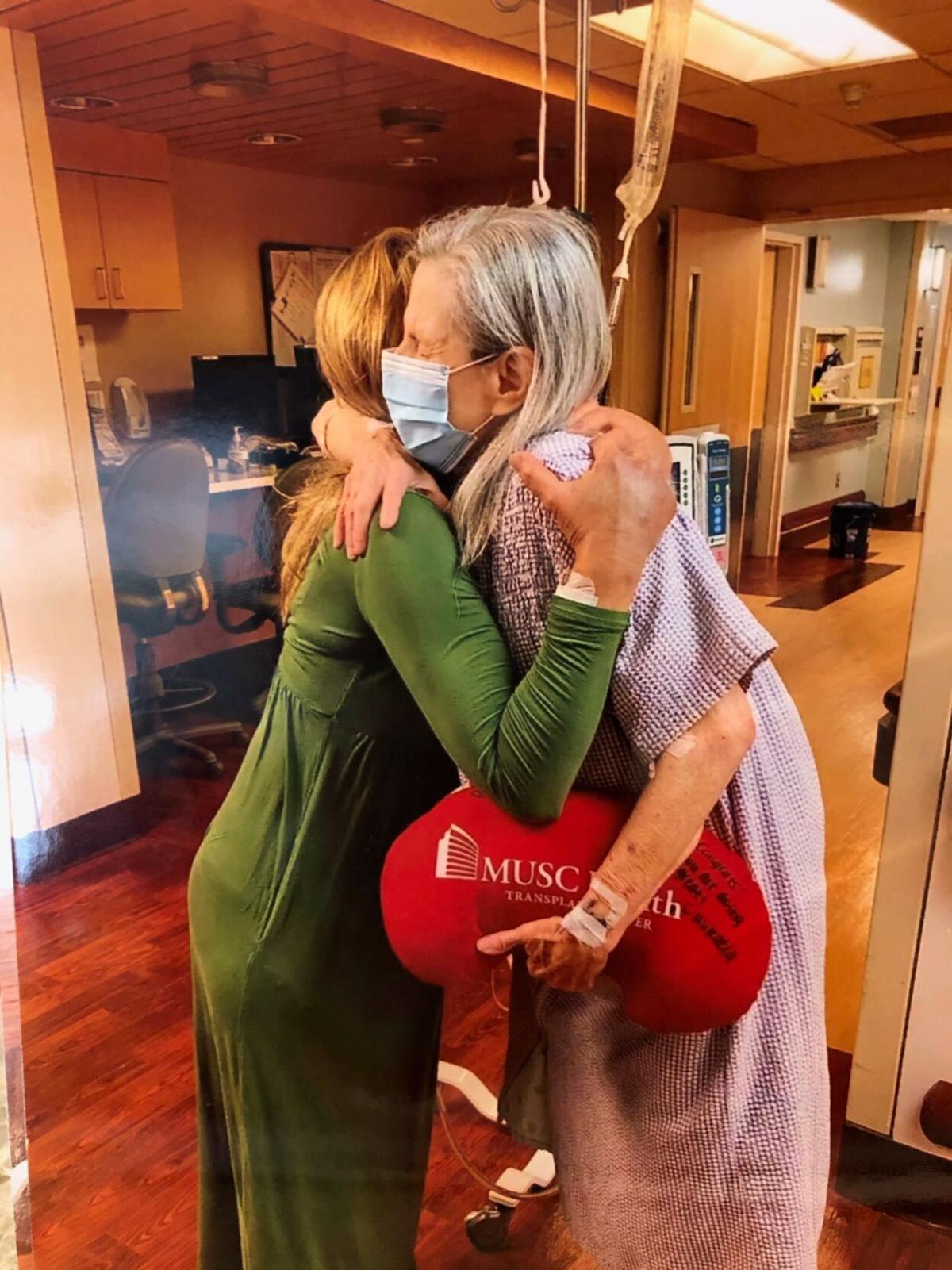 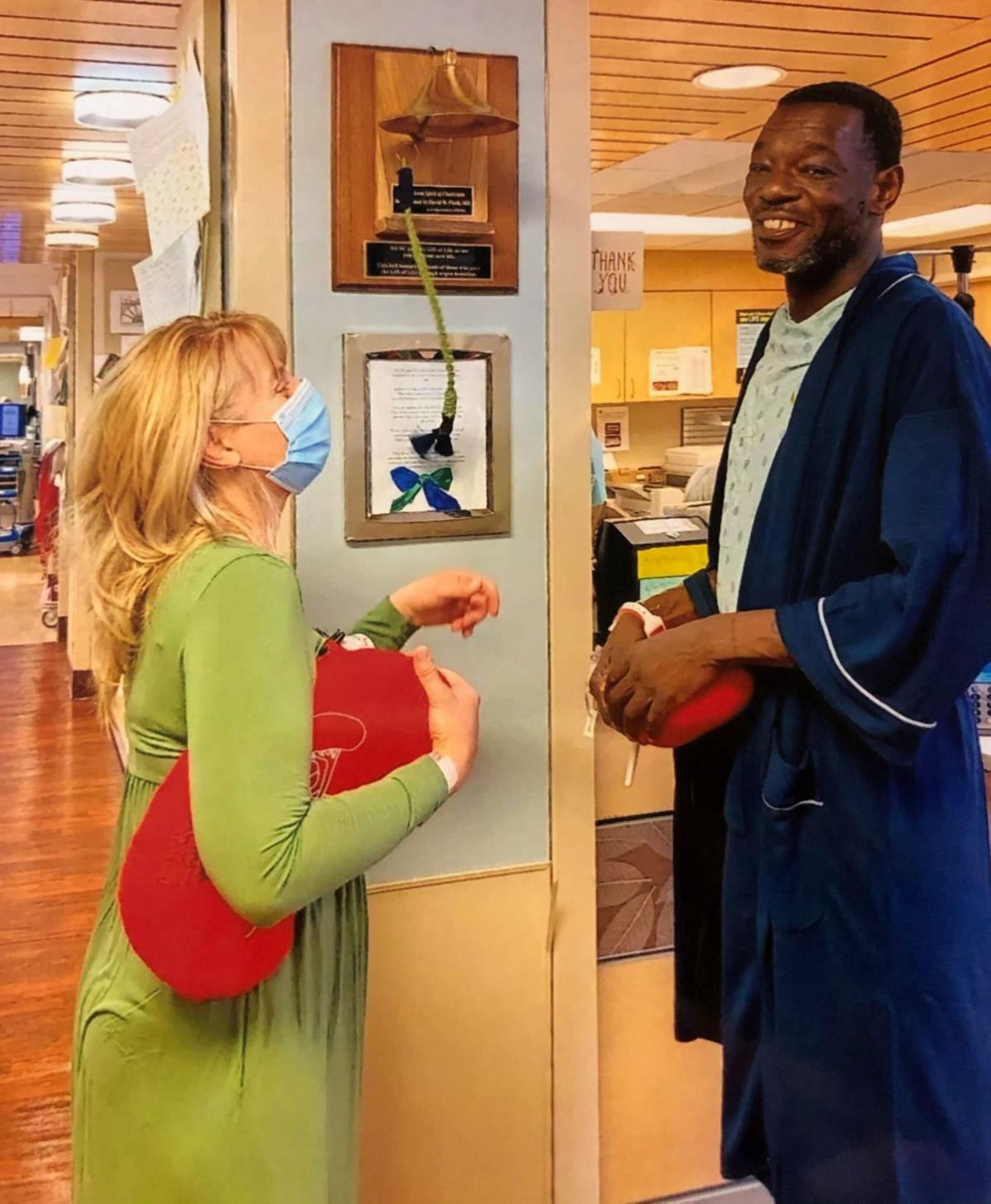 Regional Medical Center primary care provider nurse practitioner Connie Simons and Chris Lewis exchange smiles after ringing the bell on the transplant floor of the Medical University of South Carolina in Charleston the day after they had surgeries on Nov. 4, 2020.

The Holly Hill 48-year-old father of four needed strength to return to a career he loved as an avionics technician.

His dialysis appointments were three days a week, with four hours for each visit.

He’d been doing that for two-and-a-half years.

'People call me just about every day': Bowman man continues handiwork at 84 with smile

“He’d done everything right and for some reason, it came to a screeching halt,” said Lewis’s primary care provider at the time, nurse practitioner Connie Bennett Simons of RMC Primary Care in Holly Hill.

“All he needed was this one thing to get back his life and to get going again,” she said.

Lewis lost one of his kidneys when he was 23 after someone shot him in the back three times with a .357-caliber gun at a Bowman club party in 1994, he said.

He’d been depending on his remaining kidney ever since, but the past few years have been troublesome.

“My other kidney went bad because of high blood pressure,” he explained.

Lewis said the worst day of his life was when his kidney specialist told him he’d have to start dialysis treatments.

But around late February 2020, Lewis said he experienced the best day of his life.

His mother called him, “You need to come home, Ms. Connie said she wants to give you one of her kidneys,” she said.

He was in Arkansas docking jets.

Lewis said he returned home, visited Simons at her office and she told him herself that she wanted to give him one of her kidneys.

“I really wanted to break down and cry,” Lewis recalled.

Simons said she had tears in her eyes, as did Lewis, when she told him.

He asked her, “Why would you do this?”

She told him, “Chris, you’re special.”

“I am a praying person. I don’t know if you are or not,” she told Lewis.

“Well, that’s going to be a part of it. If it’s supposed to work out and it’s in God’s will, if it’s not, then something will come up and you’ll have to take another route,” she told him.

The beginning of this journey was when Lewis first became her patient, she said, and they formed an instant connection due to some of their shared experiences.

When Simons was a student there, she was one of Behr’s German language students too.

In addition, Behr was her pastor at First Baptist Church of Holly Hill.

“We just really had a good time talking about that,” she said.

As time went on, and Lewis’s one functioning kidney began to fail him, she asked him if he’d been able to find a donor.

“And the thought occurred to me, ‘I have two kidneys and this guy needs one and I don’t need but one,’” she said.

As she continued her drive home, she became more excited thinking about the possibility that she could give Lewis a chance, just by giving him one of her kidneys.

When she got home, she said to her husband, “James, I need to tell you something. I’m thinking about this and this is just a thought and I know it sounds crazy, but I met this guy who needs a kidney and I’ve got two. I really feel like I’ve been called to go and investigate that.”

Her husband looked at her and said, “Connie, if you feel that way, that’s God, so you have my full support.”

“If that’s what you’re called to do, it’ll work out,” her husband said.

The next day, Simons called the transplant coordinator at the Medical University of South Carolina in Charleston to discuss the process of being a living kidney donor.

The coordinator explained the process to her.

“I thought, ‘There are so many stages to go through, there’s no way in the world I’ll be approved, but let’s go for it,’” Simons said.

She next called the Regional Medical Center before going any further in the process.

After getting clearance and full support from her employer, she then told Lewis about wanting to give him one of her kidneys during that memorable visit at her office about a year ago.

Her practicing partner, Matthew Kunkelman, PA-C, pledged full support as did the staff at RMC Primary Care in Holly Hill.

“It was like a roller coaster ride and I kept thinking, ‘I don’t know where I’m going to get off of this thing, but it was wonderful,’” she said.

Around 9 a.m., she was making final personal preparations for surgery when her phone rang.

“You’re supposed to be in the operating room,” they said.

Someone was supposed to have called Simons the night before to let her know the surgery time changed to 9 a.m.

She and her husband gathered what they needed and hurried to MUSC.

“I just remember thinking, ‘I can’t wait, I can’t wait. Hurry up! Hurry up! Let’s get there,” she said with laugh of excitement.

She had the option to back out if she wanted, she said, “I knew I was in good hands.”

Similarly, Lewis said he felt excited on the day of surgery.

“I wasn’t nervous at all because I really wanted it inside of me,” he said.

“I really wanted to feel back normal again. Dialysis takes so much out of you,” he added.

Lewis and Simons didn’t see each other that day, but they did the day after.

She also learned that although she’d hoped to give her kidney to Lewis, he ended up receiving the kidney of a Mason Kapp who’d flown from California to donate to her mother, Jane Alan Kapp, from Columbia.

Simons, Lewis and the mother-daughter pair each underwent surgeries at the same time.

Simons explained that the MUSC donor program requests donors to consider participating in a “swap.”

“So that if your kidney matches a different patient better, that they can use your kidney if you have another recipient whose donor’s kidney doesn’t match perfectly, you can do a swap so that your recipient does get a kidney, but it might not be yours,” she said.

“We all met the following day and were able to hug each other and ring the bell and do all of the traditional stuff at MUSC to commemorate that exciting occasion. It was fun,” Simons said.

“I wasn’t hurting,” Lewis said of how he felt after surgery, “I felt like a brand new baby.”

Simons recalled waking up after surgery thinking, “This hurts.”

But the pain was under control at the hospital and managed at home as she recovered there.

Both of them worked individually to get their strength back.

“I got all of my energy back and I’ve started doing push-ups again,” Lewis said.

Simons was away from work about six weeks and has since returned. She feels just as well as she did prior to surgery.

Lewis thinks of Simons and Mason Kapp as his angels.

“They were God-sent,” he said.

For others who are undergoing health issues that will improve by having a kidney donation, Lewis said, “Definitely be strong. Don’t give up and stay focused on what you need to do. Stay in the guidelines and trust God.”

Simons urges healthy individuals to consider donating one of their kidneys, if possible.

She said there are some kidney donors who give one of their own without knowing who will receive it.

“From the very beginning, I really felt like it wasn’t my idea,” Simons said, “it was like a tap on the shoulder.”

“I always felt like it was God’s idea and he was leading me to do that,” she said.

“I was just going with the wave of ‘This is the plan. You’re in it. Chris is in it.’ It’s not about me, it’s about working things out so another person can get what they need," she said.

A person was found dead on Fair Street after reports of shots being fired just before 2 a.m. Tuesday, according to an Orangeburg Department of…

A person was killed when shots were fired into a home near Santee, according to Orangeburg County Sheriff’s Office spokesman Richard Walker.

A St. Matthews man is accused of raping a woman in an Orangeburg motel room, according to a warrant from the Orangeburg Department of Public Safety.

A 43-year-old Cameron woman succumbed to injuries she sustained in an early morning shooting on Saturday in Santee.

Orangeburg teens in custody after man robbed at gunpoint

Two Orangeburg teens are in custody after a man was robbed at gunpoint.

Orangeburg’s Bi-Lo is scheduled to close its doors March 21, paving the way for Food Lion to move in.

A 23-year-old Orangeburg woman is accused of using her vehicle to hit a woman holding a 1-year-old child.

Two men are each facing a murder charge in the death of a Summerville man who died last month after he was shot multiple times in Vance.

Regional Medical Center primary care provider nurse practitioner Connie Simons and Chris Lewis exchange smiles after ringing the bell on the transplant floor of the Medical University of South Carolina in Charleston the day after they had surgeries on Nov. 4, 2020.