‘The Lord was part of the process’; Habitat for Humanity dedicates 85th home
0 comments
Share this
Return to homepage × 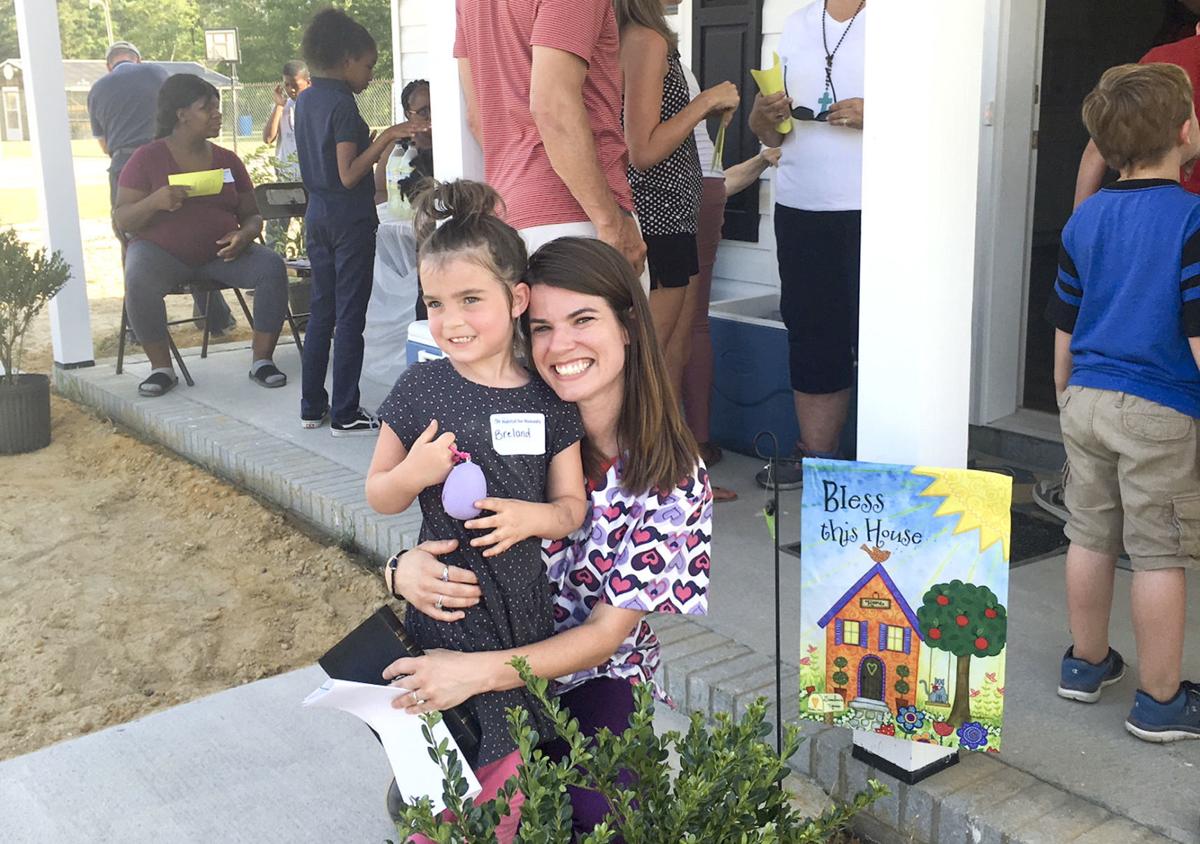 Edisto Habitat for Humanity dedicated its 85th home on Thursday. Stacy Bell is pictured in front of her new home with her daughter, Breland, following the dedication ceremony on Thursday. 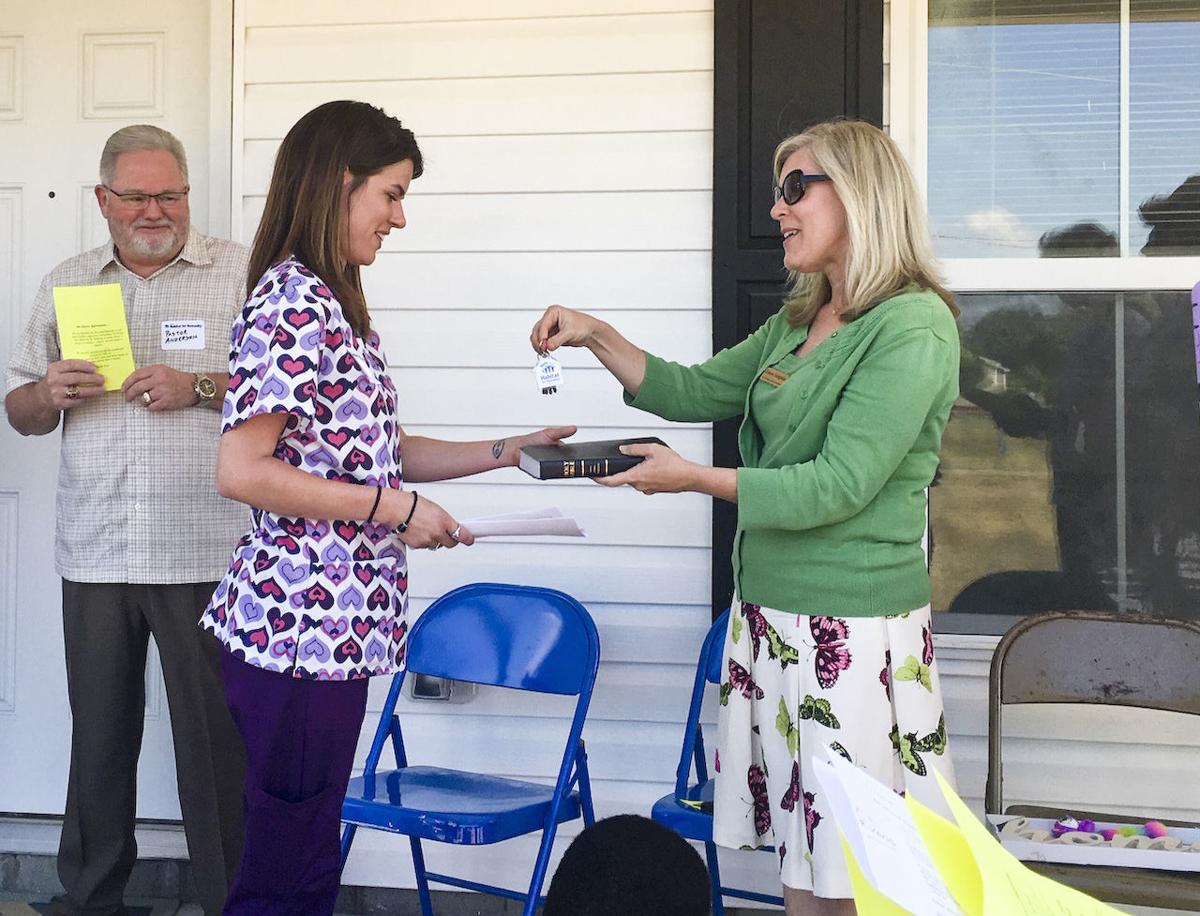 Emory Langston, community development manager at the Lower Savannah Council of Governments, right, presents Bell with a Bible and the keys to her new home.

Stacy Bell’s dream of providing a solid foundation for her two young daughters was fulfilled when she was handed the keys to a new home built by a long-serving Christian ministry.

The Cordova resident was excited and happy about her new home on Griffith Court during Thursday’s dedication. She thanked the volunteers and agency partners for their hard work.

"I’m very thankful for Habitat for Humanity and all the workers. When I started the program, I was really just signing up just to see what would happen. I could never have imagined being here at this point and time now," Bell said.

"I’m very thankful and blessed for their help in helping me achieve what I have been wanting for my children, which is a solid foundation. It’s amazing," she said.

Edisto Habitat for Humanity began its work helping provide affordable housing options in Orangeburg County in 1991. Bell's home is the 85th residence the Christian housing ministry has dedicated since its inception.

To be eligible for a Habitat home, families must meet certain criteria, including having good work and credit histories. A subcommittee chooses families based on level of need, willingness to become partners in the program and ability to repay a 25-year, no-interest mortgage.

Qualified families are also required to put in 350 hours of what is called "sweat equity" toward the building of their home, and they must participate in budgeting classes and attend home ownership classes on a monthly basis.

Bell praised the sweat equity system and the volunteers who come together to build homes.

“They are definitely some amazing individuals. I hope God blesses them tremendously. I’ve learned so much over the past couple of years even with just volunteering on other people’s homes.

"People take what they have for granted and when you’re having to work for it and put in the hours and the sweat, you really start to look at things in a whole different manner," she said.

EHFH volunteer Mile Holinko presented Bell with a lamp made from parts which were taken from her home during the building process. He and other volunteers also worked to plant flowers around the home's entrance, with landscaping to come later.

Emory Langston, community development manager at the Lower Savannah Council of Governments, presented Bell with a Bible and the keys to her new home.

"I believe that the Lord was a part of this process," Anderson said. He praised the EHFH for their willingness to give back to the community.

Bell said the support of her church, family and friends has been invaluable.

"I think their support and the support of friends and family uplifts you and keeps your spirits high when you’re doing something like this. People don’t realize the different storms that come through life when you’re trying to chase a dream. It’s all about just staying positive, and I’m very thankful,” she said.

EHFH Executive Director Jessica Burgoyne said she was also thankful for the partners that made the building of the organization's 85th home possible, including C.F. Evans and Allied Air.

"It's a lot of hard work and dedicated individuals that are committed to helping the community. It's just a good thing. The gift of home ownership really does stabilize your community," Burgoyne said.

She said the EHFH will be engaging in strategic planning during the summer.

“We hope to work with some opportunities and sit down and structure some strategic planning this summer while we're not building. That's something that I hope to achieve: to get our brains wrapped around what our plans are going to be for the next couple of years and what we hope to achieve," Burgoyne said. "Hopefully we can attract some supporters and/or grant funding to do those things."

Tom Kerr said Edisto Habitat for Humanity is dedicated to its mission. Kerr is vice president of the EHFH board and chairman of the building committee.

"We have a great group of people in what we call the middle-of-the-week crew that does the bulk of the work to keep the house moving along between our weekend builds. We enjoy putting people into new houses who have never had an opportunity like this.

"The children are just joyous at having their own room for the first time in their life. It's just great to see the smiles on their faces and work with them. I think the people that work in our group of volunteers just enjoy helping people, and this is kind of our calling for what we want to do with our volunteer efforts," Kerr said.

For more information on EHFH, how to become a donor, volunteer or homeowner, call 803-536-2300 or visit www.edistohabitatforhumanity.org.

‘There’s a role for everyone’: New Habitat director welcomes volunteers

Lakesia Haynes wiped tears of joy from her face as she gave thanks to a long-serving Christian ministry for her and her family’s new home.

A Christian housing ministry that works in partnership with people in need to build simple, decent houses was happy to help make the home owne…

Edisto Habitat for Humanity dedicated its 85th home on Thursday. Stacy Bell is pictured in front of her new home with her daughter, Breland, following the dedication ceremony on Thursday.

Emory Langston, community development manager at the Lower Savannah Council of Governments, right, presents Bell with a Bible and the keys to her new home.