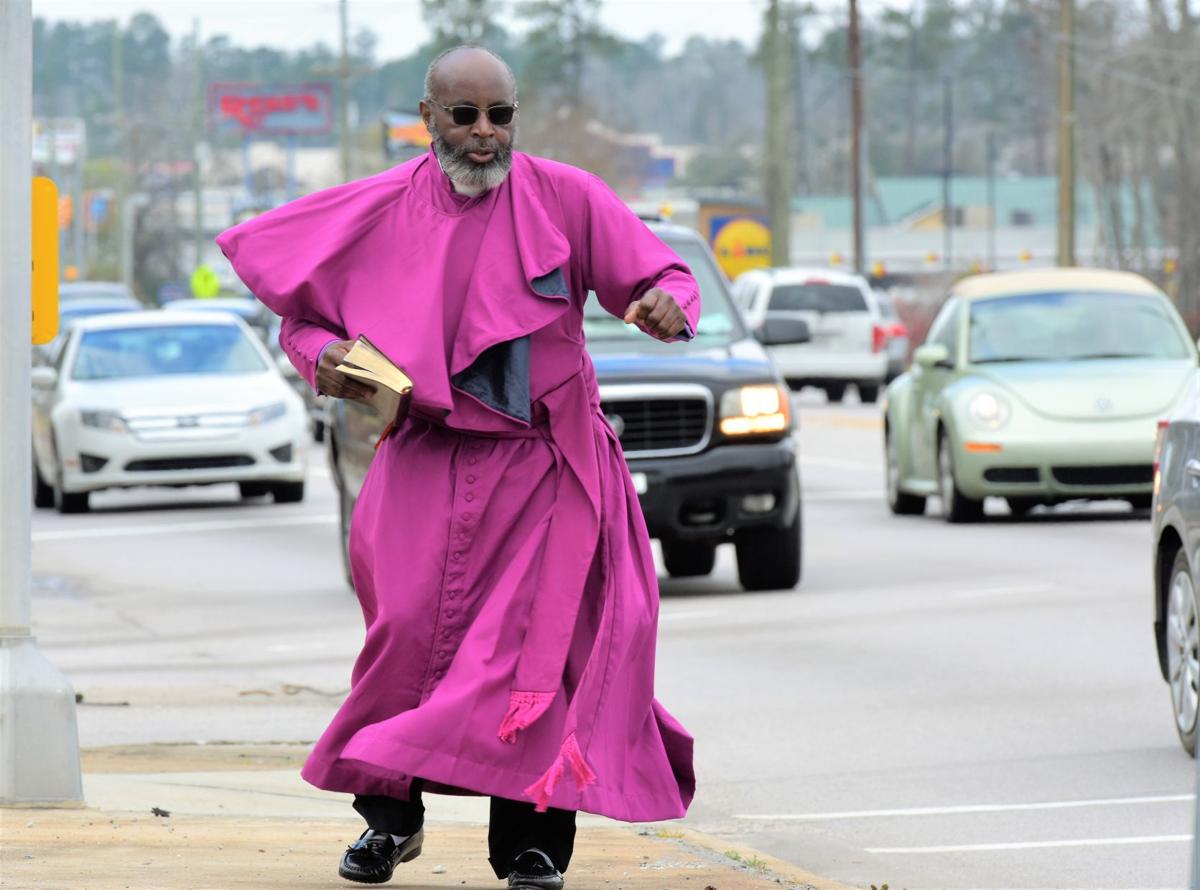 Bishop Guss Carr Jr. can often be seen on the streets of Orangeburg preaching, waving and dancing. Some call him crazy, but Carr said he's just heeding God's call to spread the word. 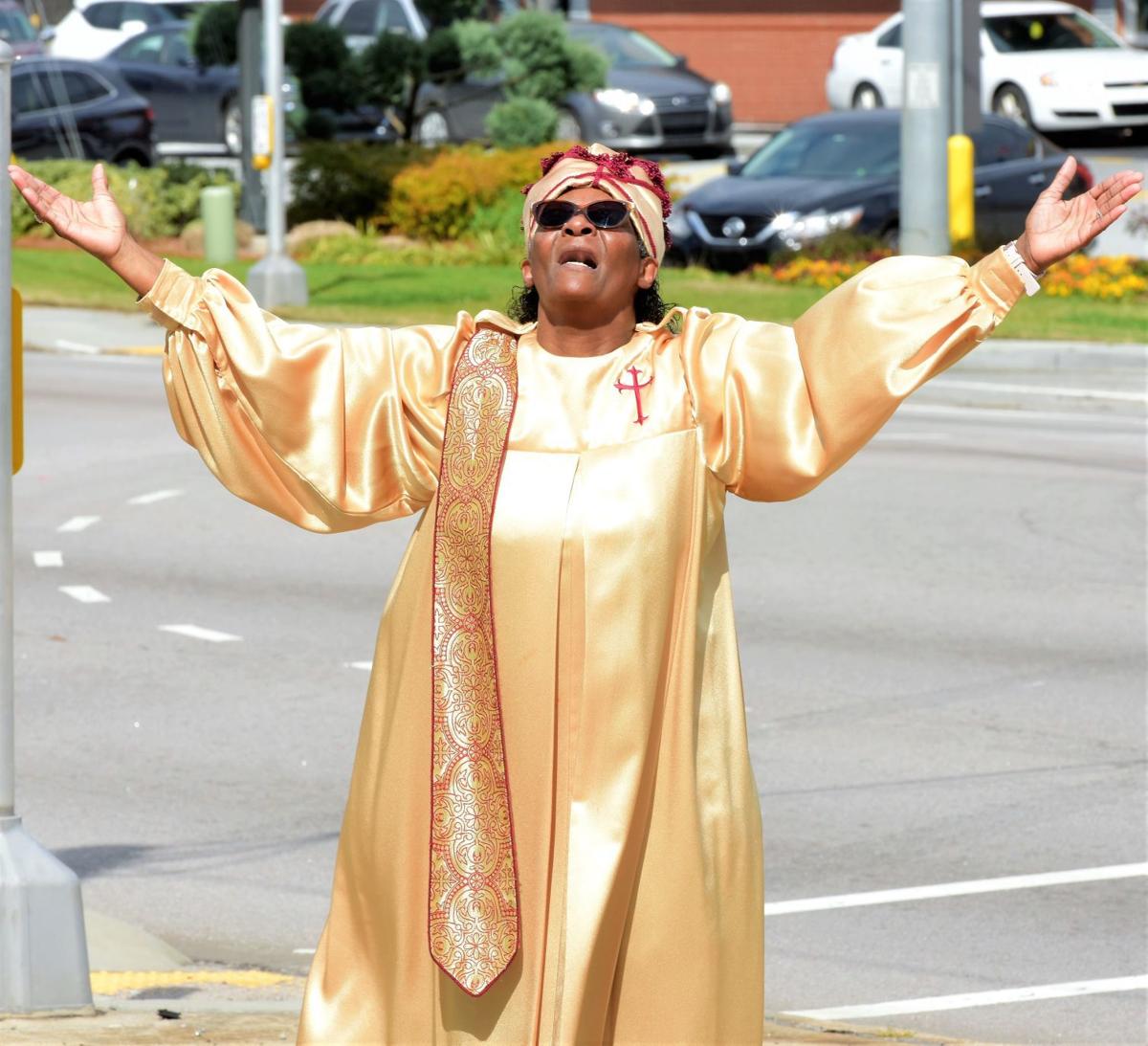 You may have seen him along the highway with his feet uplifted, Bible outstretched and long purple robe billowing in the wind, but Bishop Guss Carr Jr. is not about promoting frivolous ostentation, but rather the salvation of souls.

Carr, 67, is pastor of New Jerusalem Church of God in Christ Jesus Apostolic Inc. at 1492 Cordova Road in Orangeburg, along with Rehoboth COGIC in Holly Hill.

He is used to the waves and smiles he often gets as he preaches on the streets of Orangeburg, including along Chestnut Street in front of Prince of Orangeburg Mall and near Hardee’s on U.S. Highway 601, but he is also familiar with the ugly online attacks he receives for being called everything from crazy to sacrilegious.

“Wherever the Lord leads me, I will follow. We have a lot of waving. Some people say, ‘Continue to do what you’re doing.’ You know, you have some negative remarks. They put that on Facebook, but you’re going to have those things,” Carr said.

“If people don’t understand the word of God, they’ll think you’re crazy, but the commission of the gospel is to go out into the highways and hedges ... into all the world preaching, teaching and baptizing in the name of the Father, the Son and the Holy Ghost,” he said.

The Orangeburg native attended Dunton Memorial School, Sharperson Junior High School and Wilkinson High School. He graduated from Claflin University in 1975 with a bachelor’s of science degree in chemistry before being commissioned to the U.S. Army, where he served for five years as an active duty officer.

He also married his loving wife, Evangelist Cynthia D. Carr, in 1975, a lady with whom he shares nine children and 23 grandchildren.

Carr later gained employment at Allied Chemical in Baltimore, Maryland, a company he stayed with for 14 years as a chemist and supervisor.

Baltimore was also where Carr found his own salvation.

“I got saved in Baltimore, Maryland, at Rehoboth Church of God in Christ Jesus Apostolic at 700 Poplar Road. At the time I got saved, my pastor was Bishop William S. Barnes Sr. ... I got saved under his ministry, and after he passed away, Bishop Keith Allen became my pastor,” Carr said.

He said he and his wife, who is also a preacher, began street preaching in Baltimore.

“We started in Baltimore, Maryland, me and my wife and a lot of other young people that got saved ... We went out in the Baltimore, Maryland, area and started preaching, teaching, passing out tracts, everything. At every meeting that we’d have, someone goes out and witnesses around the area,” Carr said.

“Them that are led by the spirit of God are the sons of God. So in the fullness of God’s time, God does his work in us. So this is the fullness of time now. This is the time we have to go out and save souls,” he said.

Carr was called into the ministry a couple of years after Bishop Keith Allen became pastor of his church in Baltimore, embarking upon his own journey to bring individuals to Christ.

“I left the Baltimore area and came home and established a church. Really, my mother, Catherine, was the founder of the church, New Jerusalem Church of God in Christ Jesus on the North Road,” Carr said, referring to the church which has since relocated to the Cordova Road.

Mrs. Carr said, “I came down here in 1989. He was still in the Baltimore area. About two years later, he came down. But we’ve been preaching in this area here for like maybe four to five months,” referring to the area along U.S. Highway 601.

The couple operates a daycare, which sits off of U.S. Highway 601 and is a place where Mrs. Carr often preaches in front of too. There are also signs welcoming individuals in for drive-through prayer.

“When I’m out there, people will come and drive through ...I give them the address and tell them they can come anytime. The door is open. That’s what we’re doing," she said. "It’s impacting lives. We have the ministry of reconciliation. We have to reconcile man back to God, and that’s what we’re about."

The couple’s history of street preaching in the Orangeburg area actually goes back many years.

“We’ve been here for years. We preached on the street down by Dixon’s Shoe Shop. We were right in front of there, right on Russell Street. We got away from it for a little while because we had the church and stuff like that, but then we got back into it,” Mrs. Carr said.

“I preach right here in front of our daycare. The Lord told us we better get back out there,” she said.

Carr said he doesn’t just break out in dance or preach from the Bible for no reason.

“It's not about my life, it's about his life," he said. "Because of his life, I move, I live and I have my being. I can't do nothing without him. I'm no longer myself. I'm a vessel of his. So he uses me and as he uses me, I preach. You have to preach the gospel because I'm not ashamed of the gospel of Jesus Christ."

He said he is also not concerned about what people may think of him, and neither is his wife.

“He (Jesus) told us to go out and be fishers of men, to go bring them into his house that his house may be full. So we’re not afraid because what we’re doing is exactly what those boys that he chose did back in the day,” she said.

Carr said he has begun his street preaching as early as 7 a.m.

“Lately, the Lord is having me on my knees. I preach a while, and he’ll tell me to get on my knees and I’ll start praying ... We got to pray without ceasing,” Carr said, noting that the Holy Spirit gives him the power to preach the gospel in what others may deem the strangest of places.

“When I speak, it’s not me that speaks, it’s the Christ that’s in me speaking the wonderful works of God,” he said.

The bishop said he will never stop preaching because he realizes God’s purpose for his life.

“Regardless of what takes place in life, you can never kill the purpose of God ... I will continue. My wife will continue. I have daughters in the ministry too. They are preachers, teachers and singers,” Carr said.

“Let me put it this way, they’re greater than me. You haven’t seen nothing yet.”

A person died Tuesday afternoon in an accident in Orangeburg County, according to S.C. Highway Patrol Cpl. Sonny Collins.

Illegal narcotics estimated to be worth more than $500,000 were seized Friday, according to Orangeburg County Sheriff Leroy Ravenell.

‘We will never take these people out of our prayers’; man thankful for help provided after crash in Orangeburg County

Former Claflin University first lady Alice Carson Tisdale’s death has caused many to reflect on her life and her impact on others.

The S.C. Department of Education has approved general back-to-school reopening plans for the Orangeburg County School District and Calhoun Cou…

Bishop Guss Carr Jr. can often be seen on the streets of Orangeburg preaching, waving and dancing. Some call him crazy, but Carr said he's just heeding God's call to spread the word.