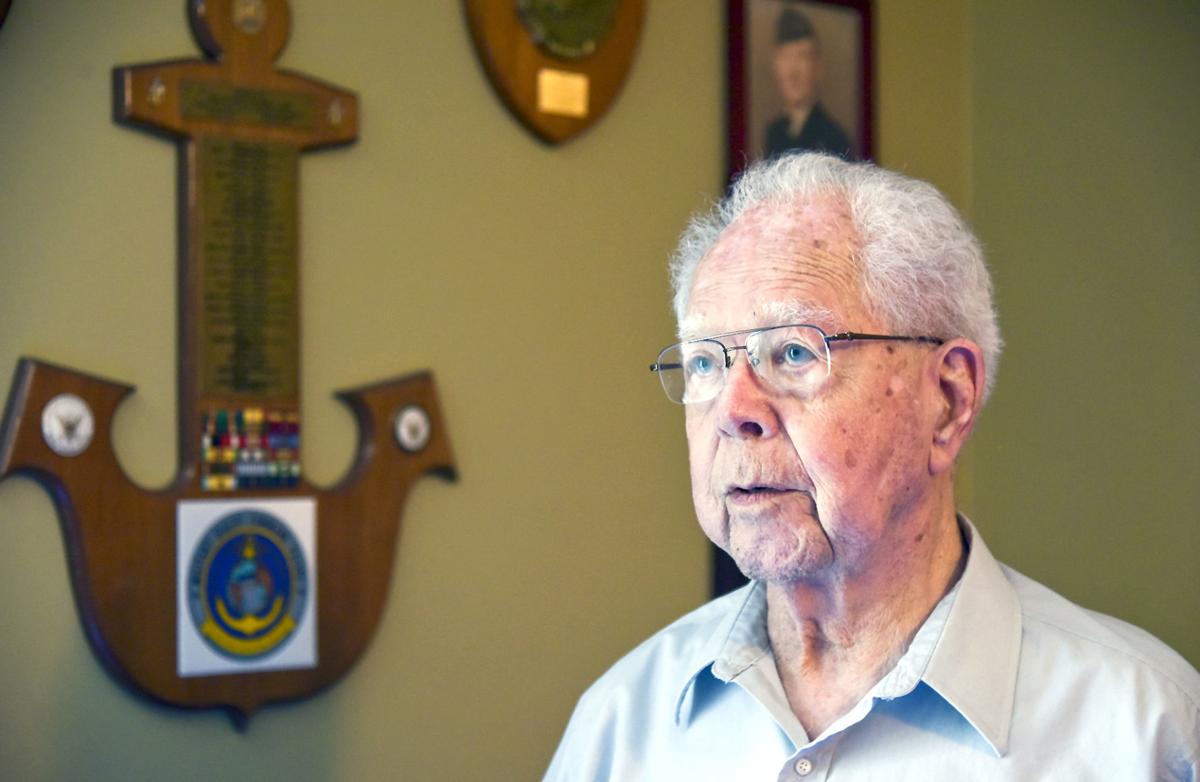 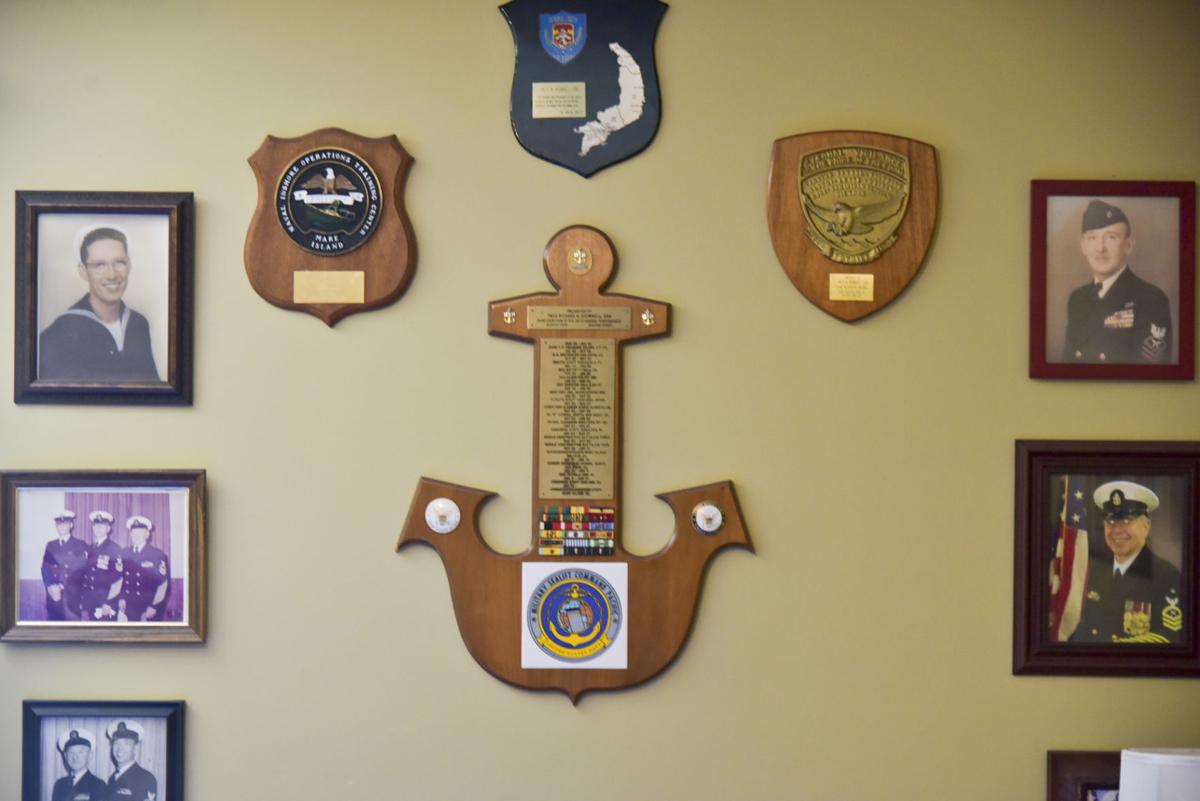 A U.S. Navy wooden anchor, pictured in the center of one of Brownell's walls, was presented to him in August 1975 from the Military Sealift Command Pacific staff. The plaque gives a chronological list of Brownell's service in his 30-year service in the U.S. Navy. 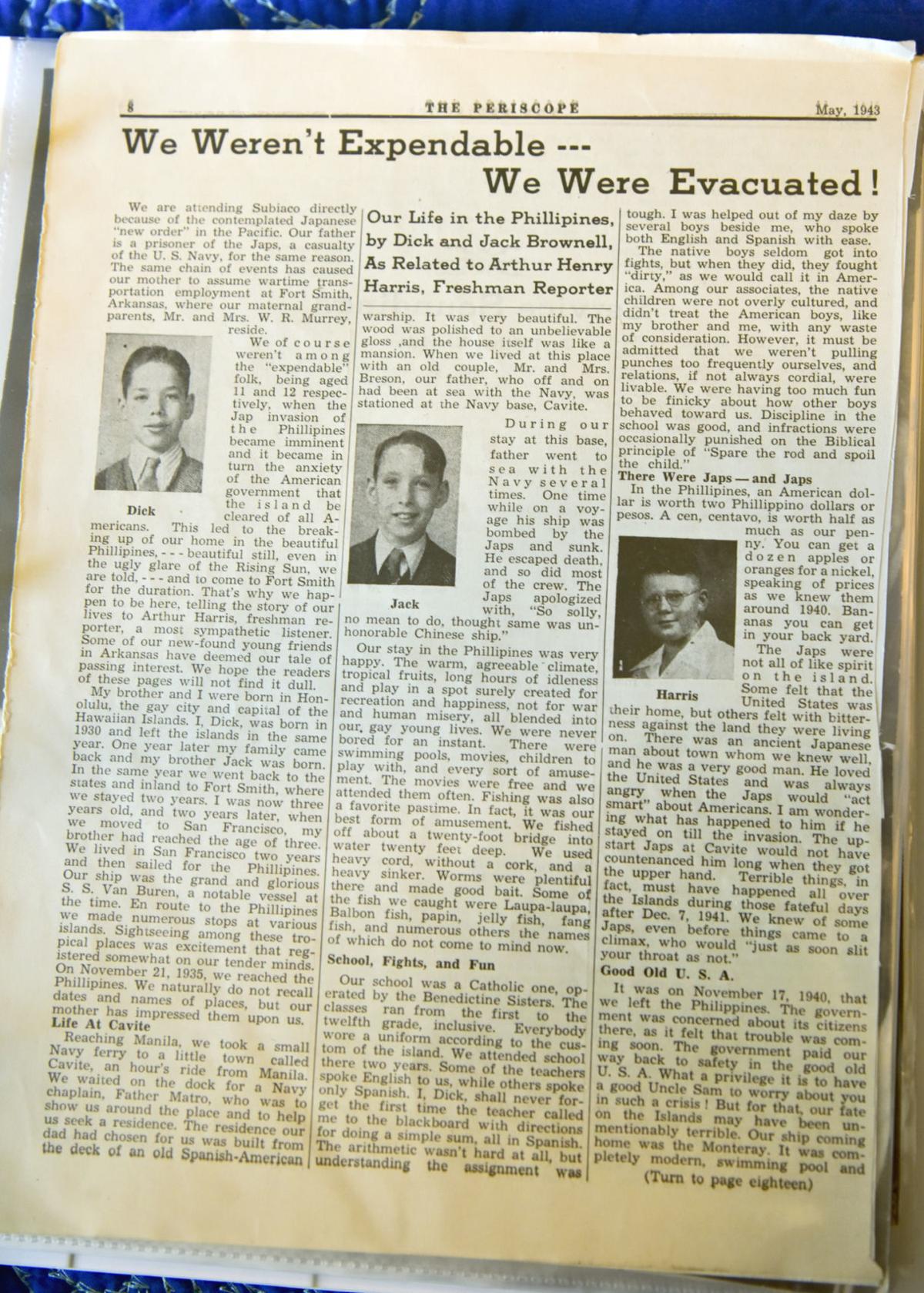 Article from 1943 about Brownell and his brother being evacuated from the Philippines prior to the start of WWII. 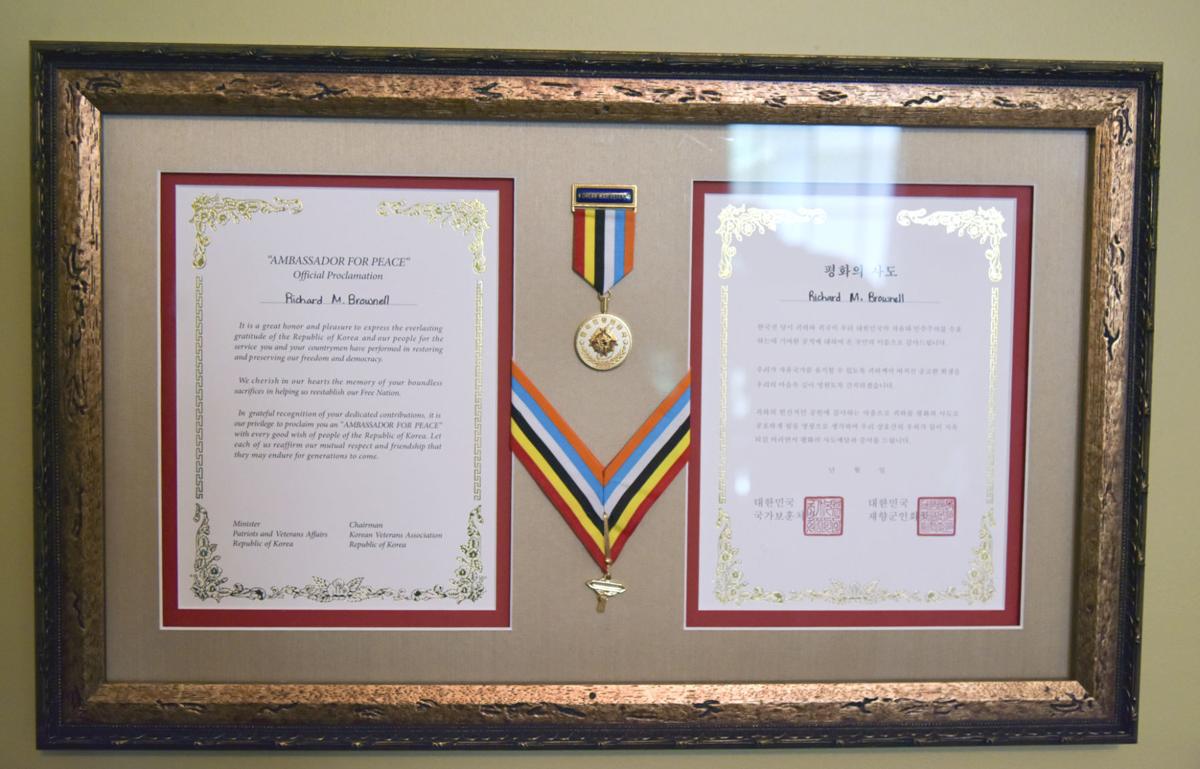 The "Ambassador for Peace" proclamation plaque hangs on the wall of Brownell's room at Magnolia Homes in Santee.

There is the "Ambassador for Peace" proclamation plaque hanging on the wall from the Republic of Korea praising Brownell's service in "restoring and preserving our freedom and democracy."

"We cherish in our hearts the memory of your boundless sacrifices in helping us reestablish our free nation," the proclamation reads.

On another wall, there is a U.S. Navy wooden anchor presented to Brownell in August 1975 from the Military Sealift Command Pacific staff. The plaque gives a chronological list of Brownell's service in his 30-year service in the U.S. Navy.

Beside his military accomplishments there are photos of his father, Theodore (a 23-year Navy veteran), of himself, and his son, Theodore II (retired as a full commander) dressed in U.S. Navy military uniforms.

"I learned a lot from him," Brownell says, referring to his father's photo. "My father told me at age 3, I can still remember the day, 'Son, there is nothing you can't do, but if you want to do it you can do it. You can do anything you want to. Make it happen.'"

This was advice Brownell, now 88, would take with him throughout his life of service and beyond.

Born in Hawaii on October 17, 1930, Brownell would find himself moving a lot as a child in a military family.

His love for water, fishing, work and duty started young.

He learned to swim off the Philippine Islands while his father was stationed there during World War II. The family had to be evacuated from the island during the war as the Japanese military began its invasion.

Brownell ended up going to Fort Smith, Arkansas, where he spent time on his grandparents' farm birthing calves and going to school at a Benedictine monastery. Later, the family would move to San Francisco.

News from the war front would reach the young Brownell.

His father, who served as a yeoman first class, was on the U.S.S. Canopus submarine serving in the Philippine islands during the war when his ship was severely damaged in Dec. 1941.

He managed to survive the attack and later joined his comrades in the ground forces in defense of Bataan and Corregidor before he was captured in May 1942 and held as a prisoner of war through the end of the war in 1945.

Back on the home front, Brownell was itching to join and to serve his country.

"I kept pushing for the Navy," he said. "Every time there was something to do with the Navy, I was right in the middle of it. That is all I had on my mind."

Brownell tried to join at the age of 16 but was told he had to wait until 17.

Little did he know that on his birthday, he would get the best gift one could ask for: His father was coming home.

He remembers going out to meet his father, who was being driven in his grandfathers's Model 8 Ford.

"We got out and hugged and cried," Brownell said. "He pushed me away and said "Happy birthday, son. That was pretty cool for me."

His father received a bronze star for his service.

Brownell enlisted in the U.S. Navy on March 28, 1948, at Santa Rosa, California, and was stationed with the U.S. Naval Reserve at Treasure Island in California.

He entered as a simple seaman but would end up working his way to becoming a yeoman and working in the U.S. Navy in administration.

Brownell was then transferred to the U.S. Naval Training Center in San Diego, California and then staff member of the Chief of Naval Air Training in Pensacola, Florida.

While in Pensacola from May 1949 through February 1950 and then later at Naval Air Station in Moffett Field in San Jose, California, through June of 1950, Brownell was assigned to fire rescue.

The onset of the Korean War brought a restructuring of the Navy's disposition of air forces, resulting in several squadrons being transferred to the Moffett Field where the field served as a fighter base.

Brownell was responsible for serving as a first rescue for any air accidents that would occur during training as well as plane maintenance. One incident he recalls is when his assistance was needed when a dirigible caught on fire.

"The only good part about that was that my dad was in there" Brownell said.

It was at Moffett Field where Brownell had an opportunity of a lifetime: he got to shake hands with U.S. Navy Fleet Admiral Chester W. Nimitz on Oct. 18, 1948, a day after his 18th birthday.

"When I shook his hand, I just trembled," Brownell said. "My dad was right there with me."

"I finally got the point where I said I wanted to go to sea," he said. That was what I was here for."

Brownell got his first ship, the USS Gloucester (PF 22). There, while the ship lay idle in the Pacific Reserve Fleet at Yokosuka, Japan, before being recommissioned for the Korean War, was where Brownell helped to service and repair ships.

On his first day on the ship, he was instructed by his superiors to repair a diesel engine which crew members had been working on for six months unsuccessfully.

"I repaired that motor in one hour and 42 minutes," he said, noting he simply used a repair manual to "get the job done."

"I had never worked on one my whole life."

Brownell would end up seeing his first taste of war upon the USS Gunston Hall (LSD-5).

In September 1950, the ship sailed from Japan to participate in the amphibious operation at Inchon, Korea.

Gunston Hall would end up making several shuttle trips from Japan to Korea to bring reinforcements such as troops and supplies to the United States Marines First Marine Division Reinforced.

"My boat got stuck in the sand," Brownell recalled "I fought seven days with the Marines until we got to Seoul. We fought with them all the way."

It was also the first time Brownell killed a man.

"It was scary at first, but then life is such," he said. "I still once in awhile see that guy's face that I shot."

"He was on this side of the bush and I was on this side, and I didn't hear him coming up, but all of a sudden I heard something and looked over," Brownell recalled. "He had a rifle and was getting ready to raise on the two guys in front of me."

"I took the .45 and I fired right there," Brownell said, pointing between the eyes. "I was ready to quit. I have shot more, but I didn't see them close enough. That was combat. Everything I did, I always said my dad was there."

When he arrived in Seoul, Brownell said the colonel with the Marines would bring the comrades back to their ship. His comrades with the Navy thought he was killed and were going to declare him as missing in action.

Following the Korean War, Brownell joined the Naval Beach Group One unit and then the staff of the United States Fleet Activities in Yokosuka, Japan. The base served as a significant naval ship repair facility in the area.

It was in Japan that Brownell met his now late wife, Ayako Tsunoi. Photos of she and him don the walls of the his room.

"I asked her for a date and she said, "I don't date, but I dance," Brownell said, with fondness in his voice. "So I learned how to dance."

The couple was married for 56 years and had three children. She became a U.S. citizen in October 1960 as Brownell proudly shows a letter of citizenship signed by then-President John F. Kennedy.

After Japan, Brownell was transferred to the Patrol Squadron 19 from August 1962 to August 1965. During his time there, Brownell helped to establish classes in administrative and personnel procedure for the squadron.

While with the NMCB 3, Brownell went to Vietnam to Chu Lai and Gia Le where the battalion helped to construct more than 500 facilities for the Marine Corps.

With Battalion Four, Brownell worked on a number of camp construction projects for the Navy and Marines including an airstrip.

"When you work with the Seabees there is always work to be done," he said. "I enjoyed the dickens out of it."

Following other assignments where he served as a training officer, Brownell embarked on his last ship -- the USS Tutuila (ARG-4) -- in August 1971. The ship would leave China and was soon decommissioned.

Brownell retired from the U.S. Navy in July 1978 but remained with the U.S. Navy for another decade as the housing manager for the Housing Department of the Navy Public Works Center in San Francisco Bay.

There he received a Meritorious Unit Commendation by helping the U.S. Navy save millions of dollars through his management and leadership of the Public Works Center following a $70 million expansion ordered by the U.S. Department of Defense, subsequently followed by financial losses from base closures.

"I stayed around and I did a good job, at least I thought I did," he said.

Brownell says he thinks about his service often.

"The good points, there are bad points but there were good points," he said. "What I always did was I always laughed at the challenge."

"I have nothing but the greatest pride in my service,' he continued. "Don't ever say you can't do it. My dad told me the same thing. He was so proud of what I did."

"I have nothing but the greatest pride in my service,' he continued. "Don't ever say you can't do it. My dad told me the same thing. He was so proud of what I did." -- Murrey Brownell

More in STORIES OF HONOR: allegiance, heroism and determination (10 of 18)

The war years in Vietnam came and went in a flash and a fury for those of us born around 1946. The threatening days prior melted into the sudd…

Flying since the mid-1970s as a private pilot, Jim Tobul of Bamberg began in earnest doing his part to keep the military service of warbirds, …

A U.S. Navy wooden anchor, pictured in the center of one of Brownell's walls, was presented to him in August 1975 from the Military Sealift Command Pacific staff. The plaque gives a chronological list of Brownell's service in his 30-year service in the U.S. Navy.

Article from 1943 about Brownell and his brother being evacuated from the Philippines prior to the start of WWII.

The "Ambassador for Peace" proclamation plaque hangs on the wall of Brownell's room at Magnolia Homes in Santee.