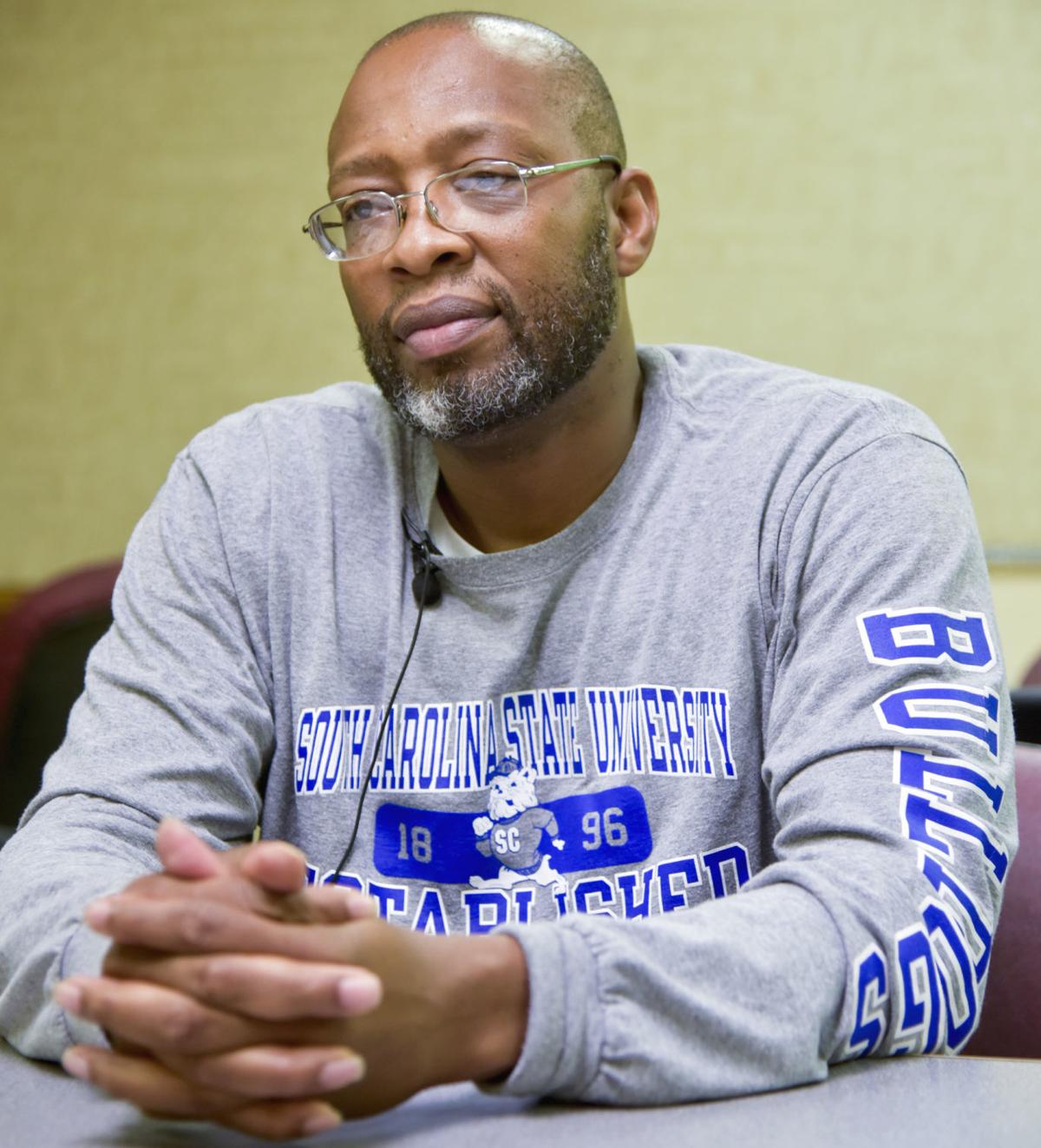 Kurtis Yarbrough, 48, spent 12 years in the U.S. Marine Corps. He is now a sixth-grade social studies teacher at William J. Clark Middle School and serves as a basketball coach at Orangeburg-Wilkinson High School. 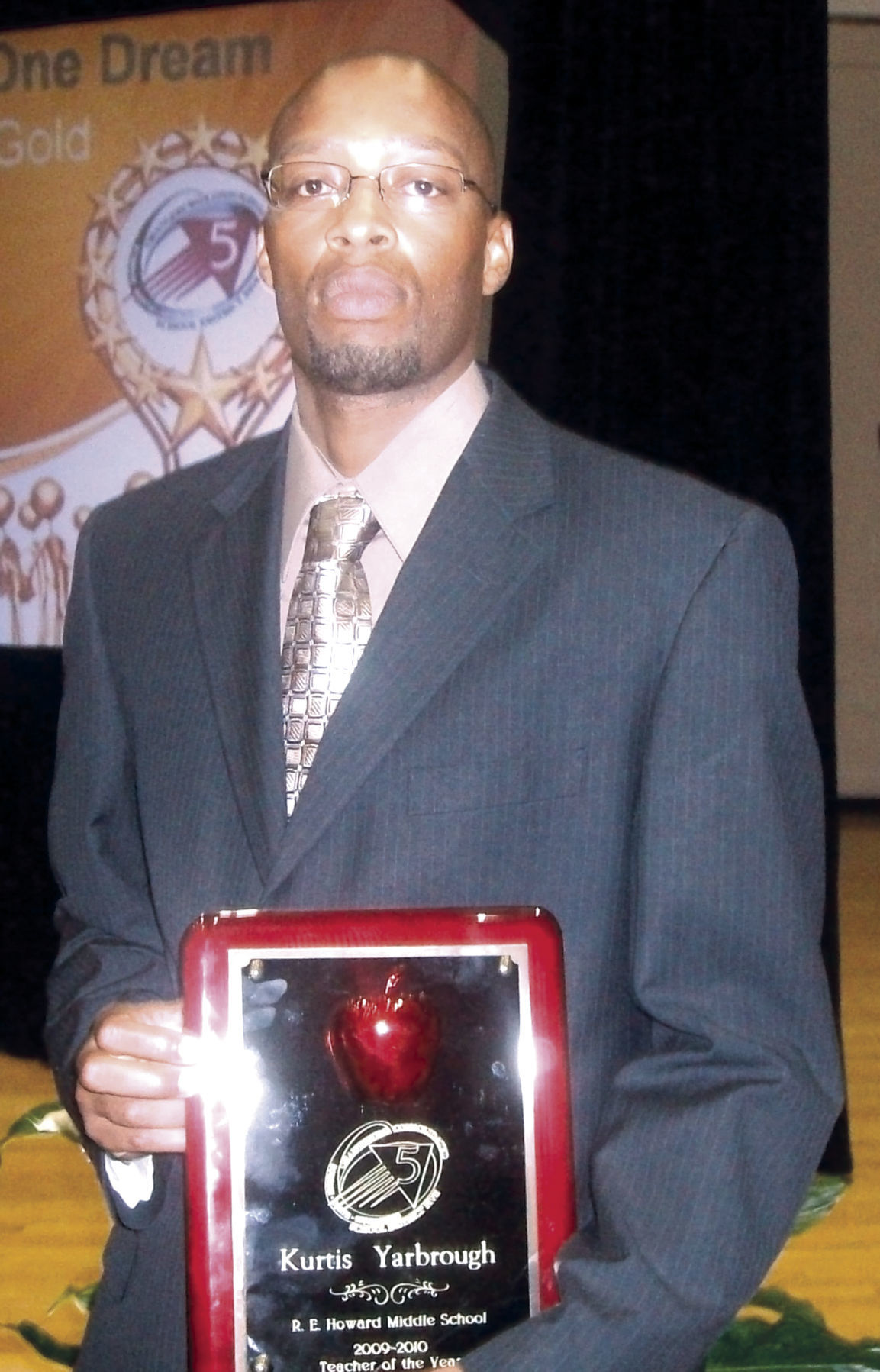 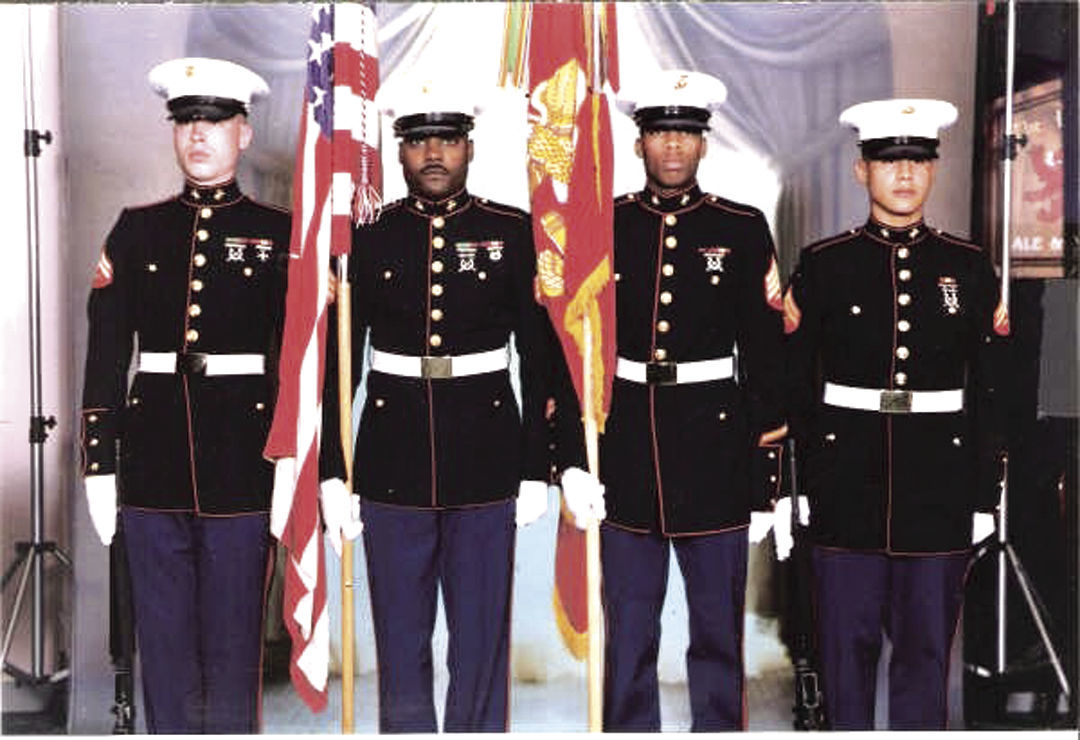 Marine veteran Kurtis Yarbrough is pictured third from left as part of a Marine Color Guard. Yarbrough, who served in the Marines from 1990 to 2011, was stationed in Okinawa Japan at the time.

Kurtis Yarbrough grew up in the tough streets of Bronx, New York, and never imagined a future that would land him in the military and education fields, both of which would help him mold not just his character, but those of other young men and women.

The 48-year-old was a self-described juvenile delinquent who often skipped school and was doing everything he thought he was big and bad enough while hanging among a rough crowd.

It was not until his mother moved with him and his brothers to Sumter in 1987 that he began to transform his life. While he was years behind other seniors at his high school, he managed to excel academically and graduate. A 12-year career in the U.S. Marine Corps soon followed, but that wasn't the end of his story.

"As an adolescent, I was not one of your model kids. I was the kid that everybody was told to stay away from. I began cutting school in the sixth or seventh grade. ... Everything to be done I did it, from the fighting and everything. Nobody couldn't tell me anything, and I was heading down the wrong path fast," Yarbrough said.

He said his mother's decision to relocate is what saved his life because years later he found that most of the crowd that he hung with were either serving long prison sentences or dead.

STORIES OF HONOR: WWII vet worked on beach after D-Day

He knew he had to do something after his high school graduation, but realized at the time that college life was not for him even after earning a scholarship to Auburn University in Alabama.

"If I was to go to any college anywhere I was going to be wasting somebody's time," said Yarbrough, who had family members, including his older brother, in the Marines.

"So it's kind of something that was in the back of your head saying like, 'You can always go in the Marines.' It was out of really me knowing that my options were real few. I wasn't going back to New York. ... I knew I couldn't go back to that, and I knew I couldn't go to college and waste my mother's money because I think that was at the stage where my mother probably would have killed me," he said.

He instead entered the Marine Corps in 1990. After graduating from recruit training at Parris Island, Yarbrough went to Meridian, Mississippi, where he received training in aviation operations at his Military Occupational School.

He was grateful to have not seen combat in Operation Desert Storm, which was part of the Gulf War waged by coalition forces from 35 nations led by the U.S. against Iraq in response to Iraq's invasion and annexation of Kuwait.

"By the time I went to boot camp, which is the day after Desert Storm actually kicked in, and I finished my school, they were basically done in the desert. ... I didn't go to Iraq. So that part I kind of dodged," said Yarbrough, who actually ended his military career just one day before the Sept. 11 attacks in 2001, when the Islamic terrorist group al-Qaeda launched a series of four coordinated terrorist attacks against the United States.

"My career was actually anchored by Desert Storm and 9/11. I was never in really major conflict. There were conflicts at the time, but I wasn't like pushed into the conflict. The job that I had would not put me directly in combat.

"I had to be where the planes could take off and land safely. So I was in the rear. It was kind of important to me when I was deciding to go in the Marines. I didn't feel like I'm one of those guys who needed to be out there on that front line with bullets flying by me. I lived that growing up, and it wasn't what I liked then," Yarbrough said.

During his military career, Yarbrough was first stationed at Cherry Point, North Carolina, where he was working in the headquarters squadron for three years.

"I was actually in the headquarters squadron, which didn't do a whole lot of deployments. But, of course, when other squadrons were deploying, they would take some of us every now and then. ... Throughout that time, we had various temporary active duty locations," including trips to Norway and Puerto Rico, he said.

He recalled cold weather training in Wisconsin as being the worst experience of his military career.

"It was just freezing cold ... and you had to stay out in the elements for three days, freezing out there in the snow. It was worse than boot camp and it was only three days," said Yarbrough, who also recalled freezing during his deployment to Norway, an expedition that earned him an Arctic Service Ribbon.

"People always talking about, 'Well, you're from New York.' No, that's a different kind of cold. In New York, we go in the house. We were building igloos where it's 15 degrees below zero. You build an igloo and get it all the way up to 10 degrees, and you're grateful for that 10 degrees," Yarbrough said.

He was stationed at Okinawa Japan for a year after leaving North Carolina.

"I was there during the time when the terrible event happened, where we had the four American service members who raped a little girl. The Japanese people were actually picketing in front of the general's building, telling us to get out of their country.

"So that was a trying time there because the general's building was on one base, and we lived on another base. So we had to actually drive through the gate through picketing and everything. It was definitely an unfortunate circumstance," Yarbrough said.

He was stationed at Camp Pendleton, California, for approximately three years after leaving Okinawa.

"I was working operations of the training office there. A lot of the time that I spent in the Marine Corps was working in training, where I was basically responsible for administering physical fitness tests ... and basically keeping records on the training side of things within our unit," Yarbrough said.

He enjoyed his work.

His last duty station was as a Marine recruiter in Orangeburg from 1998 to 2001.

"That was the most challenging and joyful duty station I had. ... I had an opportunity to meet and talk to a lot of young men and young ladies who had a strong desire to enter the Marine Corps but were not able. They could not academically pass the test required. The great part was the young men and ladies that I did put in and had an opportunity to change their life and their situations," he said, but the others who did not meet all the necessary requirements for entering the Marine Corps still weighed on his conscience.

He is now a sixth-grade social studies teacher at William J. Clark Middle School and serves as a basketball coach at Orangeburg-Wilkinson High School. He was designated as Orangeburg Consolidated School District 5's Teacher of the Year in 2010 while serving as a sixth-grade social studies teacher at Howard Middle School. He's also the director of the Orangeburg Xpress Youth Basketball Grassroots Sports Organization.

He recalls the troubled youth he once was and marvels at the transformation.

"That's why with everything that I'm doing, I try to make sure I provide a great opportunity for these young guys coming up and do that with the basketball, or in the classroom.

He said the Marine Corps taught him many lessons, even after enduring grueling swim qualifications and walking for miles with the weight of 30- to 40-pound packs on his back.

While he now suffers from a little back pain, he said it was all worth it. What did he learn?

"Being responsible ... and having discipline and a lot of those small, intangible traits that would led to the tangible. I learned pride of belonging and being part of a great organization. And within that pride, you realize you must do the things that are necessary to keep this name up.

"So I wouldn't want to do anything to make people say, 'Oh, this is what Marines do,' or, 'You still that kid from the street with a uniform on.' That pride kind of kept me on the straight and narrow to do things right," Yarbrough said.

He said he would gladly serve his country again.

"Now, I did have those days or two where I'm laying on my pillow with tears running from my eyes ... and filling up my ears and I'm like, 'What in the world are you doing? Why did you do this?'... But over 12 years, there were only 30 days that I did not like. I would definitely do it again with ease," he said.

Besides his Arctic Service Ribbon, Yarbrough said he also earned the Navy Achievement Medal and a Good Conduct Ribbon with "about three or four stars."

He is married to his high school sweetheart, Tonya, and is the father of four children, the eldest of which just graduated from high school.

"My first born. Those are the days that you wait for. I've pretty much had all my highlights," he said.

OCSD5 Teacher and Marine Corps Veteran Kurtis Yarbrough relates his service to our country to his service in the classroom.

On June 1 a long-overdue memorial service was held for Confederate Private Henry Mitchum, who was a Native American from Ehrhardt.

STORIES OF HONOR: 'I was doing my job' -- WWII vet proud of serving -- and surviving

Charles Leonard Shuler Sr. survived being thrown from the back of a truck and the hail of machine gun fire as part of his combat experience in…

Stacey Sowell has been named the new director of admissions and recruitment at South Carolina State University.

Kurtis Yarbrough, 48, spent 12 years in the U.S. Marine Corps. He is now a sixth-grade social studies teacher at William J. Clark Middle School and serves as a basketball coach at Orangeburg-Wilkinson High School.

Marine veteran Kurtis Yarbrough is pictured third from left as part of a Marine Color Guard. Yarbrough, who served in the Marines from 1990 to 2011, was stationed in Okinawa Japan at the time.