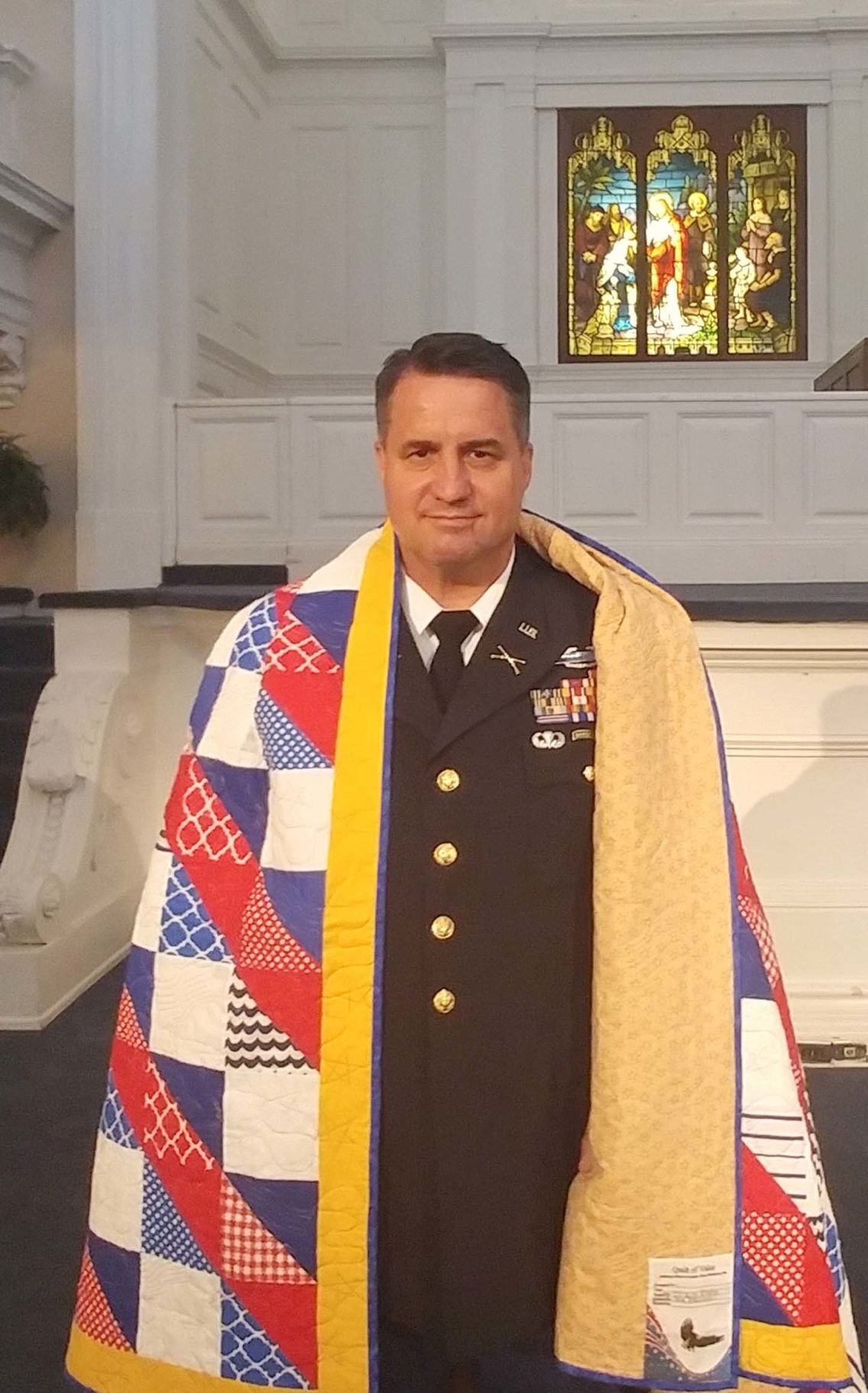 Col. Bill Connor of Orangeburg was presented a Quilt of Valor on June 19, 2019, at First Baptist Church in Columbia. 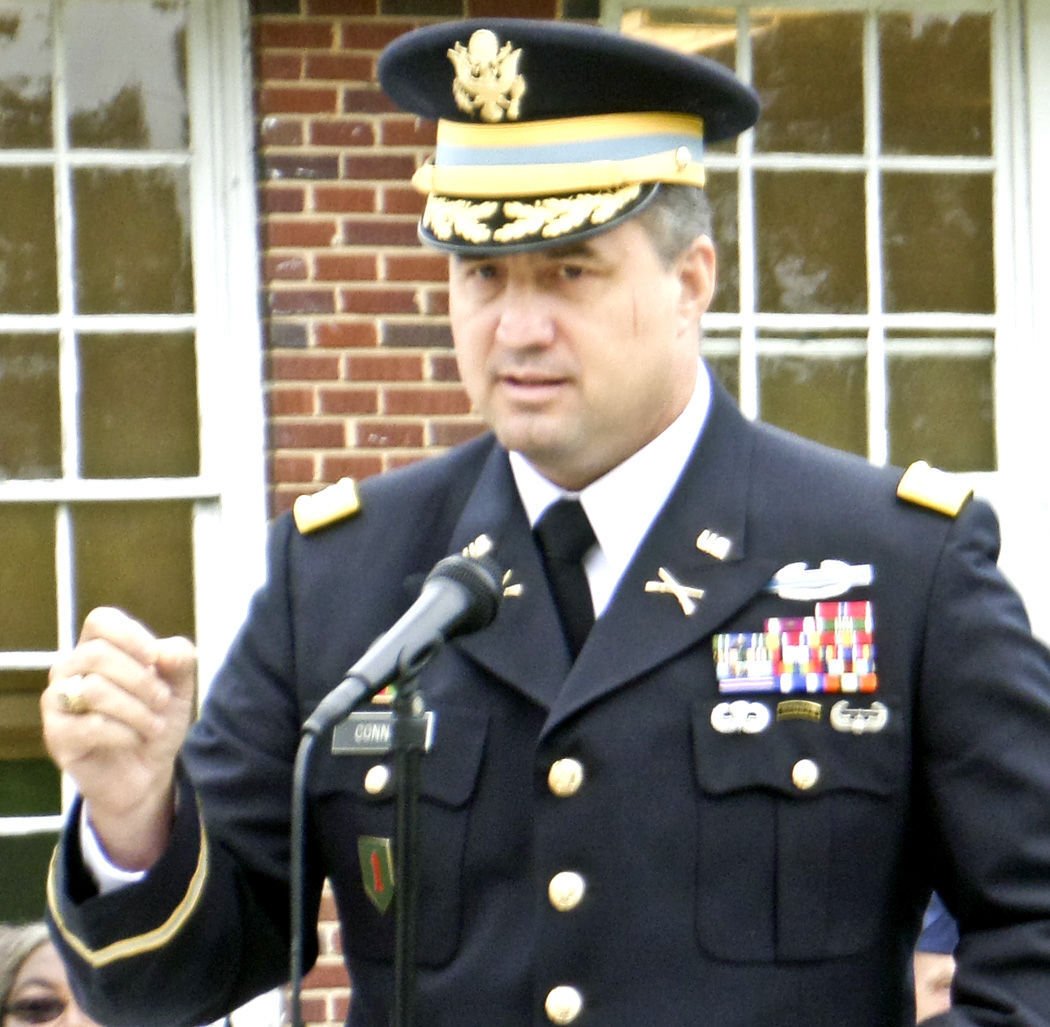 "I was almost killed in a mortar attack in which a mortar landed feet from me. Though I was knocked back hard and ringing in my ears for days, none of the shrapnel went into me. One time I walked into a compound of an enemy village and a fighter sprayed rounds with his AK-47 but thankfully missed us, but that was miraculous for us.” 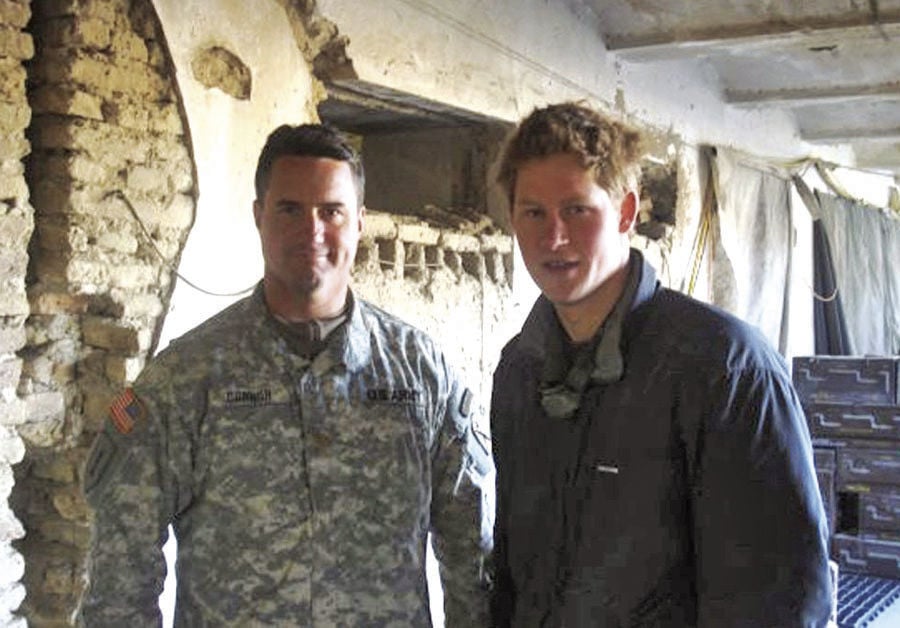 Col. Bill Connor of Orangeburg, left, with Prince Harry in Helmand Province, Afghanistan, during the Christmas season in 2007.

From the youngest age, retired U.S. Army Col. Bill Connor knew he wanted to serve in the military.

“I saw the military as a challenging, exciting and honorable line of work," Connor said.

Connor's great-grandfather and grandfather were career U.S. Army officers and his father served two tours of duty in Vietnam.

"I grew up as a ‘military brat.' moving every two to three years during my father’s military career," said Connor, who was born at Tripler Army Hospital in Hawaii in 1968.

Connor looked to his father and grandfather as models of service, but he says a book he read at at the age of 14 was the clincher.

The book, called “Marine: The Life of Chesty Puller,” 'had an exceptional influence on my motivation to become an infantry officer', said Connor.

Connor graduated high school in SHAPE Belgium, where his father was stationed from 1981-1986.

At the age of 18, Connor became a cadet in the ROTC at The Citadel and went on to Airborne School at 19.

He was commissioned an infantry lieutenant in the U.S Army at the age of 22.

Connor's first assignment was Fort Benning, Georgia, for infantry training and Ranger school, and then Fort Stewart, Georgia, where he joined the 24th Infantry Division.

Two Middle East deployments would soon be his calling.

At his first station, Connor served as an infantry platoon leader commanding 35 men and then Headquarters and Headquarters Company (HHC) Executive Officer as second in command of 350 men.

It was a role he served for three years.

Following this time period, Connor went to the infantry officers advanced course before joining the 25th Infantry Division in Schofield Barracks in Hawaii.

He was there for about three years, with seven months of that time having been deployed to the Middle East “Multi-National Forces and Observers” mission.”

There he served as a battalion logistics officer and then infantry rifle company commander, commanding around 140 men.

Connor later became a Ranger company commander in the Ranger Tng Brigade at Fort Benning and held other infantry officer duties there for about four years.

Throughout the 1990s, Connor was deployed in the Middle East for show of force missions in Kuwait and peacekeeping between Israel and Egypt in Sinai.

He was later mobilized for 15 months for combat service in Afghanistan as an infantry major and lieutenant colonel. He also had shorter deployments to Korea and Crete.

"One deployment to Kuwait in 1994 involved a show of force mission to cause Saddam Hussein not to attack Kuwait ... knowing that we would likely be overrun and killed if he attacked," Connor said. "He pulled back."

"My combat deployment to Afghanistan was exciting and rewarding, despite the hardships and dangers involved," he said.

Connor was involved in frequent battle.

"Multiple times in Afghanistan, I was involved in direct fire firefights and multiple times in indirect missile, mortar, attacks," he said. "One time, in particular, I was senior officer with a group that was ambushed by a much larger Taliban force."

"This involved much close-in fighting with fighters we could see and shoot over around 7 kilometers while we were in vehicles," he continued. "It was a situation that turned out well in not losing anyone killed (some wounded) and no vehicles destroyed, while taking out a number of Taliban fighters."

"Another time, I was almost killed in a mortar attack in which a mortar landed feet from me," Connor said. "Though I was knocked back hard and ringing in my ears for days, none of the shrapnel went into me. One time I walked into a compound of an enemy village and a fighter “sprayed” rounds with his AK-47 but thankfully missed us, but that was miraculous for us.”

Connor said he does not know if he ever mortally wounded anyone.

“When I asked my father if he killed anyone in his two tours, he told me he honestly wasn’t sure, though he had fired at enemy," Connor said. "I now understand, as I have the same answer."

"I fired at those shooting at me, but I cannot be 100% sure I killed any of them even after the firing ceased," he said. "I was in some situations in which I saw men under my command affirmatively kill an enemy fighter  --we walked up and inspected the remains afterwards."

"As an officer, I felt my primary duty was in coordinating fires and leading, over focusing on using my own weapon," Connor said.

Connor said there were a few things that helped him get through his time overseas.

“Faith in God was the ultimate reason and strength, as my faith grew, knowing death was close, particularly in Afghanistan," he said. “Letters and communications from and to home were critical, as well as staying in touch with Orangeburg and updates about my three children. Faith in God was most important.”

“It was wonderful seeing my wife of now 30 years, and three young children, and loved seeing Orangeburg and being back home in the U.S.," Connor said.

Connor left Afghanistan about 10 years ago as a lieutenant colonel. He was elevated to a colonel in 2015 and retired as a colonel in December 2020.

In addition to his service in the U.S. Army, Connor spent five years in the South Carolina National Guard, including deployment to Afghanistan. He served as senior instructor in South Carolina for the Command and General Staff Officers Course.

His last assignment with the SCNG was as a colonel senior federal officer under Army North, coordinating federal military support for state emergencies like hurricanes and COVID response.

Connor said most have been appreciative of his service.

“People have been great about treatment of those who fought in Iraq/Afghanistan, unlike what my father experienced coming back from Vietnam," Connor said. "I am proud of what we did and believe it made me a better man, and I am not guilty about our service and proud of what we accomplished."

Connor admits he misses the service and that his only regret is "having to leave."

"I am very proud of my service and wouldn’t do anything differently," he said.

Today, Connor practices general law in Orangeburg and is also involved in a number of veteran organizations including the American Legion, Association of the United States Army and Veterans of Foreign Wars.

Connor says he strives to be a Christian witness in the legal profession and enjoys Bible reading and morning prayer with his legal staff.

Futuristic pasta is made flat, shapes itself while it boils

Futuristic pasta is made flat, shapes itself while it boils

Stories of Honor 2021: We want to tell your story

The T&D Stories of Honor program is in its third year. Help us honor these local heroes who have served or are currently serving at home a…

Col. Bill Connor of Orangeburg was presented a Quilt of Valor on June 19, 2019, at First Baptist Church in Columbia.

"I was almost killed in a mortar attack in which a mortar landed feet from me. Though I was knocked back hard and ringing in my ears for days, none of the shrapnel went into me. One time I walked into a compound of an enemy village and a fighter sprayed rounds with his AK-47 but thankfully missed us, but that was miraculous for us.”

Col. Bill Connor of Orangeburg, left, with Prince Harry in Helmand Province, Afghanistan, during the Christmas season in 2007.