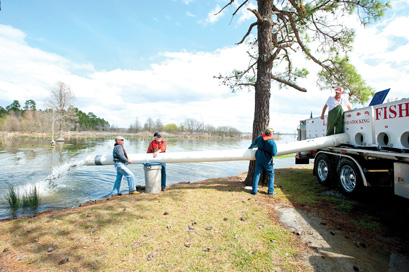 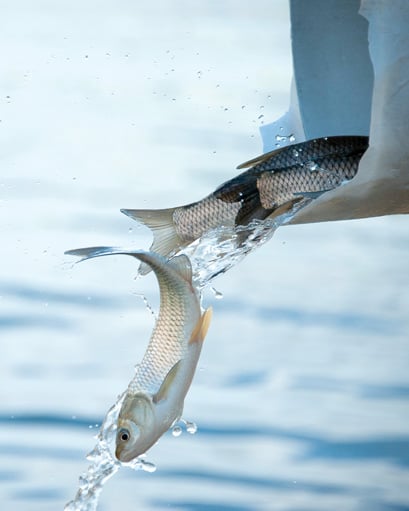 Sterile grass carp were first introduced into lakes Marion and Moultrie in 1989. The fish brought the non-native aquatic weed hydrilla under control by 1996. Carp are being restocked in the lakes with the presence of the weed growing again.

MONCKS CORNER — This spring, Santee Cooper is stocking lakes Marion and Moultrie with 109,000 sterile grass carp in a renewed strike against hydrilla.

Hydrilla is a non-native aquatic weed that is invasive and, if left uncontrolled, can cause significant problems on the lakes. The grass carp, which eat hydrilla, are the most effective and least intrusive means to control the weed.

This is the first significant grass carp stocking in the lakes in several years. Santee Cooper introduced grass carp to the lakes in 1989, stocking 100,000 fish a year through 1992 and approximately 50,000 annually over the next several years. The grass carp brought hydrilla under control by 1996. As the numbers of originally stocked fish decreased due to natural mortality, the utility initiated “maintenance stocking” in 2007 to maintain control of the hydrilla.

The presence of hydrilla on the lakes is growing again, however, with a 300 percent increase in the weed from 2010 to 2011.

“Santee Cooper plans to introduce approximately 109,000 grass carp this year,” said Larry McCord, supervisor of analytical and biological services. “We believe that using these fish in the lakes will help alleviate an emerging problem we see with hydrilla that if left unchecked, will choke out the native aquatic plants and lead to even more serious issues like fish kills and degraded water quality.”

On March 6, workers added 16,000 grass carp into Lake Moultrie at the Pinopolis West Dike, the first of several stockings. A day later, another 10,000 fish were placed in Lake Moultrie at Angel’s Landing, a popular campground and marina. Since then, 5,000 fish have been placed at Spier’s Landing with another 5,000 placed at Rock’s Pond Campground, both Lake Marion locations.

Hydrilla was first discovered in western Lake Marion in 1982. By the mid-1990s, the weed had made its way into Lake Moultrie and infested approximately 45,000 acres of the 156,000 acres of surface water that comprise both reservoirs. In essence, the usable areas of both lakes shrank dramatically.

During this time, hydrilla clogged areas where marinas and fish camps depend on clear access to launch boats, hurting the businesses and the boats. It threatened water quality, natural habitats and even Santee Cooper’s ability to use its hydroelectric generating facilities on the lakes.

“It’s important to note that these grass carp are sterile, which eliminates introducing another non-native species that could grow unchecked and threaten the balance of the lakes’ ecosystem,” McCord said.

Hydrilla isn’t the only threat on the lakes. The crested floating heart, another non-native plant discovered growing in the Eutaw Creek area of Lake Marion in 2005, is a newcomer among invasive aquatic weeds on the lakes. This plant is now found from the Rimini area of Lake Marion to near Moncks Corner in Lake Moultrie and spreads very aggressively.

For information or to report outbreaks of either of these plants, contact Santee Cooper’s Department of Analytical and Biological Services at 843-761-4101 or 843-761-4078.

Sterile grass carp were first introduced into lakes Marion and Moultrie in 1989. The fish brought the non-native aquatic weed hydrilla under control by 1996. Carp are being restocked in the lakes with the presence of the weed growing again.