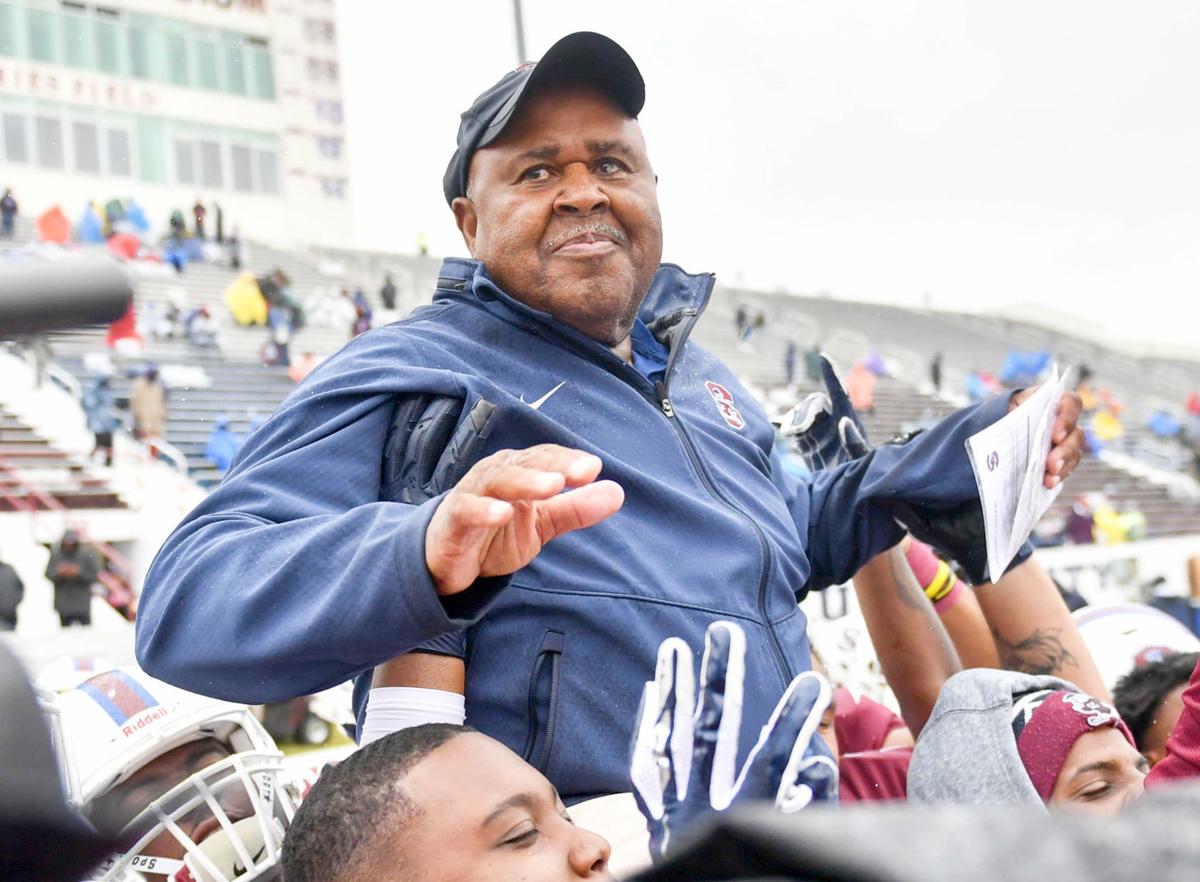 South Carolina State University head football coach Oliver "Buddy" Pough is carried from the sideline by members of his team after the Bulldogs won a 24-10 homecoming game against Morgan State on Saturday, Oct. 19, 2019.The win made Pough the all-time winningest coach in program history, eclipsing Pough's college coach, Willie Jeffries. 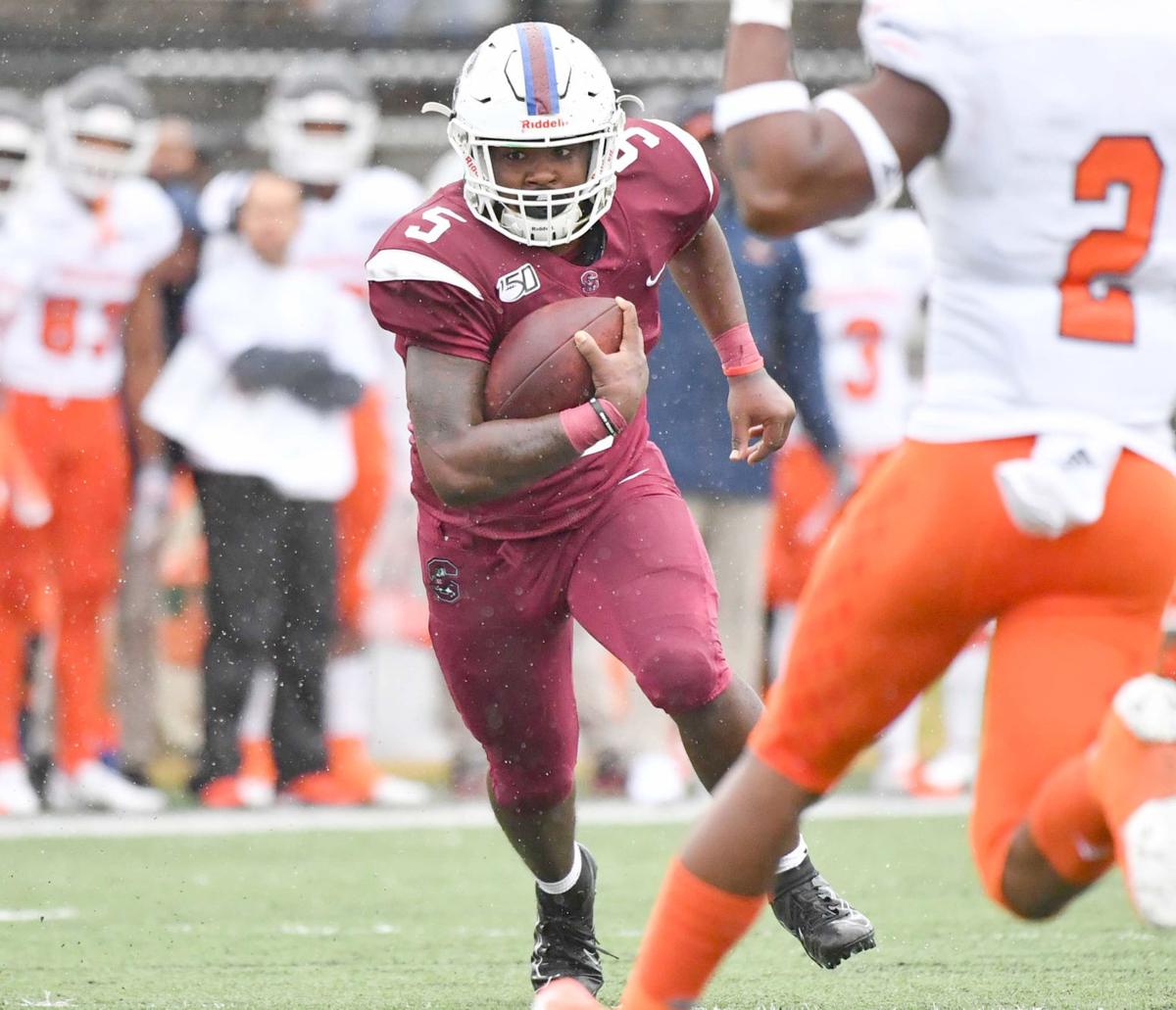 S.C. State redshirt junior tailback Labron Morris (5) runs through the rain and the Morgan State defense for some of his 125 rushing yards in Saturday's homecoming win over the Bears.

South Carolina State University head football coach Oliver "Buddy" Pough is carried from the sideline by members of his team after the Bulldogs won a 24-10 homecoming game against Morgan State on Saturday, Oct. 19, 2019.The win made Pough the all-time winningest coach in program history, eclipsing Pough's college coach, Willie Jeffries.

S.C. State redshirt junior tailback Labron Morris (5) runs through the rain and the Morgan State defense for some of his 125 rushing yards in Saturday's homecoming win over the Bears.

Pough and his college coach during his playing days at S.C. State, Willie Jeffries, were tied with 128 coaching wins apiece for the Bulldogs the past two weeks.

SC STATE FOOTBALL: Bulldogs vs. Bears and the rain for homecoming and the record

"It's been a little bit long coming, but we finally made it here and I'm happy," Pough said after the win and after being presented with a game ball from Jeffries at midfield. "You don't replace Coach Jeffries, all we did was win another game. He is always the coach emeritus around here, and we all look up to him in a way that I don't know that I'll ever match up to.

"I appreciate the opportunity to do this and I'm excited about continuing to be able to coach."

It was fitting that Pough broke Jeffries record in a conference game on the turf of Willie E. Jeffries Field.

During the postgame presentation for Pough at midfield, Jeffries made some comments for all Bulldog fans to hear.

"Coach Pough, you played here, we knew you were a special person, and you deserve this," Jeffries said. "You are an outstanding coach, even though I do kinda hate that you broke my record.

"But, Buddy, congratulations. You know that we are all family, enjoy this."

Pough also had his former high school coach, Dick Sheridan, in attendance on Saturday, along with many of his high school teammates from the last football teams at Orangeburg High School.

"It just means a lot to have had all of the great relationships that I've built over these years, from high school all the way through to college," Pough said. "Having an opportunity to be a part of a university and give your all.

"But, we've had a lot of great athletic directors and presidents and players and coaches and fans who have helped make this thing come together. I certainly appreciate it and hope that I continue to make them proud and do a good job."

A year earlier, the discussion was whether or not S.C. State would extend Pough a contract to coach for his 18th season, instead of talk leading to Saturday's postgame celebration and reaching such a career milestone. But, after Saturday's game, SC State Director of Athletics Stacy Danley said that things worked out for the best.

"I think it's great for the program and it says a lot about coach Pough and his staff, and being able to stay focused," Danley said. "We believed that we could be successful this year and that's why we are back here together as a team and he is the head coach.

"Now, we are just looking to finish the season strong. We are disappointed with the weather coming in and that we didn't have the crowd here to really celebrate coach like he deserves. We want to celebrate this with coach and with our fans the rest of this season. And the best way to do that will be to make it to Atlanta and play in the Celebration Bowl."

Saturday's win, with steady mist or rain throughout the contest, finished with statistics for the home team that more closely resembled that of teams Jeffries coached more than 20 years ago. Those numbers included a running back who finished with more than 100 yards rushing and a touchdown, along with a dominant defense that collected seven quarterback sacks and two interceptions, while allowing just 262 yards of total offense.

Redshirt junior cornerback Decobie Durant led the Bulldogs on defense with 8 tackles and an interception, while senior defensive tackle Tyrell Goodwin added a fumble recovery and 7 tackles, including 4 tackles for loss, 3 of which were quarterback sacks. Sophomore Kendall Moultrie added an interception.

The visiting Bears opened the scoring on the first offensive series of the game, finishing a 12-play drive that covered 38 yards with a Nicholas O'Shea' 39-yard field goal at the 11:07 mark of the first quarter.

S.C. State needed its fourth drive of the morning to get on the scoreboard. Goodwin recovered a fumble by the Bears, setting up the Bulldogs on the MSU 20-yard line. Four plays later, Morris carried the ball for a 3-yard touchdown, after which Dillon Bredesen added the PAT for a 7-3 lead with 11:49 left in the half.

The home team added points before the half, with a 9-play drive that covered 37 yards and ended with a 31-yard field goal from Bredesen, for a 10-3 lead.

MSU attempted a long field goal at the end of the half, but O'Shea's 46-yard attempt was blocked by junior Zafir Kelly, as time expired.

The Bulldogs scored again on the opening drive of the third quarter, with Fields finding Will Vereen for an 8-yard toss near the S.C. State sideline that the redshirt sophomore turned into a 49-yard scoring strike. Bredesen's PAT made the score 17-3 with 13:34 left in the third.

Both teams finished the third quarter with field goal attempts that never got kicked, thanks to wet conditions and hard-to-handle snaps to holders.

S.C. State scored its final points on the opening drive of the fourth quarter. Xavier Johnson recorded a sack on third down to stall a Bears drive. Then the Bulldogs covered 69 yards on 5 plays to score a touchdown. Fields connected with redshirt freshman Shaq Davis on a 41-yard scoring pass, followed by Bredesen's PAT for a 24-3 lead.

MSU answered with its only touchdown drive of the day, covering 67 yards in 8 plays, with Josh Chase catching a 14-yard touchdown pass from D.J. Golatt Jr.. Oshea's PAT made it 24-10.

Which season are you?

Stay in the game with our High School Sports newsletter!