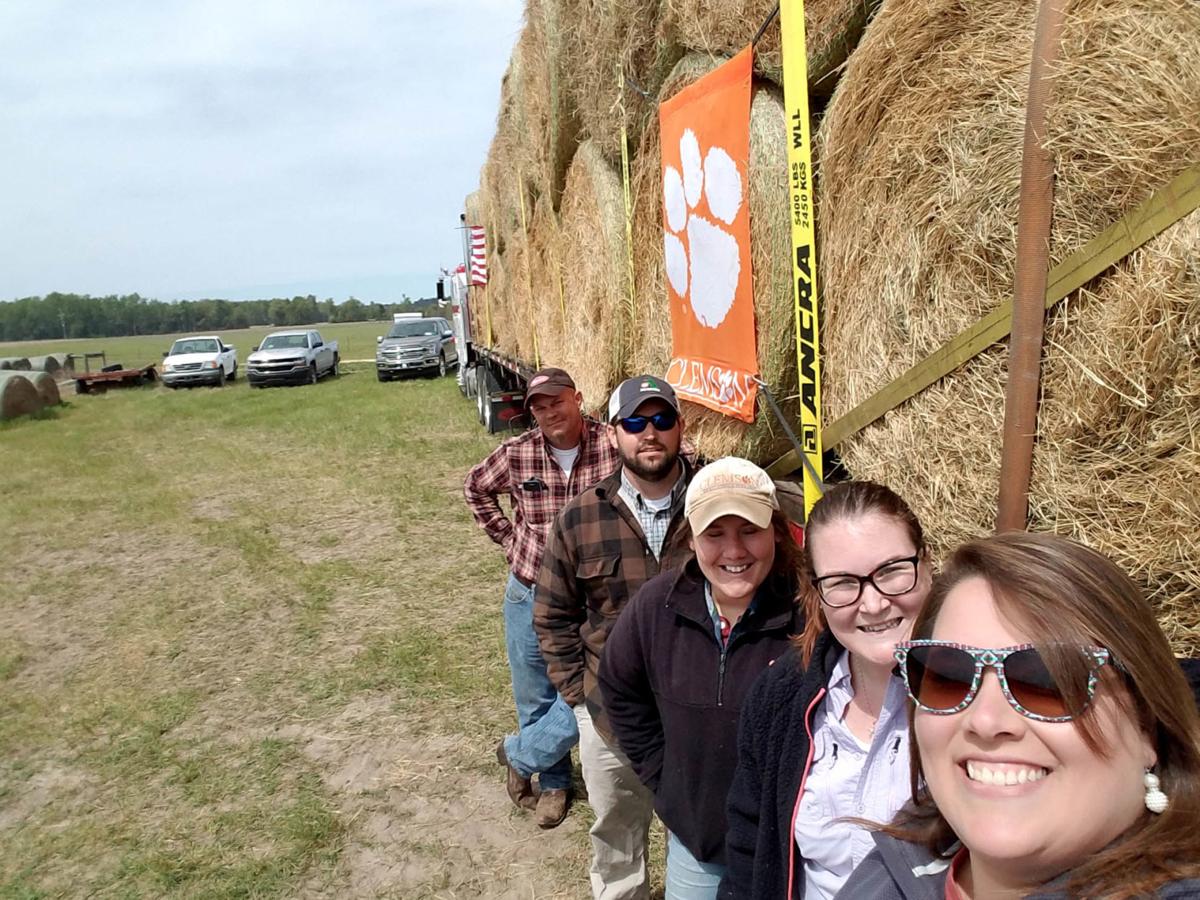 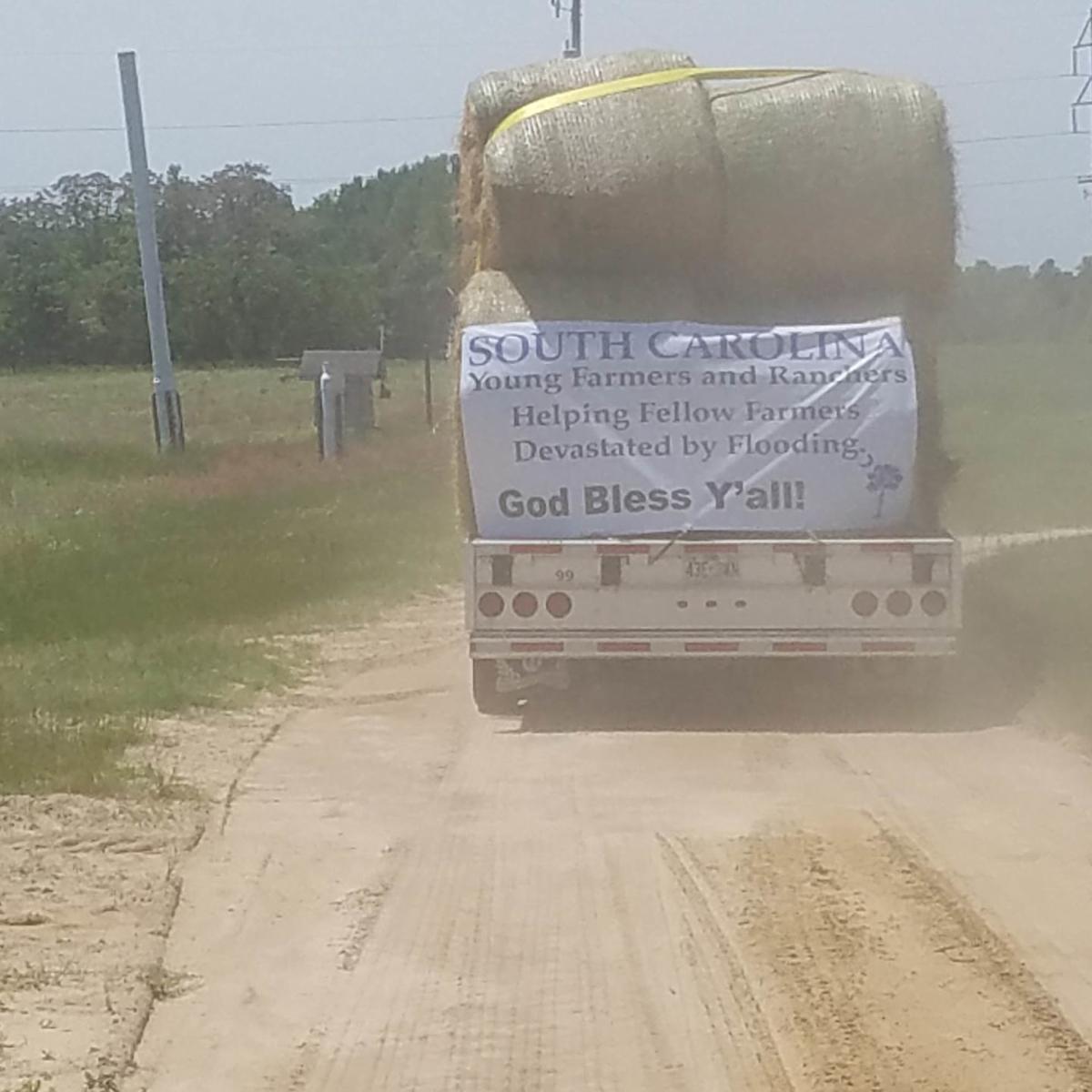 BLACKVILLE – The agricultural community is one big family and when Nebraska farmers and ranchers were hit by devastating floods, staff at Clemson’s Edisto Research and Education Center and the South Carolina Farm Bureau Federation’s Young Farmers and Ranchers program decided they needed to take action.

The hay was sent from Clemson’s Edisto REC. Gillian Tuttle, cattle technician at the Edisto REC and chair of the Aiken County Young Farmers and Ranchers, said the donation was made to help Nebraska farmers and ranchers who are in need after a blizzard resulted in flooding, leading to the loss of more than 2 million livestock.

“I know we are not technically neighbors, but I feel we are neighbors in the agriculture community,” Tuttle said. “I know that if something like that happened here, they would be doing the same.”

“As we learned what the farmers and ranchers needed, we started making phone calls,” Croft said. “We were told their hay fields were flooded and that the feed they had in storage was wet and starting to mold and become unfit for their cattle to eat. They said hay was what they needed so we started calling the South Carolina agricultural community and no one hesitated to say they would help.”

Others stepped up as well. Loni Martin of Rocky Wells Trucking posted information about the project on www.BulkLoads.com. In addition, www.FreightWaves.com also highlighted the effort.In addition, many County Farm Bureau offices and Ag industry partners have already made financial contributions to make this initiative possible.

“Hay bales tend to be stacked on the ground where ants can get in them,” Compton said. “These ants can, then, hitchhike on the hay, move to new areas and set up colonies. We inspect all hay leaving South Carolina so that we can be certain we aren’t sending fire ants with the hay.”

Compton said inspectors are stationed around the state to help ensure no imported fire ants leave the state. For information, call the Clemson Department of Plant Industry at (864) 646-2140.

Federal officials estimate the “bomb cyclone” weather phenomenon and subsequent flooding caused $1.4 billion in damages in Nebraska. Of that, livestock losses are estimated at $400 million. While insurance will cover some cattle and crop losses, it won’t cover all losses. Steve Nelson, Nebraska Farm Bureau president, said the donations are very much appreciated.

“The generosity of those who’ve donated hay and other supplies to help our Nebraska farm and ranch families suffering from the flooding and recent blizzard has been nothing short of amazing,” Nelson said. “The hay donations from South Carolina and other states have been instrumental in helping so many of our farmers and ranchers work through their immediate recovery needs. Words don’t do justice in showing our gratitude for all the help and support we’ve received from our friends across the country.”

Help is still needed. To make hay donations, contact Hutto at DEANBHUTTO@GMAIL.COM. People who have trucks and want to help deliver the hay can contact Peeler, davispeeler@gmail.com, or Loni Martin, loni@rockywells.com. Monetary donations can be online at www.scfb.org/nebraska or by check. Make checks payable to: S.C. Agricultural Aid Foundation. In check subject line, please put: Nebraska Flood Relief. Mail checks to: S.C. Farm Bureau, Attn: Jessica Cabrera, P.O. Box 754, Columbia, S.C. 29202. Anyone sending a check is asked to email Cabrera at jcabrera@scfb.org to notify her the check is on the way.

Denise Attaway reports for Public Service and Agriculture in the Clemson University College of Agriculture, Forestry and Life Sciences.