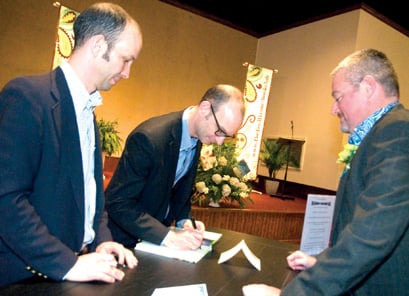 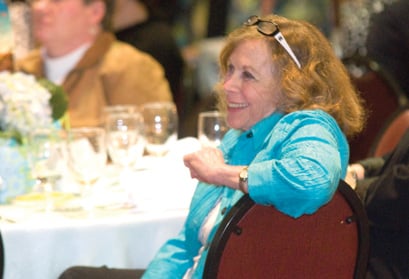 Ellyn Bache, author of “The Art of Saying Goodbye,” was one of the featured speakers at the Page Turner Book Luncheon at The Cinema.

Food and fiction lovers gathered together Tuesday at The Cinema for the fifth annual Page Turner Book and Author Luncheon and Silent Auction.

Nearly 200 people turned out for the event, a fundraiser for The Times and Democrat’s Newspapers in Education program, to hear from culinary celebrities The Lee Bros. and novelist Ellyn Bache.

“I’ve always loved newspapers,” said Bache, whose writing career began with freelance journalism. She said while the form newspapers are delivered in continues to evolve, “I’m so glad that the children growing up are still getting acquainted with newspapers.”

Through NIE, The T&D provides electronic newspapers to area schools, giving students up-to-date information about the world and daily lessons in geography, economics, math, technology, science and social studies. NIE also provides educators with tools for using the newspaper in their classrooms.

Luncheon guests were treated to a catered meal by Grove Park House of Pizza and were able to purchase the luncheon authors’ books from Swift Books, which donated 20 percent of the sales to NIE.

In addition, items were available for bidding during the silent auction portion of the event. Door prizes and table centerpieces by The Garden Gate Florist were also awarded to guests.

Following the authors’ remarks, Matt and Ted Lee and Bache signed copies of their books and greeted guests at a special display provided by North Furniture Co. Inc.

“I commend The T&D for putting on such an event,” she said.

Mary Reese of Orangeburg was at her second Page Turner event.

“I loved it,” she said. “It was so beautiful and well-handled. It was such a treat.”

Bache shared with the audience excerpts of her latest book, “The Art of Saying Goodbye,” which chronicles the transformation of several women after their neighbor is diagnosed with a terminal illness.

She said the fictional novel is based on a real-life experience that occurred years ago in a neighborhood she once lived in: A well-liked woman in her mid-40s was diagnosed with cancer and died shortly thereafter.

“You are profoundly affected, and it changes you in a number of ways,” Bache said.

The same held true for her characters.

“By the end of the book, they are more mature people ... and are able to go on with their lives like they weren’t able to before,” Bache said.

While the novel’s subject matter was depressing, it was important to Bache that the book not be.

“The way you write about a serious subject is you make at least one of your characters a lot of fun,” she said.

As for the main character, “I got the idea of letting Paisley tell her own story ... vignettes when she’s strong and vibrant. ... She’s suffering and dying, and I didn’t want her to be remembered that way.”

Bache, who grew up in Washington, D.C., but now lives in Greenville, said she loves to write.

While he and Matt Lee were born in New York City, Ted Lee said their formative years were spent on East Bay Street in Charleston.

“We arrived in this town that was so much different than New York City,” he said. “The kids — our new friends in Charleston — knew things, like how to catch blue crabs, ... how to throw a cast net, ... how to shuck an oyster.

“We didn’t realize how much we learned about food and cooking in Charleston until we both went to schools in the Northeast.”

Homesick, they decided to cook some boiled peanuts. And Lee Bros. Boiled Peanuts Catalogue was born, with the mission to “ship boiled peanuts to Southerners like us who were stuck somewhere else,” Ted Lee said.

They began their second career as food and travel journalists — writing about the South and creating accompanying recipes — after they were asked to pen a piece about searching for great food in South Carolina.

“People in the South eat differently from place to place, which is something new for other people to realize,” Ted Lee said.

Charleston “truly is a special place,” Matt Lee said. “Charleston is happening right now, and yet there’s an aspect of Charleston cooking that doesn’t happen in the restaurant world ... and that’s home-cooking.”

“We wanted to get every aspect of the Charleston food scene that we hadn’t seen,” he said.

The recipes are accompanied by stories, which Matt Lee said led to the development of a walking tour in the book.

“We love that it reflects the feeling of being in Charleston, as well as the flavors,” he said of “Charleston Kitchen.”

While Matt Lee said the world won’t be seeing a Lee Bros. restaurant, Ted Lee did offer up a list of some of his favorite restaurants in Charleston. The Wreck in Mount Pleasant, Hominy Grill downtown and Bowen’s Island in Folly Beach make his short list.

Writing “is really a journey for us,” Matt Lee said.

“I’m not hungry for time in front of my keyboard,” he said. “What drives me forward is the opportunity to connect with people.”

“The turnout for the Page Turner luncheon benefitting Newspapers in Education was outstanding, and it appeared the attendees enjoyed the program,” T&D Publisher Cathy Hughes said. “We felt The Lee Bros. and Ellyn Bache complemented each other perfectly, and the question-and-answer session with the authors was lively, as were the book-signing sessions. Thanks to all our sponsors and business partners for helping produce this event.”

Ellyn Bache, author of “The Art of Saying Goodbye,” was one of the featured speakers at the Page Turner Book Luncheon at The Cinema.