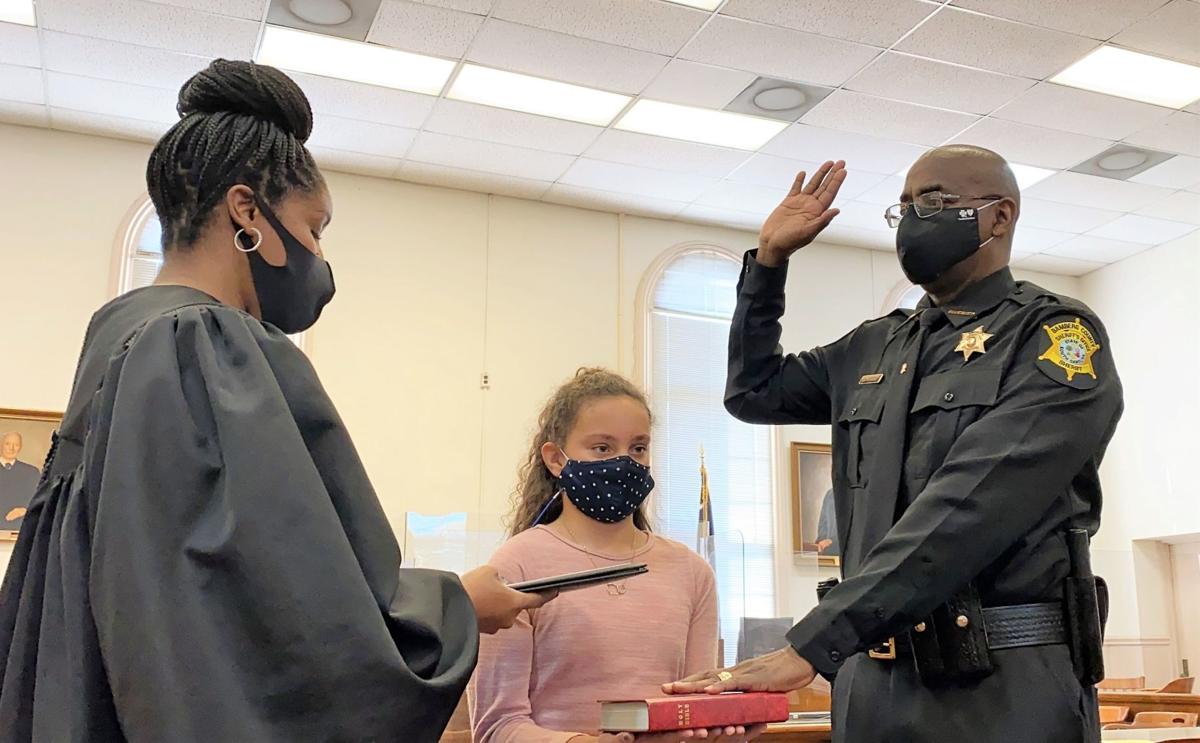 Circuit Judge Clyburn Pope administers the oath of office to Bamberg County Sheriff Kenny Bamberg while his granddaughter, Aubree Bamberg, holds the Bible on Jan. 5 at the Bamberg County Courthouse. 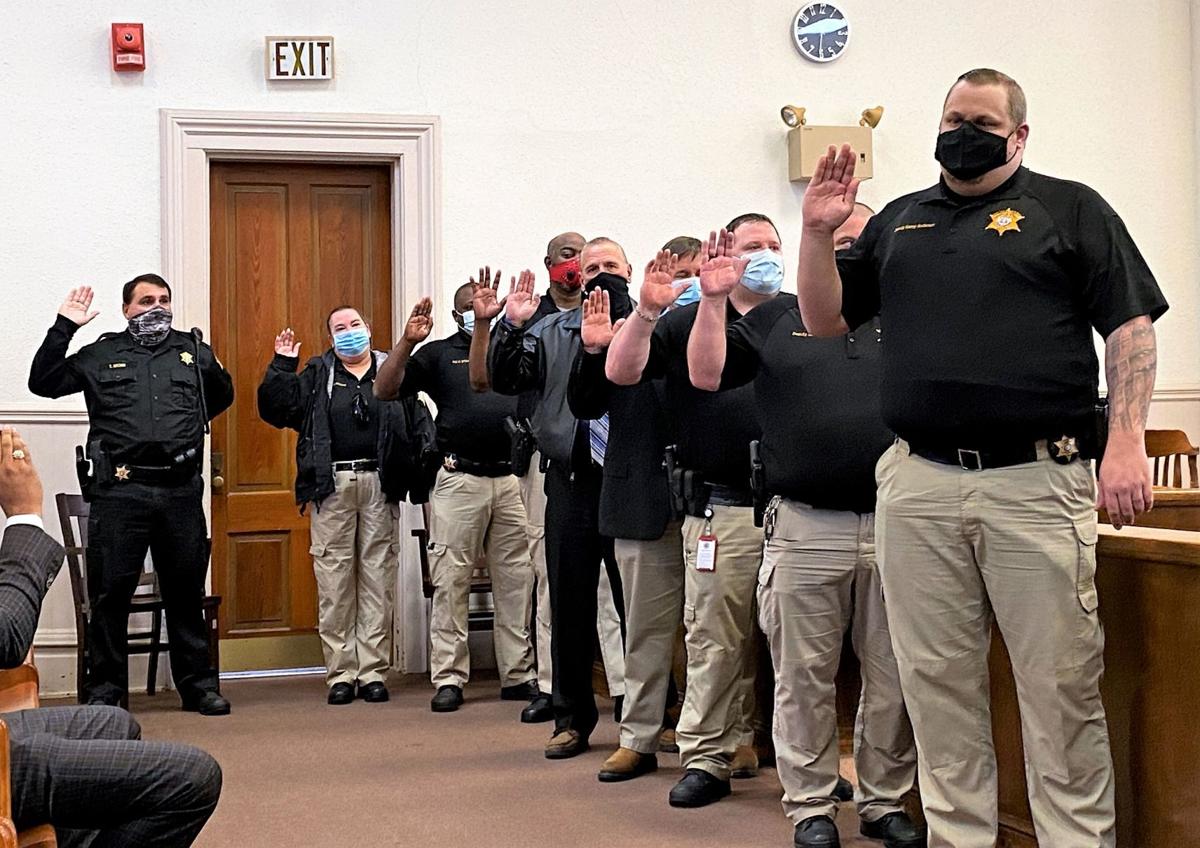 BAMBERG – There’s a new sheriff in town and his name is Kenneth “Kenny” Bamberg.

Bamberg, 57, took the oath as Bamberg County’s sheriff on Tuesday.

“We’re going to do what we’re supposed to do: accountability and responsibility. We’re going to enforce the law and be fair, firm and consistent. It doesn’t matter who you are, where you come from, who your family is, doesn’t matter,” Bamberg said moments after taking office.

“We are in the law enforcement business and that is what we’re going to do,” he added.

After serving as sheriff for 42 years, Ed Darnell did not seek re-election last year. Bamberg, a Democrat, defeated a Republican challenger in November.

Upon taking office, Bamberg thanked voters for electing him.

“I’m thankful to lead their office because it’s not Kenny Bamberg’s office, this office belongs to the people of Bamberg County and we’re going to protect and serve,” he said.

Bamberg thanked the nine deputies who’ve chosen to stay on board.

Two deputies retired after “a long, long history of service to Bamberg County,” he said.

The sheriff’s office is looking to hire a total of three certified officers.

Three additional deputies, “will allow us to more adequately and efficiently and effectively serve the citizens here in Bamberg County in providing good, quality service to the community,” Bamberg said.

Bamberg is the first Black sheriff to serve Bamberg County since it was formed in 1897.

“I do understand the historical perspective of it and I would not be here today if it were not for the sacrifices of many, many people who have come before me,” he said.

Bamberg expressed appreciation for the late Charles H. Grimes Jr., who served as the chief deputy of the Bamberg County Sheriff’s Office from 1978 until 2007.

“Chief Deputy Grimes broke barriers, he knocked on doors, he opened a lot of doors for a lot of people in law enforcement,” Bamberg said.

Being the county’s sheriff and first Black sheriff “is a huge honor,” Bamberg said. “It’s something I take very seriously.”

“When everything is said and done, I don’t want to be boxed in or defined as a Black sheriff, I want to be recognized at the end of my term, or terms, whatever they may be, as a good sheriff. That’s what it’s all about,” he said.

Bamberg began his law enforcement career in 1982 while enlisted in the U.S. Army. As a military policeman, he enforced laws and investigated crimes on major military installations in the U.S. and abroad.

After being honorably discharged from the Army in 1993, Bamberg worked as a civilian law enforcement officer from 1993 to 1995 with the Blackville Police Department.

In 1995, Bamberg began working as one of the first school resource officers with the Barnwell County Sheriff’s Office.

He returned to the Blackville Police Department as a captain from 1996 to 2002.

After serving one year as an investigator with the Second Judicial Circuit Solicitor’s Office, he was hired to be chief of police for the City of Blackville from 2003 to 2006.

Up until he became sheriff, Bamberg worked as a senior investigator for the 2nd Circuit Solicitor’s office, a position he held since 2006.

He is married to Ronda Bamberg and has two adult sons, Brandon and Rep. Justin Bamberg, D-Bamberg.

Sheriff Bamberg is the youngest child of Virgie and the late Franklin Bamberg Sr.

“I’m very, very proud of him and his accomplishments,” said his sister, Joanne Bamberg Jackson. “I think he will do an excellent job as sheriff.”

“The one thing I can say about Kenny is that he’s fair and he will be consistent in his fairness,” she said.

An autopsy has resulted in potential identifiers being discovered on an individual found in a freezer in the Norway area, according to Orangeb…

Man shot in neck in Orangeburg

Man charged with exposing himself in Orangeburg store

A driver was ejected from a vehicle and died in a collision in Orangeburg County on Friday night, according to S.C. Highway Patrol Master Troo…

A pedestrian died Wednesday night after being struck by a vehicle in Orangeburg, according to S.C. Highway Patrol Lance Cpl. Tyler Tidwell.

An autopsy has resulted in potential identifiers being discovered on an individual found in a freezer in the Norway area, according to Orangeb…

Four people have been charged following the theft of catalytic converters over the weekend. The thefts occurred in two separate incidents.

A man is facing cocaine charges after weapons and drugs were allegedly found in a Neeses home.

The Orangeburg County Legislative Delegation picked Sen. Brad Hutto to be its new chair during a virtual meeting Monday night.

Circuit Judge Clyburn Pope administers the oath of office to Bamberg County Sheriff Kenny Bamberg while his granddaughter, Aubree Bamberg, holds the Bible on Jan. 5 at the Bamberg County Courthouse.