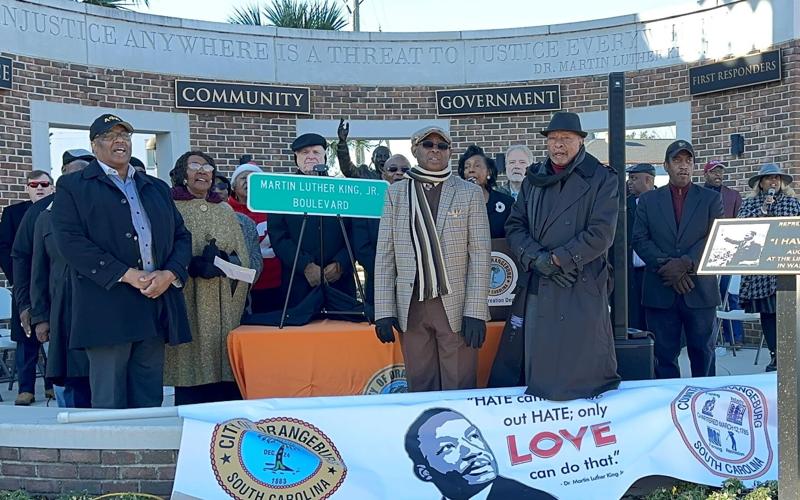 Orangeburg County and City of Orangeburg officials unveiled a new “Martin Luther King Jr. Boulevard” sign on Amelia Street in Orangeburg on Monday at the memorial to the slain civil rights leader. 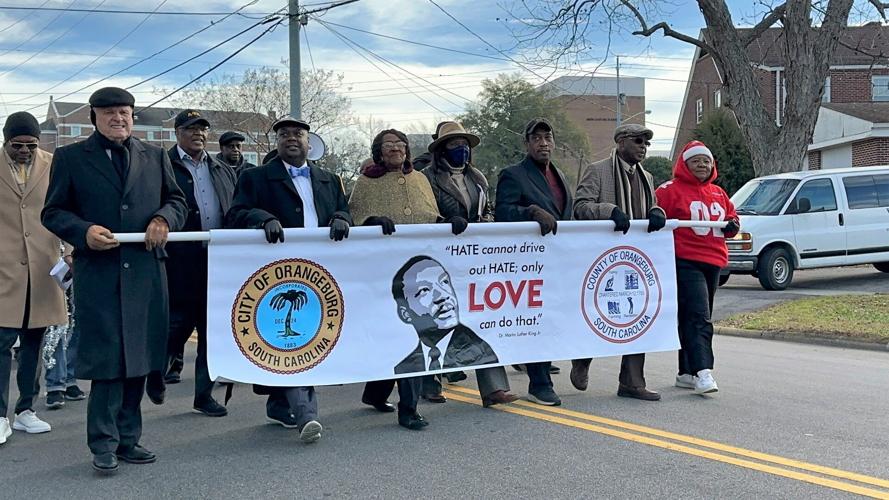 Local government officials and residents marched from Trinity United Methodist Church to the Martin Luther King Jr. memorial on Monday morning. The memorial is located next to the Orangeburg County Courthouse.

Orangeburg honored Dr. Martin Luther King Jr. on Monday by naming Amelia Street after the civil rights leader who inspired so many in the community.

“We are honoring a leader who made a difference in the lives of African Americans and all who have been discriminated against only because of the color of their skin,” Orangeburg Mayor Michael Butler said during a morning ceremony.

“I say with great pride that Orangeburg has now joined cities across the nation who have named streets or highways and also erected monuments to memorialize the life and legacy of the iconic civil rights leader,” he said.

A crowd of local leaders and residents began the event by marching from the historic Trinity United Methodist Church to the King memorial at the side of the Orangeburg County Courthouse, a distance of just over one half-mile.

At the courthouse, officials unveiled an official sign for Martin Luther King Jr. Boulevard. The Amelia Street name will continue to be used for official purposes, such as mailing addresses.

“This is a momentous occasion,” said Henry J. Robinson. He and his wife, Sylvia, participated in the march and attended the ceremony.

“It’s long due. Martin Luther King Jr. visited Orangeburg. He visited my church many years ago and we still celebrate him there and the things that he stood for and so we’re just glad to be part of Trinity United Methodist Church,” he said.

Trinity, which played a noted role in the civil rights era, is on the National Register of Historic Places. It is located at the corner of Amelia and Boulevard streets.

“It’s more than fitting that the march started there,” Robinson added.

Sylvia Robinson said, “I’m very proud to be here and give support to our council people who made the preparations to make this possible today.”

Jerrod Anderson brought his son to the event, “just to remember it’s not where you come from but where you’re going.”

“This is a great way to honor his legacy and what he stood for,” he added.

“I can hear the late councilman Willie B. Owens in my head. He was for years saying, ‘Johnnie, we’ve got to name something for Dr. Martin Luther King Jr.’” he said.

Wright said he urged Owens to reach out to City of Orangeburg officials.

“He did and here we are today,” Wright said.

“I know there are people who say the spirit can see certain things. If it can, I know Mr. Willie B. is smiling where he’s at that we got this accomplished because he was adamant that we get this done,” Wright said.

Orangeburg City Administrator Sidney Evering II said, “This would not be possible without the vision and persistence of councilman Owens.”

In his remarks, he said, “What is a road? What is a street? A boulevard? A road is, quite simply, a way. A way that leads from one point to another.”

Evering likened King to paving the road, “in leading the country from injustice to justice, from inequality to equality, from bondage to freedom, from violence to peace, from strife to brotherhood and above all, from hatred to love.”

“However, let us not doubt that we have certainly traveled down the long road to making his dream a reality but still undoubtedly we still have many, many more steps to take,” he said.

After the ceremony, Arminta Owens, wife of the late Willie B. Owens, said the street-naming effort and ceremony was, “a delight because Willie always thought the world of Dr. Martin Luther King Jr. and I did too.”

She noted that early in 2022, her late husband and Orangeburg County Council began to take the steps needed to have Amelia Street named in King’s honor.

“Here today, it’s a reality. A true reality,” she said.

“I will talk to him in the house or on his bedside tonight and I’ll go down to McBranch Baptist Church, in Branchville, where he was born and grew up and share that with him by his gravesite,” she said.

What you need to know:

Orangeburg County’s election director is asking city officials to change their elections from September to November, to match up with most oth…

Orangeburg County and City of Orangeburg officials unveiled a new “Martin Luther King Jr. Boulevard” sign on Amelia Street in Orangeburg on Monday at the memorial to the slain civil rights leader.

Local government officials and residents marched from Trinity United Methodist Church to the Martin Luther King Jr. memorial on Monday morning. The memorial is located next to the Orangeburg County Courthouse.