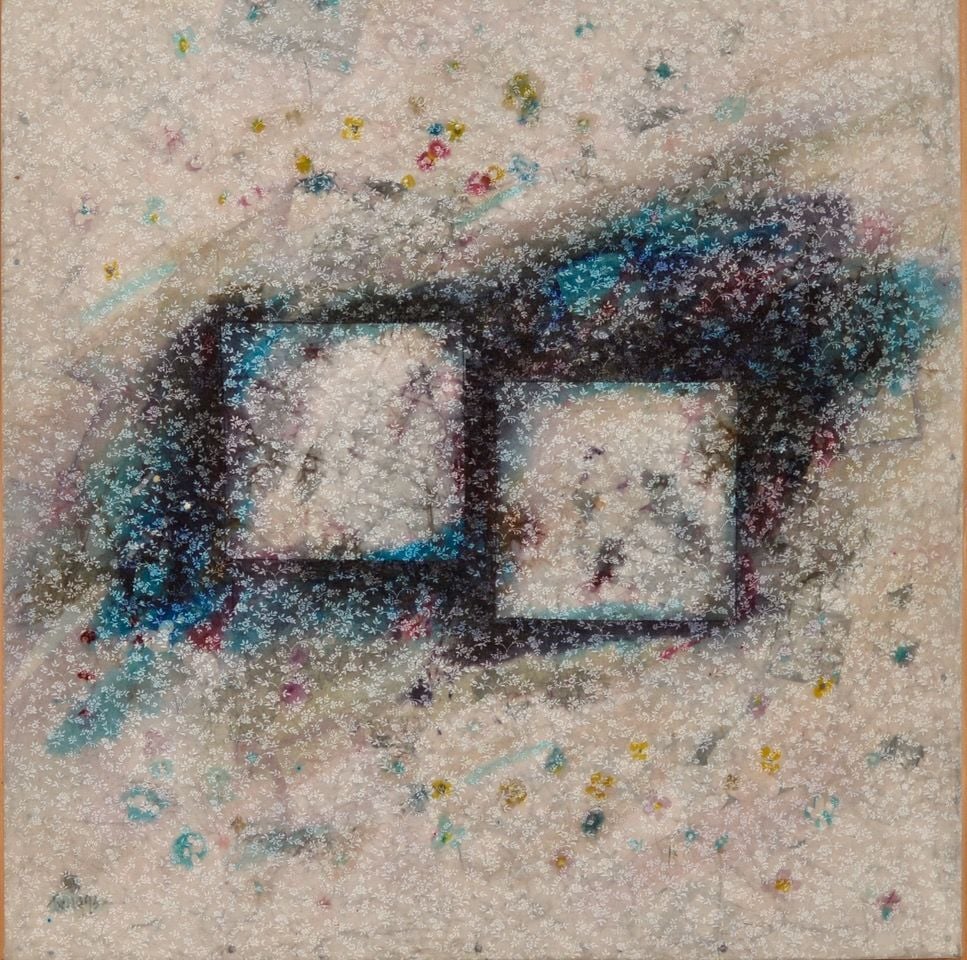 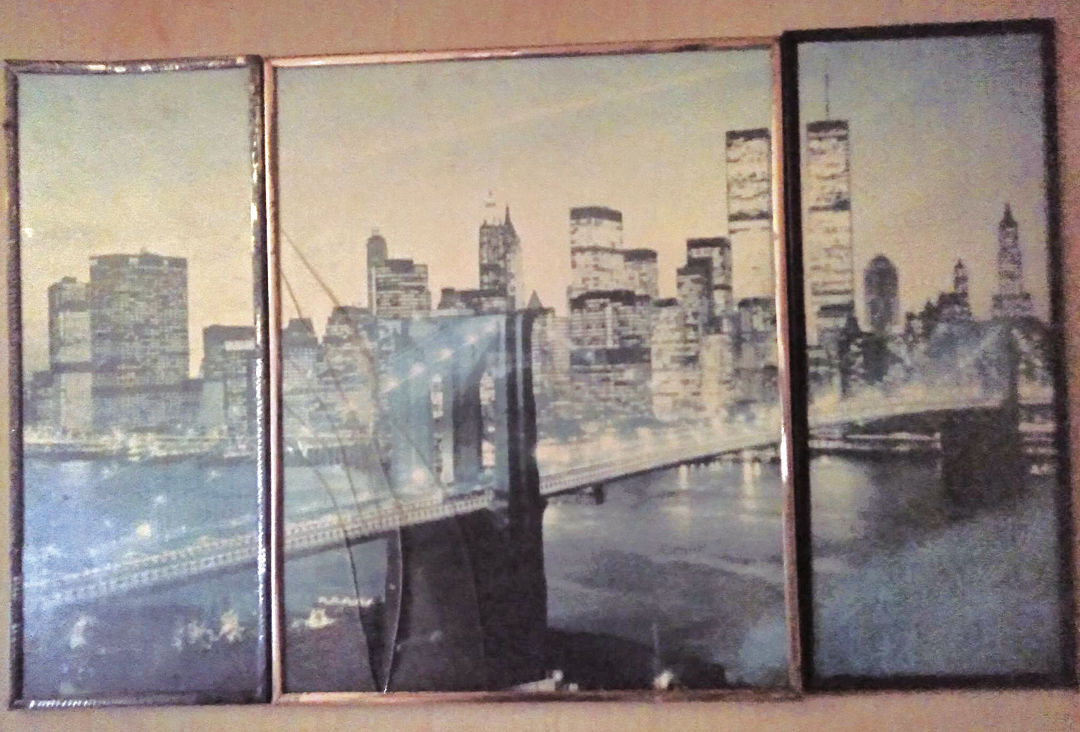 David Franklin bought a photo of the World Trade Center at a yard sale the weekend before 9-11-2001. The image hangs in his office today.

My sister was visiting from New York City and was supposed to return on Sept. 9/10. Before she left, we went to a yard sale and saw a three-piece picture of the World Trade Center that I bought for a dollar, not knowing what was about to happen on that dreadful Tuesday, 9-11.

I took my sister to the train station that Sunday/Monday to depart for New York. She had worked in the area of the World Trade Center and was to be going to work on that Tuesday, 9-11. And then it happened.

I was watching it from my office. I was devastated because I knew my sister had just returned and had worked in that area. Lord, I was going out of mind, unable to get through to my sister on her cellphone. I was about to go into cardiac arrest.

I said, "Lord let my sister be OK," and he did. Making a long story short, by the grace of God, my sister did not go to work that day. She was exhausted and decided to stay home on 9-11. After almost two days, I finally heard from her.

Today that picture of the World Trade Center hangs in my home office. My sister retired five years ago and now lives in Columbia. I am now retired also.

Every year, remember those who lost their lives on that dreadful day of Sept. 11, 2001. Let's not forget.

'The End of Innocence'

Sept. 11, 2001, marked the first massive attack on our American mainland. Until then, we felt invincible. Such incidents happened “over there” in Europe, or in the Middle East, not here. It changed us, we no longer felt secure.

I did a painting about a week after the tragedy. It is a view of the twin towers from the sky on a print of dainty flowers stained with dark sooty smoke. I call it “The End of Innocence” to symbolize the destruction of what we had come to believe was a comfortable, permanent way of life.

On that fateful date, it was election day in the City of Orangeburg. At 7 a.m., I went to my polling place to vote. Then I made rounds around the city to all the other precincts. Returning to my office, I received several phone calls telling me I needed to turn on my television. Now during this time and for the next several hours, all eyes were glued to the television, so it looked like voting was not going to be much of a priority.

Later in the afternoon after the shock of these horrific events in NYC, Washington, D.C., and Pennsylvania, people started to go to the polls to cast their vote. At the end of the day, this election was over, and I was elected mayor. Many thanks to everyone who went and took the time to vote.

What happened after 9-11 was a nation united. Citizens across the U.S. displayed our flag showing support for America. Regrettably, sometimes it takes something tragic to wake us up. History repeats itself like when Pearl Harbor was attacked and when we fought the Japanese and the Germans in World War II.

Americans, men and women, went off to war. Our women worked in our factories to sustain our war effort.

Going to war for a united USA

“I was an Infantry captain stationed at Fort Benning, Georgia, on Sept 11, 2001, having served in the Army for just over a decade with three deployments to the Middle East. I vividly remember a fellow captain telling me about a plane hitting the World Trade Center, and then watching in real time when the second plane hit.

The world changed for America in that moment as the second plane made clear this was no accident. That night, after the Pentagon was hit, Flight 91 went down, and the trade center towers collapsed (with initial estimates of tens of thousands dead).

I will never forget Democrats and Republicans in Congress holding each other and singing "God Bless America." I will never forget the nation turning to God for protection and strength following Sept. 11. I had never seen America more united and religious. America was firmly behind Operation Enduring Freedom to oust the Taliban and Al-Qaeda from power in Afghanistan.

I proudly volunteered to serve in Afghanistan a few years later. I will never regret that service, and all who served should be proud.

In the years after Sept 11, 2001, I came to a much stronger faith in God, but I am disturbed by much of America seeming to have turned away from God since the attacks. The unity and commitment to America and American values is so lacking. I can’t imagine Congress singing "God Bless America" together. I believe we need to regain our national unity and faith in reflecting on 9/11.

Make the most of each day

My life has changed significantly since Sept. 11, 2001. I no longer take for granted the sanctity of life and the pursuit for freedom by those who flee their homelands in the face of persecution and tyranny.

The images of 9/11 still seem so surreal, yet the devastation was unfolding before my very eyes. I was teaching a high school class in New Orleans on that day. We were told to turn on our TV monitors because a catastrophic event was taking place in the heart of New York City.

I remember the shock and awe of the students as we watched the horrifying images. I asked myself, " Why is America under attack?" I soon learned that three other attacks by terrorists were also happening in other parts of the country.

On American soil, the lives of innocent people were impacted. At the World Trade Center's twin towers, scenes of people running scared in the streets and first responders frantically rushing to save lives remain fixed in my mind even today.

I had the opportunity in 2010 to visit the memorial site where the twin towers once stood. It was a solemn and unforgettable experience. I even decided to make a photo album as a keepsake of that traumatic day.

I realize that life is precious and fleeting. Since 9/11, I have made it a daily habit to make the most of each day. I have learned to listen to and embrace others as much as possible, build friendships and family relationships, and pursue good causes because HUMANITY matters in this country and world, which are both changing in unimaginable ways.

We will not forget

And we more than likely remember where we were. I was in my office at The T&D following the breaking news on a small television — just after the first attack and before the second of the twin towers was hit. It was also before streaming TV on the internet.

Dede from the chamber called. We shared shock and disbelief, until we hung up and she came to my office to watch together as the events continued to unfold. There was nothing to do but watch, like millions of others around the country and the world.

But then there was something to be done. Our people at The Times and Democrat gathered and quickly planned for the first EXTRA edition any of us had ever worked on. We printed and delivered a four-page special that Tuesday afternoon of Sept. 11, reporting in print the breaking news practically as it was occurring. Today we post breaking news on our website TheTandD.com.

We, like many other media outlets, are reporting on this historical event again today — 32 extra pages in print in a Saturday edition. That’s probably another first for many of us at The T&D — a Saturday edition this big. But we fel strongly that the 20th anniversary of this life-changing event was worth this type of commemoration. We could not forget.

Throughout the 20 years since “9-11,” The Times and Democrat has published a We Will Not Forget poster as a memorial to the 11 local individuals who lost their lives in the wars in Iraq and Afghanistan. Originally on the 9-11 anniversaries, it was extended with the support of local sponsors to four times a year. We’ve published this tribute today, although today’s poster is expanded to a 16-page local special section with the sponsors highlighted in it, as well as other sponsors of this tribute section.

As you read our special coverage — including a separate 16-page section with a national tone -- and other coverage throughout this 20th anniversary weekend, it is important that we do not forget. We did not forget. WE WILL NOT FORGET.

Included in this collection is coverage from The Times and Democrat's special section on 9-11-2001 that is part of the print edition of Sept. …

With the catastrophically misguided withdrawal plan from Afghanistan, the world watched as mayhem ensued after the Taliban seized power.

'We will not forget': Pain remains for T&D Region families as they cope with losses in wars

Vivian Huffman remembers the smart and loving child she raised but had no idea would embark on a military career. Now more than 16 years after…

Not yet born on 9-11, Lake Marion students mark anniversary

David Franklin bought a photo of the World Trade Center at a yard sale the weekend before 9-11-2001. The image hangs in his office today.