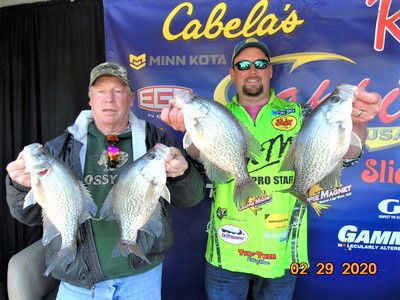 Dean Sanders of Cope and Matthew Outlaw of St. Matthews display some of their winning catch in the Pro Division of the Crappie USA Super Event on the Santee Cooper lakes the last weekend of February. 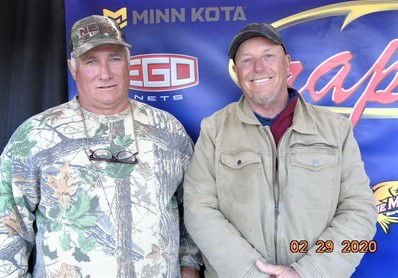 Rickey Rickenbaker of St. Matthews and John Johnson of Swansea placed third in the Amateur Division of the Crappie USA Super Event on Santee Cooper lakes the last weekend of February.

SANTEE – Crappie anglers from nine states traveled to the lakes of Santee Cooper to participate in the Feb. 28-29 Crappie USA Super Event.

Bass Pro Shops and Cabela’s presented the tournament for local and traveling anglers. Competitors were vying for cash, prizes and an opportunity to compete at the 2020 CUSA Classic, which will feature a guaranteed payout of $125,000 in cash and prizes.

Anglers battled strong winds and muddy water in what turned out to be a tough bite at the popular destination. Friday winds varied from 10 to 25 mph from the southwest with temperatures in the low 40s. Saturday was similar temps but the winds changed to WNW at 15 to 30. Anyone familiar with Santee Cooper knows that winds can make for a tough day on the big lakes.

The event was actually a combo event. Anglers from “Fish the Carolinas” could also fish the CUSA event.

“We enjoyed working with the Fish the Carolinas club,” said Darrell Van Vactor, CUSA operations manager. “Many anglers were able to compete in both events.”

A total of 45 boats fished the Santee Cooper event — 23 in the Pro Division and 22 in the Amateur Division. A total of $12,000 was distributed to the winners.

Matthew Outlaw from St. Matthews and Dean Sanders from Cope claimed the top spot in the Pro Division with a two-day total weight of 25.79 pounds. They earned the first-place check of $3,000 and added the $300 Driftmaster Bonus for using all Driftmaster Rod Holders on the boat.

Outlaw and Sanders spider rigged in lower Lake Marion. They were pushing in 5 to 10 feet of water. The reels were spooled with 8-pound Slime Line and rigged with Crappie Monster Upper Cut jigs and 1/8-ounce Rockport Rattler heads.

“The lake is high and muddy,” Outlaw said. “It made tough conditions for finding numbers and size of fish. We were pushing B’n’M poles set in Driftmaster Rod Holders.”

“We slow trolled and found suspended fish with the Garmin Livescope,” Outlaw said. “It was tough fishing, only catching about 10 fish a day. We had a strong morning bite that ended around 10 a.m. and an almost nonexistent bite after that.”

Sell, manage or status quo? Report out on Santee Cooper

The runner-up spot went to Lynn Robertson from Lancaster and Robert Jackson from Camden. They teamed up to bring a two-day total of 24.14 pounds to the scales and earn $2000. Their bag included Big Fish of the tournament for an additional $750.

Third place went to Joey Hilton from Rock Hill. He fished solo to bring 19.8 pounds to the scales and earn a check for $1,000.

The team of TC Lloyd from Hartsville and Mike Huffstedler from Chapin took the fourth spot with 18.67 pounds. They earned a check for $600.

The top spot in the Amateur Division went to Chuck and Tracy Davis from Lexington. They brought a two-day total weight of 12.53 pounds to the scales. They earned the first-place check of $1,500 and added the $125 Driftmaster Bonus for using all Driftmaster Rod Holders on the boat.

Team Davis long-line trolled on Lake Moultrie in the Angels Landing area. They were using Skinny Minnie jigs tipped with live bait. Tracy reported that blue/chartreuse worked best. The team caught 20 to 25 fish for the 2 days of tournament fishing.

“We prefished last week on Saturday,” Chuck Davis said. “The wind was too bad all that week to fish. We decided to try our spot on Friday because there was supposed to be a break in the wind. We got a five-hour break with no wind and we caught our limit.”

The wind prevented them from fishing the same area on Saturday. They went to their alternate place and caught a few fish.

“It was just enough to keep us on top,” Chuck said. “We were using black/yellow Slab Head jigs. We caught most of our fish around Angel's Landing on Lake Moultrie.”

Andy Adams from Loganville, Ga., and Brad Davis from Social Circle, Ga., took second place in the Amateur Division with 12.32 pounds. They earned a check for $1,000.

Third place went to John Johnson from Swansea and Rickey Rickenbaker from St. Matthews. They brought a two-day total of 11.29 pounds to the scales and earned a check for $500.

The local team was spider rigging in Lake Marion. They were pushing live bait in 7-foot water to catch a total of six fish each day.

The fourth spot went to Jeff Lowdermilk from Morganton, N.C., and Brian Stacey from Bostic, N.C. They had a two-day total of 9.99 pounds to earn the fourth-place check of $300.00.

Van Vactor sent special thanks to Mayor Donnie Hilliard and Santee for hosting the event. He also thanked Nate Quan and "Fishing the Carolinas" club for working together to make the combo event a huge success.

"We were proud to have Dan Wagoner working with us at Santee Cooper lakes this weekend,” added Van Vactor. “Dan was one of my original partners in Crappie USA. He has worked very closely with me for over 33 years managing crappie events since the Crappiethon days. Dan retires today after heading up our graphics department since 2004. He has not only been a very valuable employee but one of the closest friends I have ever had. I wish Dan the very best in retirement.”

The CUSA Classic Championship will be held Oct. 22-24 at Green River Lake, Columbia, Ky. The 2020 Classic, presented by Bass Pro Shops and Cabela's, features a guaranteed payout of $125,000 in cash and prizes.

COLUMBIA -- South Carolina has received approval from the U.S. Department of Agriculture to implement a Pandemic EBT (P-EBT) program, providin…

A 14-year-old Orangeburg girl is recovering from a gunshot wound she received while she was asleep early Wednesday, according to an Orangeburg…

Investigators are seeking the identities of several individuals caught on security camera allegedly shooting at one another, according to Oran…

Dean Sanders of Cope and Matthew Outlaw of St. Matthews display some of their winning catch in the Pro Division of the Crappie USA Super Event on the Santee Cooper lakes the last weekend of February.

Rickey Rickenbaker of St. Matthews and John Johnson of Swansea placed third in the Amateur Division of the Crappie USA Super Event on Santee Cooper lakes the last weekend of February.