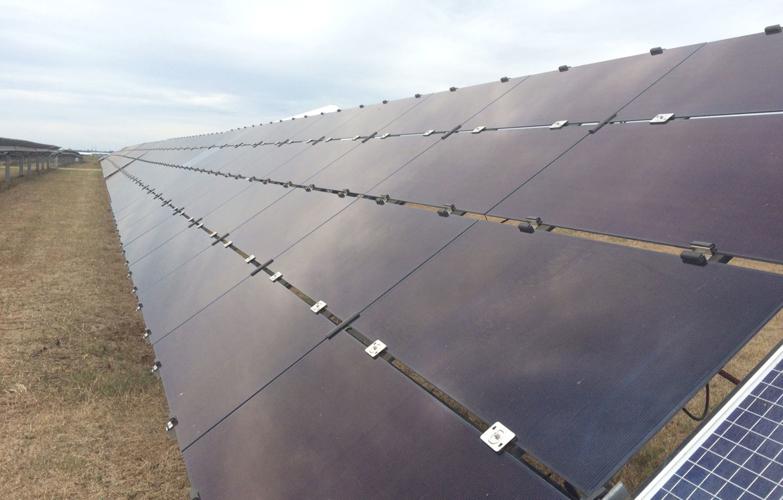 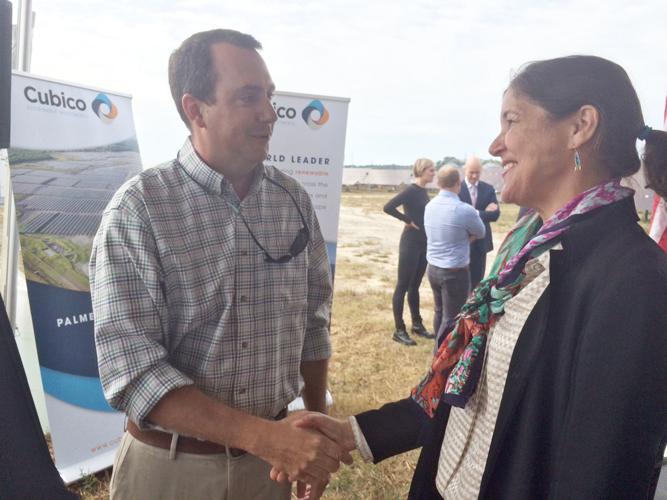 BOWMAN -- Sunshine and an excited energy filled the air on Tuesday as officials celebrated the powering up of South Carolina’s largest solar farm, Palmetto Plains.

"This project will produce clean energy and new tax dollars for the community for decades to come," Cypress Creek Renewables CEO Sarah Slusser told those gathered at the farm for the symbolic power-up ceremony.

"Cypress Creek is a national solar company and it is creating jobs that will benefit communities for decades with affordable, emissions-free power; a long-term source of stable revenue; construction and operation jobs and economic investment."

The solar farm is located on Bowman-Branch Highway on a site known to many locals as Weathers Farm. The farm is located cross the street from the former Bowman High School.

The project will provide the county with about $5 million in tax payments over the 40-year term of the company’s fee-in-lieu of taxes agreement.

The property, like all the county's solar projects, is on leased land. No permanent jobs have been promised, but about 500 employees worked on the site during its construction over a six-month period.

Despite some light rain drops, sunshine did peak through the clouds for Tuesday’s ceremony celebrating the new farm.

"We are on the cutting edge here and we call ourselves the solar capital of the state of South Carolina," Orangeburg County Council Chairman Johnnie Wright told those gathered.

"Orangeburg County is pro-business and we put economic development at ... our forefront,” he said.

Together, the Huntley and Palmetto Plains projects will provide $11 million in local tax revenue for Orangeburg County over the expected 40-year operational life of the projects.

Cypress Creek will handle the long-term operation and maintenance services for both projects.

Overall, Cypress Creek has been involved with six solar farms in The T&D Region with an investment of about $350 million and providing about 400 megawatts of power.

Slusser said Cypress has partnered with Orangeburg-Calhoun Technical College to provide $10,000 in scholarships for Bowman-area students to pursue engineering degrees.

"Our hope is that this gift and the solar farm in the Bowman community will inspire students to seek jobs in renewable energy," Slusser said.

Oliver Alexander, head of Cubico USA's division, praised all the partners that have made the solar farm a reality. He said that the company has partnered with Clemson University to provide college scholarships for low-income engineering students who will pursue a career in clean energy.

An application process will be circulated locally and students will be provided with work experience at the solar farms.

"I am just as proud as I can be to be standing here in the largest solar farm in the state of South Carolina," said Rep. Gilda Cobb-Hunter, D-Orangeburg. "When we talk about innovation, Orangeburg County is not shy about leading the way in innovation and innovative research."

"This solar farm is an example of that," Cobb-Hunter continued. "We intend to become the largest solar capital not just in South Carolina ... we are growing and we intend to keep growing."

Cobb-Hunter praised the leadership of the Weathers family, which leased the property to Cypress Creek for the solar farm.

Landy Weathers, who owns the land along with his brother, Hugh, said the discussions about leasing the farmland have been going on for about the past five years.

"Our job as farmers and the owners of properties is to do what we think is best for the property not for right now but for the future," Weathers said.

S.C. Lieutenant Governor Pamela Evette said, "In South Carolina, we talk about our natural resources and as we keep growing, we want to make sure we can do everything to protect that.

"I want to thank Palmetto Plains for now being a part of Team South Carolina," Evette continued. "We appreciate what you are doing here and we are excited for what you will continue to do for our state."

South Carolina’s solar farms now produce more than 880 megawatts of power, which is enough to serve about 100,000 homes a year.

Cypress Creek alone has developed 375 megawatts across 22 projects in South Carolina, making the company a leading developer of utility-scale solar in the state.

About ten solar farms have been announced in Orangeburg County over the past three years, which is the most in the state.

Just recently, the county approved incentives for two solar farms that plan to locate on about 750 acres of county land and produce 75 megawatts of power. Each is expected to make a minimum investment of $82 million.

Overall, the county’s solar farm developers have promised to invest a $503.5 million and provide 460 megawatts of power.

COLUMBIA -- Pine Gate Renewables is coming to Clarendon County with the commencement of Bonefish Solar LLC.

G7 price cap on Russian oil kicks in, Russia will only sell at market price