'I am going to be out on the street'; Residents of mobile home park say little notice of evictions
0 comments
Share this
{{featured_button_text}}
1 of 2 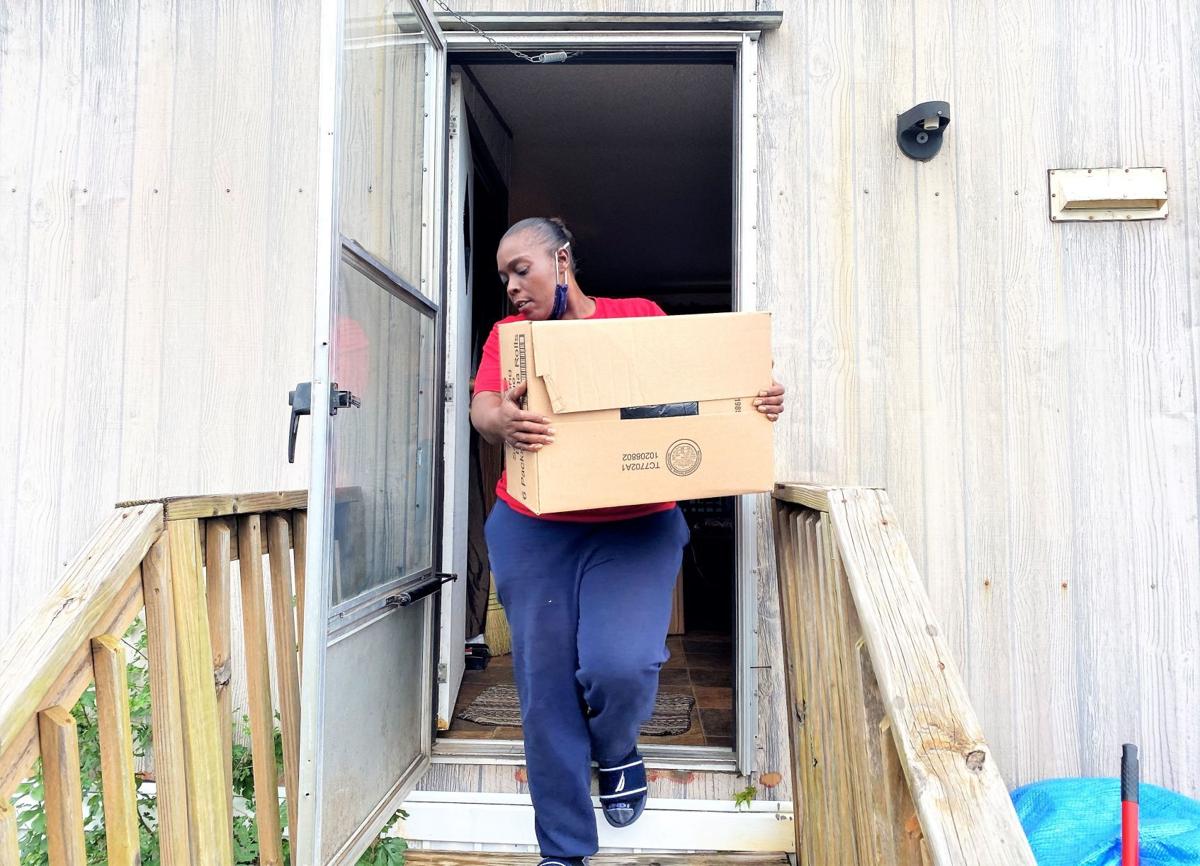 Crepe Myrtle Village resident Nakesha Jamison carries a box of her belongings out of her mobile home as she was told she had to be off the property by Friday. Jamison is one of nearly two dozen residents of the mobile home park in the process of being displaced after the land the park is on was sold. The mobile home park will need to up updated in order to meet City of Orangeburg ordinances. 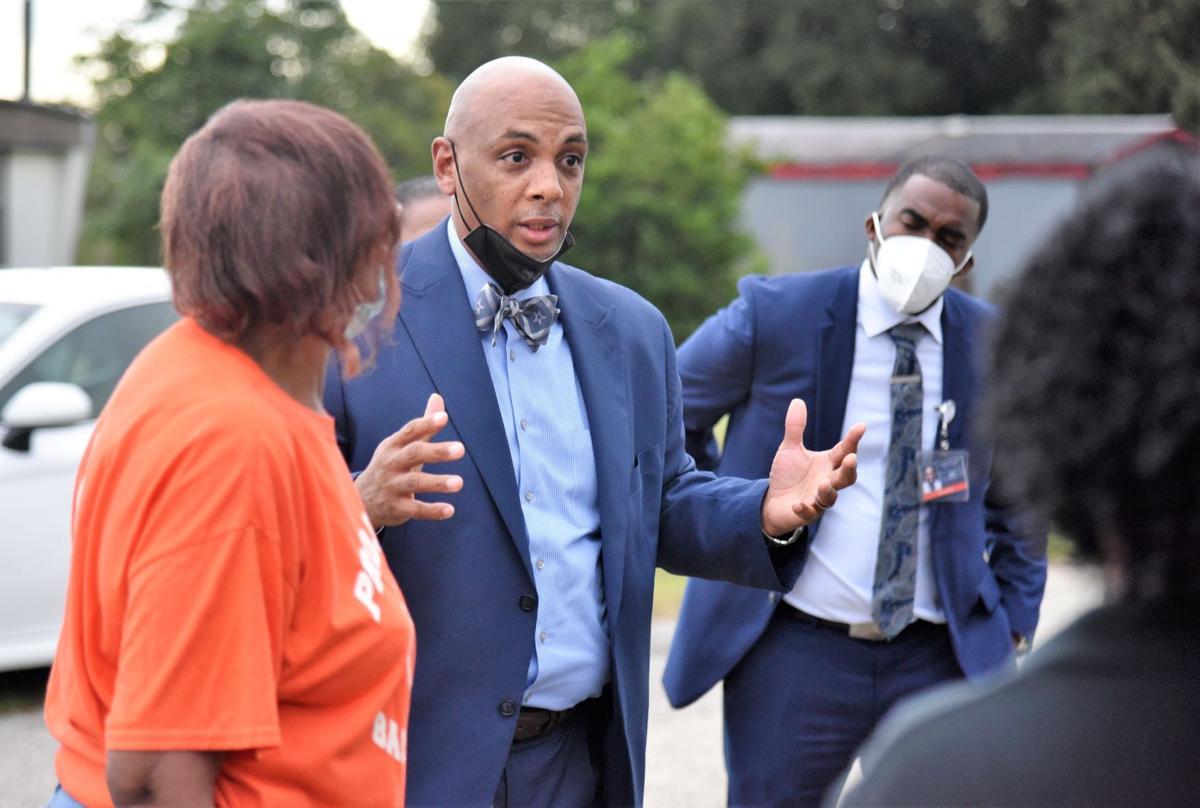 "I will be on the street," Crepe Myrtle Village resident Christopher Fogle said. "They are forcing us off the property. I don't have anywhere to go."

Fogle says he is going to lose his home "because I ain't got any money to move."

Fogle is not the only one impacted by change. Park residents say there were 22 families displaced as a result of the decision to sell the property.

"You have people here who have no money," said resident Fatima Miles, whose family has lived on the land about 20 years. "We don't know where to go?"

Miles says she has been spending nights with her sister and in motels but says she currently works on various jobs and the income is not steady.

Dorothy Pauling has lived in her home for the past year.

"I am going to be in the street too," Pauling said. "I just hate to lose my home."

The Crabapple Lane resident says she received a letter in June informing her that she had to plan to fix the place or leave.

"The next thing we know, she is putting us off the land," Pauling said.

In the process of purchasing the mobile home park, the new owners were informed around December and January that the property had to be brought up to meet city ordinances as it was in violation of several.

The mobile home park had been grandfathered into the city and was allowed to remain except upon the sale of the property. The protections provided by the city ordinance as a result ended with the property's sale.

“When my clients began the process of purchasing this property, they did so without the intent to ask any of the current residents to leave," Hutto said. "We are extremely sympathetic that people do not want to move their homes from somewhere they’ve been for years."

"This was not a decision that my clients made lightly, and it certainly was not motivated by any animus towards current tenants," Hutto said. "In fact, the current tenants are welcome to move back to the property after repairs and renovations are completed.”

Under the City of Orangeburg's manufactured home park ordinance, Colonial Holding Group must repair electrical, plumbing, spacing and paving issues to meet minimum safety standards. For example, homes must be adequately spaced to protect from the spread of house fires.

"After meeting with surveyors and contactors, my clients were informed that the only way to perform the necessary repairs would be to, at some point, have the park completely vacant so that the park could be brought up to code," Hutto said. "As a result, they sent and delivered a letter in early July stating that the leases would not be renewed going forward."

Hutto said legally this requires at least 30 days of notice by either party, which he says his clients gave.

Hutto said as part of the letter, Colonial made various offers to current tenants including financial assistance if they wanted to move to one of the other parks in Orangeburg owned by the same company.

A reminder of the ongoing evictions as well as the offer of financial assistance was extended for a final time in August, Hutto said.

"After this notice was given and after the expiration of the term of the lease, an eviction was filed in August for the remaining homes," Hutto said. "Anyone that wanted a hearing on the eviction could request one."

He said a majority of tenants did request a hearing, and those proceedings began in September and are still being held for some tenants in October.

"In a majority of cases, my clients extended an offer for the tenant to stay an additional two to three weeks after the date of the eviction hearing to allow additional time for them to make arrangements to move," Hutto said.

As for the City of Orangeburg, spokeswoman Jennifer Van Cleave said the "city is working with residents to assist in a resolution."

Specifics on how the city will work with the residents were not provided.

"The new owners are required to meet the standards of the new ordinance. The residents are not being evicted as a result of the ordinance," she said.

"I suggest that you contact the new owners and discuss the reasons behind the eviction," Van Cleave said.

The American Civil Liberties Union has been called to intervene. The organization has asked for an extension for the residents to be able to find a place to move to and stay.

ACLU Criminal Justice Advocate Anwar Young Sr. said he has been in contact with Hutto about the matter is awaiting a response.

"I understand they want to try to develop the land up and make it more safer, but to make things more safe, they have to have a safe way off the land," Young said.

Hutto said options are being looked into further to determine what if anything can be done.

Young said there is a lot of advocacy groups for apartment and home rentals but not much when it comes to trailer parks.

"This is our first time," Young said, when asked if the ACLU has ever gotten involved in such a case. "It seems like the pandemic brings forth new issues."

"I hate this happened but a situation like this makes people aware of how important your rights are as a land renter," Young continued. "There needs to be better communication and that steps are put in place so situations like this don't happen."

Young said many of the residents at the mobile home park are not being obstinate about staying, but due to financial situations, they cannot afford to move to another place.

Young said the money offered was "not enough to cover costs." He said some were offered about $500. The average cost to move a mobile home is at a minimum of $5,000, according to real estate officials.

Young said the ACLU is looking to see if there are any federal COVID relief monies that can be used to help the residents.

In the interim, resident Nakesha Jamison was packing her belongings because she was told she had to be out of the house by Friday.

Jamison says she wishes residents had been more clearly told about what the implications of the land's sale would be for residents.

"If you had intentions of selling the property, we could have been saving up for when it happened," Jamison said.

Jamison, who has lived at the trailer park for 11 years, does not know what she will do going forward. She does have family to stay with, but "I don't want to jump on nobody's livelihood like that."

Jamison said colleagues at Husqvarna, where she works, have given her some monetary help during this time.

Resident Ann Cole has a 23-year-old disabled son. She is the primary caregiver.

"They gave us until the week of Nov. 1 to be out," Cole said. "We have a place to go. We are going to another trailer park similar to this one."

Resident George Frazier has lived in Crepe Myrtle for the past 10 years. He had until Oct. 11 to get out of his residence.

Frazier said he will stay with his nephew in the short term until he can find another place to live.

"I can't move the trailer because it costs too much," he said. "It is terrible."

The situation of the residents was also brought to the attention Orangeburg County School District Superintendent Dr. Shawn Foster as well as school board trustee Mary Ulmer and OCSD Director of Student Services Heyward Jean. All three visited the mobile home park to offer assistance.

Attempts to reach Foster, Ulmer, Keitt and Hannah were unsuccessful.

COMMENTARY: A call to serve in Orangeburg County

Our compliments to those who are dedicated and sacrificing their time and talents to help the youth of Orangeburg and surrounding areas. Your …

Crepe Myrtle Village resident Nakesha Jamison carries a box of her belongings out of her mobile home as she was told she had to be off the property by Friday. Jamison is one of nearly two dozen residents of the mobile home park in the process of being displaced after the land the park is on was sold. The mobile home park will need to up updated in order to meet City of Orangeburg ordinances.