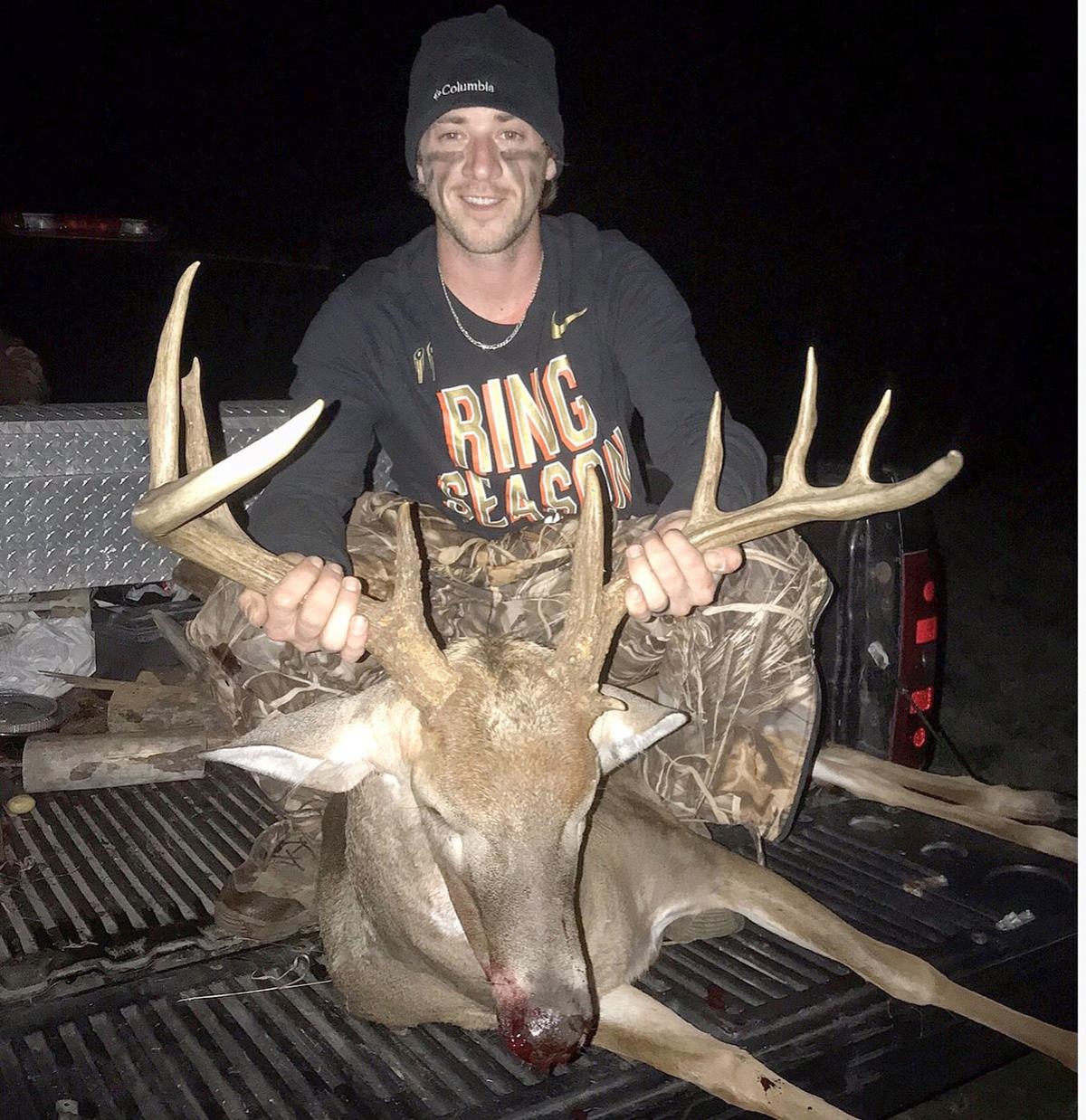 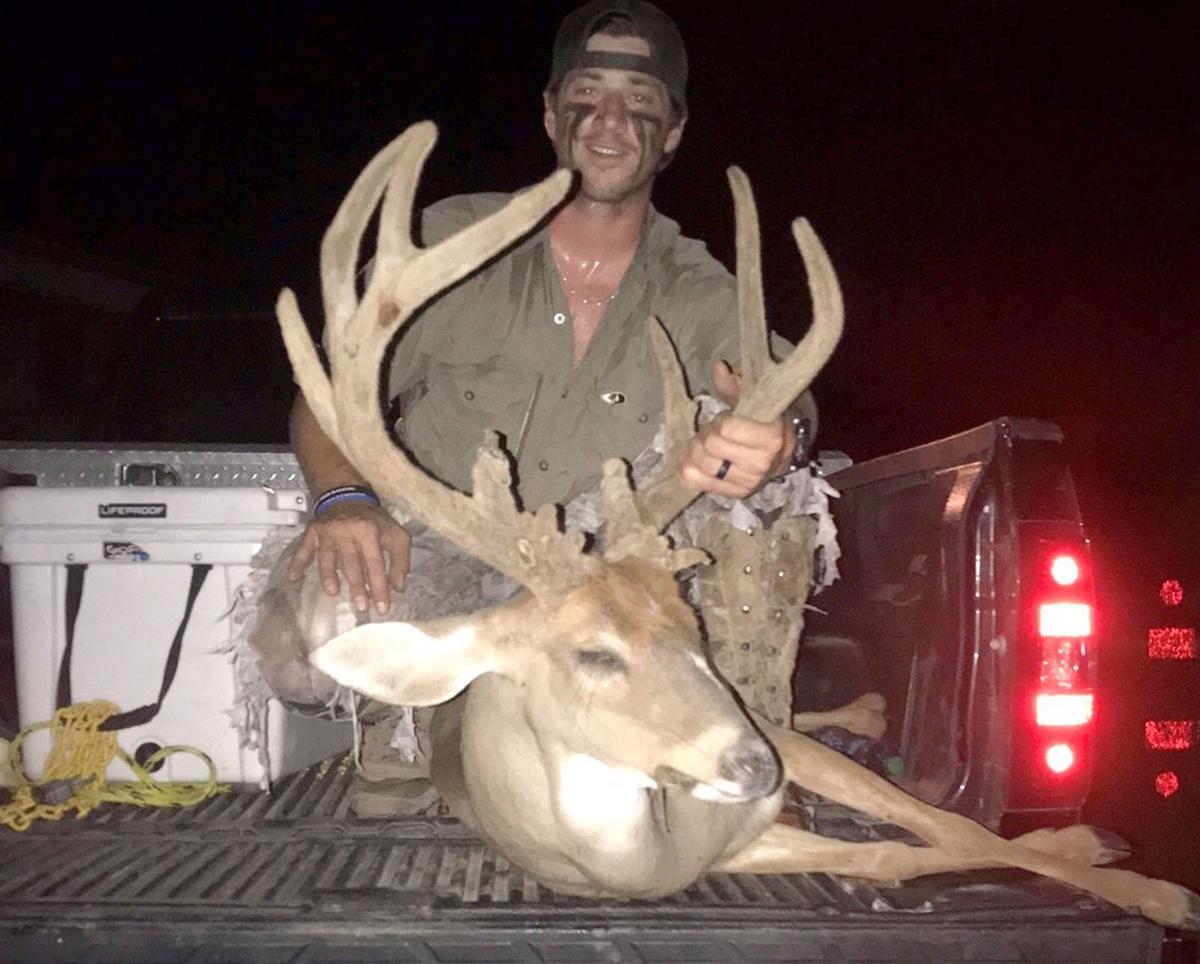 Andy Till with One-Eye Jack, the trophy deer he took in Orangeburg County on the third day of the 2019 season.

Andy Till of Orangeburg got the deer of his dreams on the third day of the 2019 season. And the season got even better.

Till thought One-Eyed Jack might be gone for good -- until the third day of the 2019 season.

He harvested the biggest buck of his life on Aug. 17 on private land in Orangeburg County. The 12-point weighed 173 pounds with a 19 1/2-inch spread. His unofficial green score is 153.

The deer was familiar to Till. He had named it One-Eyed Jack after tracking the buck on trail cameras for some time. One of the buck’s eyes never reflected light in any of the photos, thus the name One-Eye Jack.

Till actually missed the deer twice during the 2018 season, determining afterward that his scope was off.

"I missed him last year, but I was hoping this was the season of redemption," Till told The T&D. "After dreaming about One-Eyed Jack all off-season and then finally getting him on camera two weeks before the season, I knew I had a chance of at least getting a look at him again this year. I just didn’t know it would come on the third day of the season."

Till explained how the hunt went down.

"It’s that time of year where bucks roam with other bucks in bachelor groups, so I knew if I saw one buck, I could see a few. That night I was hunting in the same stand for the third consecutive day, which was also the stand I missed him in last year," Till said. "Some hunters don’t believe in repetitive sitting like that, but I do. You gotta play your chances. He may not walk out today, but he could over the course of the next three to four.

"I had one buck come out in a pack of five that I really wanted to take, but he wouldn’t turn broadside. While waiting for him to turn and me to control my heart rate, another buck stepped into view -- a small 6-point. I lifted my eyes off the scope to see what else could be following and old One-Eyes Jack was right behind him.

"Being the dominant buck, he quickly made headroom on the corn pile with the other bucks giving him his respected space. I watched him for about a minute until I could control all of my vitals enough to squeeze off a good shot. When the dust settled and the smoke cleared, there he was now laying where he previously stood."

Till shot the buck with a Browning .270 with a 130-grain Winchester bullet from from 125 yards away.

“I hit him a little bit low in the kill zone on the first shot. My dad killed a really big deer years ago, and his first shot didn’t faze it. I was worried about that happening here, so when this one started moving around, I decided to put another shot in him,” Till told Carolina Sportsman.

Till had thought One-Eye Jack might no longer be around.

“We did some logging on the property from February to June, and I thought it might run him off for good. But luckily he came back. I hunted that same stand the first two days of this season and didn’t see much of anything. But on the third day, old One-Eyed Jack finally slipped up,” he said.

Till told Carolina Sportsman that when he took a close look at the deer, he realized it had both of its eyes, but one was scarred over.

“I’m not sure he could see out of that eye. It was like it had been injured while fighting another buck or something. It had this scar tissue kind of covering the eyeball,” he said.

"I still can’t quite believe I actually got him," Till told The T&D. "I was hoping he’d be my first record book entry but the velvet would have to be scraped off for an official score and I think I kind of like him the way he is. As much fun as the harvest is, it’s the hunt you fall in love with. It’s a bittersweet feeling when I go to the tree stand now knowing One-Eyed Jack won’t be out there for me to hunt anymore."

"There are thousands of deer in this state, but when the 2019 season began, I only had two bucks on my mind, One-Eyed Jack and Captain Hook. The Good Lord sent me Jack on the third day of the season (still can’t believe that!) and he sent me Captain Hook last night (Nov. 3)!

"My wife and I bought 11 acres five years ago and finally saved up enough to build on it more recently. Got a little woods on it, so naturally I started baiting and watching.

"This past summer, one of the biggest deer I’ve ever caught on cam started frequenting the food plot about 300 yards off our back porch. As the months went by, I was surprised to see him hanging around.

"I haven’t had any daytime pictures of him since summertime but last night I reluctantly decided to ease up the deer stand in the back yard. It’s a field stand and I just hate hunting fields this time of year.

"Hadn’t seen anything all afternoon and was getting a bit discouraged to be honest,but right about 5:35 p.m.,he popped out just as broadside as can be. I had to watch him for a few minutes because a doe was standing dead between us. But when she moved just enough to clear my view, I took the shot.

"He took off like a bat out of hell, so wasn’t sure about the shot. I felt good about it, but the deer wasn’t down, so I was nervous! Got my buddy and we started looking. After some time in the woods,we found Captain Hook at the end of a 150-yard blood trail. What a freaking animal!

"Captain Hook got his name from the kicker off the back of his right side G2 which looked every bit of a fish hook, that is until he broke it off about two weeks ago."

Deer hunting has begun in The T&D Region for 2020.

Andy Till with One-Eye Jack, the trophy deer he took in Orangeburg County on the third day of the 2019 season.