Both candidates have filed for the Orangeburg County Council District 4 seat.

The state’s party primaries will be held June 9.

Garvin is retired and the owner of Garvin’s Community Store in Springfield.

“I’m seeking the seat because I want to have the opportunity to give back to my community, and I know that I have the capability of giving my constituents 100%, unbiased representation as the councilman of District 4,” Garvin said.

“I would like to see quality growth in the west end of the county, which has been long overdue. And I will be able to work professionally. I will work in a professional way in order to make decisions based on the need of the community,” Garvin said.

“I do have the ability to represent those in my district in a fair and ethical manner,” Garvin stated.

He said, “I feel like I’m the best candidate because I have new ideas, and I want to see quality growth in the western end. We have an industrial park that we have in Neeses that has been there for about 15 years, and there’s nothing out there. I haven’t talked to our councilman about it, but I think that it was not planned properly to make sure that the community money was spent in a manner that it should have been spent,” Garvin said.

He detailed the goals he would like to accomplish if elected.

“My first goal would be to make sure I have a quarterly meeting with the Norway mayor, Springfield mayor, Neeses mayor, North mayor and Woodford mayor, and the representatives in the Great Branch area. All the people that’s in the community, I would meet with them to find out what their priorities are in their community. And then, when I find out what their priorities are, I would take those priorities and would work through them. We’ll work through all of them to make sure that we don’t forget about anybody in the community,” Garvin said.

He said, “I would be more vocal and more visible in the community. I would also make sure that all of the mayors in each town that I would be representing in District 4, make sure they have a fair shot at everything.”

Garvin assessed the work of the current council.

“I can only speak for District 4. I think that the county councilman, he has not been vocal enough, he’s not worked hard enough to make things come to our area. All of the little small towns like North, Norway, Springfield, Neeses, they’re dying out, and our children who are graduating from all the schools in this area in District 4, they don’t have any jobs. And it seems like to me that everything is way on the other side of Orangeburg,” Garvin said.

He noted that he served as a board member on the Orangeburg Consolidated School District 3 school board for over 20 years and as a member of the School Development Committee for the county.

Livingston stated that he seeking re-election to complete unfinished tasks.

“I’ve got some projects that I didn’t get through with on this last term. In fact, we’re working on one in Springfield now, the senior citizen center. We’re remodeling that building and we’ve got the roof on, but we didn’t quite get through with it, so I would like to have one more term to finish it up. I’ve got about three projects in Norway that we didn’t get started on last year, so I want to get those through,” Livingston said.

“I’ve got more work that needs to be done,” he said.

Livingston’s been self-employed most of his life.

“I’ve farmed, for about 20 years I was co-owner of North-South Wood Preservers and just a pretty good business mind. You’ve got to know how to handle your own money before you can handle somebody else’s money,” Livingston stated.

If re-elected, Livingston said “I would like to finish my projects up.

“It’s a lot of work to be done in Orangeburg County, and I would like an opportunity to finish it up and get through all of the loose ends,” he said.

Livingston believes he is the best candidate.

He is particularly proud of one accomplishment during his tenure.

“Probably the best thing not only to me but all seven of us, when we got together and we voted to pass the capital projects sales tax. That was millions and millions of dollars that went into Orangeburg County infrastructure that we wouldn’t have had if it weren’t for that 1 percent capital sales tax,” he said

“Every town, every community got something out of it,” Livingston said.

Livingston noted that he is involved in the community groups of the towns in District 4. 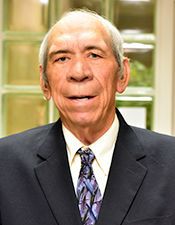