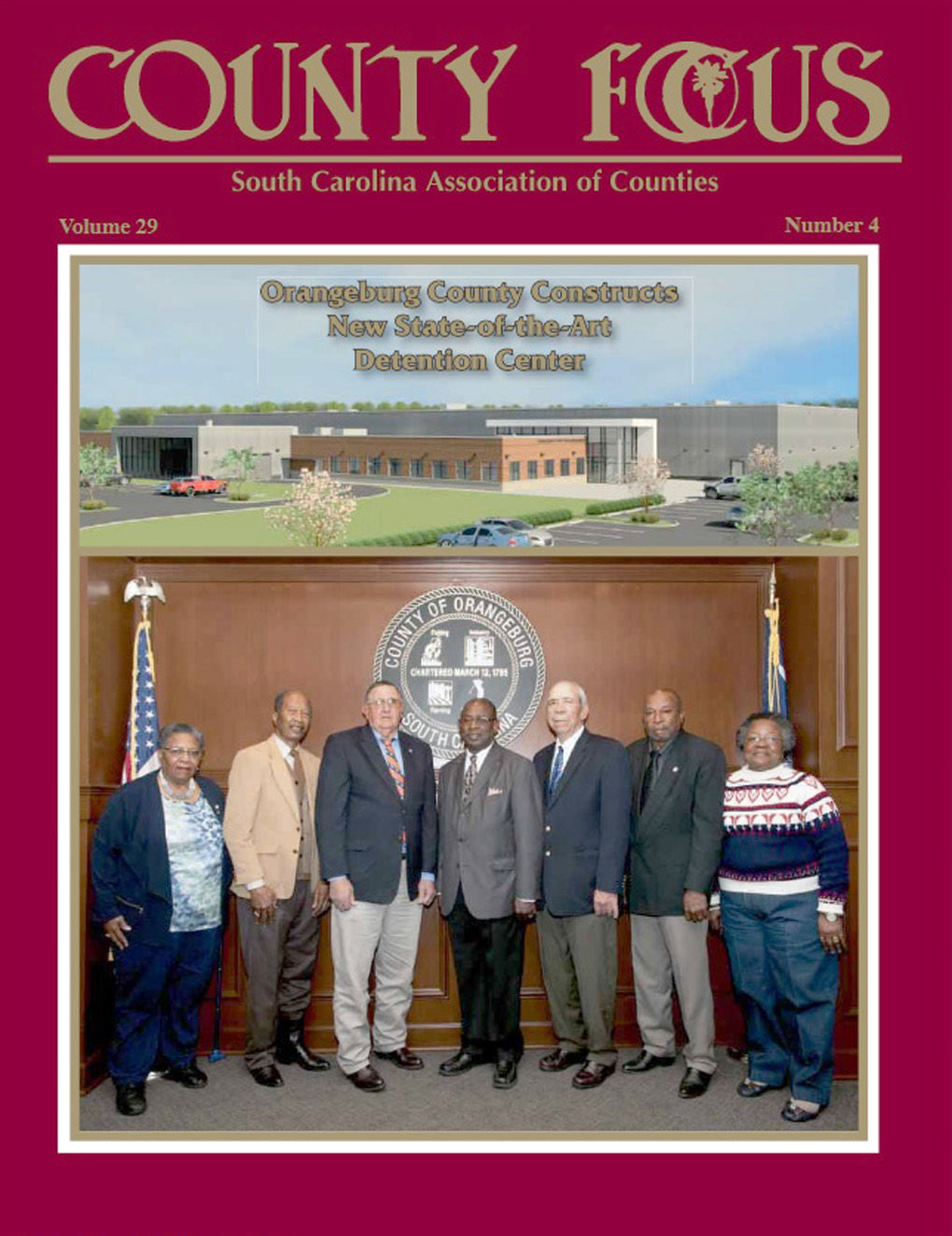 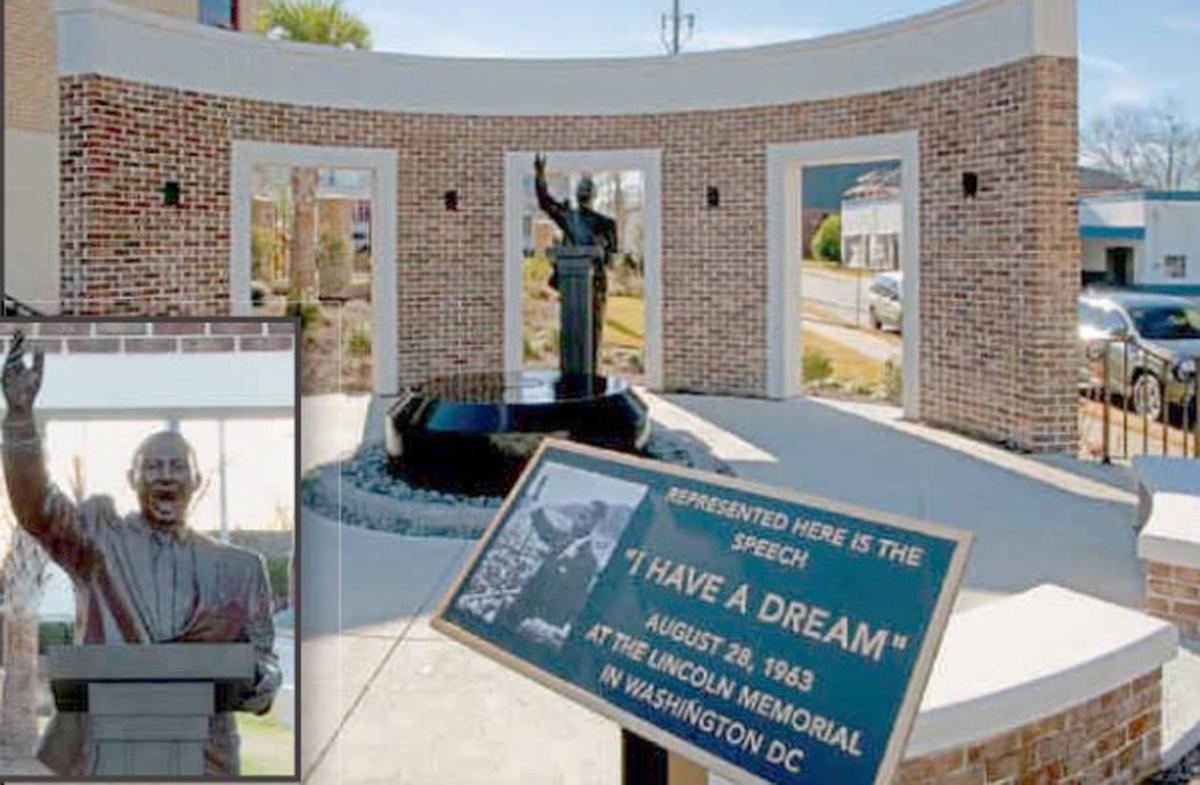 Dr. Martin Luther King Jr. Plaza at the Orangeburg County Courthouse features a statue of the King, inset-left. Inscribed across the top of the memorial is one of his quotes, “Injustice anywhere is a threat to justice everywhere." The memorial and other county projects are featured in County Focus, a publication of the S.C. Association of Counties.

Dr. Martin Luther King Jr. Plaza at the Orangeburg County Courthouse features a statue of the King, inset-left. Inscribed across the top of the memorial is one of his quotes, “Injustice anywhere is a threat to justice everywhere." The memorial and other county projects are featured in County Focus, a publication of the S.C. Association of Counties.

The South Carolina Association of Counties publishes a quarterly magazine about the most notable undertakings in the state’s 46 counties.

Readers of the March 2019 edition will be forgiven if they believe just about everything notable in the state is going on in Orangeburg County. The cover and nearly the first third of the magazine are devoted to editor W. Stuart Morgan III’s reports on three projects here.

The cover features an image of the members of Orangeburg County Council and an artist’s rendering of the new detention center slated for completion in 2020.

From there, readers move inside to full feature stories with photos on:

Timothy Winslow, executive director-elect of the S.C. Association of Counties said, “Orangeburg is the cover story because many counties are interested in doing similar projects.”

“Part of our mission is to show people the exciting things that are happening in the counties in this state. Orangeburg County is doing some exciting stuff," Winslow said.

Winslow said other counties have shown interest in the work that Orangeburg County has done.

“Imitation is flattery, and I can certainly see why counties might imitate how Orangeburg County built their various facilities,” he said.

“It’s a big deal. I think that it shows the growth and the things that we have going on in our county,” Wright said.

“It shows that we are progressing. A lot of our citizens really don’t know what’s going on or see some of the plus that’s going on around them. I think Orangeburg County is really growing, and I think that the staff and the administration and all of the other agencies in the county are working together to really showcase the county,” Wright said.

“I hope the citizens of Orangeburg County can appreciate what’s being done from the top down to move Orangeburg into another level, and making it a better place for us to live, and work and play,” he said.

“I think it’s an honor for us to have been recognized,” Wright said.

Following are excerpts from Morgan’s reporting on each project:

Orangeburg County is scheduled to complete a new state-of-the-art $26 million detention center by April 2020. The 85,000-square-foot facility, under construction since March 2018, is being built on county-owned land adjacent to the old detention center near the sheriff’s department on Ellis Avenue in Orangeburg.

“The new detention facility will be able to house more than 300 inmates, and it’s designed to prevent inmate escapes like the one that occurred last May at our old detention center,” said Harold Young, Orangeburg County administrator. “Because the detention center is designed to help reduce contact with inmates and includes new technology, the facility will provide a better, safer work environment for officers and help ensure the safety of citizens as well as inmates."

“The county’s previous detention center, designed and constructed 50 years ago, is outdated and incapable of complying with requirements of the Prison Rape Elimination Act (PREA) of 2003. So, Orangeburg County has had to pay for other facilities to help house inmates for many years.

The old facility, built before the Americans With Disabilities Act (ADA) of 1990, is also non-ADA compliant.

Orangeburg County has finally constructed something that it has never had before — a public services building. The county’s Public Services Department is responsible for maintaining all county roads and bridges, solid waste disposal, recycling, solid waste collection sites, street signs and the county’s entire fleet of vehicles.

“The building our Public Services department previously used was 30-plus years old and far exceeded its useful life,” said Harold Young, Orangeburg County administrator. “In today’s world, vehicles are more computerized, and a successful vehicle maintenance program requires a lot of technology and space to be successful. Our new building will allow us to see major savings when maintaining our county’s vehicle fleet, and allow citizens to meet public services staff to discuss roads and bridges issues, and in a more suitable environment."

Orangeburg County launched a project in February 2017 to address parking, drainage and access issues in front of the county courthouse and between the courthouse and in the county administration building. The project also addressed security issues.

But when the project was in its design phase, Orangeburg County Council members and the county’s administrator recognized an opportunity to incorporate the construction of memorial plazas honoring the late Dr. Martin Luther King Jr. and veterans of the U.S. Armed Forces.

As the two plazas were under construction, they next decided to renovate and update county council chambers that had not been altered since the administration building was completed in the late 1980s.

“This multi-phase project was understandably ambitious,” admitted Johnny Wright Sr., Orangeburg County Council chairman. “But the project has redefined and repositioned our county’s facilities in a way that has never been done before — whether for lack of political will, funding or focus.

“The vision for creating a government campus of sorts,” Wright added, has been three years in the making and prompted by, among other reasons, the need to provide a better and more modern workspace for county government and its employees. It started with the understanding that our buildings belong to the people, who, when they see them, should be proud of how their tax money was used.

Richard Hall, Orangeburg County planning/development director, said he is very excited about the completion of both memorial plazas.

The Dr. Martin Luther King Jr. Plaza is located adjacent to the courthouse.

The Veterans Plaza is located across Amelia Street in front of the county administration building.

The newly renovated and updated council chambers enhances Orangeburg County’s ability to host public meetings. Soon, it will also allow the county the ability to stream meetings in real time.

Orangeburg County may be getting a more modern mission statement.

ENTRIES CLOSE MONDAY: Win up to $1,000 when you enter the 2018 Destinations Photo Contest!