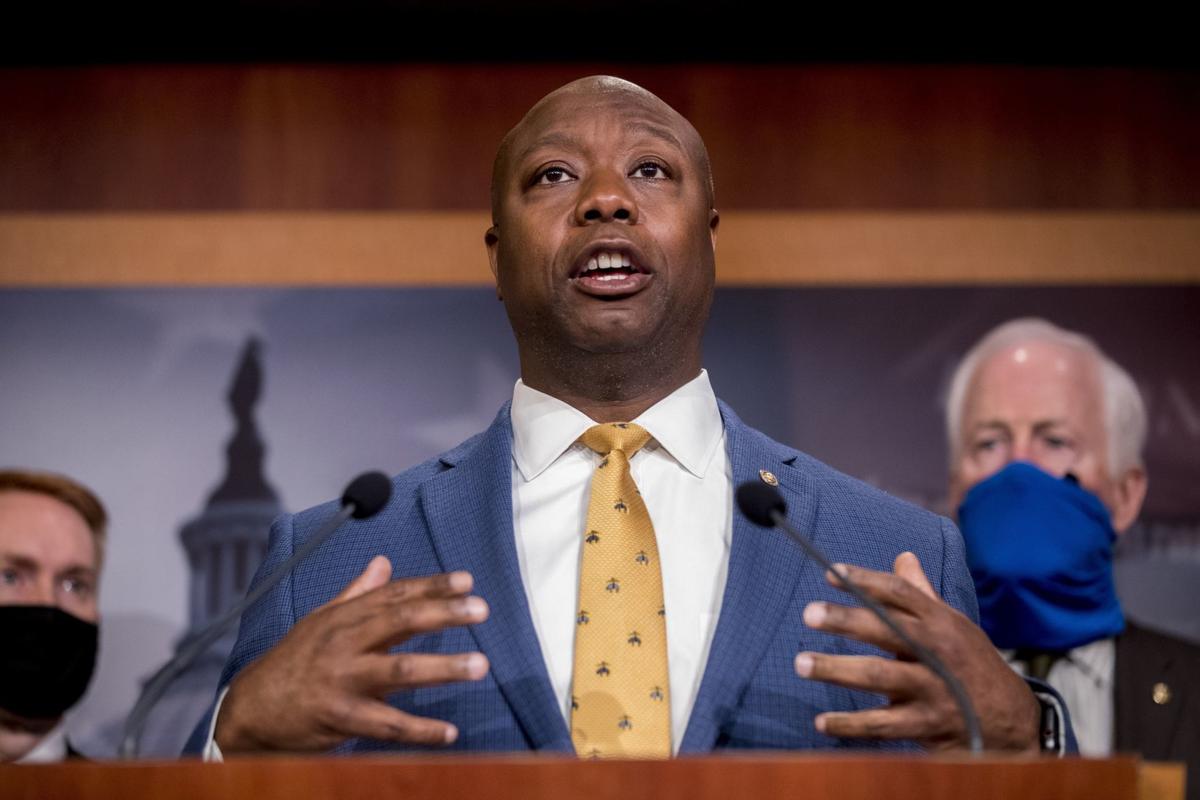 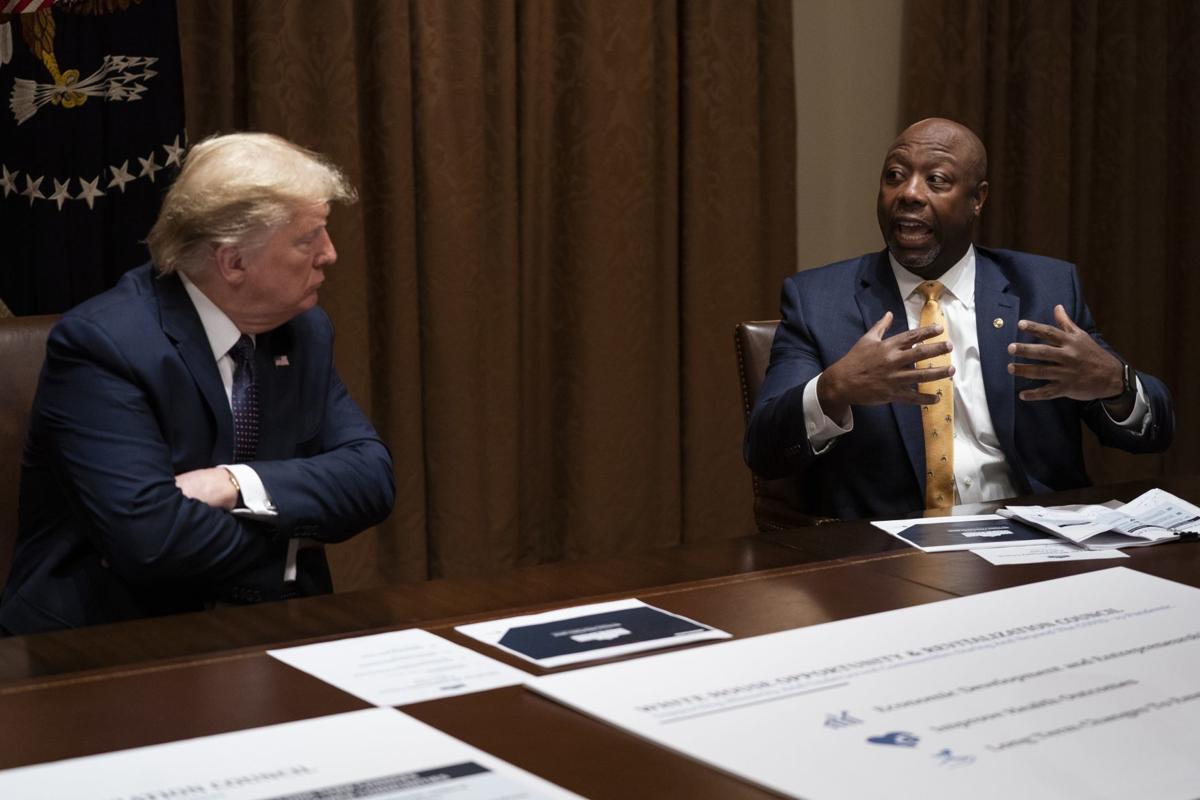 WASHINGTON — When he first ran for office in 1994, they scrawled the N-word on his lawn signs. By the time he came to Congress, he had to unplug the phone lines because callers brought the staff to tears. Even after he became a U.S. senator, the Capitol quickly became just another place where he would be stopped by the police.

Initially reluctant to focus on race, Sen. Tim Scott of South Carolina is now a leading Republican voice, teaching his party what it's like to be a Black man in America when the police lights are flashing in the rear-view mirror.

He has been pulled over by law enforcement "more than 18 times," Scott said in an interview with The Associated Press.

"I'm thinking to myself how blessed and lucky I am to have 18 different encounters and to have walked away from each encounter."

As the only Black Republican in the Senate, Scott's role is heavy with a certain weight. He led the task force of GOP senators drafting the Justice Act, a package of law enforcement changes. In the role, he has had a historic opportunity to speak to Republicans about race — as a conservative, a Christian and a Southerner from the state where the Civil War began.

He rejects the concept of systemic racism, which puts him at odds with many Black Democrats who demand a broader police overhaul than his proposed bill. Instead, he places his faith where he says he has seen the change, in people's hearts. He shares his experience as a Black American in the 21st century, including this year when he was pulled over for failing to signal early enough for a lane change — or, as he called it, stopped for "driving while Black."

"I just can't imagine the pressure he must be under, though, as the only African American Republican," Rep. Karen Bass, the chairwoman of the Congressional Black Caucus, said in an interview.

"That he has to sit there with those senators and go through his experiences and hope that they have some measure of empathy," said Bass, who is leading Democrats' policing bill and working with Scott, whom she has known for years.

EDITORIAL: Good news to be found even now

As massive demonstrations over the May 25 killing of George Floyd in Minnesota spilled into a worldwide reckoning over police tactics and racial injustice, Scott quietly approached Senate Majority Leader Mitch McConnell at the GOP senators' weekly private luncheon.

Scott whispered in McConnell's ear that he wanted a seat at the table drafting legislation.

"I'm the guy that actually has the experience," he told McConnell. The leader agreed.

Broaching law enforcement changes is a new priority for the GOP, which proudly calls itself the party of Lincoln but has wrestled with race in the modern era, becoming more aligned with the "law and order" approach now embraced by President Donald Trump than a civil rights platform.

Scott's family — the grandfather who picked cotton as a child and grandmother who cleaned homes, and his own parents who separated when he was young, his father in the military, his mother working double shifts as a nursing assistant to provide for him and his brother — taught him to stay steady amid hardship. He acknowledges in his memoir that he almost flunked his freshman year of high school, before going on to become senior class president and attend college.

He is among a generation of Capitol Hill Republicans — along with McCarthy and Sen. Marco Rubio, R-Fla., both of whom he counts as friends — who came of age during the Reagan years, carrying a conservative's belief in the wellspring of opportunity awaiting hard work. Elected to the House on the 2010 Tea Party wave, Scott was tapped for a vacant Senate seat in 2012 and went on to win it outright in 2014.

"He found his political legs and political wings at a unique time in this country," said Antjuan Seawright, a Democratic strategist in South Carolina. "He was able to tap into something that was not known, so he made the unknown known, a Black Republican."

And yet, Scott can speak with authenticity about experiences of racism that transcend party. "I am going to be black for the rest of my life," he writes in his biography.

With the 2014 Missouri death of Michael Brown, and the 2015 South Carolina killing of Walter Scott, no relation, he wrote, "It was becoming harder and harder not to speak out."

What started as a series of Senate speeches about his experiences has led to this defining moment, drafting legislation at a time of history.

"He's been able to diversify the conversation in America about the African American community ... and how we fit into this larger pulse of what we call America," said Stephen Gilchrist, the chairman and CEO of the South Carolina African American Chamber of Commerce. "And yeah, that does draw criticism because, in many respects, it does not toe the line."

If anything, Scott objects not to those in his party learning the toll of racism, but critics from the left who question his policy decisions as a Black man. He publicly spoke out against Trump's 2017 comments of fine people on "both sides" of the neo-Nazi protests in Charlottesville, Virginia, and has since blocked some of the president's judicial nominees over their views. He notes there are only two Black Democratic senators.

During an interview at his Washington office, Scott explained that he believes there's value in having the person who has "gone through the pain and the misery" of bias writing the policing bills that could become law.

"I think it is important that, in the history of eternity, that I had the good fortune of being born in the place where the Civil War started, being elected in the seat that Strom Thurmond used to hold, to be in a position to have this serious conversation that confronts racial outcomes in this nation," he said.

"I think it's a blessing from God."