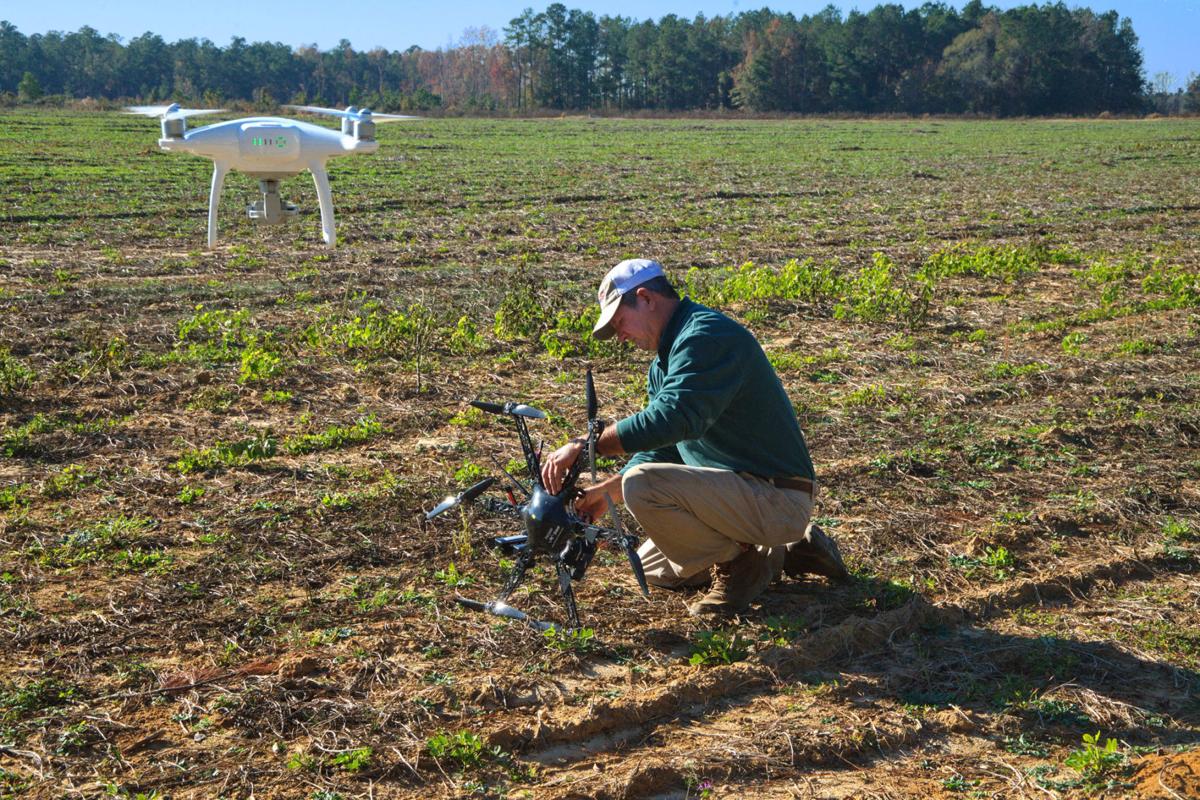 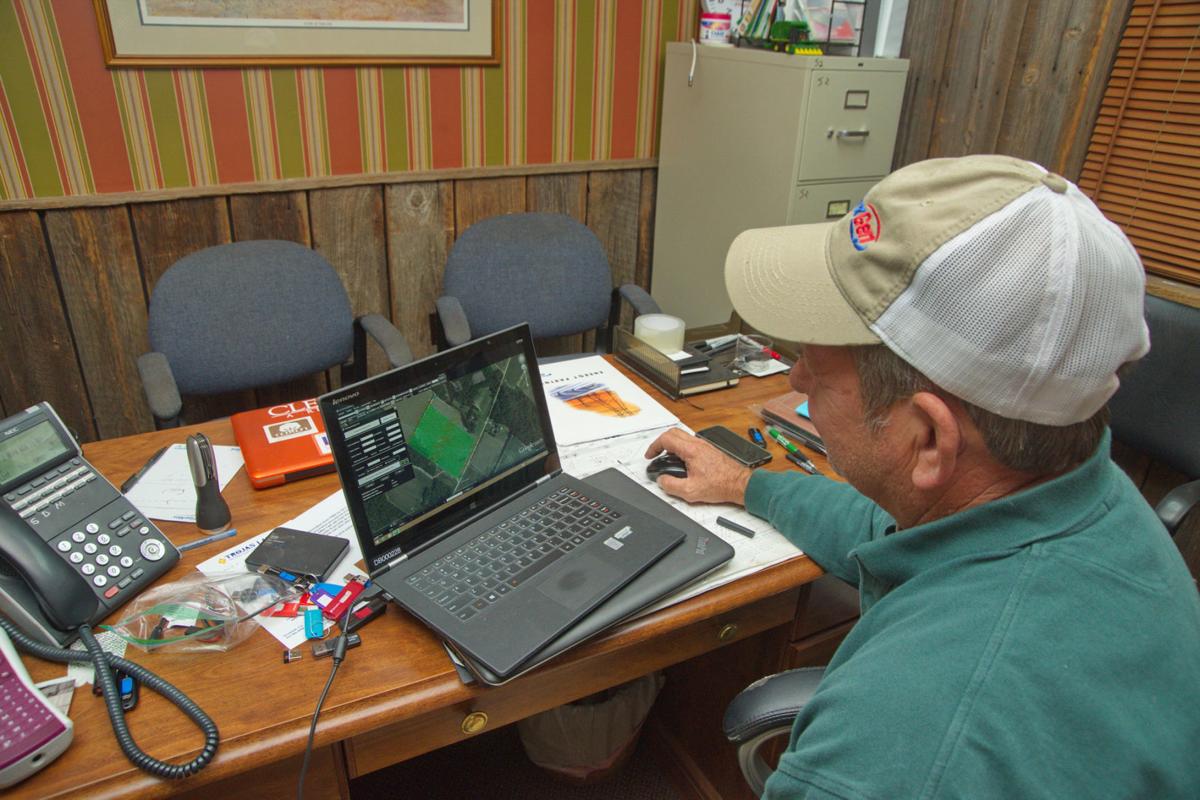 Drake Perrow uses a computer and GPS to guide a drone outfitted with a camera in a grid pattern over a field.

Had you been at that field after the weather cleared, you might have spotted a drone taking photographs. When the photos were downloaded, the farmer could see the washout as plain as day. No heads ruined. The drone saved him time, trouble and money.

In 1996, Drake Perrow formed Crop Companions for his work with cotton, soybeans, corn, wheat and peanuts. Drake’s son, John, who graduated from Clemson in 2014, had seen drones in action and appreciated their ability to gather “field intelligence.”

The Perrows expanded Crop Companions Inc. to a drone consultancy.

“Out of sight; out of mind,” they realized, doesn’t apply to drones’ aerial view of fields.

Aerial views prove strategic. Down Cameron-way, some fields run around 100 acres. It’s impossible for a farmer to see the interior, and farmers can’t walk every row. A drone? It covers a field like a blanket. It can detect a clogged pivot nozzle. Hog damage inside a field? A clogged drainage ditch? See it and deal with it.

Farming’s new toy is no toy; it’s a high-tech recon tool that gives you a bird’s-eye view of your croplands.

Their drone consultancy motto is “On the Ground and in the Air.”

“When farmers see what it brings to the table, it grabs their attention,” Drake said.

Drones can be used to check fence lines, monitor irrigation systems, and assess crop damage from deer, wild hogs and insects. Flying a cornfield, Drake observed about four acres that never got fertilized. Drones make it easier to see how long to dig drainage ditches. John has a photo of a ditch ending just yards short of a low spot where rain collected, drowning crops.

One mission gave Drake a jolt. Photographs revealed a section where his peanuts were dying. Soil tests determined zinc levels were so high they had killed the peanuts. It was too late to take corrective steps, but he was armed with information for the future. And that’s key. Drones’ aerial perspective, cameras and software give farmers a great detection technology.

One drone photographed a square patch where crops struggled. “That’s where a homestead’s old tin roof had long sat,” said Drake. Zinc from the tin’s primer had leached into the soil, adversely affecting crops.

Drones prove very useful. Drake goes to an old church that had some roofing problems but was too steep to climb. No problem. Drake sent his drone up to check it.

The Perrows fly DJI Phantom units and Precision Drones’ Pacemakers, which look so sci-fi it’s as if they’re from Terminator.

The night before a scouting mission, Drake programs his drone to fly 10 mph at an altitude of 400 feet, taking photos every two seconds. GPS coordinates guide the flight over a field with 60 to 65 percent overlap, assuring an accurate montage.

The next day he heads out, provided the winds are calm and it’s clear. Wind interferes with flights, and when the sun slips in and out of clouds, it hinders the camera’s exposure levels.

Altitude can vary depending on the time of year and crop imaged.

FAA regulations dictate a maximum altitude of 400 feet. The drone flies itself but cannot fly beyond the line of sight, another FAA regulation. Dutifully programmed, the drone rises to altitude and captures images that reveal the status of the field and its crop. Once images are downloaded, software stitches them together to create a complete mosaic of the field. Drake then sits down with the farmer and goes over the issues.

One mission’s scouting of a cornfield with two varieties revealed that one type was flourishing while the one next to it was lying over. That variety, a tall thin-stalked corn, couldn’t support the weight of the large ears. This situation wasn’t visible from the perimeter, but thanks to the drone, the farmer took preventive action and saved a quantity of his corn.

In another situation, a farmer suspected wild hogs were raiding his field. Flyovers confirmed the hogs’ path into the field and wallows.

The future of drones

The Midwest’s expansive crop fields see heavy drone use. South Carolina’s fields may be small, but they have big problems. For instance, some fields may have several soil types. Drone “field intelligence” can help farmers get the most from these varied soils.

The future looks good thanks to research. As the drone flies, it’s 34.94 miles from Cameron to Blackville. That’s where Dr. Joe M. Maja works at Clemson University’s Edisto Research and Education Center.

Maja, an engineer, designs and manufactures circuit boards in his lab and writes programs for them. He then uses them in customized drones.

One circuit board works with GPS (accurate within centimeters), one board handles navigation and the third controls cameras.

“Drones make it easier for farmers to scout their farms for stress-related issues,” said Maja, who sees “a huge paradigm shift where future farmers will not work on the farm but use technology to do the work.”

As drone capabilities expand, expect more advantages. Like X-rays, which can reveal unseen factors bearing on a crop’s health.

While at Clemson, John Perrow had a professor who was working with Normalized Difference Vegetation Index imaging, an excellent indicator of crop health. While it’s technical, simply put, NDVI reveals the health status of a crop down each row, across the field, based on how crops reflect and absorb light.

Farmers spend valuable hours scouting perimeters and sometimes walking fields. The farmer who lets a drone become his eyes, however, sees the future, today. The field intelligence gathered by drones will greatly improve his efficiency when it comes to planting, cultivating and harvesting crops.

A battery-powered drone can fly for 12 minutes. Just 12 minutes is all it takes to head off trouble and make the long, hard farming season more efficient and much more productive. It’s the proverbial ounce of prevention that’s worth a pound of cure.

Tom Poland’s article is reprinted with permission from South Carolina Farmer, a magazine published by the S.C. Farm Bureau Federation.

Drake Perrow uses a computer and GPS to guide a drone outfitted with a camera in a grid pattern over a field.