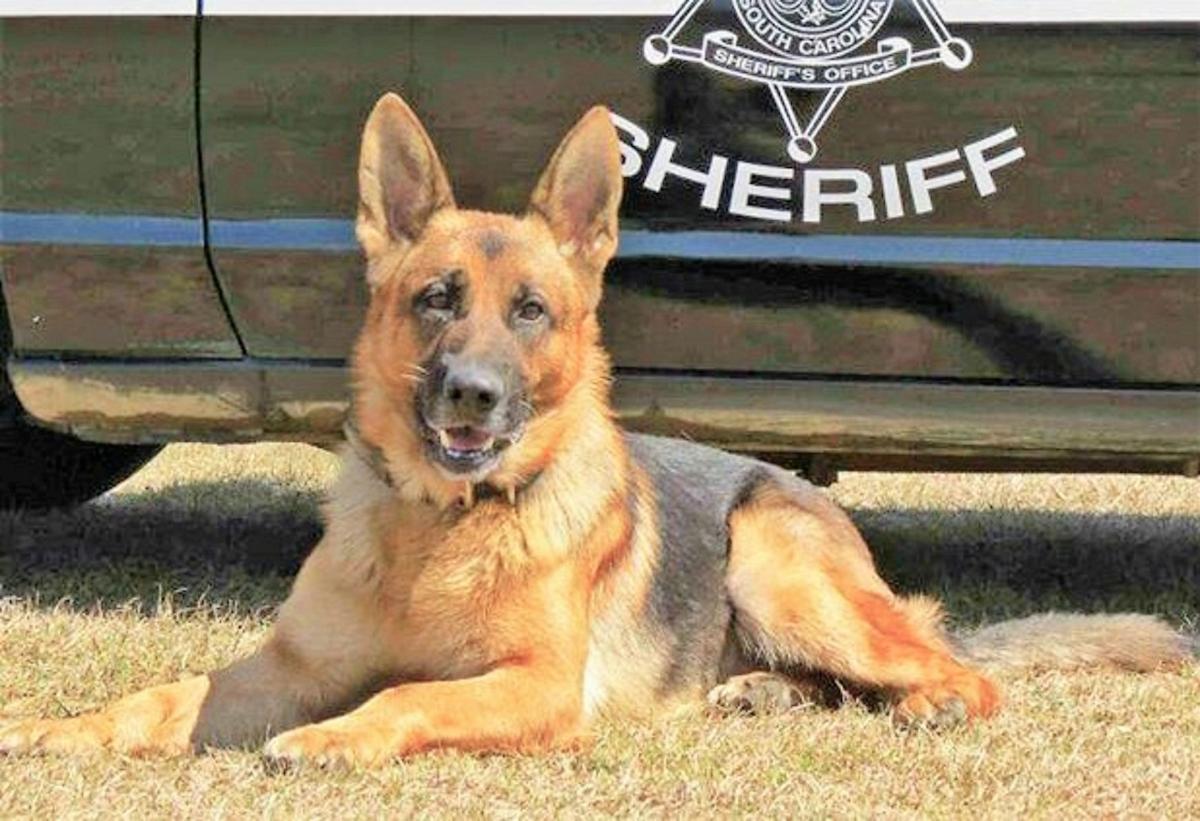 Gomo is a 10-year veteran of Orangeburg County Sheriff's Office. 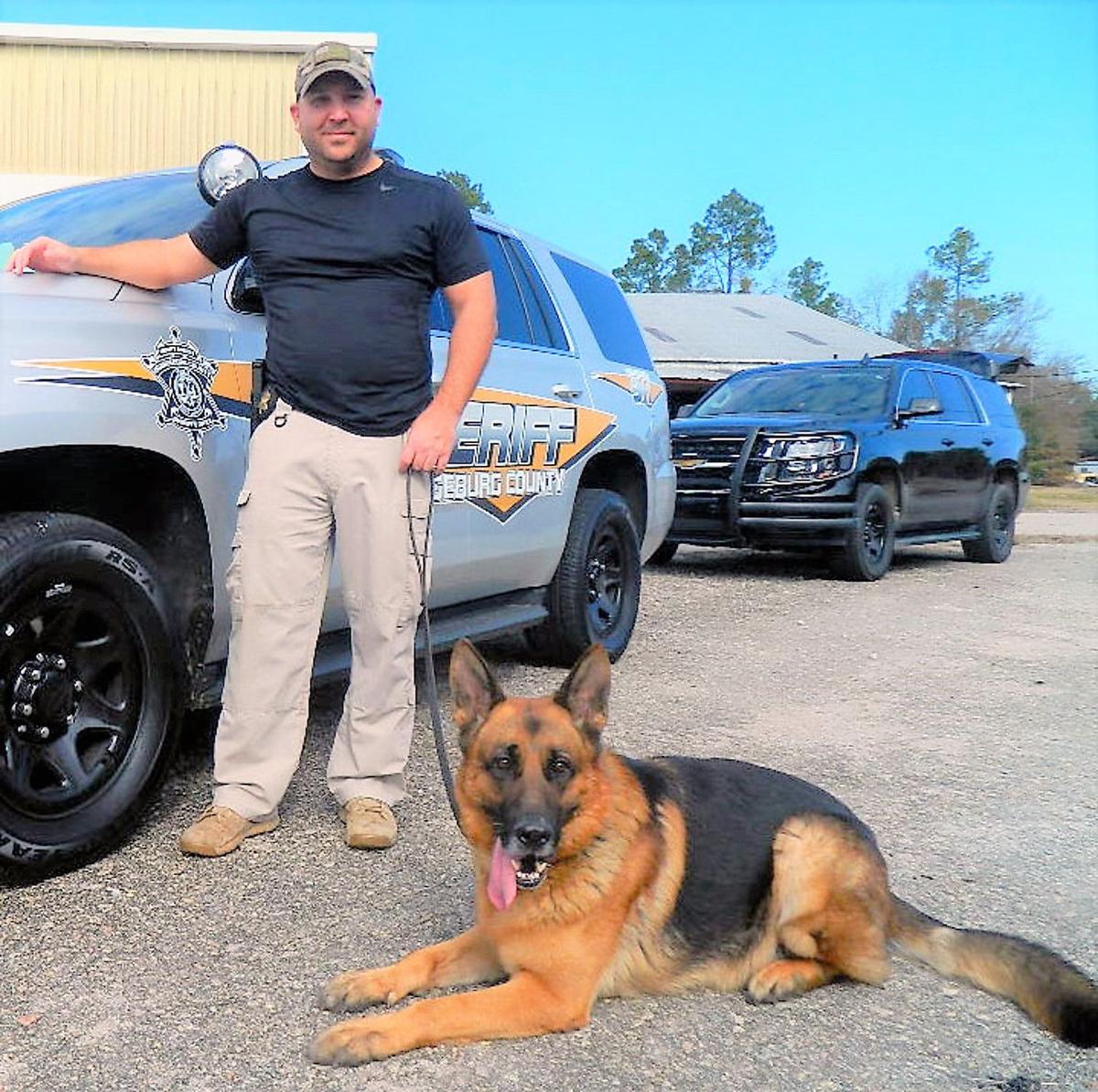 Gomo and handler Sgt. Ryan Harter, both of the Orangeburg County Sheriff’s Office. Gomo is set to retire this month for medical issues. 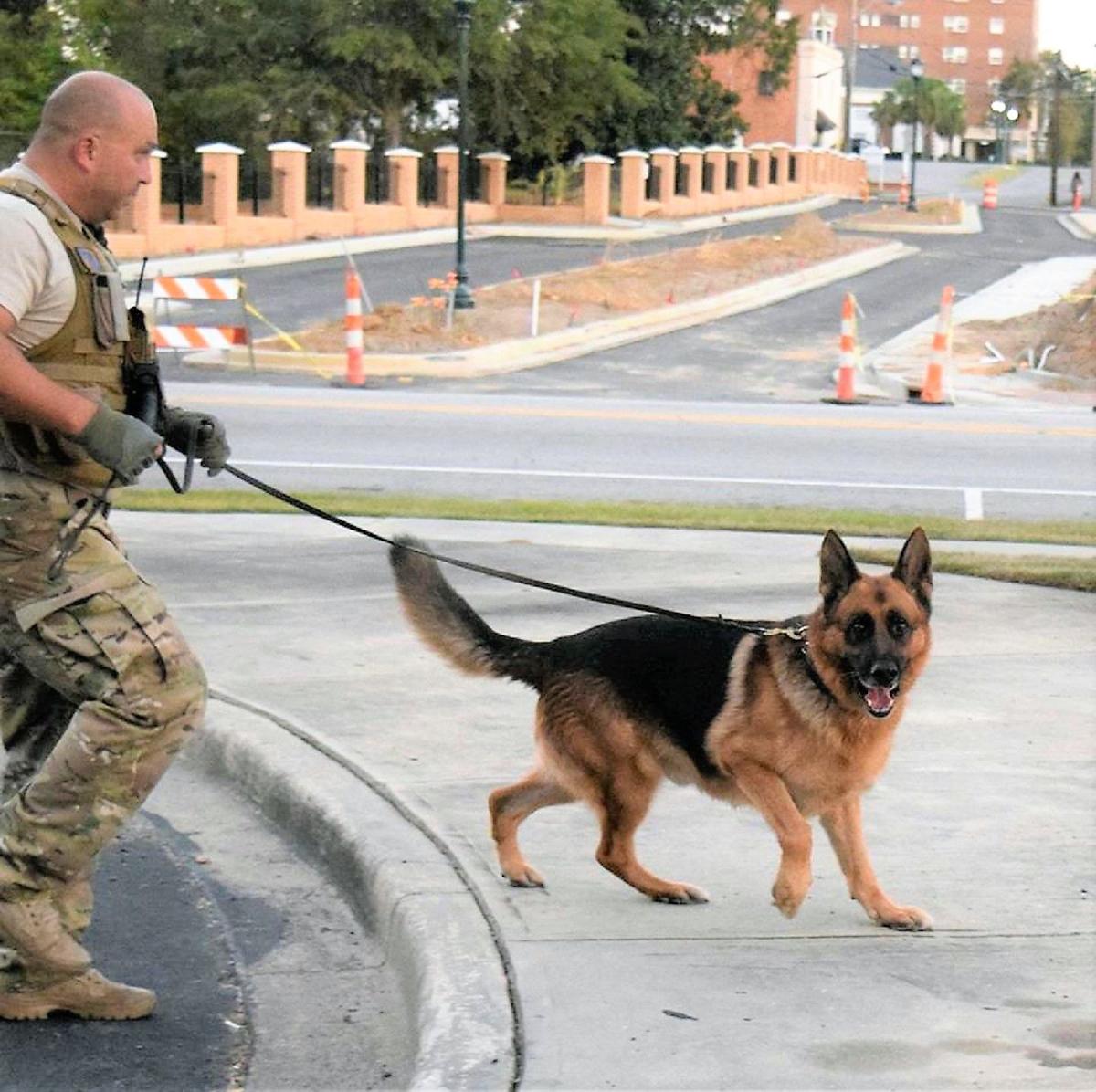 Gomo is shown during a training exercise in Orangeburg.

An officer with the Orangeburg County Sheriff’s Office with law enforcement training in two countries is retiring after a successful career in fugitive searches, seizures, drug busts, school demonstrations and deployments.

This deputy’s given name at birth is “Gomo Von Der Glockenheide,” which translates from German into “Gomo of the bell heath.” After nearly a decade of faithful service, this K9 deputy is about to enjoy retirement.

“How do I feel about his retiring? It's a hard pill to swallow,” handler Sgt. Ryan Harter said. “A handler will literally spend more time taking care of and working with his dog more than any other family member. So the bond and relationship that develops is inevitable and to a great degree, required to be a successful team.”

The German Shepherd originally from and initially trained in the Czech Republic adapted well in America after he arrived with passport in paw in 2012. Upon arrival, he went straight into training, which has to be recertified each year. Gomo excelled in law enforcement-type searches, such as article searches, narcotics and missing persons.

Law enforcement, jail step up protection due to COVID-19

With three weeks left in training, he was paired with his partner, Sgt. Ryan Harter of OCSO, who saw a “beautiful” animal in the K9.

“I was pretty close to certain that he was going to work out just fine within the first few minutes I spent throwing his toy for him,” Harter said. “We connected easily and readily.”

Gomo has deployed countless of times in local schools, not only for drug searches but for demonstrations of his K9 skills. And many times while Harter gives his presentation to the students, he is sometimes upstaged by his partner.

“The dogs are always the star of the show, always steals the show,” he said, smiling. “They don’t care about the words coming out of my mouth, they just watch the dog.”

But Gomo didn’t travel more than 4,500 miles to serve only as an educator in the classroom. He came to help in other ways too.

Like many deputies with OCSO, the K9 deputy has worked with other agencies, including the U.S. Marshals, FBI, DEA and countless local agencies. He never sought any attention for his work. Gomo just wants his reward.

“For his tracking finds and his narcotic finds, he gets a toy known as a ‘Kong.’ It's designed to be durable and bounce funny,” Harter said. “As with most working dogs, he's absolutely crazy over it.”

One of Gomo’s first cases was a 2012 homicide in which a vehicle was ambushed near Santee. The suspects’ fleeing vehicle was located and stopped on Five Chop Road between Santee and Orangeburg.

The four armed subjects in the SUV ordered out of the vehicle were apparently considering their options until Gomo showed up.

Three of the subjects in that homicide were later given prison sentences of 30 years or more. One received a sentence of 11 years.

On another call, a man was reportedly dragging a woman down a street while he had her in a chokehold. He had apparently broken into the woman’s house with criminal intentions.

Deputies confronted the man in the street, but there was no clear shot for a Taser or firearm. The would-be rapist had a change of heart after seeing the K9 deputy.

“That guy’s eyes got about that big,” Harter said. “He said, ‘Please don’t let that dog bite me!’”

The woman was released and the subject taken into custody without further resistance.

In the years that followed, Gomo would be deployed in similar situations without fail or hesitation, day or night.

“The K9 unit is ready to go at a moment’s notice,” Sheriff Leroy Ravenell said. “Their value to this community can’t be calculated. And Gomo has played a big part in this unit’s effectiveness.”

Gomo’s retirement has been brought on by illnesses typical of a Shepherd his age. But before that illness overtakes him, he is being taken off the active duty roster to enjoy some “Gomo” time.

There’s no replacement in the works for the aged police veteran. But, then again, what could replace him?

Harter said it’s difficult and maybe impossible to explain the emotions of a retiring partner, a partner retiring for medical reasons. A K9 becomes not just a partner but a family member, a family member who goes to the store with you, vacations and trips, with the rest. He’s always with you.

“You learn their different barks, their different facial expressions, and body language as much as they learn yours. In a sense it's like watching a child grow into an adult,” Harter said. “In a way, he's a best friend that will, to the best of his abilities, never disappoint you.”

There’s a term for family members such as Gomo. That term is “Canis fidelis.”

Gomo is a 10-year veteran of Orangeburg County Sheriff's Office.

Gomo and handler Sgt. Ryan Harter, both of the Orangeburg County Sheriff’s Office. Gomo is set to retire this month for medical issues.

Gomo is shown during a training exercise in Orangeburg.