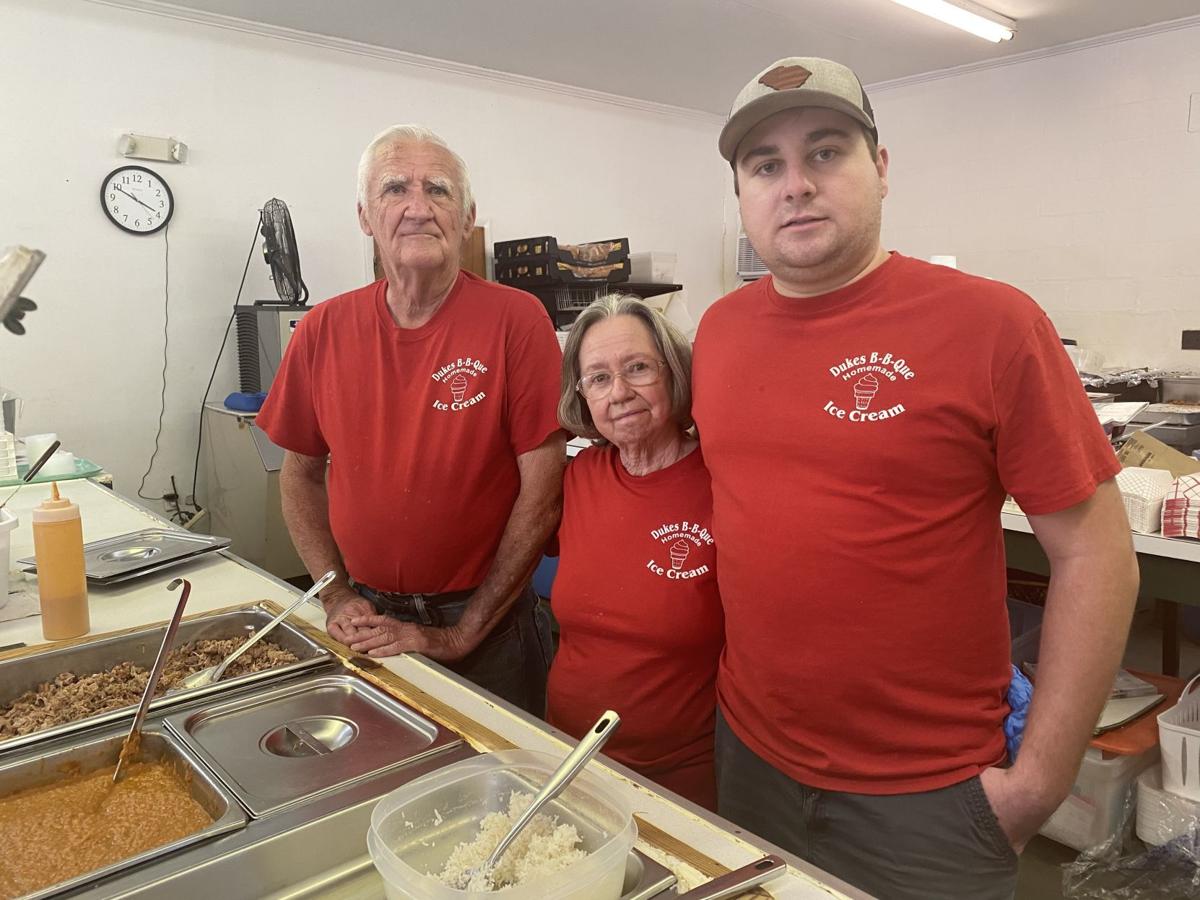 The Dukes Bar-B-Q on Chestnut Street in Orangeburg is remaining open. The restaurant’s sister store in North Charleston announced it is closing Sept. 24 after 67 years in business. From left are Orangeburg Dukes Bar-B-Q owners  husband and wife Harry Ott Jr. and Ann Ott with and grandson Stevie. 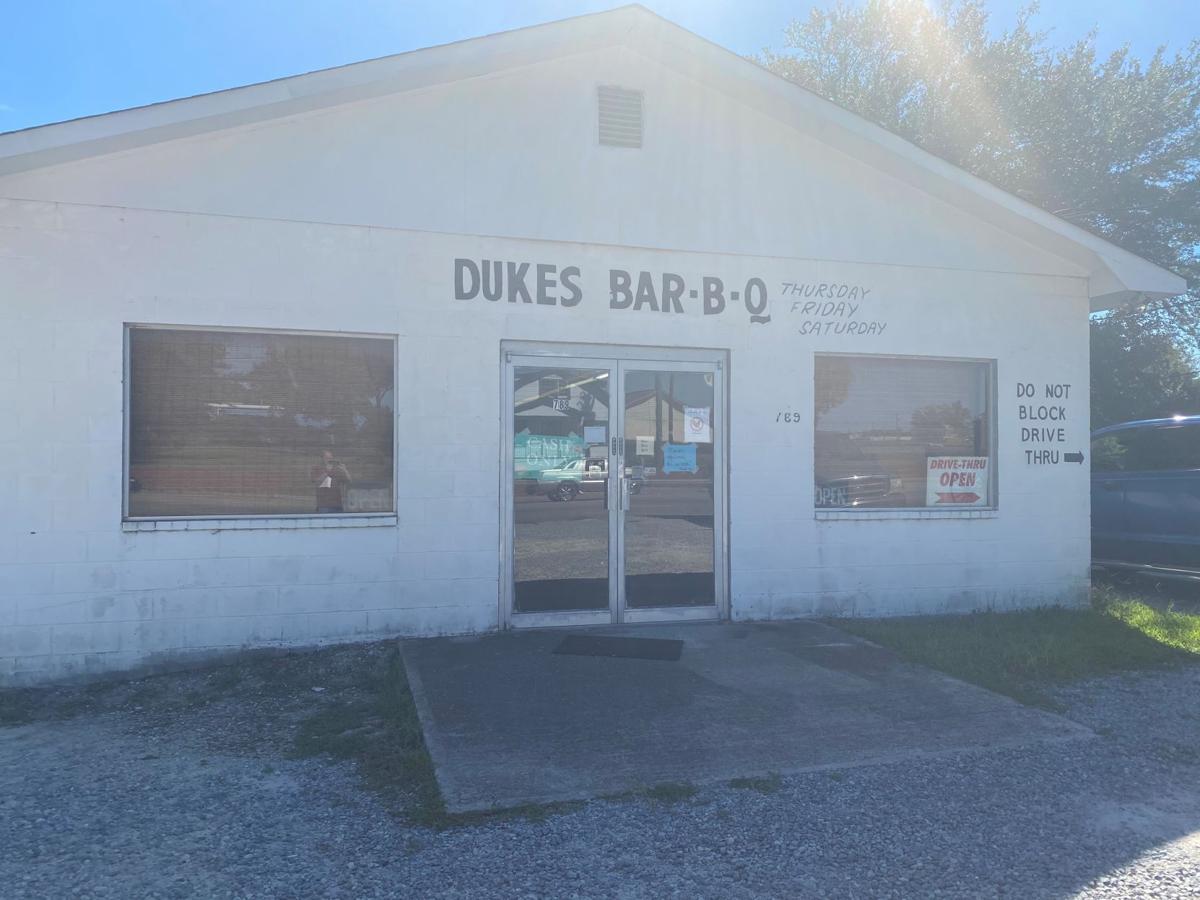 "We are not going nowhere," said Stevie Warner, grandson of owners Ann and Harry Ott Jr. "Everything is good here."

Ann Ott says Lisa, who is her daughter, decided to close the store due to personal reasons.

According to a statement from the restaurant: "The building was sold about a year ago. The new owners decided to renovate. For us to keep it as a restaurant, we'd need to bring it up to current DHEC codes and with Lisa's current health, they decided not to sign a long term lease and to close that location.

"We've served generation after generation at that location ... have seen the children of children and their children through those doors. This was a heartbreaking decision. They were as much a part of our family as we were of theirs and we are so grateful they allowed us to serve them for so many years!"

All in an auto family: 4th generation of Faireys takes over dealership

But Stevie Warner says the Chestnut Street restaurant is not only remaining open but is actually expanding its product line by now offering homemade ice cream.

Some flavors include banana and lemon.

When it comes to South Carolina barbecue, Dukes is one of the most important family names. You will find a number of Dukes restaurants scattered throughout the state.

However, Dukes is not a franchise or a chain. Despite what many people assume, all of these locations are loosely tied by family connections, but they are all separate entities.

DPU plans to spend $45M on repairs and upgrades

The barbecue's origins are right here in The T&D Region.

Danny Dukes is actually the patriarch of the Dukes barbecue legacy. He started a restaurant in Cope and in Branchville in the early 1950s.

Canaan native Earl Dukes, Danny's brother and perhaps more well known, started his restaurant in Orangeburg in 1955 at Chestnut Street and Columbia Road. The Dukes Barbecue would later move to a small cafe on Whitman Street.

From there, Dukes Sr. moved to Cameron in 1970. In order to distinguish his barbecue from other Dukes restaurants, it was named The Original Earl Dukes Barbecue.

The restaurant moved back to Orangeburg in 1983 at the Charleston Highway location. It closed around 2002.

From its origins in Orangeburg, Dukes Barbecue spread across the city and throughout the state as family members and others saw the success of the Dukes name.

In 1985, Dukes Jr. said there were "probably 20 (barbecue restaurants) in the state that use the Dukes name to ensure a good following."

The younger Dukes eventually closed “The Original Earl Dukes Bar-B-Que” on Charleston Highway, marking the end of an era for that arm of the Dukes family. But the legacy lives on in Orangeburg and beyond.

Today, the descendants of Ann and Harry Ott Jr. own and operate the Dukes Bar-B-Q on Chestnut Street. Harry’s mother Elma was Earl Dukes’ sister.

The Otts opened their first barbecue restaurant in St. Matthews in 1965. They moved the business to Orangeburg to the Chestnut Street location 10 years later.

More recently in July 2020, there was a fire in the kitchen and barbecue pits that service both the North Charleston and Chestnut Street restaurants.

The fire caused the restaurants to be closed for about two weeks.

There is also a Dukes BBQ on Whitman Street in Orangeburg, but it is not affiliated with either the North Charleston or Chestnut Street restaurants.

The Dukes Bar-B-Q on Chestnut Street in Orangeburg is remaining open. The restaurant’s sister store in North Charleston announced it is closing Sept. 24 after 67 years in business. From left are Orangeburg Dukes Bar-B-Q owners  husband and wife Harry Ott Jr. and Ann Ott with and grandson Stevie.