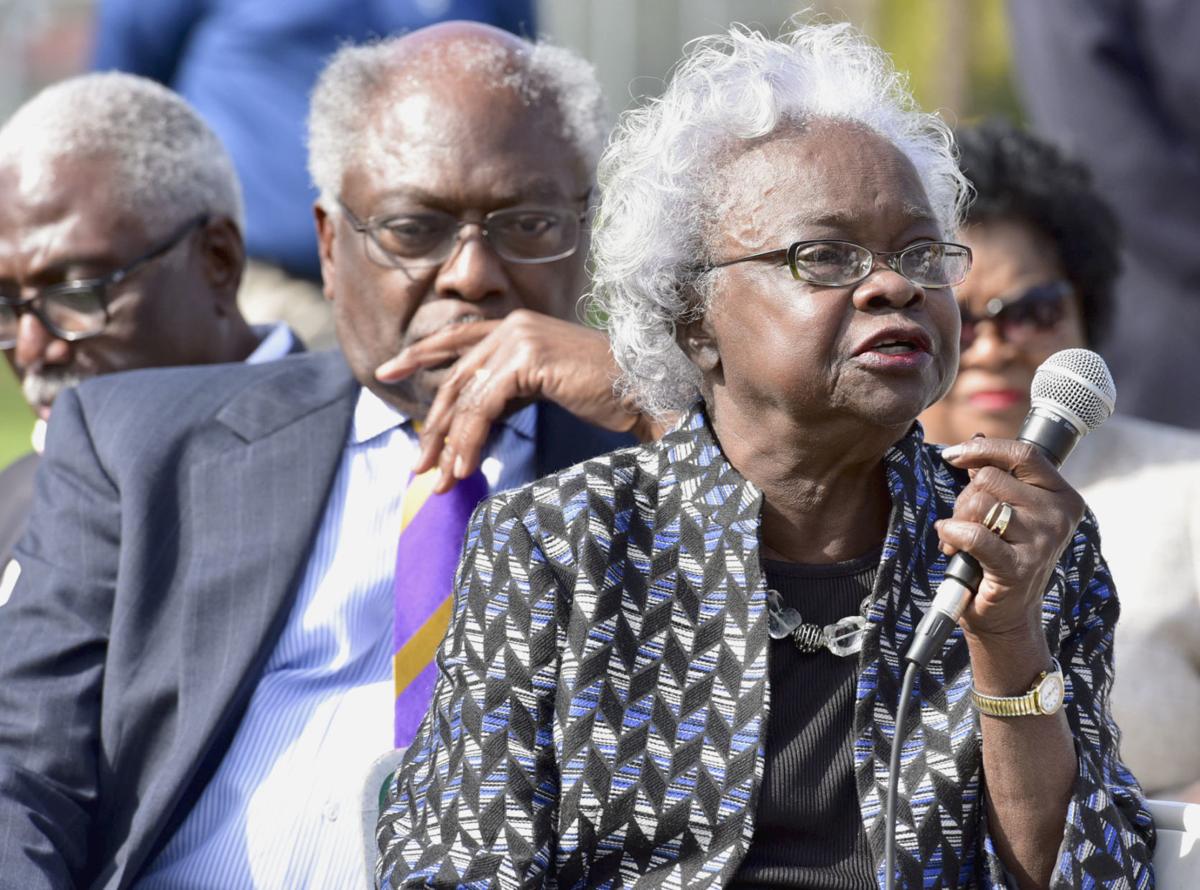 Dr. Emily England Clyburn, wife of Sixth District Congressman James E. Clyburn, was recognized Friday morning with the renaming of the pedestrian bridge over Chestnut Street in her honor. 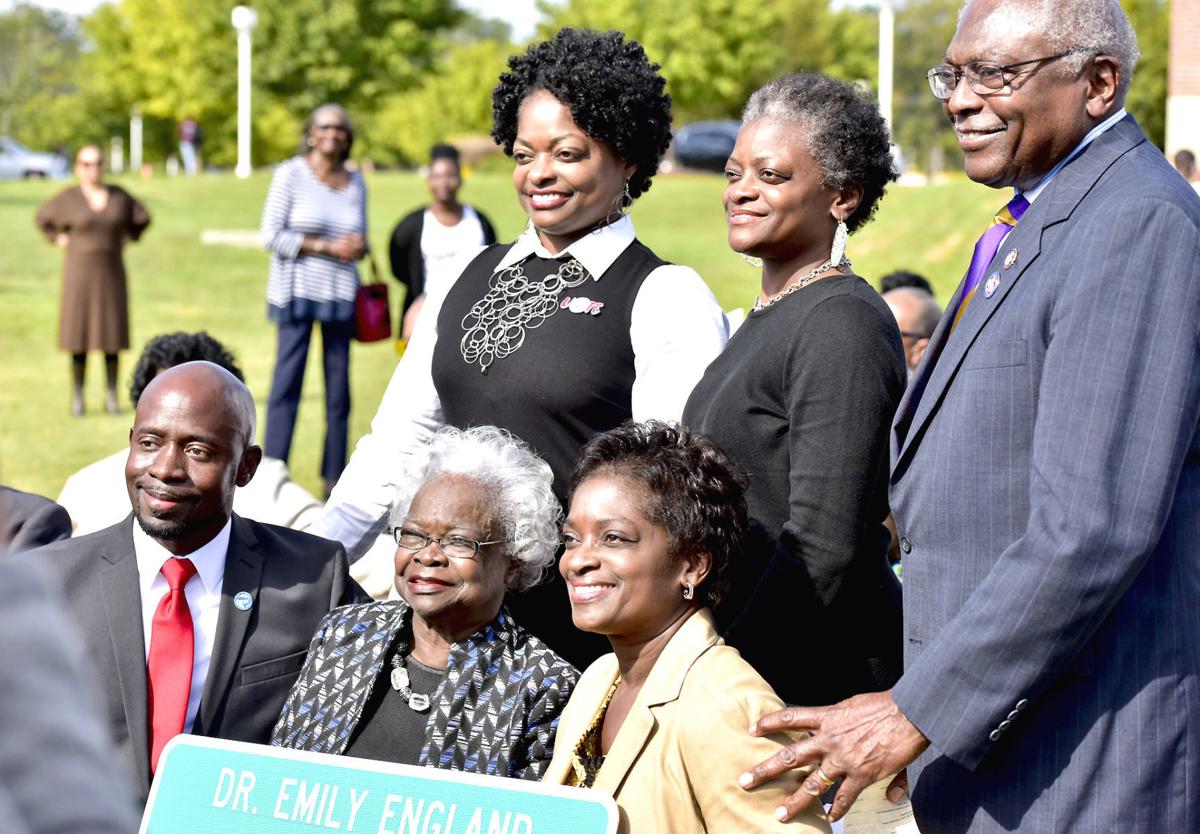 A former librarian was recognized for her extraordinary dedication to her profession and alma mater with the renaming of a pedestrian bridge that provides a safe route for South Carolina State University students.

The bridge was officially opened in May 2017. Officials say it has the potential to save the lives of S.C. State students, including those living at University Village and Campus Corner apartments.

Dr. Clyburn and her husband are S.C. State alumni and staunch supporters of the university.

Along with her husband, her philanthropic giving has included raising more than $1.7 million since 2005 for the James E. and Emily E. Clyburn Endowment for Archives and History at the university.

Dr. Clyburn, a Moncks Corner native, is the mother of three daughters and grandmother of four. She received her bachelor's degree from S.C. State nearly 50 years ago and an honorary doctorate of humane letters in 2010.

She said Friday's bridge dedication marked the second time a physical structure has been named for her.

"Several years ago, I had a ship named for me," she said.

Dr. Clyburn said she’s proud to have the bridge named after her, and grateful to those who had a hand in its completion.

"Hopefully it's going to be useful to students, parents, friends and others in the community," Dr. Clyburn said.

The concurrent resolution was unanimously adopted on March 22 to rename the bridge in Dr. Clyburn's honor for her significant contributions to S.C. State, the Orangeburg area and surrounding communities.

Matthews said the renaming of the bridge in her honor was just the first step in enhancements set to begin on Chestnut Street in the area where the structure is located.

"You probably won't know that street out there" once the work is done, he said.

Matthews added that Dr. Clyburn is deserving of her honor because she is an S.C. State alumna, "who has always remembered her alma mater with her presence and gifts."

"I am blessed to have the opportunity to be able to name the bridge in honor of someone who has paved the way for future generations in our community and our state," Matthews said. "Dr. Clyburn's contributions will forever remain not only in the history books of South Carolina, but also in the hearts, minds and lives that will be touched and impacted by her work."

S.C. State President James Clark also lauded Dr. Clyburn's contributions to the university and referred to her family as "the first family of this university."

Dr. Harriet A. Rowland, dean of the S.C. State Honors College, touted Dr. Clyburn and her family's philanthropy, recalling that it was in 2015 that the Clyburns agreed to donate $70,000 in merit-based scholarships to the Honors College.

"The provision was that that $70,000 be earmarked for seven merit-based scholarships. ... The Clyburns have always been philanthropic, and they have always looked out for HBCUs in South Carolina ... and we're hoping that they will renew the funds and we will continue this on into perpetuity, the legacy of the Dr. Emily England Clyburn Honors Scholars," Rowland said.

DeAndre' L. Hurley, president of the S.C. State Student Government Association, said, "We are grateful to you today and we look forward to future partnerships."

Congressman Clyburn said he was thankful for his family members and friends, many of whom were in attendance at the ceremony, along with the S.C. Department of Transportation and local officials who helped bring the pedestrian bridge project to fruition.

"This is a great day for me on many fronts," the congressman said.

Wright said he was appreciative of Dr. Clyburn and her family's efforts to make the county and the surrounding areas a better place.

"We are so grateful for you in this county and this community for the contributions that you have given us," Wright said.

A new pedestrian bridge is being welcomed for its potential to save the lives of South Carolina State University students.

South Carolina State University President James E. Clark will be receiving an additional $160,000 a year from the university foundation.

U.S. House Majority Whip James E. Clyburn has reintroduced his legislation to reauthorize the Historically Black Colleges and Universities His…

Emily Clyburn, the wife of House Majority Whip Jim Clyburn of South Carolina, died in Columbia on Thursday morning, according to the congressm…

Dr. Clyburn leaves her own legacy

South Carolina State University, the people of the 6th Congressional District and South Carolina have lost one of their strongest supporters.

Dr. Emily England Clyburn, wife of Sixth District Congressman James E. Clyburn, was recognized Friday morning with the renaming of the pedestrian bridge over Chestnut Street in her honor.