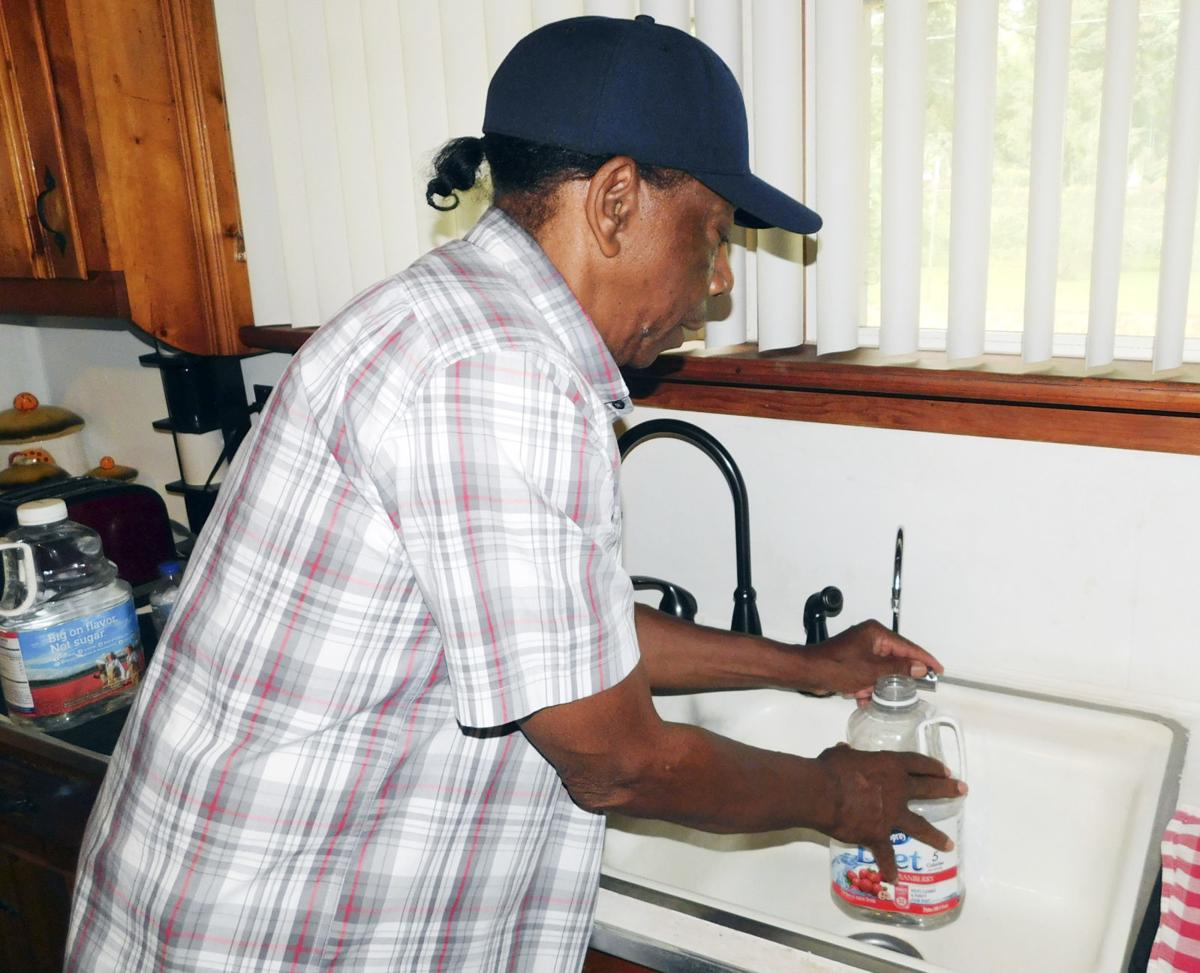 Eugene Smith pours water out of his tap – water which comes from the SOURCE system with collection panels that he and Pauline Ray Brown have in place on their roof. 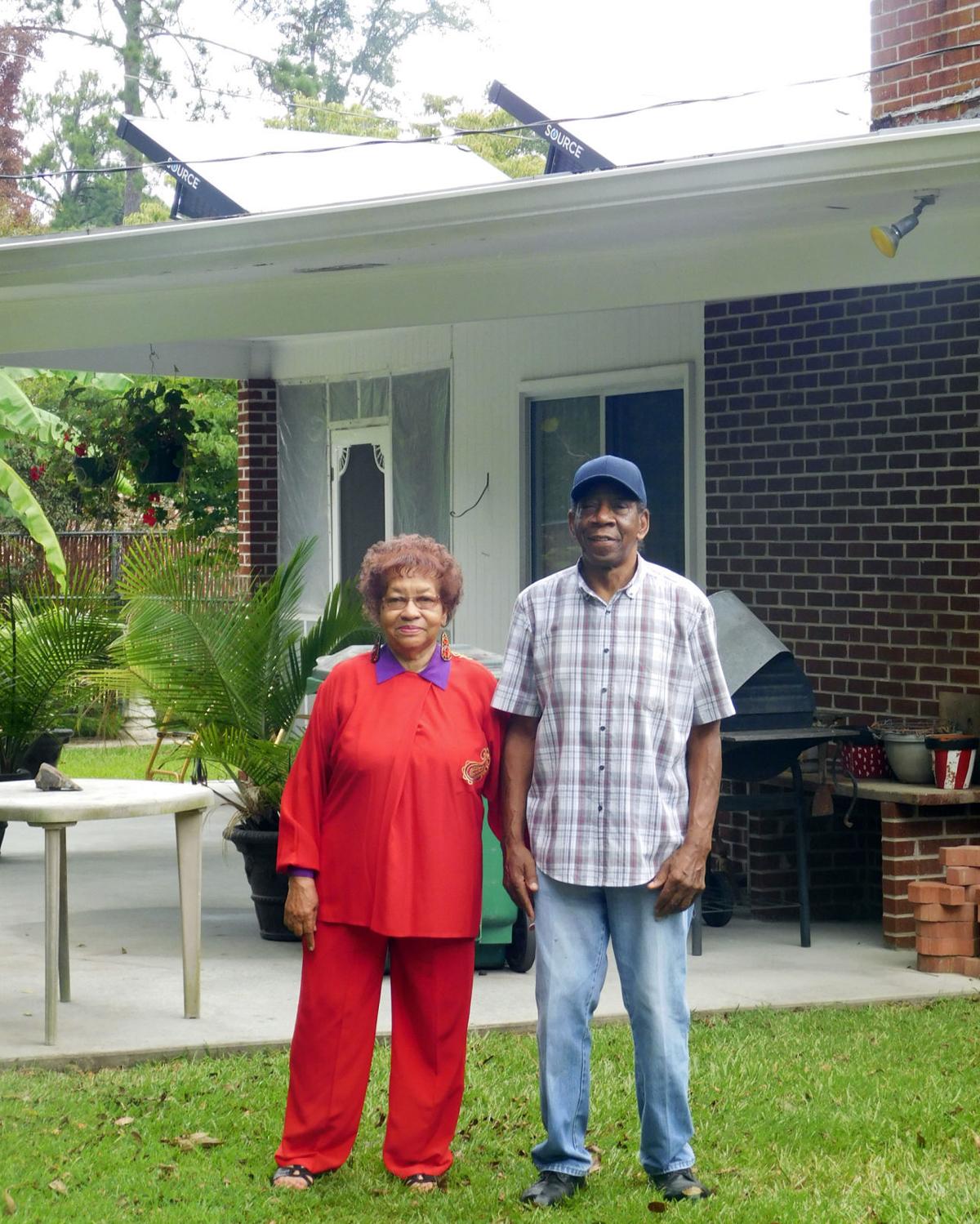 Eugene Smith and Pauline Ray Brown stand in their back yard in Denmark, where the SOURCE panels can be seen on top of their roof. The panels aid in the collection of fresh drinking water for the couple. 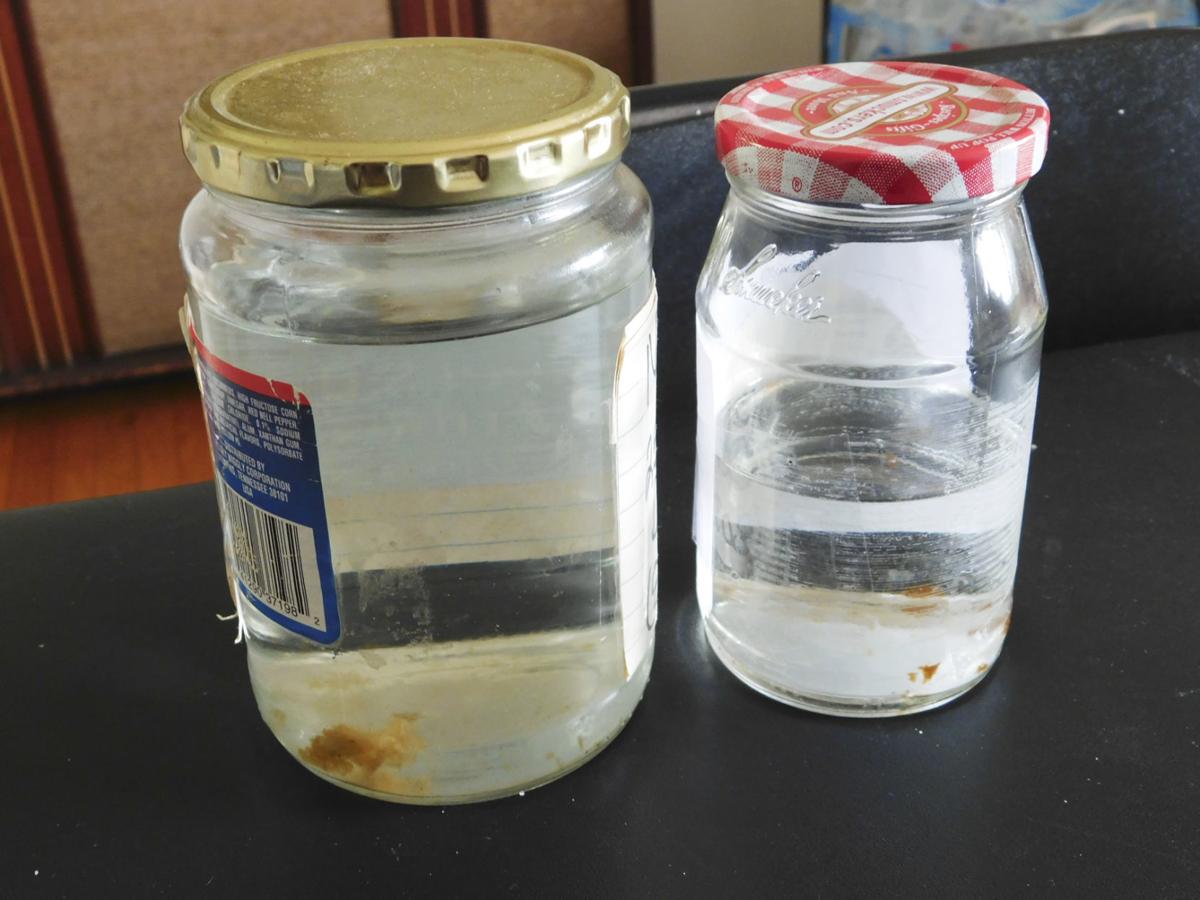 Shown are jarred samples of water that Smith says are from the City of Denmark’s water system.

DENMARK – Two Denmark residents have resorted to using alternative methods to get drinking water since the city’s water issues came to light.

Groups work together to distribute water in Denmark

It’s an alternative way for them to collect clean drinking water in addition to other methods they have been using since they stopped drinking the local water in 2009 -- a decade ago.

Smith and Brown have been in a relationship for 20 years. Smith has been living in Denmark for 23 years, and Brown has been living in the city for 20 years. They started driving 20 miles to Healing Springs for natural spring water and buying and drinking bottled water a decade ago when, according to them both, they had alleged health conditions as a result of the local water. They have now added the SOURCE as another method for them to obtain clean drinking water.

Smith said, “We have been having water issues since 2009 when we got sick and went to the doctor … We have fought so long to get clean drinking water.”

Brown said, “I’ve been talking on Big Dog radio and other media for 11 years about the water being bad in Denmark.”

SOURCE is being used as one of the alternatives to Denmark water for Smith and Brown and has large panels, which have been installed on their roof. According to company literature, it “combines sunlight and air to make, mineralize, and deliver a perfected supply of drinking water right to your tap.”

The flyer states, “Water vapor from the ambient air around us is drawn into SOURCE via fans and (is) absorbed onto special material … Pure water is absorbed into an air-tight system and is condensed inside SOURCE … Liquid water flows into a reservoir and is mineralized.”

“Drinking water passes through (a) flavor polishing cartridge before being dispersed at the tap … SOURCE panels are connected to a mesh network and are monitored real-time for production and quantity,” the flyer continues.

Also according to the flyer, SOURCE uses solar power and a small battery to help power this process whether cloudy or sunny or day or night.

“It holds so many liters of water (30 liters per panel, according to the flyer). We can brush our teeth, wash our hair, and cook with it,” Smith said.

“They are working on a way for it to be connected to the shower,” he said.

Smith and Brown have been drinking the fresh water from SOURCE and Healing Springs and bottled water while still collecting samples of the city water.

“We have been collecting water since 2009,” Smith said.

More than 100 jars of what they say are tainted water samples have been kept by them in a room in their home. The water samples appeared to be discolored and had debris in them.

“I went to the doctor because I started scratching and itching and breaking out from the water,” Smith said.

“Dr. Marc Edwards tested some of these samples,” she said.

Edwards, a professor at Virginia Polytechnic Institute, was the first scientist to discover Halosan in Denmark’s drinking water as well as high lead levels in the water, according to reports in 2017.

A former Miami resident, Brown said of the water issues, “I feel terrible about it. I didn’t know I was moving to a town with bad water. If I had known that, I never would have moved here.”

“When I was looking at television, I saw Dr. Marc Edwards,” Smith said. “I saw the trial for Michigan on C-SPAN. I made the phone call to find him. I left a message. That is when I got in touch with him, and he tested the water for us.”

Because of their findings, Edwards and his team were awarded the W.W. Kellogg Foundation Community Engagement Scholarship Award in Minneapolis, on Oct. 3, 2018. Brown and Smith were invited and, according to both, were flown via private jet from Virginia Tech to the ceremony.

“We had the best shower in the world and clean water at Virginia Tech before the left,” Brown said.

“We went and had dinner at Dr. Edwards’ house in the mountains. It had the most beautiful view … All of Virginia Tech treated us like family,” she said.

Smith said, “We were both named citizen scientists by Dr. Edwards and were given a plaque by him at Virginia Tech.”

Smith said that one of the reasons for this was that they had been collecting samples themselves as a scientist would.

A Virginia Tech doctoral student visited Brown and Smith in 2017 as well, and she recently released a transcript of some of her findings.

According to a transcript from “The Story Collider: True Personal Stories about Science” dated Aug. 2, 2019, the student, Jeannie Purchase, met Smith and Brown in September of 2017. Purchase mentioned in the transcript that at the time Smith and Brown had collected more than 40 water samples and had been making the 20-mile drive to Healing Springs for clean water.

She also mentioned them collecting cease and desist orders from lawyers, high-priced water bills, health records from doctors, letters to state representatives and newspaper articles in a large binder.

Purchase asked rhetorically in the transcript, “But the question that baffles me is how do you have bad and expensive water for 10 years and nobody is doing anything about it?”

“The people in the town are so resigned to their fate that they don’t fight it anymore,” she wrote.

“You have to change the whole infrastructure,” Smith said. “You have pipes that are in here that are 100 years old.”

Brown said, “I hope they get it straightened out, get us a new water plant, get us a water tower and get us some clean water.”

Smith stated there are other issues with the water system as well, including with billing for amounts of water used.

“We have solar panels (for the device), we go to Healing Springs and we get bottled water, but the city is telling us we are using 11,000 gallons a month.”

That adds up to about 400 gallons per day.

“There is no way we are using that much,” he said.

Smith and Brown both mentioned a leak in the lines and that it took the city more than a month to fix it.

Regarding the water quality itself, the S.C Department of Health and Environmental Control has also come to the city to give presentations on it -- including the issues related to Holosan -- and created a website to give information to the citizens of Denmark about the water quality. They also have disseminated information that the lead in the drinking water in the town and schools were low enough that the water is safe to drink.

Eugene Smith pours water out of his tap – water which comes from the SOURCE system with collection panels that he and Pauline Ray Brown have in place on their roof.

Eugene Smith and Pauline Ray Brown stand in their back yard in Denmark, where the SOURCE panels can be seen on top of their roof. The panels aid in the collection of fresh drinking water for the couple.

Shown are jarred samples of water that Smith says are from the City of Denmark’s water system.