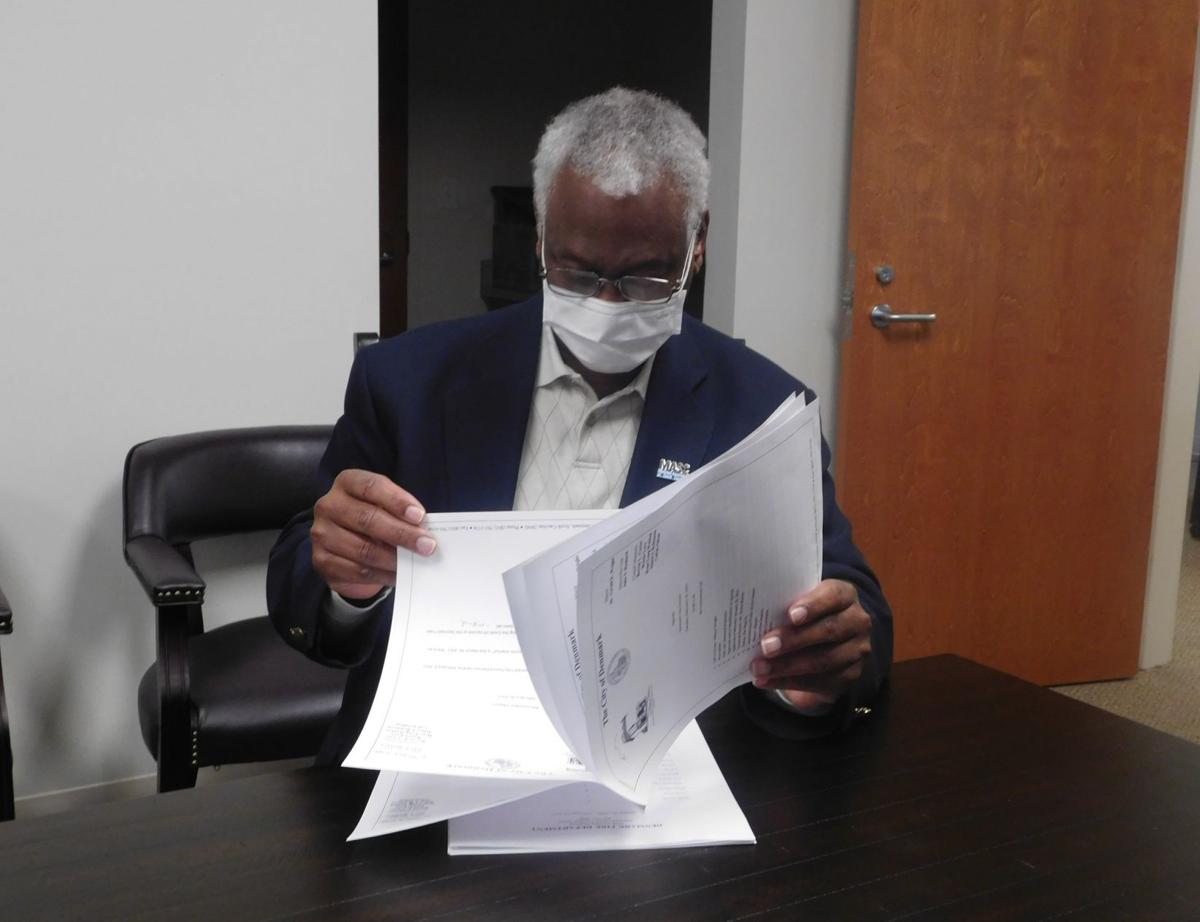 Denmark incumbent Mayor Gerald Wright will be face challenger Deanna Miller Berry in a runoff election for the mayoral seat this Tuesday, Feb. 23. Wright received 239 votes and Berry received 225 votes in the initial, general election. Citizens will cast their ballots at the West Denmark and East Denmark precincts, and in-office absentee voting began on Feb. 16. 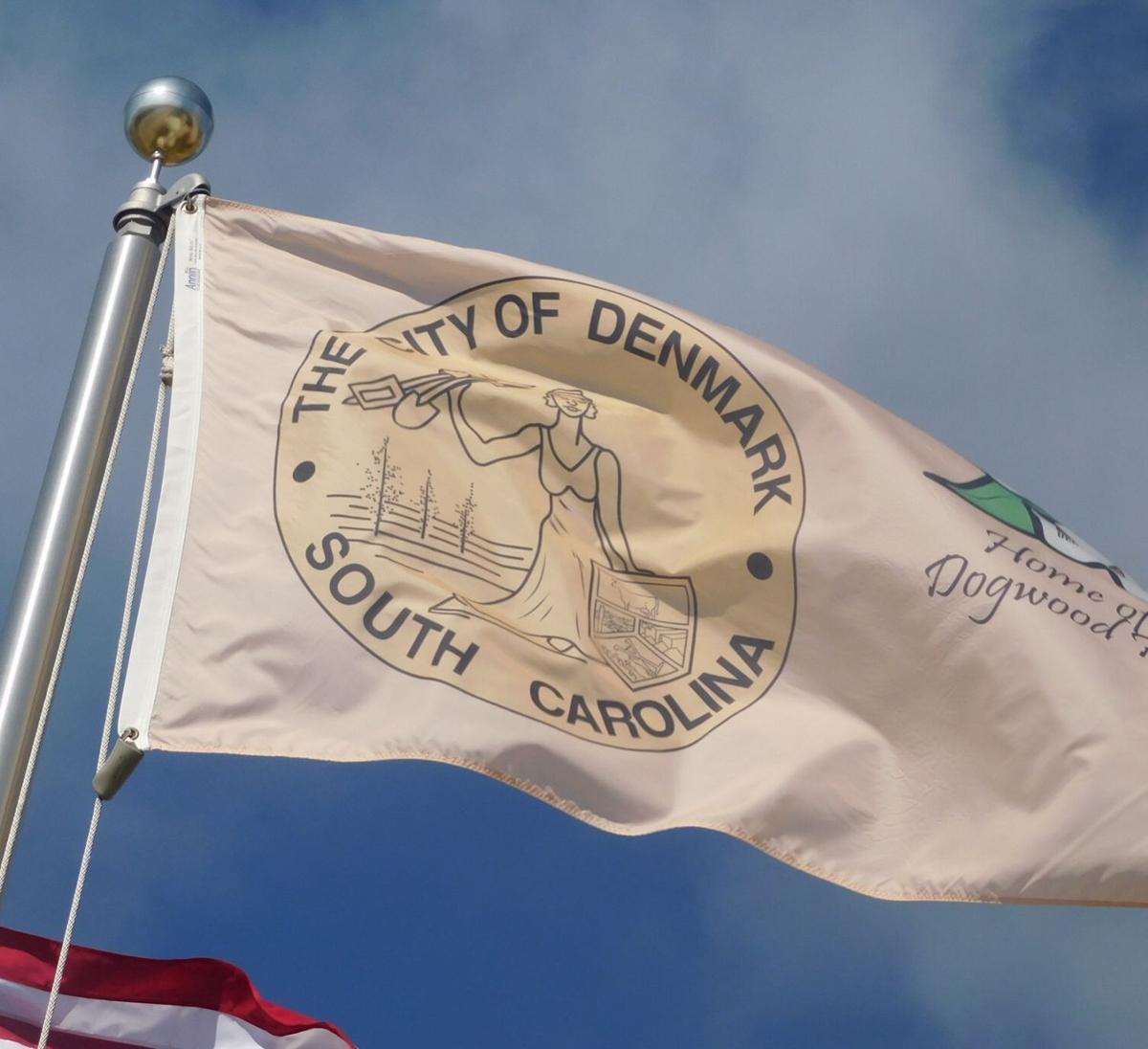 The Denmark City flag, now flying on one of three new flagpoles at the new city hall, was designed by artist Glover Richburg and was the winning entry for a contest for all citizens a couple of years ago. It includes the seal of the city and artwork commemorating the city’s annual Dogwood Festival.

DENMARK – Councilwoman Hope Long Weldon asked that the Denmark City Council agenda be amended on late Tuesday morning’s teleconferenced meeting to include her proposed discussion about changing the way the City of Denmark handles elections.

Any potential ordinance about how the city handles elections will have to be made after the mayoral runoff, which will be occurring Tuesday, Feb. 23, between incumbent Mayor Gerald Wright and challenger Deanna Miller Berry. This legally has already been set in motion and cannot be changed by an ordinance between now and next week.

Wright, being involved in a runoff, basically recused himself from any policy discussions and allowed Weldon to handle the discussion. In the initial election, Incumbent Wright received 239 votes and Berry received 225 votes. Citizens will cast their ballots in the runoff at the West Denmark and East Denmark precincts, and in-office absentee voting began on Feb. 16.

Weldon discussed her research on S.C. Code Law and the various ways election results can be determined and the way that the City of Denmark currently determines winners of elections.

She suggested the City of Denmark should try looking into the plurality method instead.

“The winner would be the person with the most votes (with this method),” Weldon said.

Weldon stated the city was having to pay extra money for an extra election.

Wright suggested council should have an ad-hoc committee on election methods with Weldon, Mayor Pro Tem James Bookard and Councilman Calvin Odom each agreeing to meet outside of council and bring their findings back at a later date.

Later in the meeting, Wright mentioned there had been some talk from citizens about what council members are paid.

“You are providing a service without compensation or, if it is, it is token compensation. You provide a service that is valuable, and a large number of citizens appreciate it,” Wright said.

Rusty Munoz, city accountant, gave the financial report and stated, “We have had over $600,000 in grant money that has come to the city so far.” He mentioned additional grant money will still be coming in.

Munoz said they received an unqualified opinion on their audit from an independent source, which is what some call a “clean audit.”

“Revenues are a little less than I would have hoped, but I hope for that to change later this year,” Munoz added.

He said, “We are virtually debt-free, though. Our debt has to do with a $1.5 million pension fund.”

Munoz explained that the state requires that each municipality be in charge of their own pension funds and oversee those funds and more.

Odom alerted the phoned-in council members and citizens that South Carolina is still leading the nation in new cases of COVID-19, according to the South Carolina Department of Health and Environmental Control, because of citizens not following protocol.

Wright said the city would work to get more printed information out there about this.

Robinson added that the Regional Medical Center will be administering COVID-19 vaccines at the Denmark Train Depot, but an exact day and time of the vaccinations had not been set as of press time. Contact RMC or Denmark City Hall for more information.

• Police Chief Leroy Grimes said they had 21 new cases in the past month, including simple assault, aggravated assault, burglary, domestic violence, shoplifting, vandalism of property, missing person, disorderly conduct, driving under suspension, traffic collision, driving under suspension and more. He stated that Municipal Judge James Spellman did not have court in January or February but would be holding court on Thursday, March 18. This has usually been held at the Brooker Center chambers in Denmark. Contact the Denmark City Hall for more information.

• Weldon and others agreed but did not propose a motion that Denmark should make sure their police officers’ salaries are competitive with those of surrounding areas. Wright said the city would be looking into this.

• Councilman Odom mentioned, as in previous meetings, a person who appears to have a drinking problem, throws litter everywhere, gets in the way of the roads in town (sometimes lying down and putting his legs in the road) and is a public nuisance. Several officials at the meeting stated he is not homeless, but that his family members do not know what to do with him either. Wright said that the person with these issues has been littering the post office area in the city. He added that he will be discussing the issues surrounding this individual with Grimes for the appropriate course of action.

• Wright said that a few individuals such as the one mentioned can give the city a bad name. The City of Denmark, in fact, is, with such accomplishments as the City Hall, trying to affirm its good name by having applied for an Achievement Award with the Municipal Association of South Carolina. Wright said, “We still get compliments from people who pass through our town. We still want to maintain that image.”

• Brookard said, “Recently, I was at Jim Harrison Park. I was surprised with the conditions of some of the park benches there.” He said he wished to assist with this.

• Robinson, in the absence of Fire Chief Breeland, stated that the fire department responded to 20 calls the past month.

• Victims Advocate officer Brittany Williams phoned in to the teleconference and during public comments mentioned that she has been working for the City of Denmark and Denmark Police Department for eight years and wanted to thank the city for making her feel at home there.

A Clemson University graduate has been selected to serve as the Regional Medical Center's new chief executive officer and president.

A Canton, N.C. man is facing a simple possession of marijuana charge after his vehicle crashed into the Bamberg Police Department on Wednesday…

Denmark incumbent Mayor Gerald Wright will be face challenger Deanna Miller Berry in a runoff election for the mayoral seat this Tuesday, Feb. 23. Wright received 239 votes and Berry received 225 votes in the initial, general election. Citizens will cast their ballots at the West Denmark and East Denmark precincts, and in-office absentee voting began on Feb. 16.

The Denmark City flag, now flying on one of three new flagpoles at the new city hall, was designed by artist Glover Richburg and was the winning entry for a contest for all citizens a couple of years ago. It includes the seal of the city and artwork commemorating the city’s annual Dogwood Festival.