Become a Member
Read Today's E-edition
Share This
WATCH NOW: Three injured as tanker plows into Cordova store; Quick Pantry #4 condemned, may have to be rebuilt
2 comments
Share this 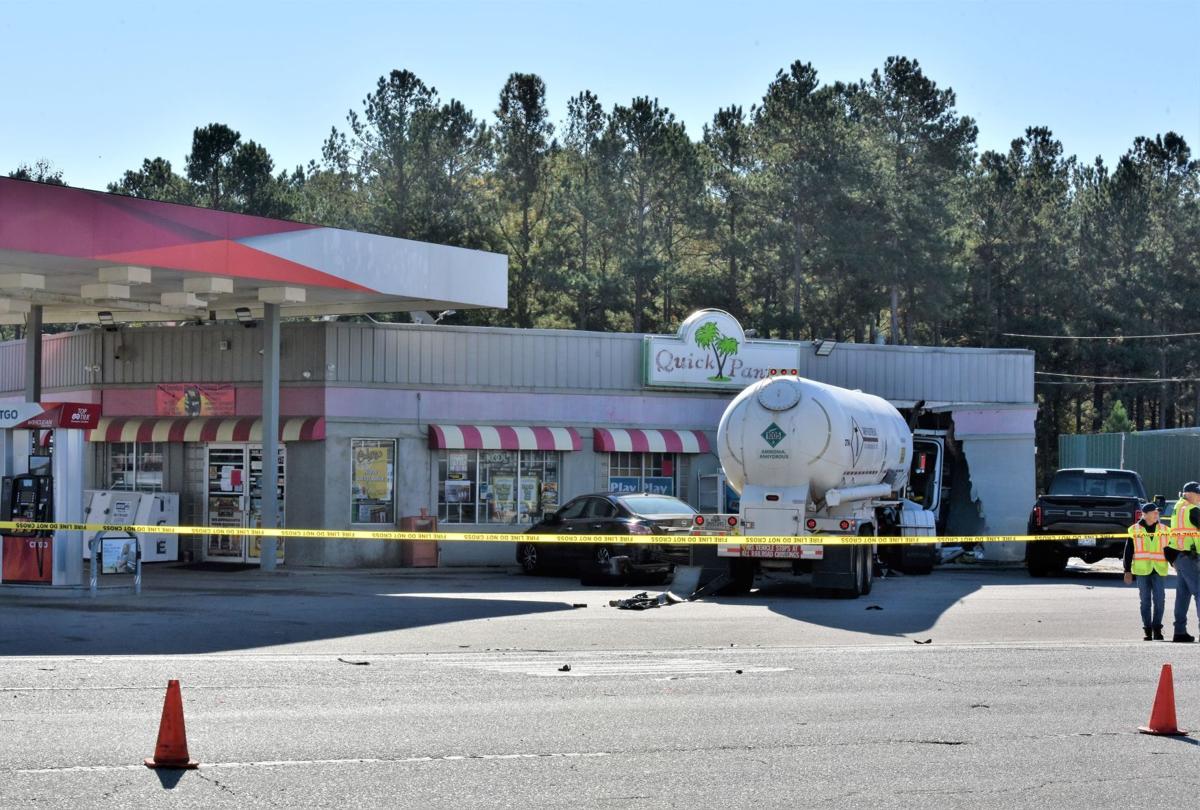 Three people were injured in a four-vehicle collision in Cordova on Monday morning. A tanker truck crashed into the Quick Pantry #4 at the corner of Legrand Smoak Street and U.S. Highway 301. 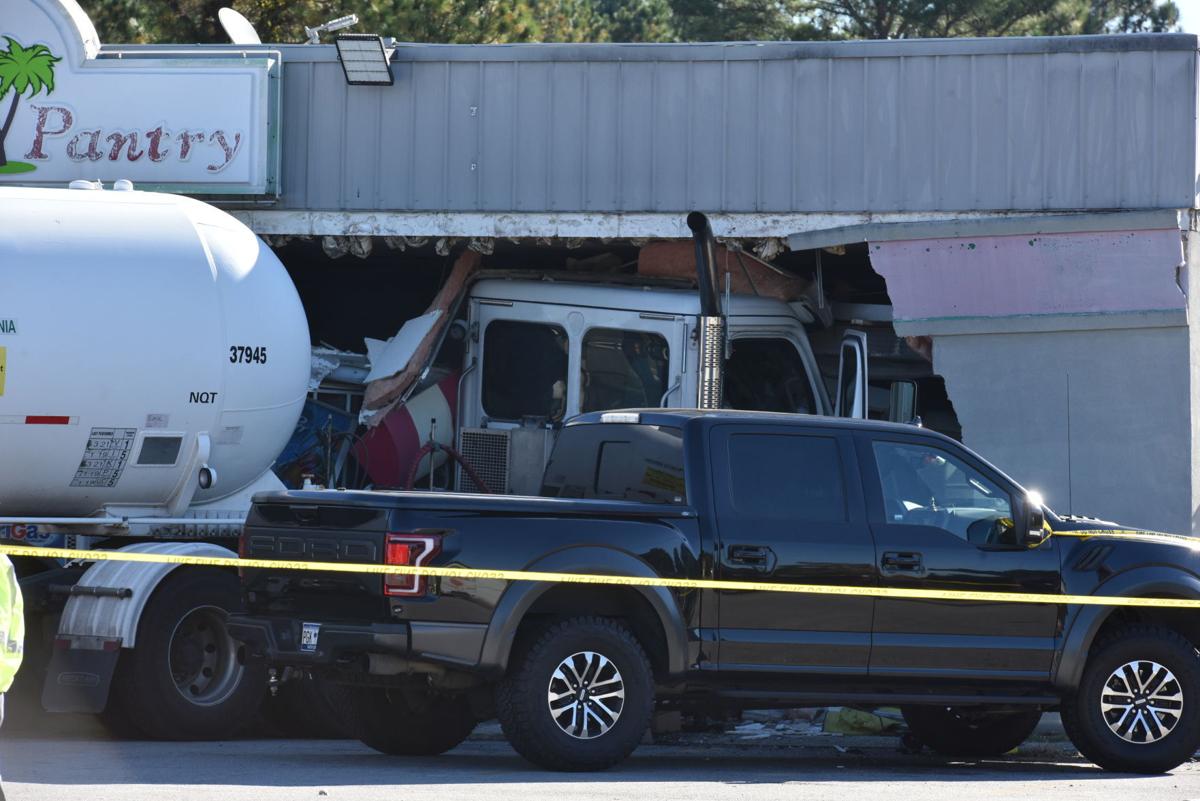 Quick Pantry #4 was condemned Monday morning after a tanker truck plowed into it.

Three people were injured in a four-vehicle collision that included a tanker truck plowing into a Cordova convenience store on Monday.

The tanker truck pushed a vehicle containing a person into the building.

“That’s where the person was entrapped, but they were finally able to get out,” Orangeburg County Fire District Coordinator Teddy Wolfe said at the scene.

The collision occurred just before 8 a.m. as the tanker was traveling south on U.S. Highway 301, also known as Bamberg Road, according to S.C. Highway Patrol Lance Cpl. Nick Pye.

The tanker and another vehicle collided, he said.

The tanker then crossed over the northbound lane, near the intersection of Legrand Smoak Street, and went off the roadway into the parking lot of the Quick Pantry #4.

At that point, the tanker struck two parked vehicles.

At least one of the vehicles was occupied. The force of the collision pushed the occupied vehicle into the building, Pye said.

Emergency crews had to extricate the occupant of that car.

When Canaan Fire Department responders arrived at the scene, of Quick Pantry #4, they radioed, “We have a truck in the building,” Wolfe said.

Emergency crews immediately called back, “We have entrapment with one car in the building,” Wolfe said.

Wolfe said initially reports came in that the tanker was hauling gasoline, but firefighters later determined it was anhydrous ammonia, a flammable toxic gas.

Anhydrous ammonia, according to the Centers for Disease Control, is used in manufacturing, refrigeration and agriculture, such as for fertilizer.

The tanker was full of anhydrous ammonia, but not leaking, according to Orangeburg County Office of Emergency Services Director Billy Staley.

Wolfe said emergency crews checked to see if the building was safe.

“They’d already assessed the building and obviously it’s not in good repair, so the building is condemned,” he said.

G. Patel, one of the owners of the building and business, said he was able to go inside before officials condemned it.

“It looks like very big damage. We might have to tear down this one and build a new one,” he said.

“Everything on one half is damaged,” Patel said of the building.

“The back wall will fall down when they take out the truck,” he said.

He said none of the employees were injured.

Patel noted he’s had the business for about 20 years. There have only been a few minor break-ins during that time.

“That’s to be expected in this type of business,” he said.

He wasn’t at the business when the collision occurred, but arrived moments after getting the phone call.

When he saw the damage, “I could not think of anything. This was just one kind of incident we have never seen before and my mind went blank.”

“There are good people over here. It’s a family business. All of the customers are family too,” he said.

He noted approximately 95 percent of the customers are locals. The other 5 percent are travelers who pass through.

To the customers, Patel says, “We’re sorry for the inconvenience. We’re going to try to fix the building as soon as possible, otherwise we’re going to build a new one.”

Patel said he also wants the traffic light at the intersection to be controlled better and the maximum speed reduced to 35 mph.

Tanner Industries Inc., the company affiliated with the tanker, said the driver was not injured.

“The tractor trailer was secured and safely towed from the scene. No product was released. We will continue to work with and support the state and local police and authorities in their investigation. We appreciate the efforts of all emergency responders that responded to the accident scene,” the company said in a prepared statement.

The Edisto and Pine Hill fire departments also responded to the scene.

The collisions remain under investigation by the S.C. Highway Patrol.

Emergency responders are at the scene of a crash at the corner of U.S. Highway 301 and Legrand Smoak Boulevard, where a tanker truck went into…

Three people were injured in a four-vehicle collision in Cordova on Monday morning. A tanker truck crashed into the Quick Pantry #4 at the corner of Legrand Smoak Street and U.S. Highway 301.

Quick Pantry #4 was condemned Monday morning after a tanker truck plowed into it.