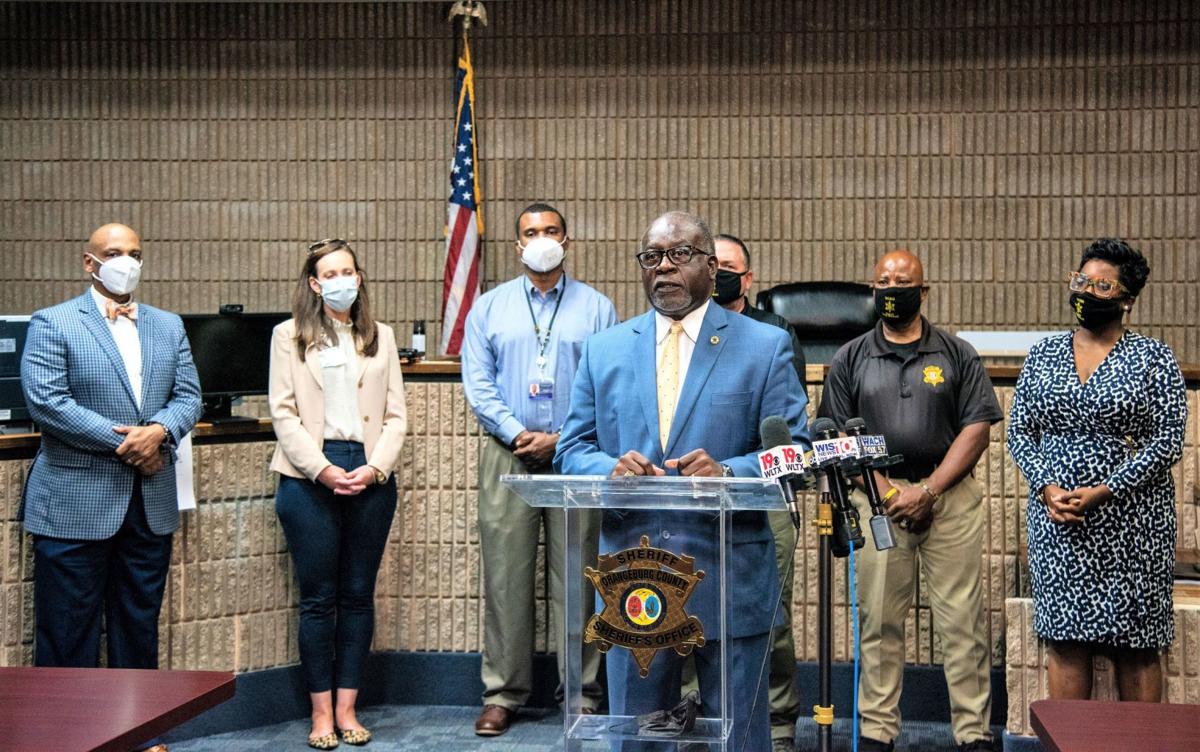 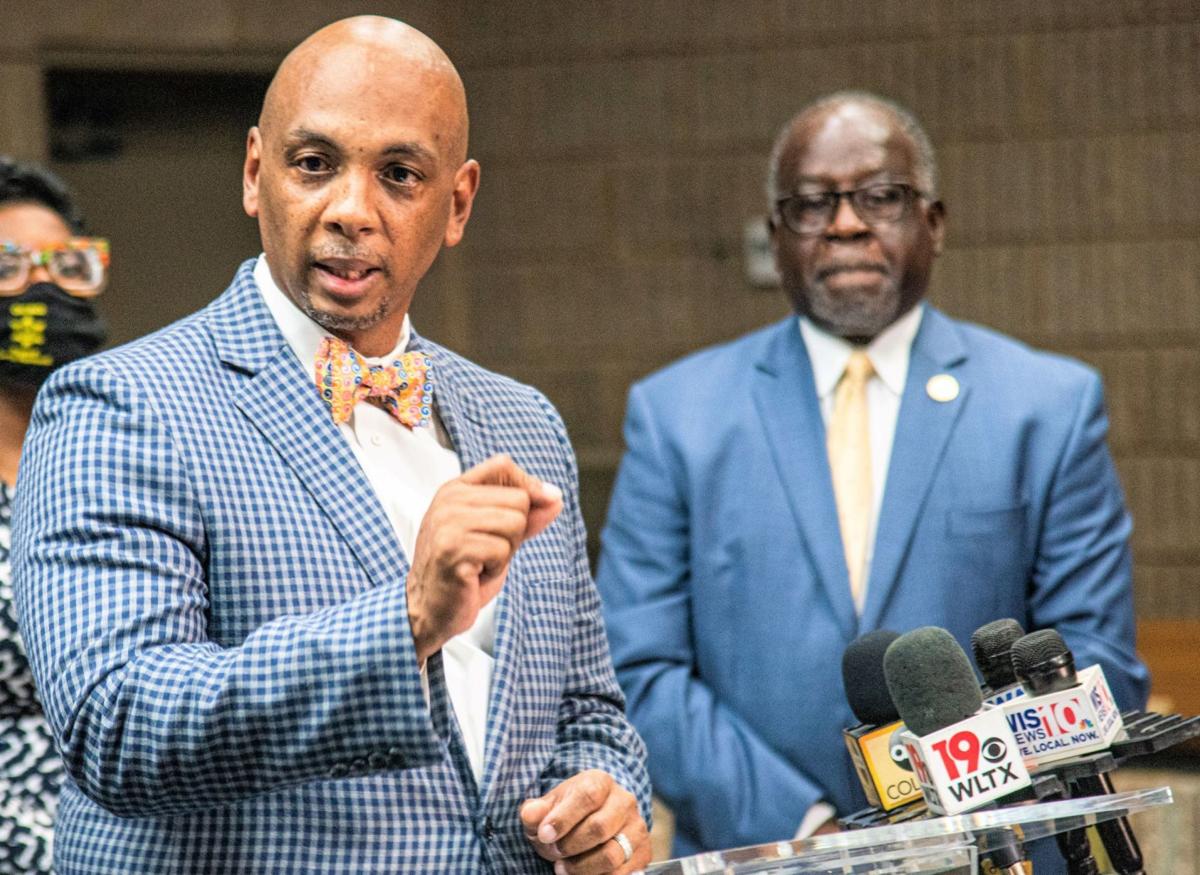 A 14-year-old male is facing multiple charges in the wake of Wednesday’s shooting at Orangeburg-Wilkinson High School. Three students were injured.

Deputies transported the teen to the S.C. Department of Juvenile Justice in Columbia on Wednesday night.

Other people will likely be charged in the incident, too.

The 14-year-old is facing the charge of possession of a weapon during the commission of a violent crime, possession of a firearm on a school campus and three counts of assault and battery with intent to kill, Ravenell said.

If convicted as an adult, the 14-year-old faces up to 30 years in prison, Ravenell said.

The shooting occurred around 4 p.m. at 601 Bruin Parkway. Ravenell noted additional law enforcement officers were on campus within 10 minutes. A school resource officer was already there, he said.

Ravenell said the shooting took place on the back of the school campus. He wouldn’t say if the suspect was a student at the school.

At one time during the press conference, Ravenell said, “The quick response to what was going on inside with the staff and then law enforcement arriving, this student couldn’t get off campus, so he had to take shelter somewhere and was located in there a couple of hours later.”

A reporter asked Ravenell to verify the suspected shooter was a student.

“If I said ‘student,’ you can print what you want, but I didn’t mean to say ‘student,’” Ravenell said.

He also stated he didn’t know how the suspect got on campus.

Ravenell noted that investigators initially thought the incident was drive-by shooting, but later determined it wasn’t.

He called it an “isolated incident,” but wouldn’t go so far as to say the three injured students were targets, when asked by a reporter.

“It could have been worse,” he said.

He’s not certain how many shots were fired during the incident, but investigators located a weapon they believe the shooter used.

Ravenell said law enforcement and school officials documented the names of students and their contact information so they could account for each of the 308 students on campus during the incident.

Officials compared the names of the students with those who’d signed in that morning before letting them leave the school.

“Oftentimes you see across the country, at school shootings in general, you see law enforcement with long guns running students out across the football field or whatever,” Ravenell said.

“Yesterday, I think that with the situation we had, we had the situation under control at that time within the building. Everybody was secure in different areas. We had law enforcement stationed with each of these groups of students,” he said.

Ravenell noted they had enough time to document and get every student out to their parent or guardian.

“This is a fresh, ongoing investigation and trust me, we’re not trying to withhold any information from you or anything,” Ravenell told journalists.

After the press conference, the sheriff’s office provided reporters with a copy of the incident report, but didn’t provide the supplemental investigative reports that contain additional details. The T&D has requested those reports.

The sheriff’s office, in partnership with Save the Children, kicked off Book-A-Cop at Bethune-Bowman Elementary School. The program provides deputies with bags of books and toys that they can deliver to children when responding to calls at homes.

After leaving Bowman, Ravenell drove through the parking lots of other schools throughout the district. One of those schools was Orangeburg-Wilkinson, he said.

About 20 minutes after Ravenell had returned to his office, the call came in about the shooting at Orangeburg-Wilkinson.

“There are things that are happening in our county with our partnerships with the schools and different things, but every time something happens like this, everybody want to point their finger at Ravenell – this is a community problem,” he said.

“This is not Ravenell’s problem, this is a community problem and until we get that concept and really take it into consideration that we need to do something before things happen and then bring in law enforcement and bring in school officials, we’re going to continue to have these problems,” he said.

“This is a problem that we have and we have to do something about it more than just talk,” he said.

“People ask me all the time, ‘Ravenell, why all the shooting?’ not only in Orangeburg County, but all over the state,” he said. “Because everybody has a gun, that’s why, and we’re passing laws that don’t help this.”

Ravenell asked for continued prayers for the three students who were shot. He also asked the community to pray for students’ families.

During a phone interview after the press conference, the mother of a 17-year-old male who was shot in the incident told The T&D that her son underwent surgery on Wednesday night.

He’s now home and coping with nerve damage in one of his feet.

“I’m calming down. I haven’t slept yet,” she said.

The T&D did not use the name of the woman or her son at her request.

Foster and Ravenell are asking anyone with information about this shooting to contact the Orangeburg County Sheriff’s Office by dialing 911 or Crimestoppers at 1-888-CRIME-SC. Callers don’t have to give their names.

Prayers to be offered for Orangeburg-Wilkinson; vigil scheduled for Sunday

Orangeburg-Wilkinson students out of hospital; new procedures in place for return after shooting

The three students shot at Orangeburg-Wilkinson High School on Wednesday have been released from the hospital, officials announced Friday evening.