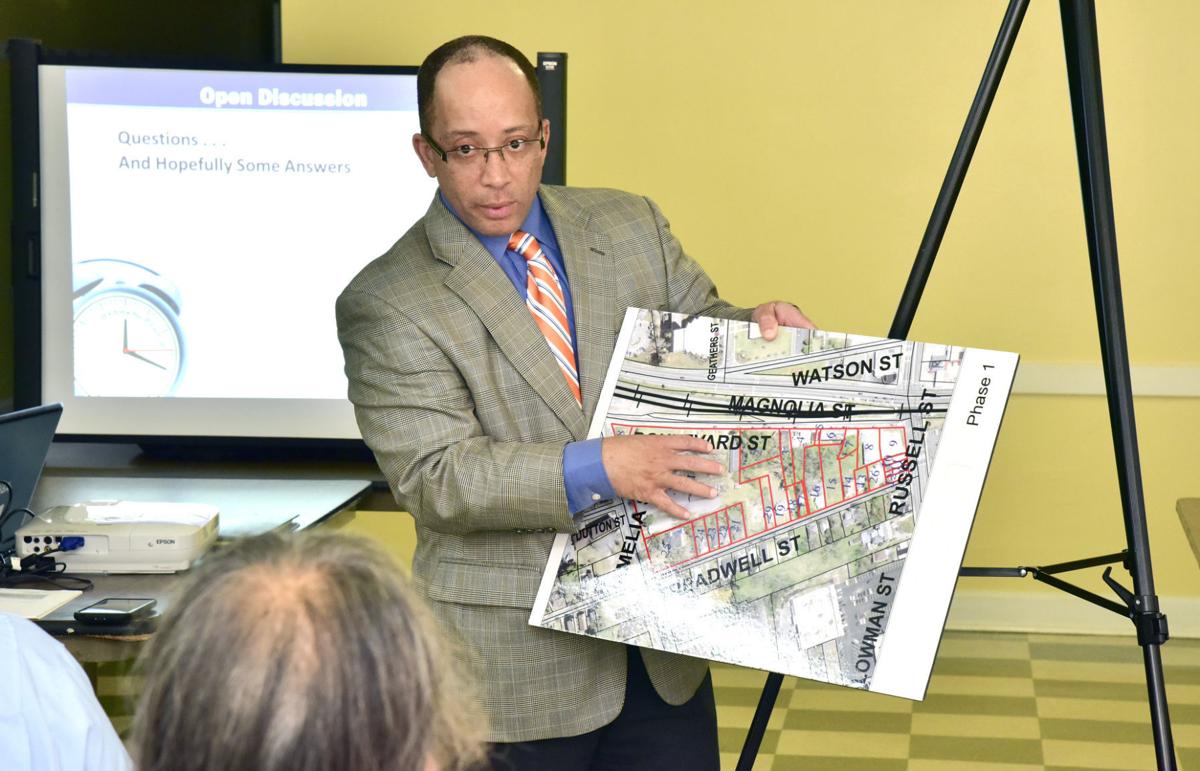 Real estate developer Fred Johnson gives an overview to owners about plans his firm and the city of Orangeburg are developing for Railroad Corner. 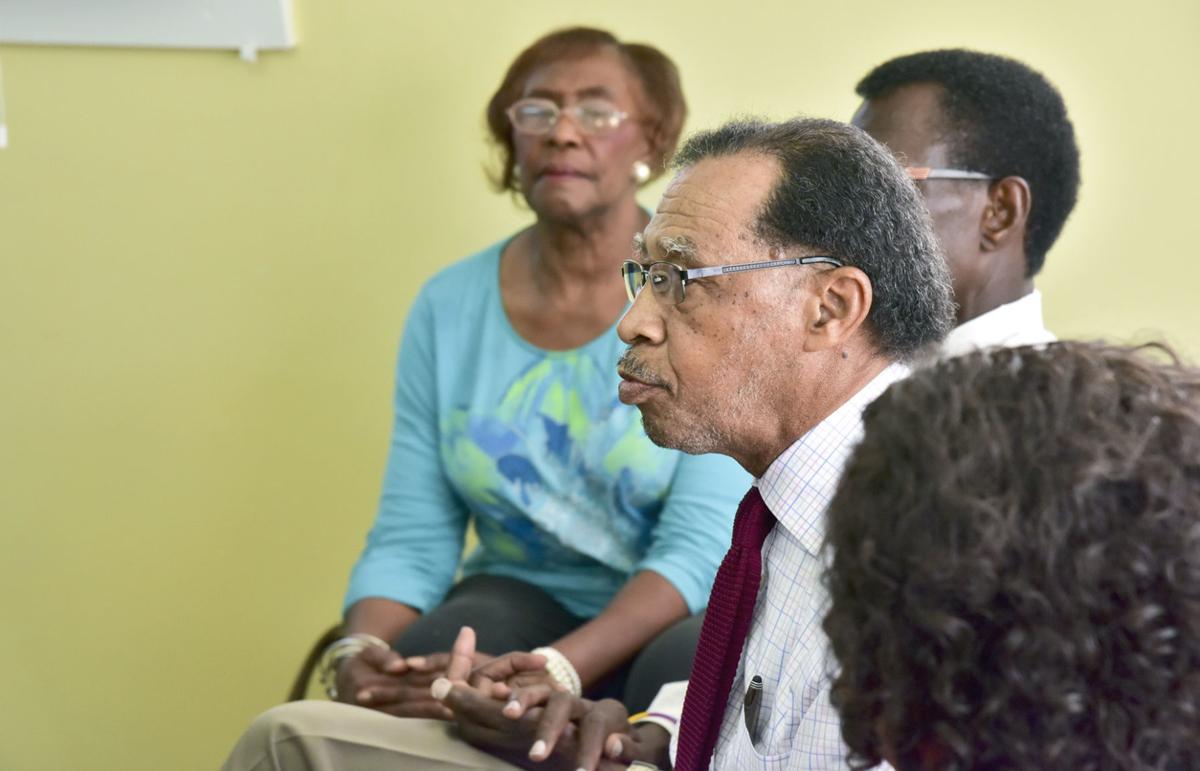 Property owners were in general agreement Wednesday about the need to develop and revitalize Railroad Corner, but voiced some concerns about existing tenants.

“I am concerned about those persons who have made a living on the Railroad Corner for all these many years that you don’t displace them by putting a dollar value on property out of their reach,” property owner George Dean said.

“There will be some displacement,” he said.

About a dozen property owners met with Columbia-based F.A. Johnson Consulting Group at Trinity United Methodist Church’s JW Curry Center to share their concerns and vision for the development of the area near the intersection of Russell, Magnolia and Boulevard streets.

Dean said while he applauds the efforts revitalize the area, it needs to be done in a way that does not harm those currently there.

Dean blames city officials over the past several decades for failing to step up to the plate to improve the corner and help property owners be more successful.

The area has flooded for years and the city has done little to nothing to improve infrastructure, he said.

“That Railroad Corner has a very significant history for African-American people of the Orangeburg community. We have been totally ignored by the city of Orangeburg,” Dean said.

Orangeburg resident Harvey Elwood Jr. said “That is over, George.”

He said there is a need to look to what is happening in the present and the potential for the future.

“This is a wonderful thing,” Elwood said.

After the two exchanged words, Elwood left the meeting.

While improving the intersection has been discussed for years, Orangeburg Mayor Michael Butler made it a priority when he took office in September 2013.

“Our main focus is we want that area developed,” Butler said. “When people come down (U.S.) 601, they say they are in the wrong neighborhood.”

While there is a desire to make the area attractive, the property owners need to be participants, he said.

“We cannot move without you,” Butler said. “We need you. We have plans to improve Orangeburg and make it a beautiful city as it relates to the Railroad Corner.”

In April, the City of Orangeburg spent about $20,000 for consultants Fred Johnson and Jim Pagett to help the city through the process of developing the plan’s first phase, which includes appraisals and environmental assessments.

On Wednesday, the consultants encouraged property owners in attendance to at least authorize them to proceed with property appraisals. Johnson noted reputable appraisers would be used.

“Agreeing to an appraisal is not a commitment that you are selling,” Johnson said. “It is a part of the process. This is truly day one.”

Johnson said there is much improvement that can be done on the corner.

“We need to create that value and make something happen,” he said.

He also said about 27 parcels with 22 different owners are involved with a number of potentially expensive challenges, such as drainage issues.

“It is going to take a lot of heavy lifting to make it happen,” Johnson said.

Johnson and Pagett said plans are to have the appraisals done as soon as possible with hope property owners will receive them within a 30-day period.

Butler stressed the city’s desire to work with property owners, noting the entire process will be voluntary and not forced.

“We are shooting straight,” he said.

Lenwood Ross, who owns the empty parking lot at the corner of Russell Street and Boulevard Street, traveled all the way from Rocky Mount, North Carolina, to attend the meeting. He has owned the property for about 12 years.

He says he would be willing to sell his property under a condition.

“I think the city could work with the developers to make sure everyone gets a fair price for their property,” Ross said. “But you know, fair is relative.”

Ross said he does see a lot of potential in the project.

“With the two universities across the street, I would think they could put a center and something for the students at the university, maybe something green,” he said. “I think it could be something that could incorporate some historical interest to students.”

David Tartell, who owns a 4,500-square-foot house on Amelia Street, says he and his wife have put the house up for sale partly because they are concerned about the lack of opportunities for their son.

He says the couple put a lot of money into renovating the house, which was built in 1890.

“I realize now that we will never get all that money back,” Tartell said. “I have to live somewhere. If I don’t get enough money to buy another home, I can’t move. I am not going to live under a bridge.”

Tartell said he needs to get a good appraisal to consider moving forward. He has agreed to have the appraisal done.

“I hope with these appraisals and assessments that we are able to purchase another home,” Tartell said.

Attendees also asked questions about the relocation of leased tenants and to what extent will the city be willing to work with property owners.

“We are open to any reasonable conversation,” Johnson said.

The city is envisioning mom-and-pop stores, restaurants, a sports bar and bicycle trails for the area.

Funding will be sought from the S.C. Department of Commerce, grants, the Orangeburg County Legislative Delegation and the city.

Real estate developer Fred Johnson gives an overview to owners about plans his firm and the city of Orangeburg are developing for Railroad Corner.