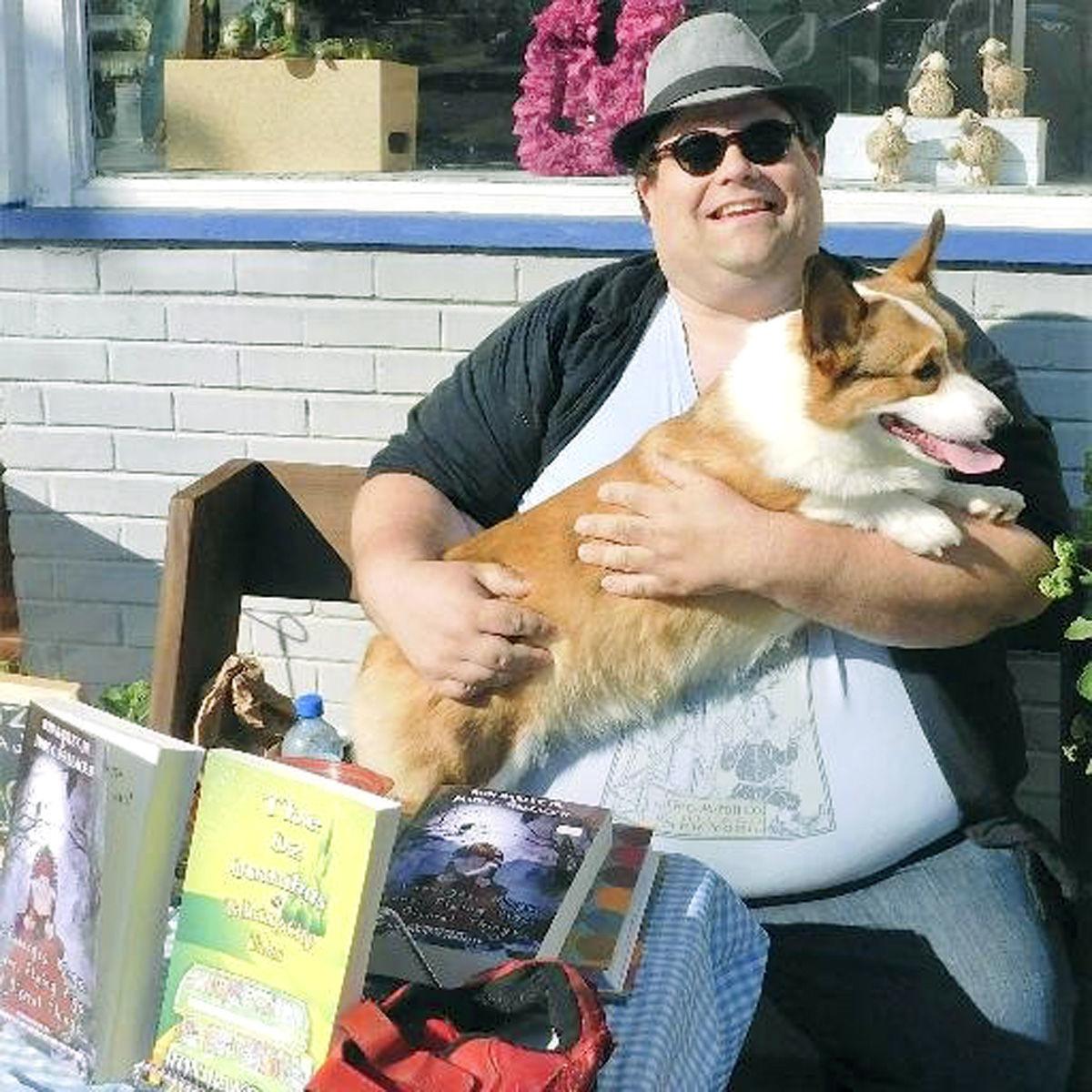 Author Ron Baxley Jr. poses with his Corgi, Ziggy, upon whom his new graphic novel is based. 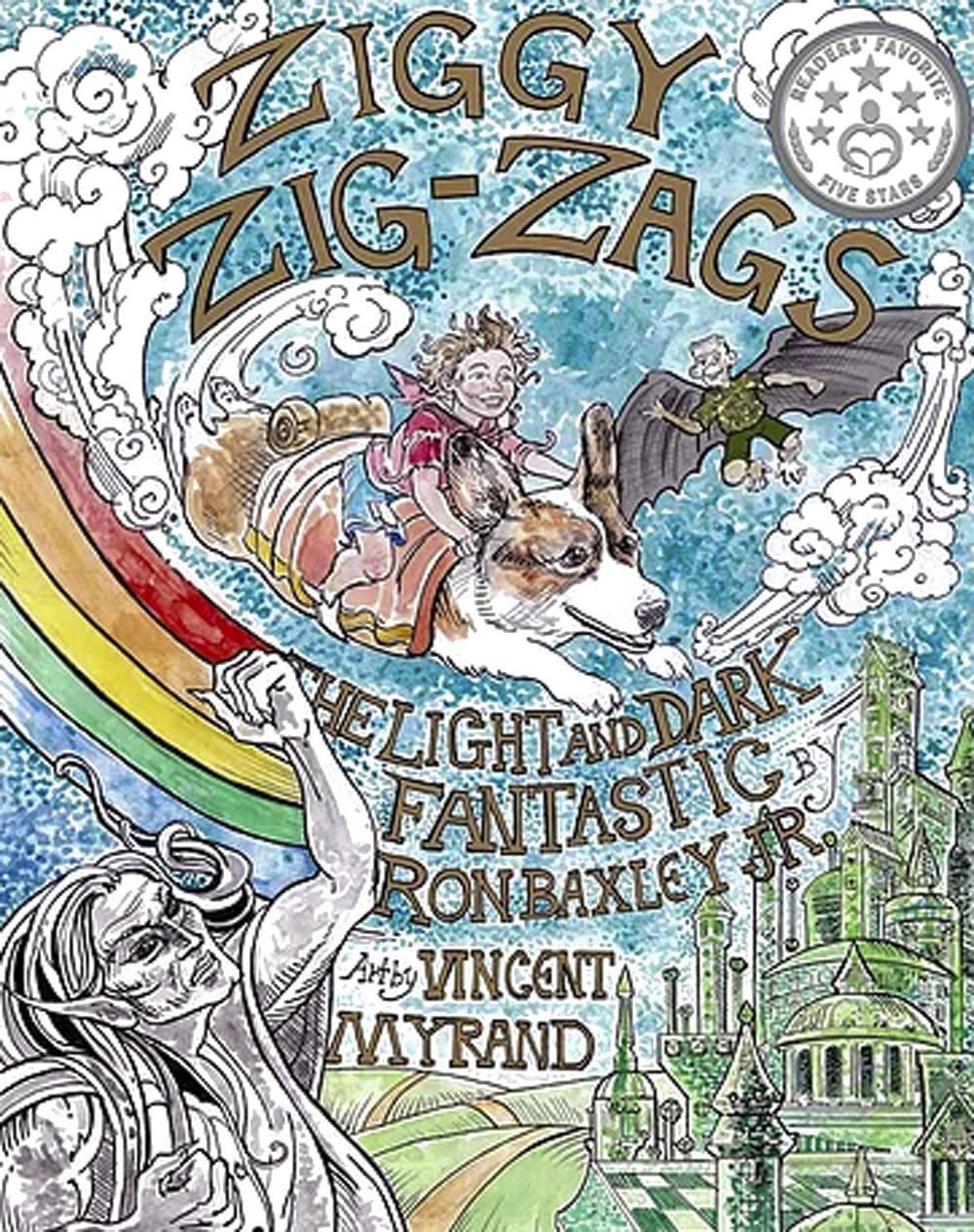 Many Corgi and graphic novel fans will be attending the presentation and book debut signings of Baxley’s “Ziggy Zig-Zags the Light and Dark Fantastic, Volume 1.” Baxley’s shelter-adopted emotional support Corgi, Ziggy, upon whom his fantasy graphic novel is based.

Baxley and Ziggy will be at The Book Tavern on Broad Street in Augusta on Saturday, July 27, from 11 a.m. to 3 p.m.

At The Book Tavern signing, Baxley invites guests to try a coffee or juice from the New Moon Café directly across from the store.

“Ziggy” stars a character based upon Ron’s Corgi, Ziggy, as the dog travels through Oz and Neverland and other fairy tale dimensions on a quest to save various characters. Ziggy, like many Corgis, as the Welsh legends go, started as a steed or horse for the elves and faeries.

Jack Magnus of Readers Favorite LLC gave “Ziggy” a five-star review: “Baxley’s admiration for the breed, after he adopted his rescued Pembroke Corgi, shines out on every panel of this enthralling two-story graphic novel. Vincent Myrand’s marvelous illustrations really capture the dog’s facial expressions as he considers his challenges and gets past all manner of obstructions and dangers. I loved revisiting Neverland, and a quick trip to Oz was a rare treat indeed. Baxley’s stories are well-plotted and exciting.”

Baxley, a former educator of 15 years, is a correspondent with The Times and Democrat. He has nationwide appeal and recognition with his multiple Oz-universe-set books, including at the Oz-Stravaganza Festival in Chittenango, New York, birthplace of “Wizard of Oz” author L. Frank Baum; the Michigan Wizard of Oz Festival; and other nationwide festivals and conventions.

"For nearly a decade, Oz-Stravaganza and the International L. Frank Baum and All Things Oz Historical Foundation have recognized my contributions to the Oz universe,” Baxley said. “I was honored by Marc Baum for the first edition of my first Oz book, ‘The Talking City of Oz’ (1999). Nine years ago, he invited me to attend as a visiting author at Oz-Stravaganza. I was also given a lifetime membership to the aforementioned foundation in 2016 because of my contributions to Oz fiction.”

Ziggy just had a pre-publication debut at the 2019 Oz-Stravaganza on May 31-June 2. It also debuted nationally at the Michigan Oz Festival in Ionia, Michigan, on June 21, where Ron was also recognized.

Baxley has also co-authored other Oz/Wonderland books with James C. Wallace II, with illustrations by Gwendolyn Tennille, and has authored other Oz books on his own beyond “The Talking City of Oz.” Baxley first met Vincent Myrand, the illustrator for the Ziggy graphic novel, at Oz-Stravaganza in 2015 and eventually hired him as the artist for two Ziggy graphic novels (Volume 2 is tentatively scheduled for a June 2020 release). Ali Tavakoly, who did the lettering and layout for this graphic novel, is also better known as a letterer for both DC Comics and Marvel Comics.

“Ziggy Zig-Zags the Light and Dark Fantastic, Volume 1” is Ron’s second book with YBR Publishing LLC. His first, “O.Z. Diggs Himself Out,” was published in 2018, and also features the same “Ziggy” Corgi character. The stores are stocked with the “O.Z. Diggs Himself Out” title, and Ron will have extra copies to sign and sell. Ron will also be bringing copies of the Ziggy graphic novel, which have been pre-signed by the illustrator and will be signed by Ron at the events. He will also have original artwork from the “Ziggy” graphic novel to sign and sell.

Copies of Ron’s book can be found at ybrpub.com (autographed) as well as on Amazon.

Authors Across the River: Event in North features regional writers

Author Ron Baxley Jr. poses with his Corgi, Ziggy, upon whom his new graphic novel is based.