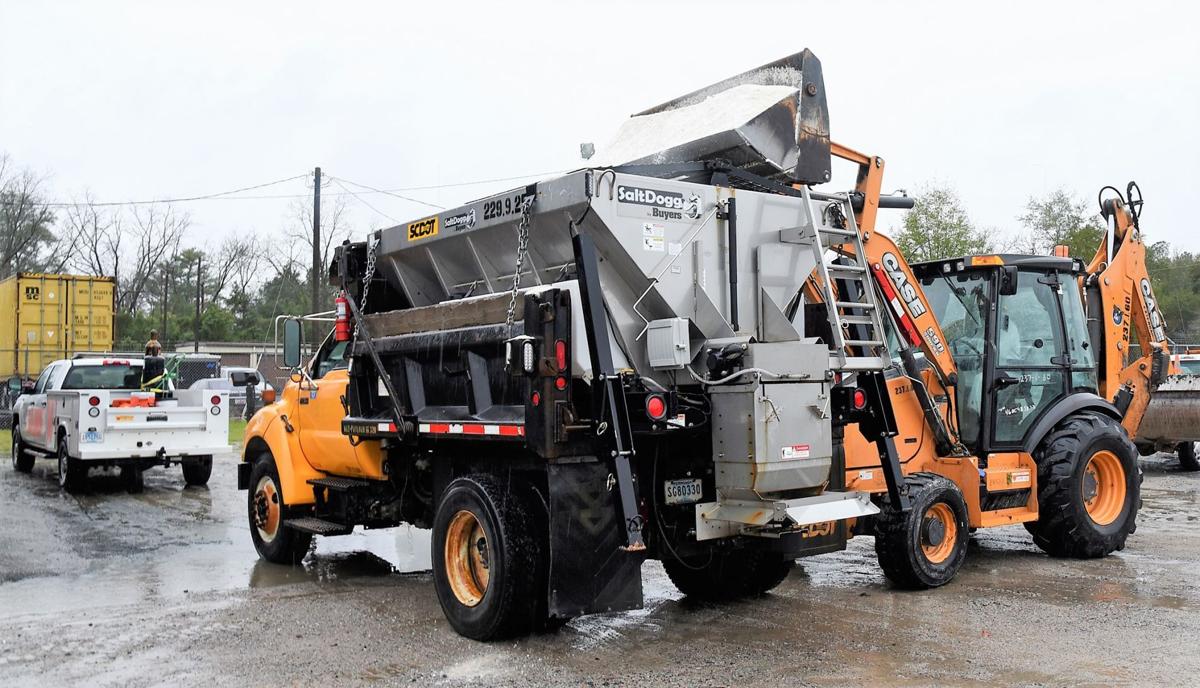 The S.C. Department of Transportation reports its employees are prepared to work around the clock and use all available resources to ensure motorists are as safe as possible when traveling the state’s roads and bridges. SCDOT employees are pictured loading salt in preparation for a winter storm. 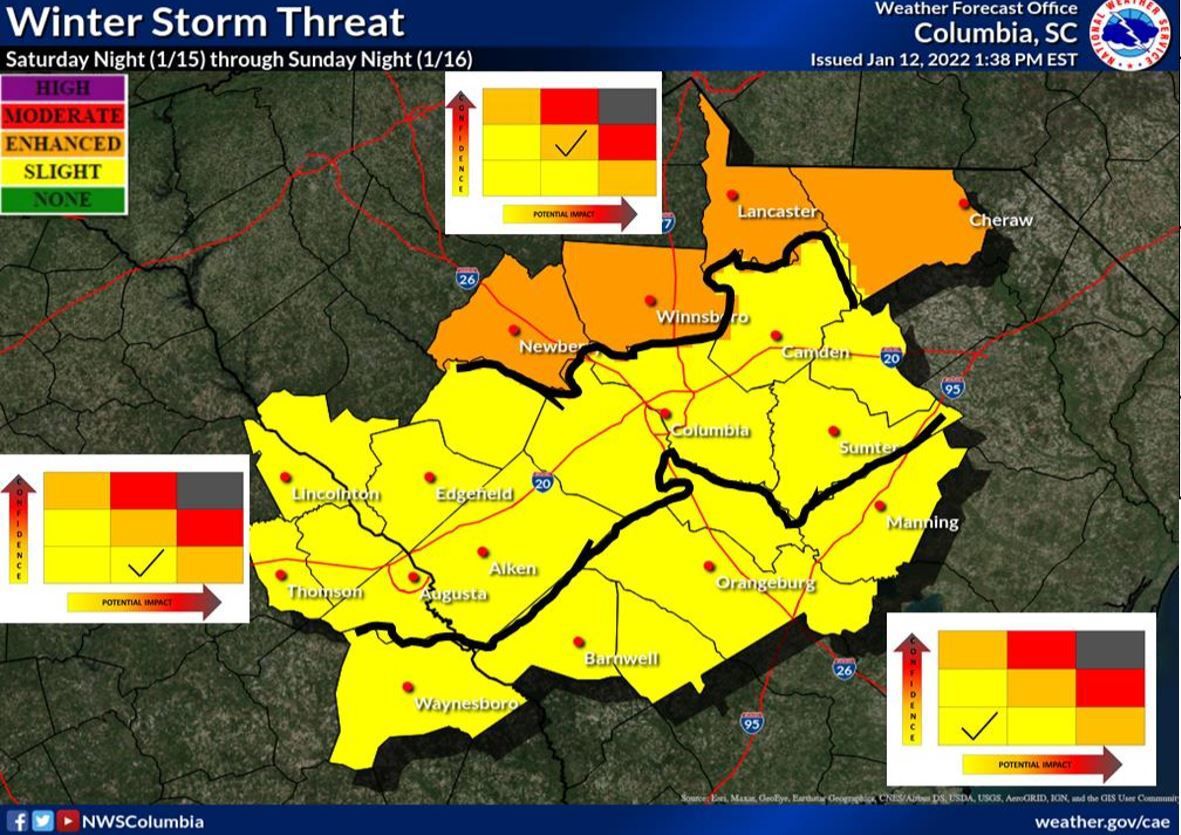 This National Weather Service graphic shows the region faces a slight risk of a winter storm.

There’s a smaller possibility of snow this weekend than originally forecast, but local emergency, utility and transportation officials are preparing for whatever Mother Nature will bring.

“This situation has a chance to be very impactful on the community,” Orangeburg County Emergency Services Director Billy Staley said.

He asked the public to “stay vigilant.”

“If this turns into an ice event, make sure you are prepared for power outages,” Staley said. “We are making sure all equipment is up where it is supposed to be and that personnel are ready.

“The forecast is very dynamic and is changing a lot. The impacts vary from rain to ice to snow. Right now we are preparing for all of it.”

While the weekend forecast once called for the possibility of snow, it changed Wednesday to show The T&D Region can expect largely a cold rain event. There is a limited risk for ice and freezing rain, especially for Calhoun County, central and western Orangeburg County, and northwestern Bamberg County.

The chance of snow disappeared entirely from the Orangeburg forecast, though a rain and snow mix was still forecast for St. Matthews early Sunday morning from about 5 a.m. to 8 a.m.

No snow is forecast for Bamberg County.

“Areas along and north of I-20 are more likely to receive winter weather than areas south of I-20,” the National Weather Service stated in a weather brief released Wednesday afternoon.

Staley said by Friday there should be a better understanding of what the area will receive.

He encouraged the public to monitor the forecast through the week.

The Orangeburg Department of Public Utilities was monitoring the weather Wednesday.

“We are evaluating staffing levels,” spokesman Randy Etters said. “We have quite a few employees out with COVID right now, so that will make it a tad bit challenging if we have an issue.”

“We found things we were able to get in four to six weeks and now it takes 35 to 40 weeks lead time for transformers,” Etters said. “We have concerns outside of our normal preparation this time due to COVID and inventory and supply chain issues.”

Etters said the utility has adequate supplies to handle a mild to moderate weather event. If a catastrophic event impacts its system, it may have to solicit transformers from places besides its normal suppliers.

Calhoun County Emergency Services Director David Chojnacki said, “I recommend everybody check their equipment, make sure they are fueled and ready to go and to keep a close eye on the weather.”

“Emergency management is ready to go if we are needed,” he said. “I spoke with the fire departments and they are preparing now. EMS is prepared.”

The S.C. Department of Transportation is loading up its spreaders and snow plows, Resident Maintenance Engineer Walt Holladay said

He said the department is also reevaluating its personnel.

“COVID has hit everyone pretty hard,” Holladay said. He added that the department does have enough personnel to cover a weather event.

Forecasters are looking at a number of scenarios. Questions remain about the timing of cold air and precipitation, and there are also some indications that warmer air will also be moving into the area.

A 25-year-old Orangeburg man has been identified as the person who died in a motel parking lot just after 1 a.m. Sunday.

A 20-year-old Bamberg man is accused of having sex with a 15-year-old girl and recording it, according to Bamberg County Sheriff’s Office warrants.

Authorities are working to identify the man shot and killed in a motel parking lot just after 1 a.m. Sunday.

The T&D Region could see a half-inch of snow this weekend.

Department of Labor: $16,127 recovered from gin

The U.S. Department of Labor says it recovered $16,127 from a Cope cotton gin.

Various parts of Orangeburg lost power on Thursday, making it a little more difficult to navigate the city’s streets.

Officials say the company did not purchase the property. Find out more at: https://thetandd.com/news/local/ceo-flybar-not-coming-announcement-…

‘Parade of Champions’: SCSU Bulldogs to celebrate at Sunday event

South Carolina State University will celebrate numerous recent achievements, including winning the HBCU National Championship, in a “Parade of…

A 42-year-old Neeses man pleaded guilty to second-degree criminal sexual conduct with a minor under 16 years of age.

The S.C. Department of Transportation reports its employees are prepared to work around the clock and use all available resources to ensure motorists are as safe as possible when traveling the state’s roads and bridges. SCDOT employees are pictured loading salt in preparation for a winter storm.

This National Weather Service graphic shows the region faces a slight risk of a winter storm.