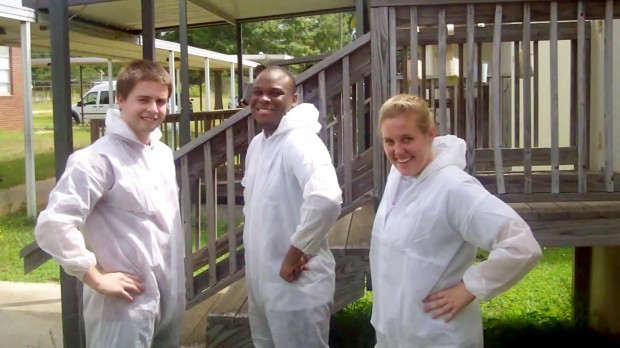 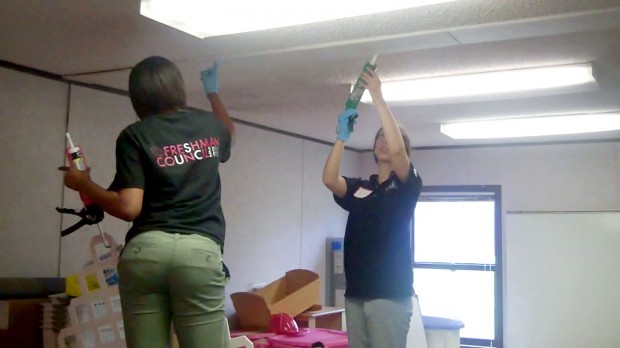 Students, faculty and staff from the University of South Carolina were among those who worked on a weatherization project at Denmark-Olar Elementary School on Saturday, July 28. They conducted a blower door and infrared test, then air-sealed the spaces that the tests identified using caulk, weather-stripping and spray foam.

DENMARK — Students, faculty and staff from the University of South Carolina, along with representatives from Retrotite, EnergyMan LLC and Conservation Voters of South Carolina, participated in a weatherization project at a Denmark school on Saturday, July 28.

Denmark-Olar Elementary, which is located in the so-called “Corridor of Shame,” was chosen for the project designed as a first step in making the facility more energy efficient.

The Conservation Voters of South Carolina began the Green Schools initiative to focus on rural school districts along the I-95 corridor which are often overlooked.

At Denmark-Olar Elementary, volunteers conducted a blower door and infrared test and air sealed the spaces that the tests identified using caulk, weather-stripping and spray foam. They also were taken on a tour of the entire school, and they said what they saw amazed them. The volunteers expressed how passionate they felt about improving the schools and how committed they were to coming back to participate in more projects.

“Seeing this many people show up on a hot Saturday to donate their time and energy in order to create a better learning environment for children that they don’t even know warms my heart,” said Jenni Asman, program manager of the Conservation Voters of South Carolina Green Schools Initiative.

“Initially, the idea of weatherizing a school was a scary thought because of all the time it would require of our experts here today. However, having volunteers such as the faculty, staff and students of the university allows us not only to reduce cost; it also allows us, as a group, to make a greater impact in a shorter amount of time.”

Asman added, “There are benefits for the volunteers as well that go beyond feeling good about giving back. Some of the students here today wish to have a career in education and want to get a first-hand look at the state of schools in South Carolina. “

As a part of the Green Schools Initiative, Asman will meet with the Bamberg School District Two Board of Trustees in two weeks to ask them to accept a loan from the state energy office called the ConserFund, which would allow the district to waive up-front costs of more intensive projects such as a new HVAC system, new windows, lighting upgrades in the halls and exterior and more.

Asman said she hopes when combining this loan, which requires the applicant to pay 2 percent interest annually with generous SCE&G rebates, that the district will be able to pay off the loan with its savings.

A 22-year-old Orangeburg woman pleaded guilty to accessory after the fact to a felony.

A 38-year-old Orangeburg man was shot multiple times in his car in the Cope area, according to an Orangeburg County Sheriff’s Office incident report.

Pedestrian dies after I-26 crash in Calhoun County

A 32-year-old pedestrian died Friday after being struck by an SUV on Interstate 26, according to S.C. Highway Patrol Lance Cpl. Nick Pye.

The Orangeburg County Christmas Parade will be held at 4 p.m. Sunday, Dec. 5.

Football in exile: Afghan sportswomen get back into the game

Football in exile: Afghan sportswomen get back into the game

Do you ever wonder why rain smells so good?

Do you ever wonder why rain smells so good?

Students, faculty and staff from the University of South Carolina were among those who worked on a weatherization project at Denmark-Olar Elementary School on Saturday, July 28. They conducted a blower door and infrared test, then air-sealed the spaces that the tests identified using caulk, weather-stripping and spray foam.