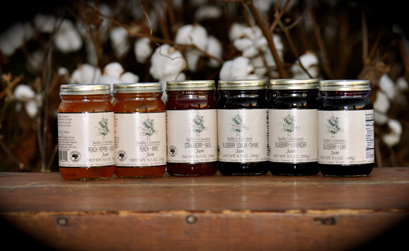 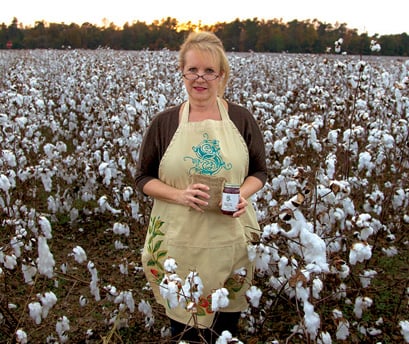 Sallie Porth stands in the cotton field next to her Cameron home. Starting with strawberries and blueberries to create her herbal jams, Porth already has plans to branch out. “I do have several other flavors we will be bringing to market in 2011,” Porth said. “All are just as delicious as the current lineup.”
By PHIL SARATA, T&D Staff Writer

CAMERON - For Cameron native Sallie Porth, putting up preserves started out as a hobby and "stress relief." That hobby has morphed into much more.

Porth was taught the fine kitchen art by her mother and mother-in-law, and began preserving food seven years ago.

"My husband is big into gardening," said Porth, who returned to Calhoun County six years ago after a career in medical sales. "He plants a huge garden, but it bothered me to see not all of it was being used.

"I got bored making just traditional fruit jams, so I started experimenting. Fortunately, I was exposed to gourmet dining throughout my travels, and I always do research before I try anything."

The results have been delicious and profitable. Porth started Sallie's Greatest after being named finalist in Charleston-based Garden & Gun Magazine's "Made in the South" contest. The winners were announced in the November edition.

Porth launched the herbal jam company that same month, which she committed to do by entering the contest. She said 95 percent of her sales have been online. So far, Porth said, "I've not had any failures."

"It's been totally amazing, beyond anything we had ever imagined," Porth said. "Our hot sellers have been the strawberry basil, but people are buying the full lineup."

Garden & Gun's description of Porth's products has launched Internet orders from coast to coast: "Trust us, when you open a jar of Sallie Dent Porth's fresh-from-a-South-Carolina-field Strawberry Basil Jam, you'll want to slather it all over everything from Camembert and crackers to hot biscuits at breakfast."

Monty Rast of Cameron is Porth's longtime friend, neighbor and business partner. A subsidiary of Rast's Longview Acres, Sallie's Greatest gets its fresh produce from Rast.

"She started with strawberries from my patch on Cannon Bridge Road," Rast said. "I told her she ought to enter the Garden & Gun contest because it featured new concepts and new start-up businesses.

"She said, ‘If you will partner with me, we can put together the story of how I got interested and what you do in the farming area.'"

Stephen Roland, a Cameron native who now lives in Mount Pleasant, helped build the website - salliesgreatest.com - for Porth's new enterprise. A former employee of Porth's at IntegraMed, Roland said he urged her to pursue the business.

"She handed me a jar of her jam and pickled okra after I finished interviewing with her," Roland said. "I knew I wanted to work for her after that."

Mary Jo Spiers of Cameron said it's "unbelievable" what Porth has accomplished.

"When you first taste her jams, it's so different and perfect to serve at any get-together," Spiers said. "I used them at my beach house, putting them on cream cheese and different types of crackers and breads, and in the morning with my cheese biscuits.

"They also create a great condiment and a marinade for venison tenderloin. We baked it right in, and it really brought out the flavor of the meat."

One of the selling points for Porth's products involves utilizing the fresh, local produce Rast provides. He said that factor plays directly into the latest trend in agriculture.

"Local, fresh and sustainability is involved in almost every conversation about food now," Rast said. "This satisfies the emerging locavores, which are people who commit to eating local foods as much as possible.

"It also fulfills Sallie's passion and helps me utilize my berries more efficiently. She's also developing new products using figs, corn and sweet onions. We'll be planting onions and herbs for use in the jams, too."

Porth said the new business has invigorated her.

"We sold more than half of our initial projection in this short period of time," Porth said. "The response has been amazing, and my hope and prayer is the momentum will continue."

Traffic checkpoints in Orangeburg on Saturday

Traffic checkpoints will take place at various locations in and near Orangeburg on Saturday, April 10.

'Something you don't want to ... go through': Edisto baseball player, 14, dies in ATV accident

EUTAWVILLE – Investigators are working to determine how a set of human skeletal remains ended up in a wooded area off of Nelson Ferry Road, ne…

Orangeburg 7-year-old stable after being hit by vehicle

A body discovered in a field near St. George back on Sept. 13, 2020, has been identified as a man reported missing in Orangeburg County a mont…

A man suspected of robbing a Eutawville gas station early Thursday morning remains on the run, according to Eutawville Police Chief Frankie Thompson.

Brenda Austin has a charming personality that has endeared her to many in her community with whom she has worked in a variety of capacities.

Sallie Porth stands in the cotton field next to her Cameron home. Starting with strawberries and blueberries to create her herbal jams, Porth already has plans to branch out. “I do have several other flavors we will be bringing to market in 2011,” Porth said. “All are just as delicious as the current lineup.”
© Copyright 2021 The Times and Democrat, 1010 Broughton Street Orangeburg, SC | Terms of Use | Privacy Policy
Powered by BLOX Content Management System from TownNews.com.
You don't have any notifications.